A set of five embryo-like structures in a microfluidic device developed in the lab of Jianping Fu. The top row consists of “immunostaining” images in which key proteins are tagged with dyes to label different cell types, whereas the bottom row shows standard photos taken through a microscope. Parts of the bottom images were blurred to more clearly show a correlation between the rows. Image credit: Fu Lab, Michigan Engineering

The technique, developed at the University of Michigan, imitates stages in embryo development that occur shortly after implantation in the uterus. This is when the amniotic sac begins to form and when the stem cells that would go on to become the fetus take their first steps toward organization into the body. The embryo-like or “embryoid” structures don’t have the potential to develop beyond small colonies of cells.

The system can reliably produce hundreds or thousands of embryo-like structures needed to determine whether a medicine is safe for a pregnant woman to take in very early pregnancy, for instance.

The team terminated the experiments by the end of the fourth day.

What they did: Simulating parts of early embryo development

A team of engineers and biologists—led by Jianping Fu, an associate professor of mechanical engineering—coaxed stem cells into organizing and behaving in ways that resemble aspects of embryonic development. They developed these three models:

Embryoid models No. 2 and 3 only contain a portion of the epiblast cells that are present in an actual embryo. The posterior model doesn’t contain anterior cells, and vice versa.

Why it’s important: Answering questions about drug safety and infertility

“Our stem cell structures that mimic embryos can help fill critical gaps in knowledge about early human development, and that could lead to a lot of good,” Fu said.

“This research could give us a window into the pivotal but barely observable period between two and four weeks after conception. This is a time when many miscarriages happen, and serious birth defects can form. Scientists have even begun to find connections between late-onset diseases and early development. We need to understand these processes better if we’re ever going to develop preventative measures.” 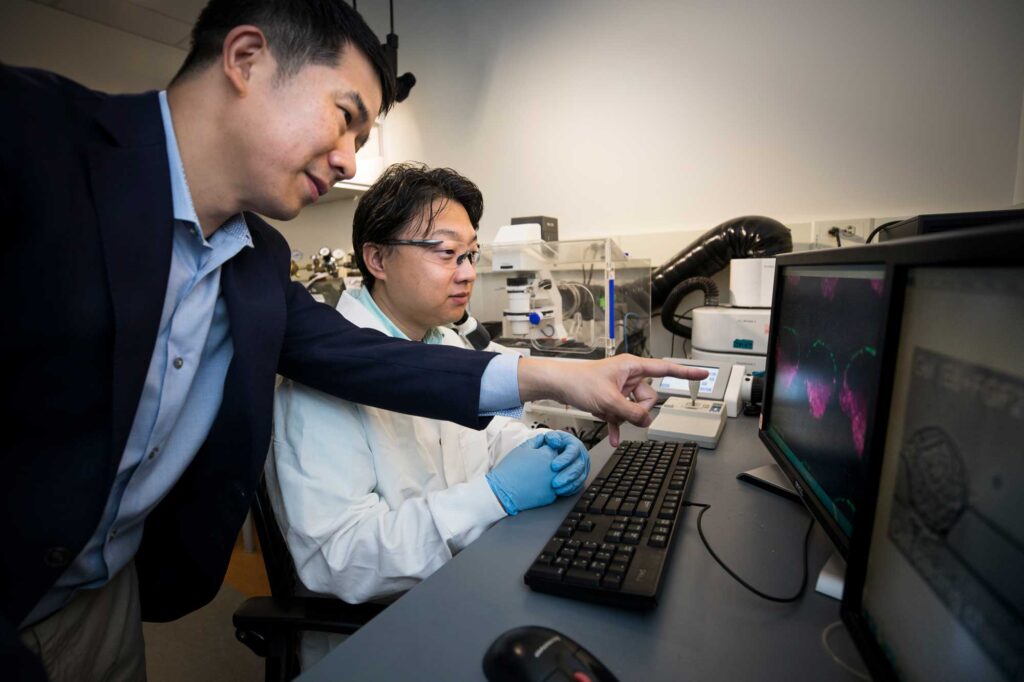 The most accurate insights about human development have come from limited studies with large animals or complete human embryos. It’s not possible to do those at a large enough scale for applications like chemical and medication screening. Fu says the new system is ready to screen medications for safety in early pregnancy.

“Our lack of knowledge about how medications affect embryo development is a serious public health problem,” he said.

A study cited by the Centers for Disease Control and Prevention found that of the 54 most common medications pregnant women use in the first trimester, 63% had “very limited to fair” risk data. And only 4% had “good to excellent” data.

If the team can continue this line of research, it could also give insights into the causes of some birth defects, or congenital disabilities. For example, in anencephaly, parts of the brain and skull don’t develop. It’s fatal. In spina bifida, the spinal cord is damaged, in some cases resulting in severe disabilities. And 40,000 births per year are affected by congenital heart defects.

Because the system works with reprogrammed adult cells (as well as embryonic stem cells), it may also be able to shed light on infertility. At present, 30% of couples who seek fertility treatment don’t receive an explanation for why they haven’t conceived.

“This work provides a controllable and scalable experimental platform to ask important questions related to human development and reproduction,” Fu said. “Our findings demonstrate that human development is very different from other mammals. Different signaling pathways are involved. So this is the only way right now to accurately study human development without using intact human embryos.”

How they did it: A microfluidic system that allows stem cells to self-organize 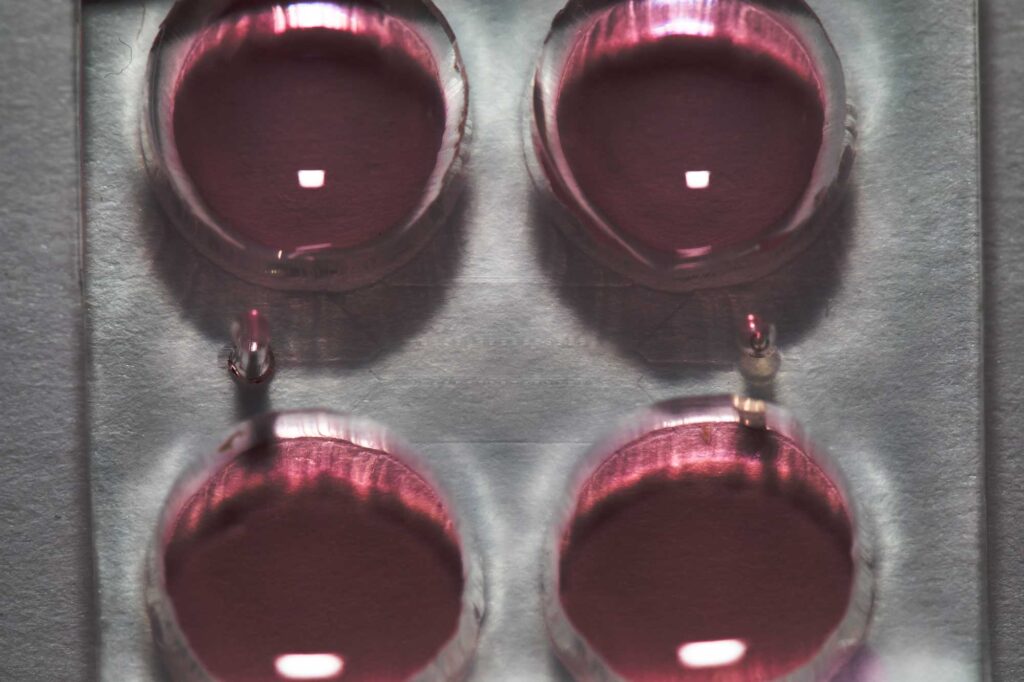 To generate the three models, the team grew stem cells in a scalable microfluidic system of three channels. The central channel contained a gel that mimicked the wall of the uterus, and it was flanked by a channel for feeding in stem cells and another for chemical signals that guided the development of the cells.

“In conventional 3D cultures, less than 5% of the stem cell clusters would form embryo-like structures,” Fu said. “With this microfluidic system, which gives us a handle to precisely control the culture environment, we can achieve above 90% efficiency for generating such embryo-like structures.”

The stem cells loaded into the microfluidic device first grew into colonies that naturally became hollow balls. Then, the balls burrowed into the gel, similar to the way that an early embryo implants in the wall of the uterus. This stage comprises the first model.

To generate the second model, the researchers loaded into the microfluidic device chemical signals that triggered the stem cells on one side of the ball to turn into amniotic sac cells. The stem cells on the other side grew taller and thinner, crowding together, as is expected in the epiblast—the group of cells that would eventually go on to form the fetus. The amniotic cells released signaling molecules that guided the stem cells on the other side of the ball to differentiate into cells resembling the rear end of an epiblast. These models also began forming primordial germ cells. In an actual embryo, those become sperm and eggs.

To generate the third model, the researchers added to the microfluidic device molecules that block the undifferentiated epiblast cells from evolving into rear epiblast cells. This mimics a signal that arises in real embryos. This model represents the upper end of the epiblast, which remain undifferentiated at this stage.

The research was funded by the U-M Mechanical Engineering Faculty Support Grant, Michigan-Cambridge Research Initiative, University of Michigan Mcubed Fund, National Institutes of Health and California Institute of Regenerative Medicine. Co-authors of this work include Deborah Gumucio, the James Douglas Engel Collegiate Professor and a professor emerita of cell and developmental biology at U-M, and Johnathon Lakins and Valerie Weaver of the University of California, San Francisco.