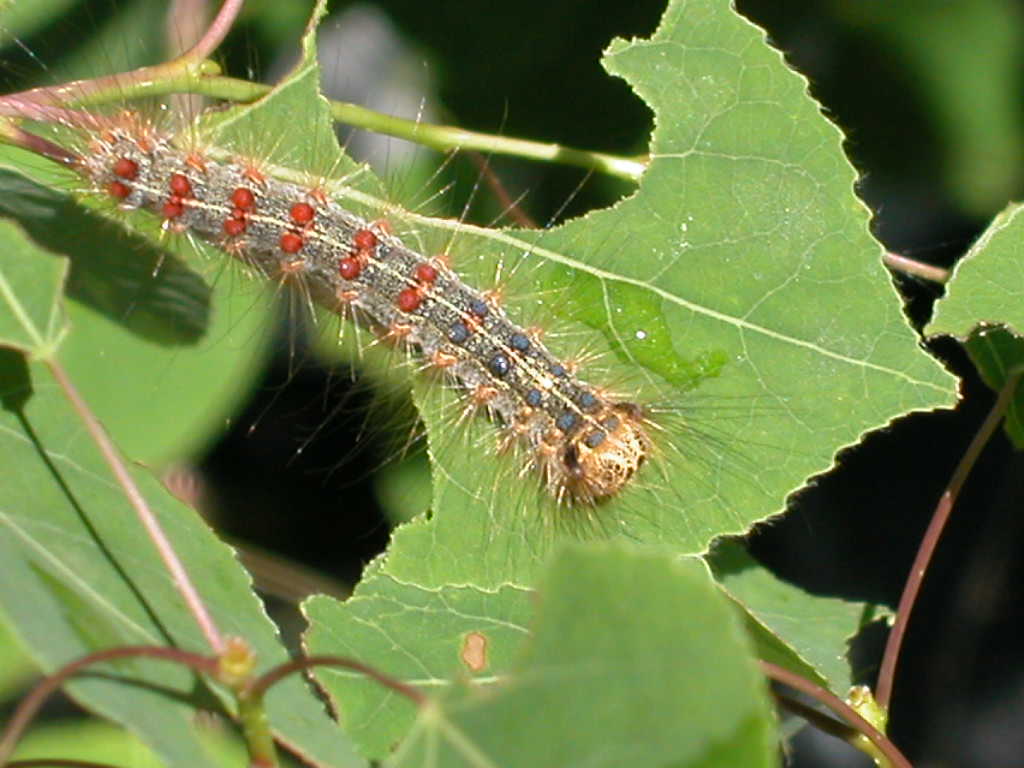 A gypsy moth caterpillar. Photo courtesy of Richard Lindroth.ANN ARBOR—Working beneath the towering oaks and maples on the University of Michigan’s central campus Diag, undergraduate researchers and their faculty adviser helped explain an observation that had puzzled insect ecologists who study voracious leaf-munching gypsy moth caterpillars.

The caterpillars, which defoliate and sometimes kill stands of trees in the Upper Midwest and the Northeast, are especially fond of oaks, but sugar maple trees appear to be relatively resistant to the European pest.

Biologists wondered whether the caterpillars shun sugar maples in part because their leaves are less nutritious than the leaves of other trees. To find out, U-M biochemist Ray Barbehenn and several of his undergraduate research assistants compared the protein quality of red oak and sugar maple leaves from trees on the Diag.

What they found runs counter to conventional wisdom on the topic, which states that protein quality in leaves differs significantly from species to species. Instead, Barbehenn and his students found that the amino acid composition of the proteins in red oak and sugar maple leaves is strikingly similar—so similar, in fact, that they could not be distinguished during the spring, when gypsy moths do most of their feeding.

However, the researchers found that protein is more abundant in oak leaves than in maple leaves. 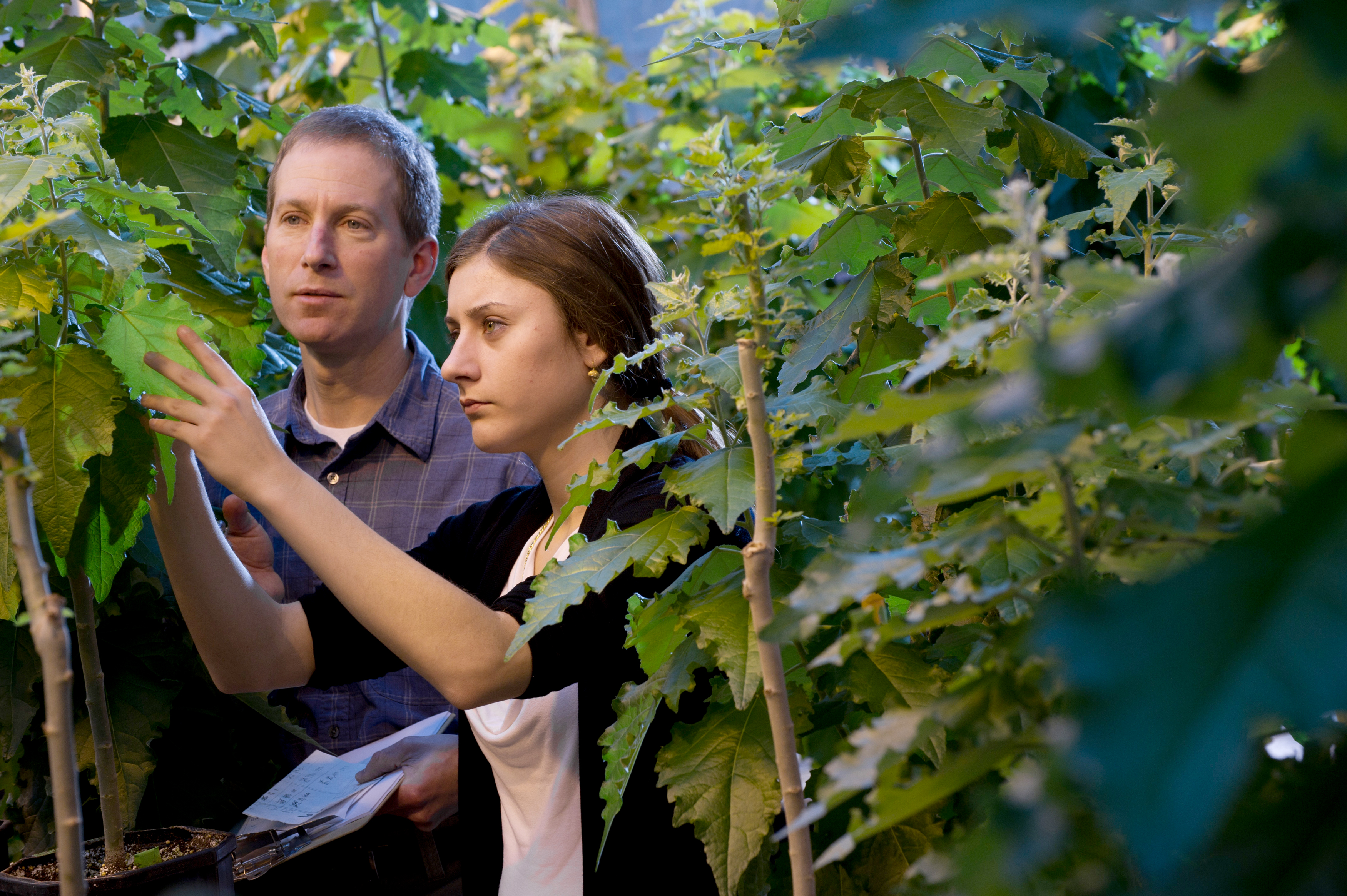 U-M biochemist Raymond Barbehenn and honors student Cristina Pecci inspect poplar trees inside the Natural Sciences Building greenhouse. Photo courtesy of the U-M Office of Undergraduate Admissions.Instead of differences in protein quality, we showed that maple trees have lower quantities of protein than oak, partly explaining why they are less nutritious than oak leaves,” said Barbehenn, an associate research scientist in the Department of Molecular, Cellular and Developmental Biology and Department of Ecology and Evolutionary Biology. The amount of essential amino acids in oak leaves was 30-42 percent higher than the EAA content of maple leaves in the spring and summer.

“These results help us understand the nutritional reasons why insects perform better or worse on different species of plants. This kind of information is needed in agriculture and forestry to improve the resistance of plants to insect pests,” he said. “In the short term, though, this is basic research that is driven by the curiosity of ecologists to understand nature better.”

Niewiadomski graduated from U-M with a bachelor’s degree in biology in May 2010 and is now studying nutrition in a doctoral program at Cornell University. She said her work studying protein metabolism in gypsy moth caterpillars shaped her decision to pursue a doctorate in nutrition.

“My career in nutrition research began in Ray’s lab,” she said. “I am looking forward to seeing where it leads me.”

Kochmanski is now a master’s student at the U-M School of Public Health, focusing on toxicology. He said his time with Barbehenn instilled in him “a strong desire to continue doing research.”

“I am currently working in a toxicology laboratory at the School of Public Health, doing research into the human health effects of environmental exposures,” he said. “I can trace my interest in this subject back to my time working in Ray’s lab.”

“Our research involves a true partnership,” Barbehenn said. “I teach students to work and think like biologists, and they help me get publication-quality data,” he said. “For almost all of them, it’s the first time they’ve had this opportunity and the first publication they’ve co-authored.” 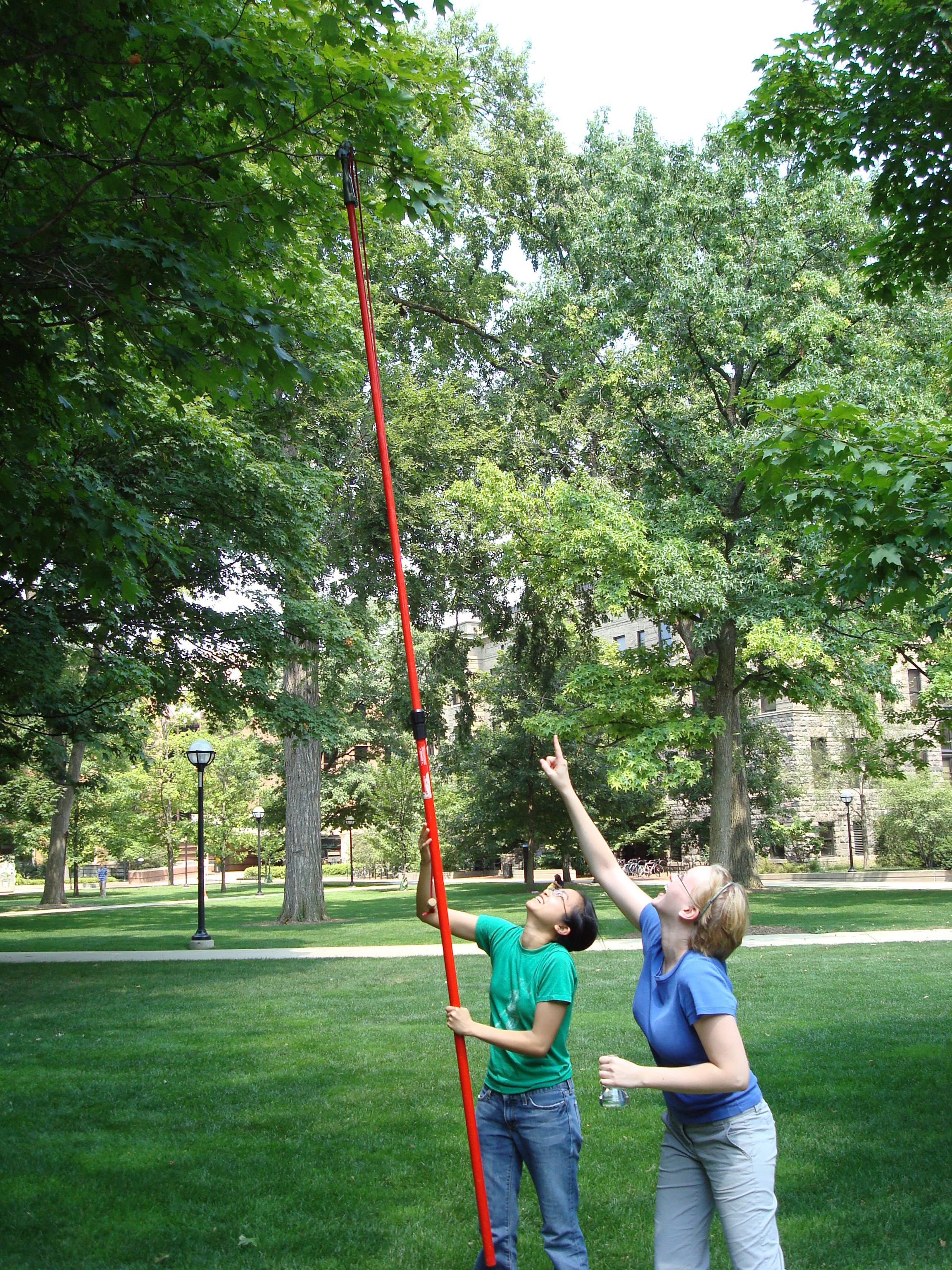 University of Michigan student research assistants Grace Lee (left) and Cara Mozola cut sugar maple leaves on the Diag as part of a study of leaf protein quality and gypsy moth caterpillars. Photo courtesy of U-M Undergraduate Research Opportunity Program.In the gypsy moth study, the students used a long-pole pruner to reach into the crowns of Diag oaks and maples and collect leaves. The field work was done in 2010, with permission from U-M Grounds Services.

In the nearby Natural Sciences Building, the research team used high-performance liquid chromatography to separate and quantify the amino acids that make up proteins. The whole-body essential amino acid composition of gypsy moth caterpillars was measured to estimate their optimum dietary protein composition, which was compared with the EAA compositions of oak and maple leaves.

“The ability to literally walk out the door to work on tree defenses against pests like the gypsy moth, coupled with an abundance of undergraduate talent, makes the U-M campus an ideal location for studies in insect chemical ecology,” Barbehenn said.

The protein study showed that gypsy moths would have to devour more maple leaves than oak leaves to achieve the same amount of nourishment. But earlier work by Barbehenn and his students showed that the toxicity of maple leaves may prevent this strategy from working.

Studies conducted on the U-M campus between 2005 and 2009 showed that sugar maple leaves produce much higher levels and more types of toxic chemicals called tannins for their defense than do red oak leaves. Tannins and other toxic chemicals provide the major strategy that plants have evolved to defend themselves against attack by insects.