This false-color microscopic image shows cancer cells selectively adhering to patterned nanorough letters (UM) on a glass surface. Image credit: Weiqiang ChenANN ARBOR—A glass plate with a nanoscale roughness could be a simple way for scientists to capture and study the circulating tumor cells that carry cancer around the body through the bloodstream.

Engineering and medical researchers at the University of Michigan have devised such a set-up, which they say takes advantage of cancer cells’ stronger drive to settle and bind compared with normal blood cells.

Circulating tumor cells are believed to contribute to cancer metastasis, the grim process of the disease spreading from its original site to distant tissues. Blood tests that count these cells can help doctors predict how long a patient with widespread cancer will live.

As important as the castaway cells are, scientists don’t know a lot about them. They’re rare, at about one per billion blood cells. And they are not all identical, even if they come from the same tumor. Existing tools for isolating them only catch certain types of cells—those that express specific surface proteins or are larger than normal blood cells.

For example, the commonly used, FDA-approved CellSearch system uses antibody- coated magnetic beads to seek out tumor cells and bind to them. But not all circulating tumor cells express the proteins these antibodies recognize. It is possible that the most dangerous ones, known as cancer stem or progenitor cells, may have shed that tell-tale coat, thereby evading approaches that rely on antibodies.

The researchers say their system could likely trap these stealth cancer stem cells—a feat no research team has accomplished yet.

“Our system can capture the majority of circulating tumor cells regardless of their surface proteins or their physical sizes, and this could include cancer progenitor or initiating cells,” said Jianping Fu, assistant professor of mechanical engineering and biomedical engineering and a senior author of a paper on the technique published online in ACS Nano.

Fu and his engineering colleagues teamed up with U-M senior cancer researcher and breast cancer clinician Dr. Sofia Merajver and her team. This multidisciplinary group believes that while the device could one day improve cancer diagnosis and prognosis, its first uses would be for researchers to isolate live circulating tumor cells from blood specimens and study their biological and physical properties.

“Understanding the physical behavior and nature of these circulating tumor cells will certainly help us understand better one of the most difficult questions in cancer biology—the metastatic cascade, that is, how the disease spreads,” Fu said. “Our system could provide an efficient and powerful way to capture the live circulating tumor cells and use them as a surrogate to study the metastatic process.”

But capturing them, as challenging as it has proven to be, is only the beginning, said Merajver, who has spent the last 18 years studying cell signaling and the physical properties of highly aggressive cancer cells.

“The application of integrative biology is necessary to put together the story of how these cells behave in time to achieve successful metastases and thereby discover the routes to suppressing this deadly development,” Merajver said. “Our collaboration with the Fu lab exemplifies the innovation needed for the war against cancer—team science from the lab all the way to the clinic.” 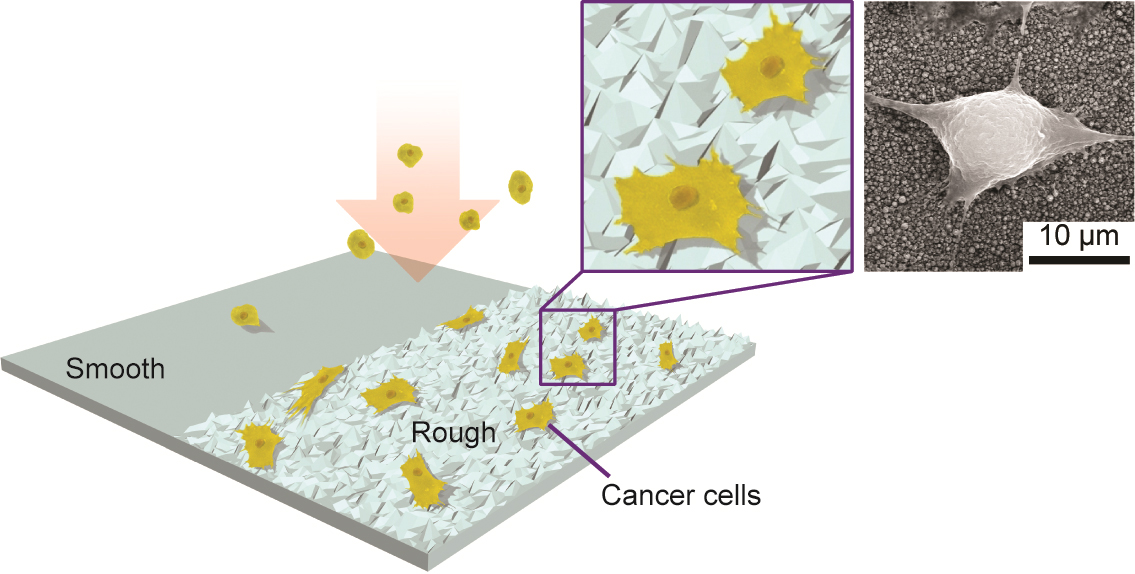 University of Michigan researchers have devised a way to capture for study the circulating tumor cells believed to lead to the spread of cancer. They’ve developed a nano-roughened glass plate that the cancer cells adhere to at greater rates than non cancerous cells. Image credit: Weiqiang ChenIn their experiments, the researchers used a standard and inexpensive microfabrication technique called “reactive ion etching” to roughen glass slides with a nanoscale resolution. Then, they spiked different blood samples with cancer cells derived from human breast, cervical and prostate tissues. When they poured the samples over the glass plates, the nanorough glass surfaces captured an average of 88 percent to 95 percent of the cancer cells.

“Blood cells are intrinsically floating,” Fu said. “Cancer cells including circulating tumor cells derived from solid tumors are presumably adherent cells. They can escape from the primary tumor while maintaining certain adhesion properties that allow them to attach and establish another tumor.”

“Our method presents a significant improvement as it can be applied in principle to any cancer cell that comes from solid tumors,” Fu said.

The paper is titled “Nanoroughened Surfaces for Efficient Capture of Circulating Tumor Cells without Using Capture Antibodies.” The university is pursuing patent protection for the intellectual property and is seeking commercialization partners to help bring the technology to market.

The first author is Weiqiang Chen, a doctoral student in the U-M Department of Mechanical Engineering. Researchers from the Chinese Academy of Sciences in Shanghai and the City University of Hong Kong also contributed, along with others in the U-M College of Engineering and the U-M Medical School. The research was supported by the National Science Foundation, the UM-SJTU Collaboration on Biomedical Technologies, the U-M Comprehensive Cancer Center, the Michigan Institute for Clinical & Health Research and the U-M Department of Mechanical Engineering.