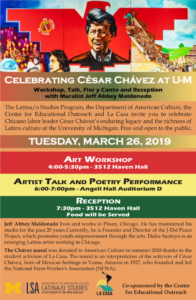 The University of Michigan will celebrate this year’s César Chávez Day with a free, public art workshop and talk/poetry performance by Chicano artist and muralist Jeff Abbey Maldonado.

“Latinx culture and student activism are thriving at the University of Michigan in Ann Arbor, and the legacy of César Chávez and the acquisition of a mural are perfect occasions for celebration,” said Lawrence La Fountain-Stokes, associate professor of American culture and interim director of the Latina/o Studies Program.

DETAILS: Maldonado is the artist behind the César Chávez mural that was donated to the U-M Department of American Culture last summer. It was previously displayed in the César Chávez Lounge at the Mosher-Jordan Student Residence Hall, home to the Michigan Research Community and the Women in Science and Engineering Residence Program.

The mural is an interpretation of the activism of Chávez, born of Mexican heritage in Yuma, Arizona, in 1927. Chávez founded and led the National Farm Workers Association, the first successful farm workers union in the country, later known as United Farm Workers.

During the 1950s and 1960s, Chávez worked for a self-help group, the Community Service Organization. He became a full-time organizer for the group, forming new chapters across California and Arizona. After serving as CSO national director, Chávez resigned his position to create his own organization to help farm workers. The UFW held boycotts and fasts to protest the treatment of farm workers worldwide.

Chávez, who died in 1993, said, “If you’re outraged at conditions, then you can’t possibly be free or happy until you devote all your time to changing them and do nothing but that.”

The university commissioned the mural in 1998. Maldonado hails from the Pilsen district of Chicago, a longtime port of entry for immigrants and today a thriving Mexican-American community where bold murals decorate storefront galleries, fronts of homes and train platforms.

Maldonado has worked in many schools as an artist-in-residence, teaching mural making. His work has been shown in Chicago-area galleries and museums, including the National Museum of Mexican Art, Chicago Cultural Center, The Field Museum, Chicago History Museum, and the Museum of Science and Industry.

Nationally, he has shown his work in New York City’s Arts forum Gallery and the United Nations Building, Detroit’s Chrysler Building, Indianapolis’ Eiteljorg Museum and venues in San Antonio, San Diego and Phoenix. Internationally, he has had gallery exhibits in Acapulco, Paris, Istanbul, Montreal and Nicaragua.