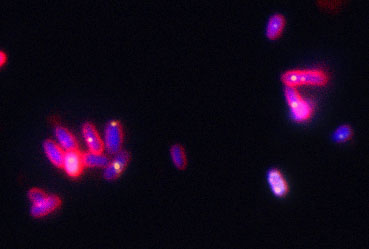 Proteins are the body’s workhorses, and like horses they often work in teams. There exists a modern day team of multiple chaperone proteins that help other proteins fold into the complex 3D shapes they must achieve to function. This is necessary to avert many serious diseases caused when proteins misbehave.

But what happened before this team of chaperones was formed? How did the primordial cells that were the ancestors of modern life keep their proteins folded and functional?

Scientists from the University of Michigan discovered that an extremely simple, ancient chemical called polyphosphate can perform the role of a chaperone. It likely played that role billions of years ago, and still keeps its old job today.

“Polyphosphate has likely been present since life began on Earth, and is thought to exist in all living creatures,” said postdoctoral researcher Michael Gray. “This means it’s extremely important, but no one really knew what it was for.

“We found that bacteria accumulate polyphosphate to defend against disease-causing, protein unfolding conditions. Purified polyphosphate works well to protect proteins in the test tube, showing that this simple chemical can substitute for the complex team of protein chaperones.”

The discovery unravels a long­standing evolutionary mystery that could lead to new strategies for treating protein folding diseases such as Alzheimer’s and Parkinson’s, which occur when proteins misfold or pile up.

“Once we know how to manipulate the levels of polyphosphate in cells and organisms, we should be able to improve protein folding and develop countermeasures against protein folding diseases,” said Ursula Jakob, the U-M professor in charge of the research.