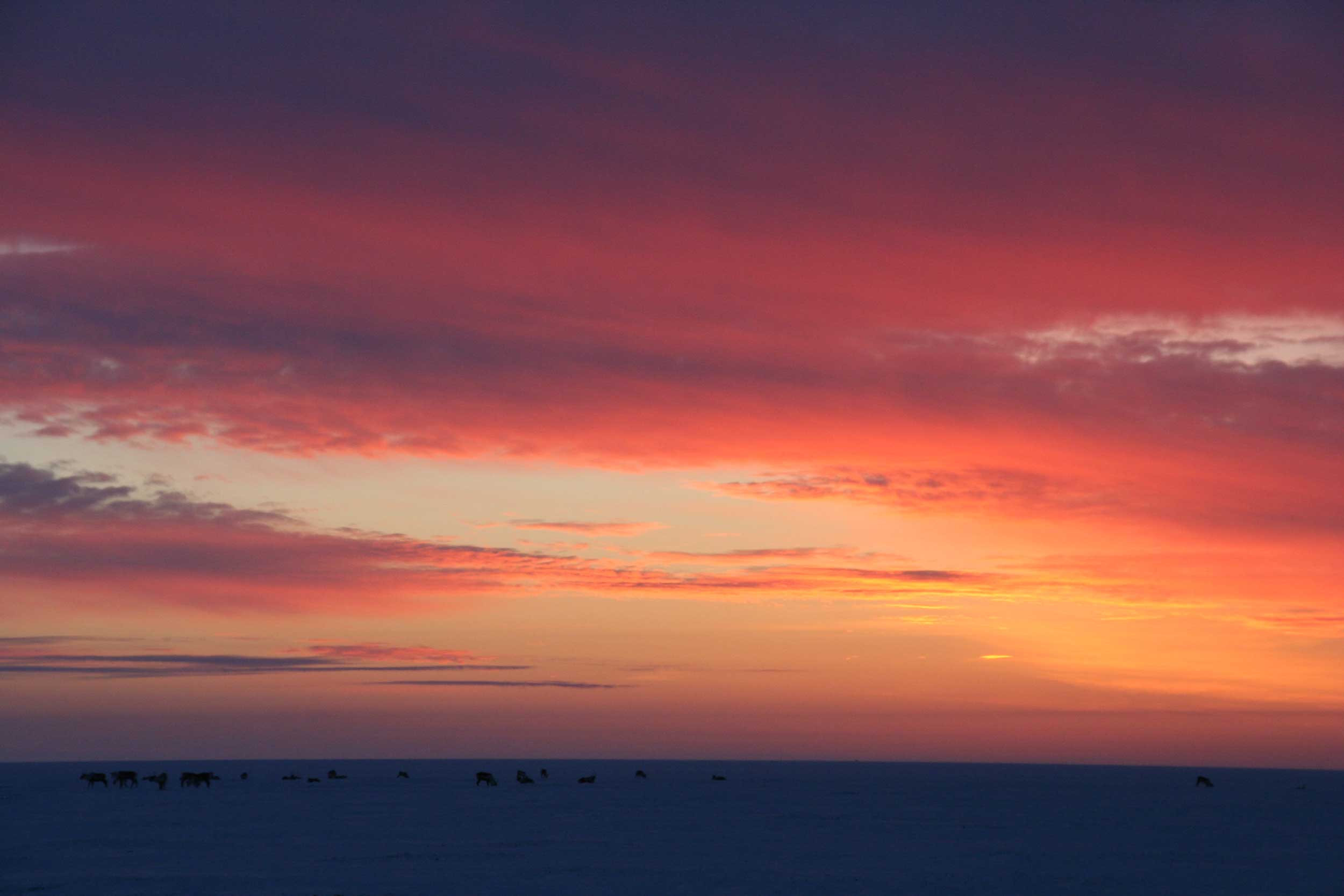 The sun rises over caribou on the Alaskan coastal tundra. Image credit: Kerri PrattANN ARBOR—For the first time, scientists have measured molecular iodine in the atmosphere of the Arctic and discovered that it is being released by the Arctic’s snowpack in the changing polar climate, according to research led by the University of Michigan Department of Chemistry.

“Essentially, we’ve found this unique chemistry occurring within the Arctic snowpack that hadn’t previously been observed. This is notable because of the rapid loss of sea ice in the Arctic that is impacting these processes,” said corresponding author Kerri Pratt, assistant professor in the U-M Department of Chemistry.

When molecular iodine absorbs a photon from the sun, it breaks apart into iodine atoms. These atoms can react with other molecules in the atmosphere, including ozone. When these atoms react with ozone, a greenhouse gas and “molecular cleaner” of air pollutants, it can deplete ozone in the atmosphere. Less than one part per trillion of iodine is enough to have a significant effect on ozone concentration in the lower atmosphere.

These new measurements of molecular iodine in the Arctic show that even a tiny amount of the element can deplete ozone in the lower atmosphere. This is surprising because iodine is so scarce in the Arctic snowpack compared to its close relatives and known ozone-killers, chlorine and bromine.

“Where we live, the air is really clean because of ozone. It’s like a Pac-Man of the atmosphere—it helps to gobble up pollution,” said co-author Paul Shepson, professor of analytical and atmospheric chemistry at Purdue University. “But it’s also toxic at high concentrations and regulated by the Clean Air Act. We need a ‘Goldilocks’ amount of ozone in the atmosphere—not too much, not too little.”

The research is published in the Proceedings of the National Academy of Sciences.

While Pratt and collaborators have previously discovered other molecules, including molecular bromine and chlorine, being released from the snowpack into the Arctic atmosphere, iodine is uniquely known to impact the formation of nanoparticles in the air, which can in turn form cloud droplets.

“Clouds are important for understanding the Earth’s energy budget,” Pratt said. “They have a dramatic impact on Earth’s temperature as well as its weather patterns and precipitation.”

While some iodine species had previously been measured in the Arctic, researchers weren’t sure of the source of those species in the atmosphere, and molecular iodine was at such low levels that it wasn’t able to be detected. For this study, Pratt, Shepson and co-author Angela Raso, a doctoral candidate at Purdue, measured the molecular iodine with a customized instrument called a chemical ionization mass spectrometer. Raso spent time in Pratt’s research lab at U-M preparing the instrument for its journey to the Arctic. 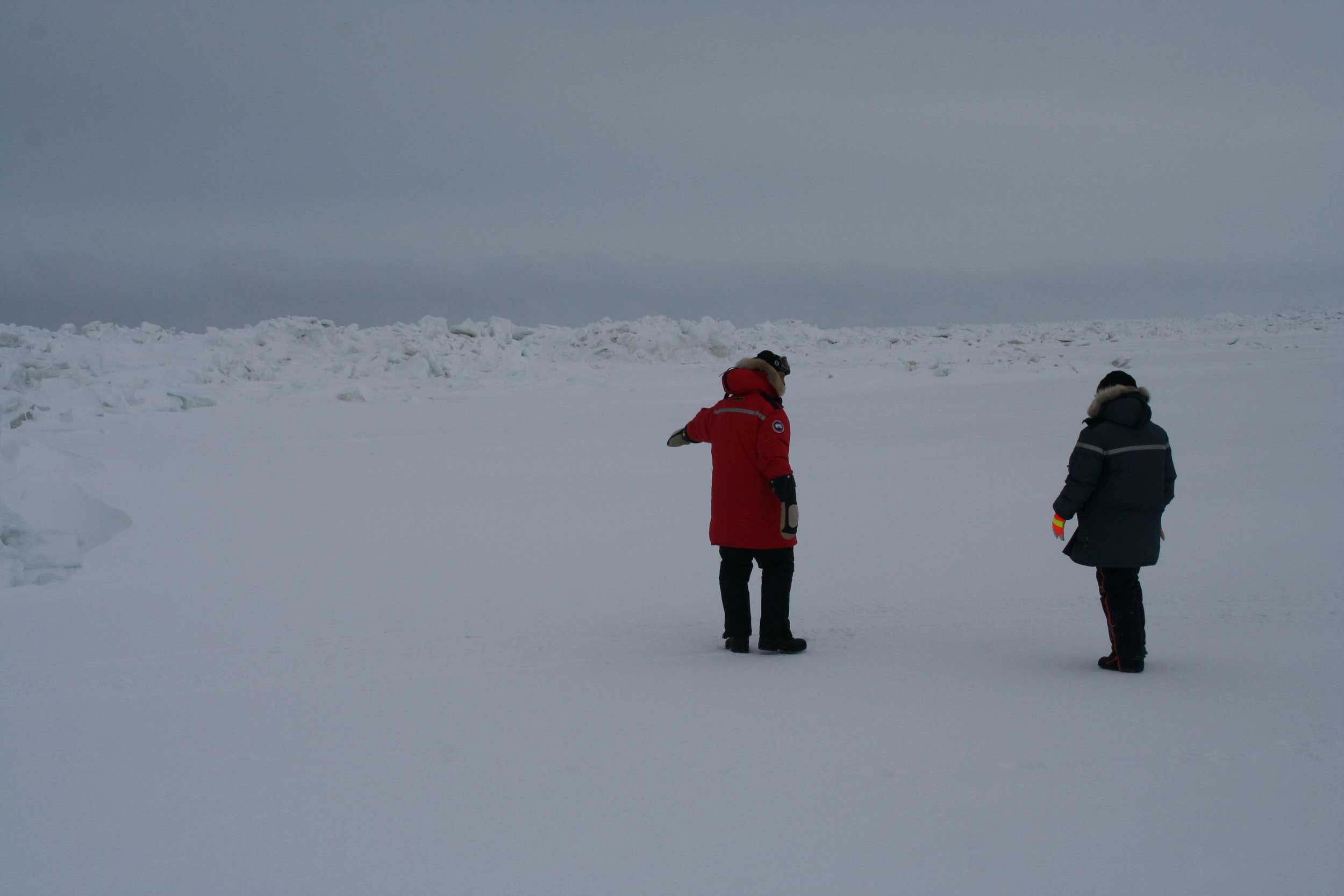 Graduate students Kyle Custard and Angela Raso exploring the Arctic sea ice. Image credit: Kerri PrattThey drew air samples both above the Arctic snowpack and from within the snowpack, measuring molecular iodine. Examining their snow samples at the Pacific Northwest National Laboratory, the researchers were also able to detect iodide at extremely low levels in their samples.

The light from the sun—and these lamps—leads to the formation of an oxidant at the snow grain surface, which reacts with iodide in the snow to produce molecular iodine.

The researchers say knowing where the iodine is coming from helps scientists understand its impact on the atmosphere.