ANN ARBOR—Rising sea levels, melting glaciers, more intense rainstorms and more frequent heat waves are among the planetary woes that may come to mind when climate change is mentioned. Now, two University of Michigan researchers say an increased risk of avian influenza transmission in wild birds can be added to the list.

Population ecologists Pejman Rohani and Victoria Brown used a mathematical model to explore the consequences of altered interactions between an important species of migratory shorebird and horseshoe crabs at Delaware Bay as a result of climate change. 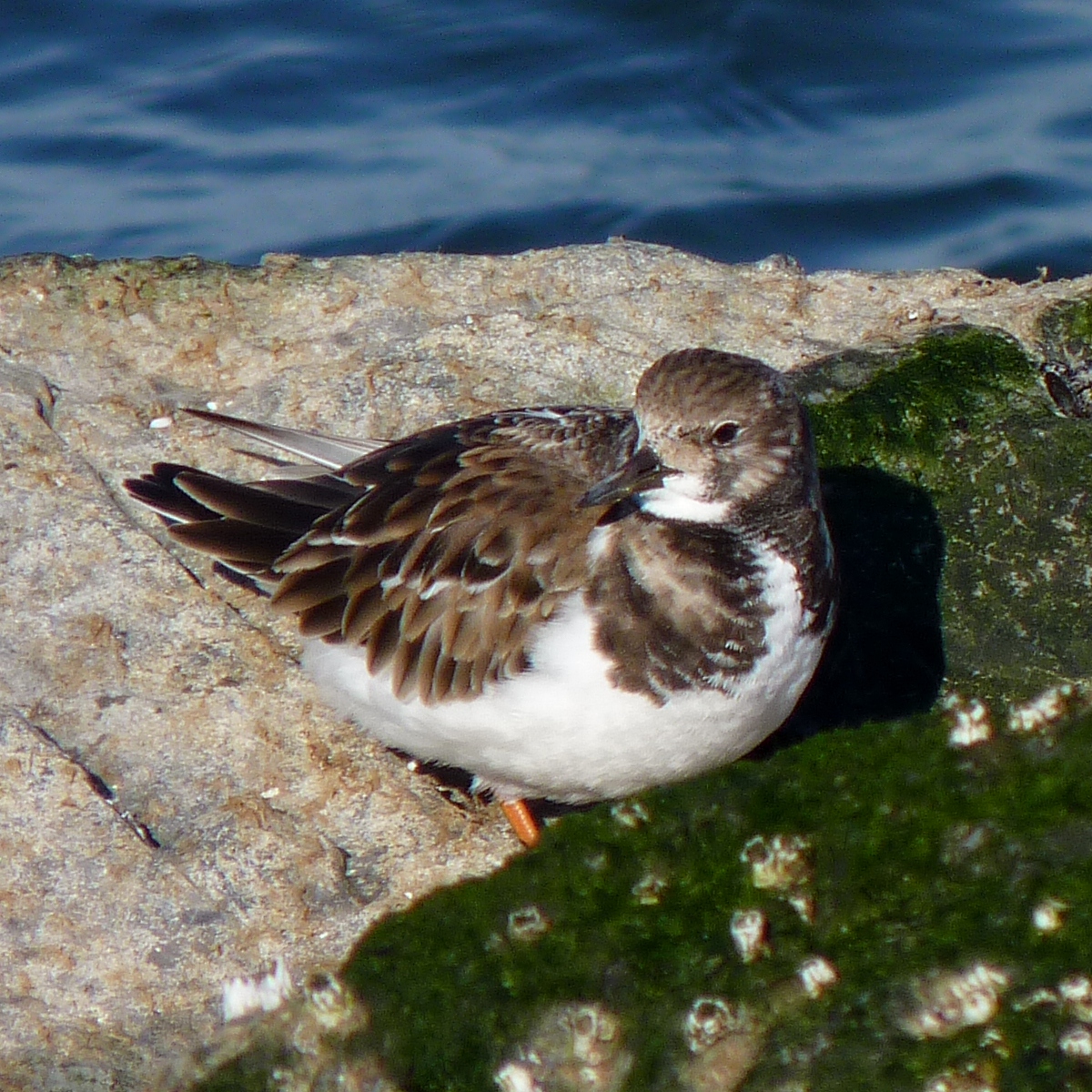 Photo of a ruddy turnstone. Image credit: flickr.com user Dendroica ceruleaThey found that climate change could upset the carefully choreographed interactions between ruddy turnstone shorebirds and the horseshoe crabs that provide the bulk of their food during the birds’ annual stopover at Delaware Bay, a major estuary of the Delaware River bordered by New Jersey to the north and Delaware to the south.

Climate change-caused disruptions to the well-timed interplay between the birds and crabs could lead to an increase in the avian influenza infection rate among ruddy turnstones and resident ducks of Delaware Bay, the researchers found. Because Delaware Bay is a crossroads for many bird species traveling between continents, an increase in the avian infection rate there could conceivably help spread novel subtypes of the influenza virus among North American wild bird populations, according to Rohani and Brown.

Their findings were published online Aug. 29 in the journal Biology Letters.

Avian influenza refers to infection with bird flu Type A viruses. Those viruses occur naturally among wild aquatic birds worldwide and can infect domestic poultry and other bird and animal species. 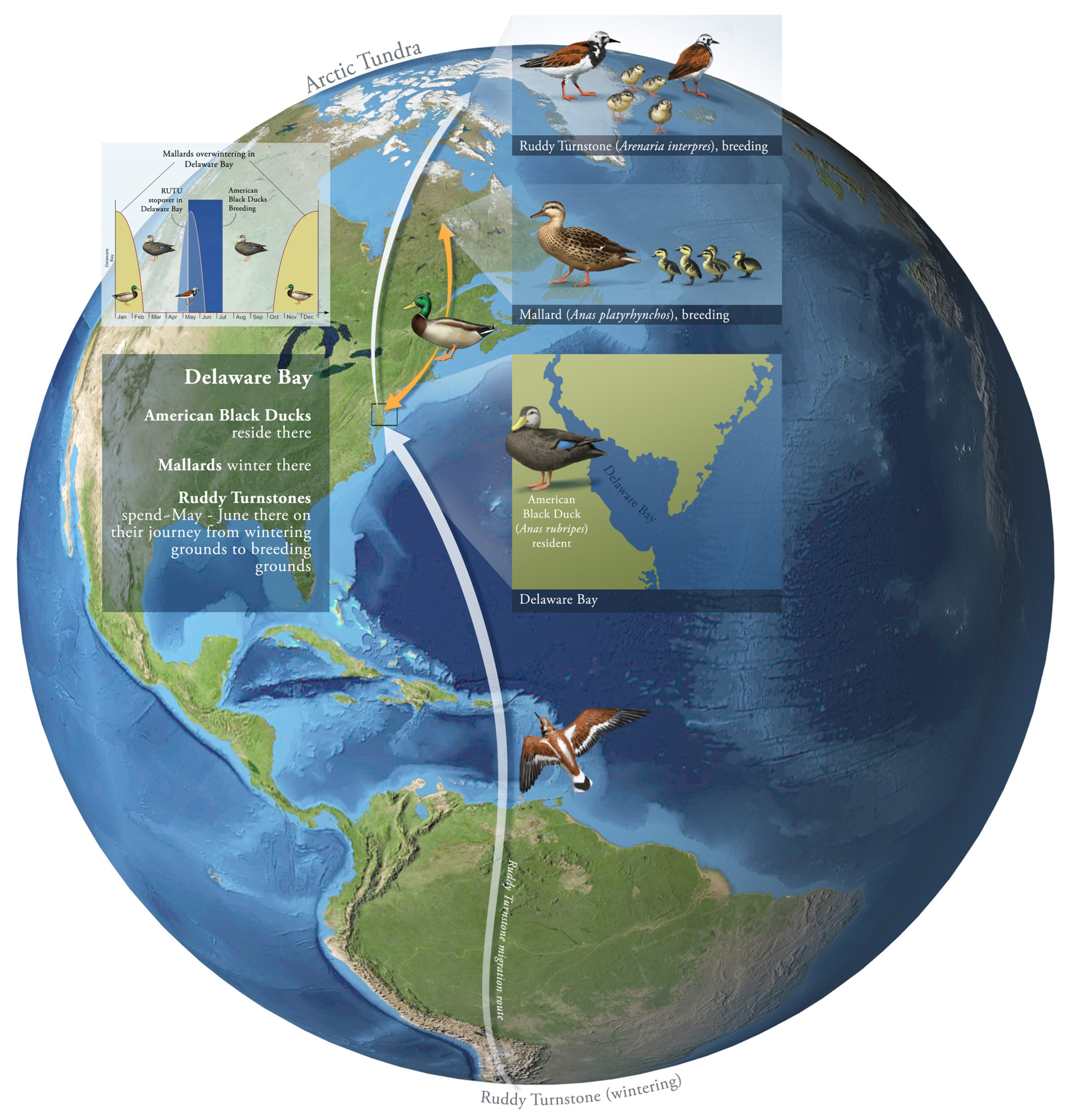 Migratory paths of the ruddy turnstone shorebird, which winters in South America and spends time in Delaware Bay each spring before flying to breeding grounds in the Arctic. University of Michigan researchers determined that climate change could increase the prevalence of avian bird flu among ruddy turnstones and other birds spending time in Delaware Bay. Credit: Illustration by John Megahan, University of MichiganDelaware Bay, which hosts many resident bird species as well as the hundreds of thousands of migratory birds that gather to feed on horseshoe crab eggs, is known as a hot spot for avian influenza virus. Infection levels in ruddy turnstones, which stop at Delaware Bay each May during their northbound migration to breeding grounds in the Arctic after wintering in South America, have been found to be exceptionally high.

Their mathematical model looked at virus infection rates in ruddy turnstones and two species of duck—mallards, which winter at the bay, and American black ducks, which live there year-round.

The researchers found that if ruddy turnstones reached Delaware Bay either several weeks earlier or later than their current May arrival date, influenza infection rates in the species increased significantly, driving up the infection rates—also called prevalence levels—in the resident ducks as well.

“If the ruddy turnstones arrive either earlier or later than they do now, then their arrival coincides with higher viral prevalence in the resident ducks,” said Brown, a postdoctoral research fellow in the Department of Ecology and Evolutionary Biology and the Center for the Study of Complex Systems. “And because these birds are interacting with a greater number of infected resident ducks, prevalence levels in ruddy turnstones are boosted.

If the timing of the horseshoe crab spawning season at Delaware Bay changed significantly due to climate change, ruddy turnstone populations would drop significantly due to a loss of food, and the influenza infection rate would decrease sharply as well, the researchers found.