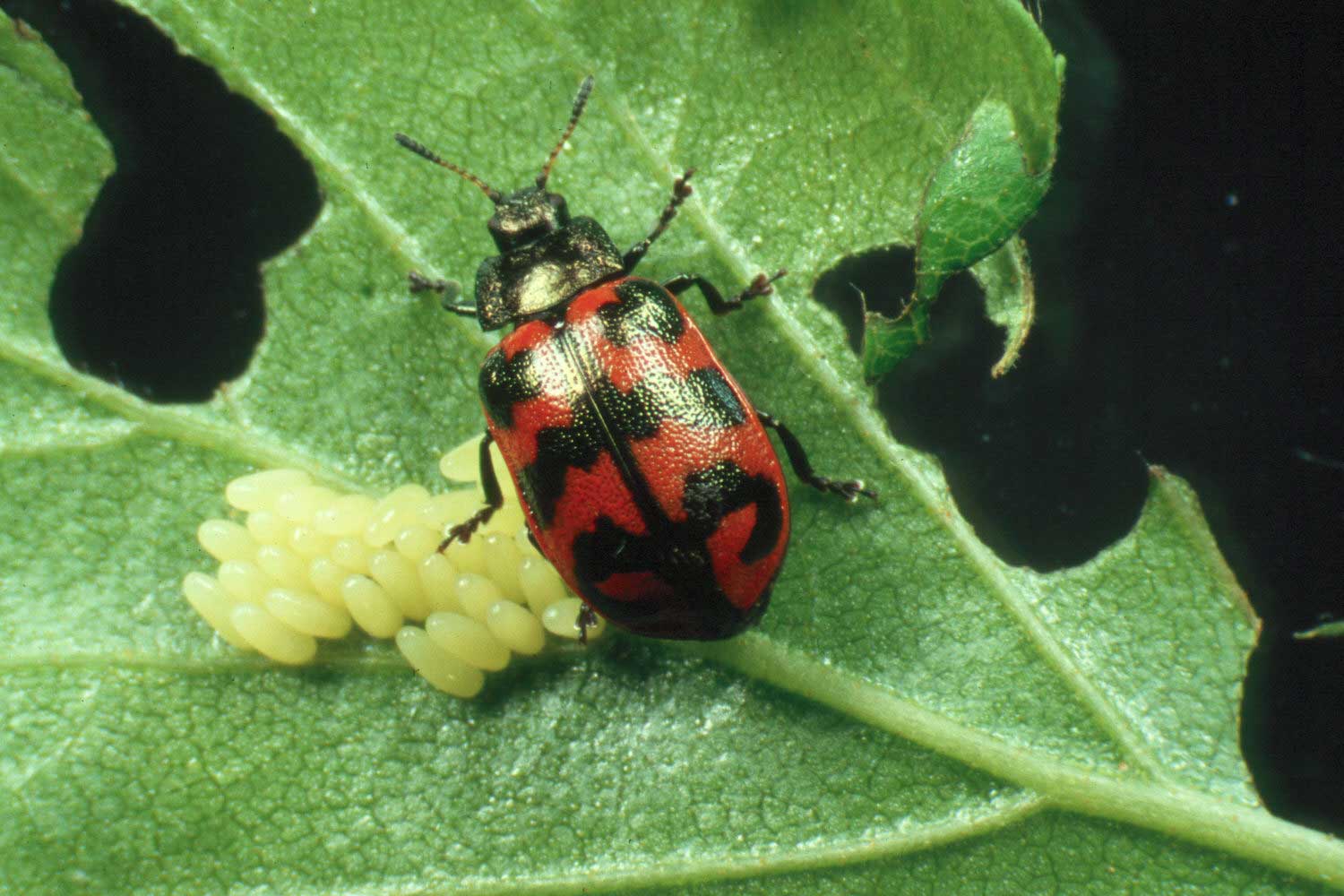 A female Chrysomela lapponica beetle laying eggs on her host plant. C. lapponica is one of four species of leaf-eating beetles monitored in a study of how changes in climate and pollution affect insect population dynamics in a subarctic forest. Image credit: Juergen Gross (Own work) [CC BY-SA 3.0 (http://creativecommons.org/licenses/by-sa/3.0)ANN ARBOR—As the world warms, outbreaks of plant-eating insect pests are expected to intensify, largely because warmer temperatures favor the pest’s biology while boosting growth of the plants they eat.

Several studies suggest that climate warming may be a big benefit to plant-eating pests at high latitudes, especially high in subarctic or arctic ecosystems.

But a new study by a University of Michigan ecologist and his Finnish colleagues concludes that other factors, such as changes in the amount of air pollution in a forest, can outweigh the pest-favoring effects of climate warming.

“Our study demonstrates that some plant-feeding insect species—even those capable of outbreaks—do not benefit from rapid climate warming even in subarctic regions, which are traditionally seen as most sensitive to any kind of natural and human-induced disturbances,” said Mark Hunter, a professor in the U-M Department of Ecology and Evolutionary Biology. “The key message is that some of the negative effects of climate change can be mitigated if we remove other sources of environmental stress—in this case, pollution.”

Hunter and his colleagues explored how changes in climate and pollution affect insect population dynamics in subarctic forests of northwestern Russia. They monitored populations of four leaf-beetle species that feed on willow trees at 13 forest sites, from 1993 through 2014.

At the study sites, spring and fall temperatures increased 4.5 to 5.4 degrees Fahrenheit (2.5 to 3 C) during the 21-year observation period.

During that time, emissions from a nearby nickel-copper smelter decreased fivefold. The study sites are at varying distances (up to about 25 miles) from the Monchegorsk smelter on Russia’s Kola Peninsula, which was one of the Northern Hemisphere’s largest polluters for decades.

Hunter and his colleagues found that none of the four beetle species became more abundant during the study period, despite the warming climate and higher-quality plant food. In fact, densities of two species declined 20-fold during that time.

The researchers concluded that the population decline was likely due to increased mortality from natural enemies—mainly predators and parasites—of the beetles.

“It turns out that decreasing pollution levels of heavy metals from the smelter allowed the natural enemies of the willow pests to re-establish in the region,” Hunter said. “In addition, the predators of the beetle pests benefitted from the warming climate. So the natural enemies are preventing the beetles from taking advantage of climate change.”

Hunter said the implications of the research extend far beyond the subarctic forests of Russia.

“Throughout the world’s agricultural and forest systems, if we can maintain or re-establish viable populations of natural enemies, we may prevent pest populations from exploiting climate change,” he said.

The findings were published online June 4 in the journal Science of the Total Environment. Hunter’s co-authors are Elena Zvereva, Vitali Zverev and Mikhail Kozlov of the University of Turku in Finland.

The study was supported by the Academy of Finland, the Maj and Tor Nessling Foundation, EC through the BALANCE project, the University of Turku and the U.S. National Science Foundation.