Cold-survival strategies in animals: A spectrum, not either-or 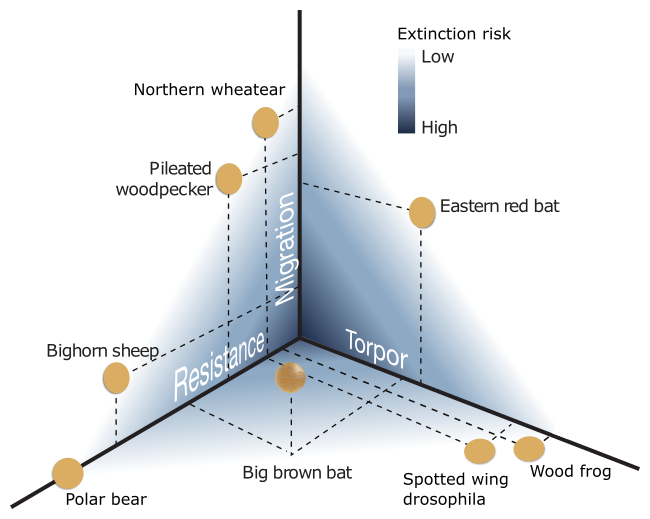 Cold-survival strategies in animals. Species (tan circles) can utilize one of three axes (migration, torpor or cold resistance) to facilitate survival in freezing environments. Species may utilize just one axis, but would need to do so to a relatively high degree to avoid increased risk of extirpation or extinction (darker shades in center). Alternatively, species may use multiple strategies to a lesser degree to reach the adaptive optimum (lighter shades). Species placements are informed approximations, and relationships are conditioned upon controlling for comparable environmental conditions in the winter extent of range. Illustration credit: John Megahan/University of Michigan, from Auteri in Biology Letters, May 2022

Animals have three main strategies to survive the freezing temperatures of winter: migrating, remaining in place and resisting the cold, and reducing body temperature and metabolic rate in a state called torpor.

These cold-survival strategies are often studied in isolation by biologists and treated as mutually exclusive alternatives: An animal species is described as either migrating or hibernating (torpor includes both dormancy and hibernation), for example.

But in reality, many animals combine multiple strategies to beat the cold, University of Michigan evolutionary biologist Giorgia Auteri explains in the journal Biology Letters.

Sometimes, strategies are split among members of a species. Some blue jays may migrate south while most state put, and individual eastern chipmunks may shift from torpor to cold resistance when food caches are abundant. The common green darner dragonfly exhibits tradeoffs between migration and torpor, with more northern populations being exclusively migratory. 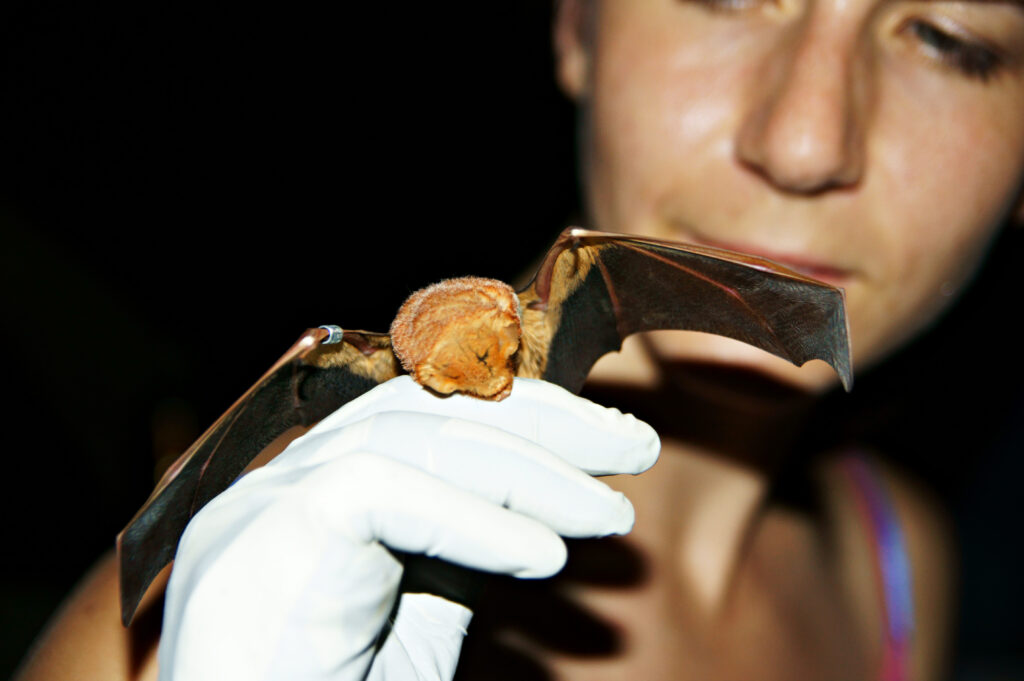 U-M biologist Giorgia Auteri with an eastern red bat (Lasiurus borealis), one of the many species of bats that use both torpor and seasonal migration. Image credit: Amy Gondran

“Separate treatment of these strategies misses opportunities to identify broader patterns and mechanisms and eliminates the possibility of discoveries that require comparisons across strategies,” said Auteri, who primarily studies bats. She received her doctorate from U-M’s Department of Ecology and Evolutionary Biology this spring and will join the Missouri State University faculty in the fall.

Among other applications, the proposed conceptual framework helps resolve discrepancies in Bergmann’s rule, which refers to the trend of larger animal body size at higher latitudes. This trend purportedly facilitates cold resistance due to the lower surface area-to-volume ratio among larger animals.

However, small mammals and migratory birds deviate from Bergmann’s rule. A reassessment of this deviation under an integrated framework for cold-survival strategies recognizes that species can use seasonal migration or torpor as alternatives to cold resistance.

“This proposed framework, which considers cold-survival strategies collectively, resolves the mystery of why some taxa ‘break’ the rule,” Auteri said. “Small mammals do not follow the rule well because they often use torpor instead of resistance. Migratory birds conform less strongly because, like small mammals, they use an alternative—migration.” 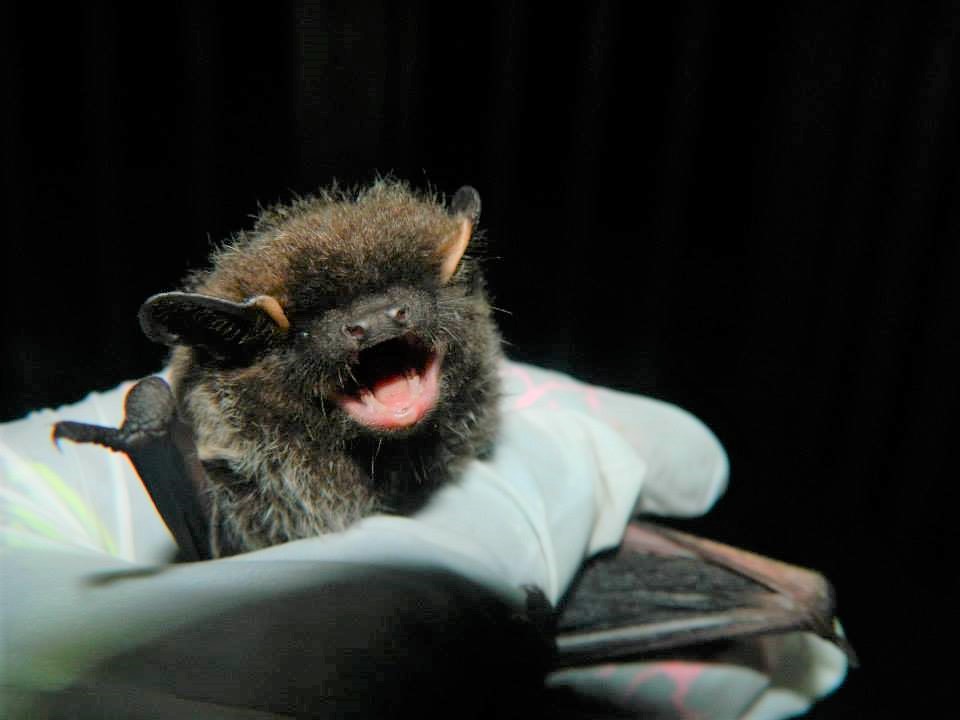 Silver-haired bat (Lasionycteris noctivagans), one of the many species of bats that use both torpor and seasonal migration. Image credit: Giorgia Auteri

Freezing temperatures are inherently challenging for life, which is water-based. Cold-survival strategies for animals are fundamentally about surviving energy deficits imposed by reduced solar energy in the winter, with freezing temperatures and subsequent reduced productivity—including food availability.

How species cope with these conditions fundamentally shapes ecological and evolutionary processes. But until now, there has been no comprehensive conceptual framework for cold-survival strategies, according to Auteri.

In her Biology Letters article, Auteri proposes a framework with four components for conceptualizing and quantifying cold-survival strategies. She argues that cold-temperature resistance, torpor and seasonal migration should be considered collectively; that species can, and commonly do, use multiple strategies; that each of the three strategies exists on a spectrum, permitting partial use; and that species can exhibit proportional use, where the use of one strategy correspondingly decreases other strategies.

Auteri said the new integrated conceptual framework can also be applied to the study of animal responses to anthropogenic climate change.

For example, expected species range shifts are often evaluated based on whether an animal uses hibernation or resistance or torpor as its cold-survival strategy. The proposed framework encourages biologists to study those strategies together when assessing a species’ sensitivity to climate change.

During part of the time Auteri spent working on the framework, she was supported by the Helen Olsen Brower Memorial Fellowship, awarded by the U-M Department of Ecology and Evolutionary Biology.