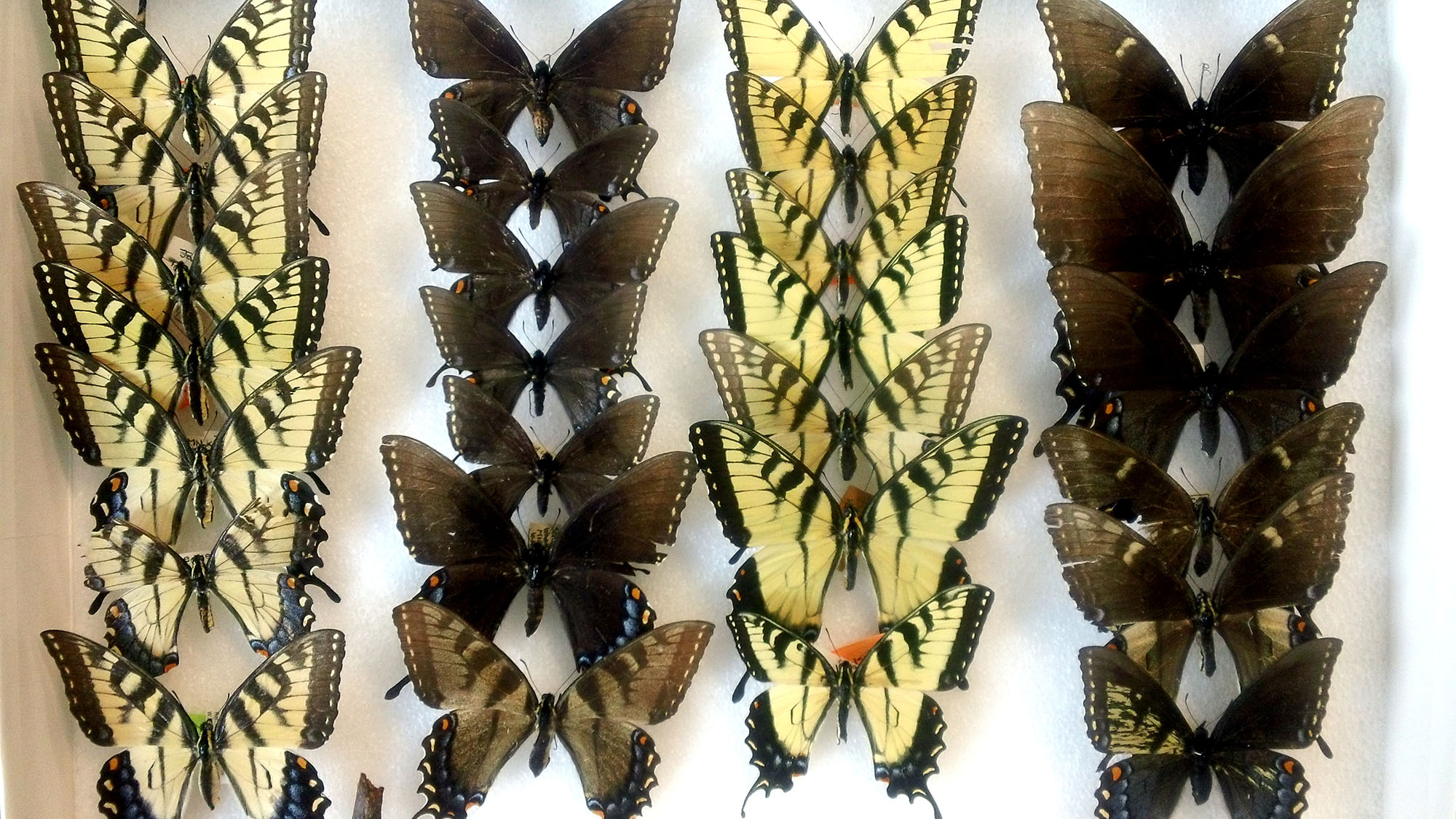 A drawer of eastern tiger swallowtail butterflies at the University of Michigan Museum of Zoology. The butterflies were collected at various locations in the eastern United States. Image credit: Mark O’BrienANN ARBOR—Collecting plant and animal specimens is essential for scientific studies and conservation and does not, as some critics of the practice have suggested, play a significant role in species extinctions.

Those are the conclusions of more than 100 biologists and biodiversity researchers who signed a letter to the journal Science published online May 22.

The letter is a response to an April 18 Perspectives article in Science arguing that alternative methods of documentation—such as high-resolution photography, audio recordings and nonlethal tissue sampling for DNA analysis—make the field collection of animal and plant specimens unnecessary.

That’s just not the case, according to the authors of the response letter, many of whom work in natural history museums that house the preserved remains of animals and plants. The authors are from more than 60 research institutions on six continents and include six scientists from the University of Michigan’s Museum of Zoology.

“None of the suggested alternatives to collecting specimens can be used to reliably identify or describe animals and plants,” said Cody Thompson, mammal collections manager and assistant research scientist at the U-M Museum of Zoology.

“Moreover, identification often is not the most important reason to collect specimens. Studies that look at the evolution of animal and plant forms through time are impossible without whole specimens. Preserved specimens also provide verifiable data points for monitoring long-term changes in species health and distribution.”

In addition, specimens from museum collections and their associated data are essential for making informed decisions about species management and conservation now and in the future, the authors state.

“Photographs and audio recordings can’t tell you anything about such things as a species’ diet, how and where it breeds, how quickly it grows, or its lifespan—information that’s critical to assessing extinction risk,” said Luiz Rocha of the California Academy of Sciences, who organized the response to the Science article.

And contrary to statements made in the April 18 Science article titled “Avoiding (Re)extinction,” collecting biological specimens does not play a significant role in species extinctions, according to the rebuttal authors.

In the April article, Arizona State University’s Ben Minteer and three co-authors cite several examples of species extinctions and suggest that the events were linked to overzealous museum collectors.

Not so, according to authors of the rebuttal letter, who reviewed the evidence and found that none of the cited extinctions—including the disappearance of flightless great auks in Iceland and Mexican elf owls on Socorro Island, Mexico—can be attributed to scientific collecting.

Millions of great auks were harvested for food, oil and feathers over the millennia, and only about 102 exist in scientific collections. Mexican elf owls were common when specimens were collected between 1896 and 1932, and the most likely reasons for extinction around 1970 were habitat degradation and predation by invasive species.

At the same time, Minteer and his colleagues failed to point out any of the valuable services that museum biological collections have provided over the decades, according to the rebuttal authors. 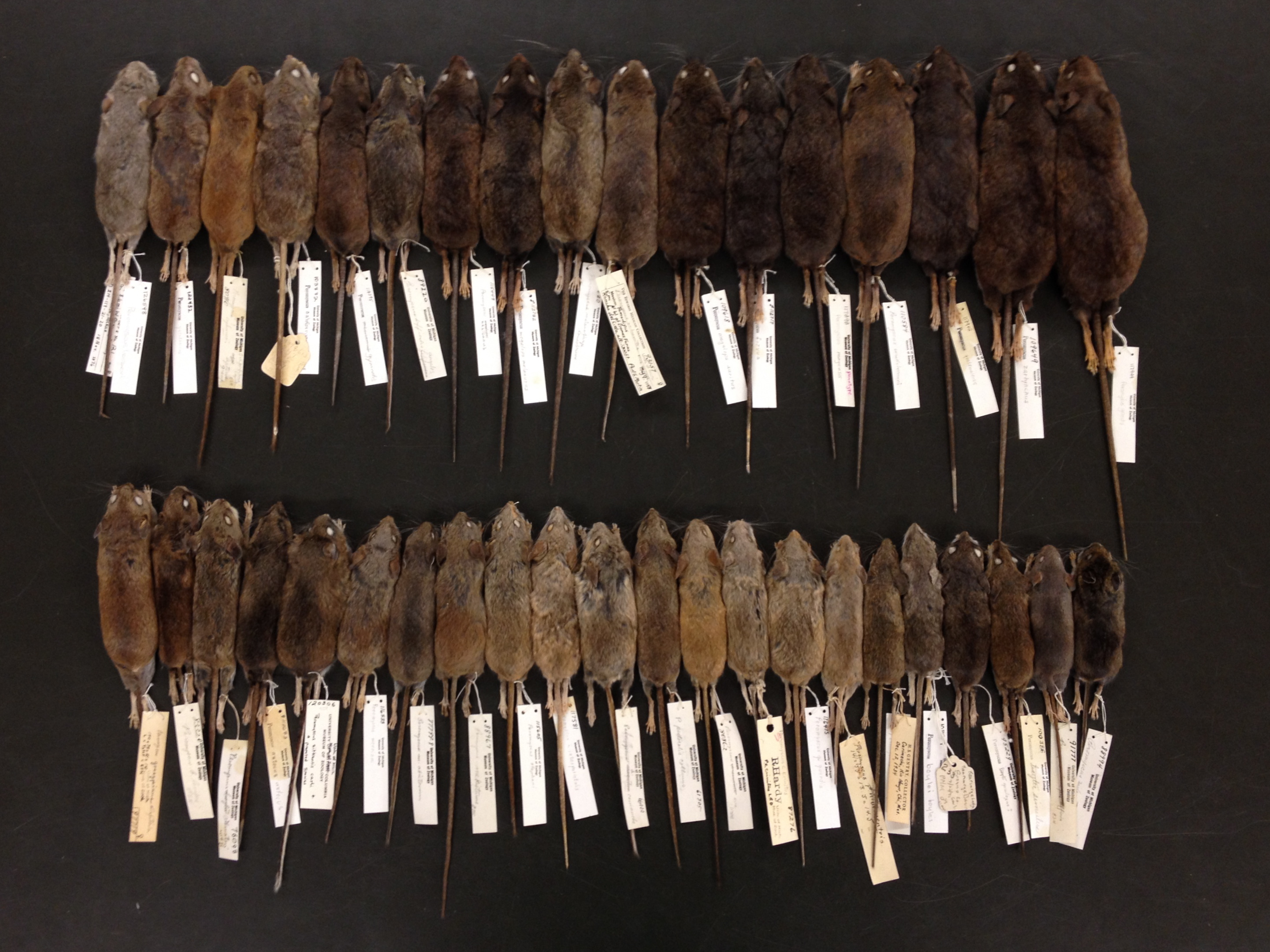 Thirty-eight of the 56 known species of the deer mouse, genus Peromyscus, at the University of Michigan Museum of Zoology. Researchers believe there may be more species that have yet to be discovered. Image credit: Cody ThompsonBoth historical and new collections played a key role in understanding the spread of the chytrid fungus infection, one of the greatest current global threats to amphibians. The decision to ban DDT and other environmental pollutants was based on the discovery of thinning bird eggshells collected over an extended period. And the declining body size of animals, one of the negative effects of climate change, was discovered using body-size data from museum specimens.

In other cases, genetic data from decades-old scientific specimens has even been used to “de-extinct” species. One of these, the Vegas Valley leopard frog, was thought to have gone extinct in the wake of Las Vegas development. However, a study published in 2011 compared the genetics of specimens from the extinct population to individuals from surviving populations of similar-looking frogs elsewhere in the Southwest and found them to be the same species.

These types of discoveries, the rebuttal authors wrote, are “the hallmark of biological collections: They are often used in ways that the original collector never imagined.” And with the continuing emergence of new technologies, this potential only grows.

That potential, combined with the increasing number of threats species face and the need to understand them, suggests that the need to collect specimens—and to share the information they hold—has never been greater.

In their April article, Minteer and his colleagues erroneously portray scientific collecting in a negative light that distracts from the primary causes of modern extinctions: habitat degradation and loss, unsustainable harvesting and invasive species.

“Halting collection of animal and plant specimens by scientists would be detrimental not only to our understanding of Earth’s diverse biota and its biological processes, but also for conservation and management efforts,” said Diarmaid O’Foighil, director of the U-M Museum of Zoology and a co-author of the rebuttal letter.

“That detriment in understanding would only increase with time because having museum specimens available for future generations of scientists will allow their study using research methodologies that have yet to be invented.”