Colossal black holes locked in dance at heart of galaxy

The two massive bodies are each hundreds of millions of times the mass of our sun and span a distance roughly fifty times the size of our own solar system. When the pair merge in roughly 10,000 years, the collision is expected to shake space and time itself, sending gravitational waves across the universe.

The study, which uses University of Michigan data collected at the now-closed U-M Radio Astronomy Observatory at the Peach Mountain Observatory, was led by a team of astronomers at Caltech and includes U-M astronomer and research scientist Margo Aller.

The researchers discovered evidence for this scenario within a fiercely energetic object known as a quasar. Quasars are active cores of galaxies in which a supermassive black hole is siphoning material from a disk encircling it.

In some quasars, the supermassive black hole creates a jet shooting out at near the speed of light. PKS 2131-021 belongs to a subclass of quasars called blazars in which the jet is pointing towards the Earth. Astronomers knew that quasars could possess two orbiting supermassive black holes but finding direct evidence for this has proven difficult.

Reporting in The Astrophysical Journal Letters, the researchers argue that PKS 2131-021 is the second known candidate for a pair of supermassive black holes caught merging. This first candidate pair, within a quasar called OJ 287, orbits at greater distances every 9 years.

“A lot of the information in the radio band of light that we have on blazars actually has come out of this wonderful project that we had at the Peach Mountain site,” Aller said. “Since you can’t resolve them, you have to look for indirect evidence for the presence of a binary supermassive black hole system, and that has come from things such as looking for the effect on motions of nearby stars or looking at spectral lines or looking for repeating flares with the same spacing and shape.”

The tell-tale evidence for the study’s finding came in the form of a light curve that spans 45 years. According to the study, a powerful jet emanating from one of the two black holes within PKS 2131-021 is shifting back and forth due to the pair’s orbital motion. This causes periodic changes in the quasar’s radio-light frequencies.

“When we realized that the peaks and troughs of the light curve detected from recent times matched the peaks and troughs observed between 1975 and 1983, we knew something very special was going on,” said Sandra O’Neill, lead author of the new study and an undergraduate student at Caltech who is mentored by Tony Readhead, professor emeritus of astronomy.

The combination of the radio data yields a nearly perfect sinusoidal light curve unlike anything observed from quasars before. The UMRAO data are particularly important, Aller says, because they overlap with data from the Haystack Observatory and OVRO, providing a continuous light curve. Additionally, researchers need observations of many flares for a convincing result, requiring many decades of observation.

“The problem is that you need a very long time-base of data to get a significant result—and the paper has this absolutely gorgeous light curve of 45 years,” Aller said. “The results show this behavior. It shows that it’s persistent, and 31 years of that light curve are the Michigan data. The probability of showing the same repeating pattern in this study by chance would be 1 in 635,000.” 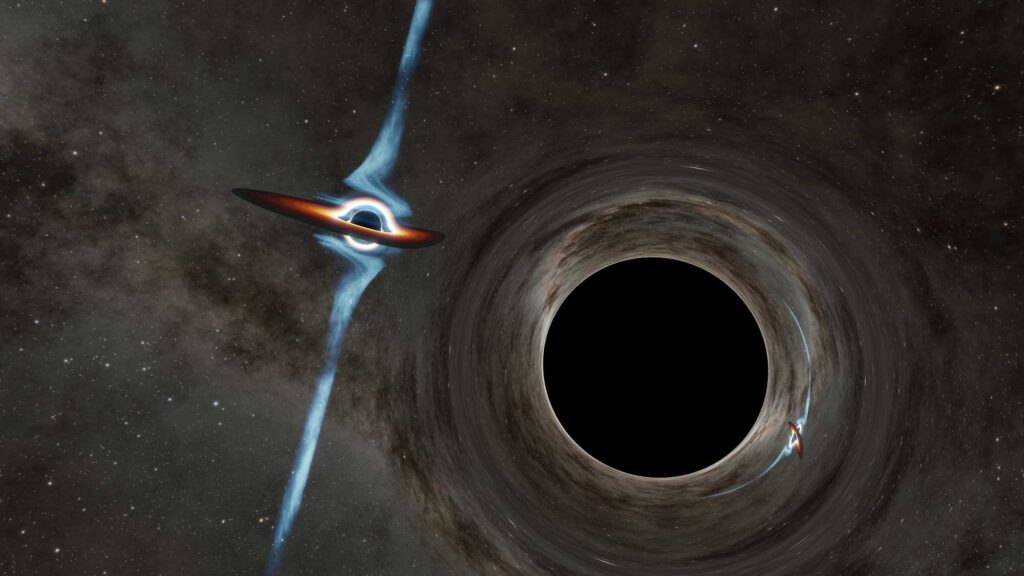 A team of researchers has discovered a pair of black holes orbiting each other 13 billion light-years away. The smaller black hole is in the foreground, and the more massive black hole, with a jet emanating from it and pointed at Earth, is in the background. Image credit: R. Hurt (IPAC)/Caltech

Readhead says the discoveries unfolded like a “good detective novel,” beginning in 2008 when he and colleagues began using the 40-meter telescope at OVRO to study how black holes convert material they “feed” on into relativistic jets, or jets traveling at speeds up to 99.9% that of light. They had been monitoring the brightness of more than 1,000 blazars for this purpose when, in 2020, they noticed a unique case.

PKS 2131 was varying not just periodically, but sinusoidally, meaning that the powerful jet emanating from one of the black holes in the pair was shifting in a predictable way because of the orbital motion of the black hole. The question, Readhead says, then became how long has this sine wave pattern been going on?

The research team went through archival radio data to look for past peaks in the light curves that matched predictions based on the more recent OVRO observations. They looked through data from the VLBA and found that the data confirmed the peaks in the UMRAO and OVRO data. These data show that the variable signal comes from the inner region of the jet.

Aller began working at the UMRAO in the mid-1970s after getting her Ph.D. at U-M. Her husband and research partner Hugh Aller set up the technical aspects of the observatory, including automating the relatively small telescope, while Aller focused on choosing which celestial bodies the telescope would target.

“Because we did not have to apply for time on a public instrument, if something exciting happened, we could change our program within a few hours and observe it,” Aller said. “We have this wonderful database, which is still being used, and it’s data from that program you’re seeing in this paper. We used this relatively small telescope to probe fundamental questions about these blazars.”

Archival observations from UMRAO also identified this 2005 peak and further showed that there were no sinusoidal variations for 20 years before that time—until 1981 when another predicted peak was observed. The researchers also found that the Haystack Observatory had made radio observations of PKS 2131-021 between 1975 and 1983. These data revealed another peak matching their predictions, this time occurring in 1976.

Readhead compares the system of the jet moving back and forth to a ticking clock and says that, even though the periodic signal disappeared for 20 years, likely due to changes in the activity of the black hole, it reappeared with the same phase and period.

Future observations using pulsar timing arrays may be able to detect gravitational waves rippling outward from the quasar, which would provide more clues about what lurks within.

“We were not expecting blazars with orbiting supermassive black holes to produce a beautiful sine wave curve like this,” Readhead said. “Nature often does something even weirder than you expect.”

The UMRAO research program was supported by a series of grants from the National Science Foundation and NASA. Funding for the operation of UMRAO was provided by U-M.