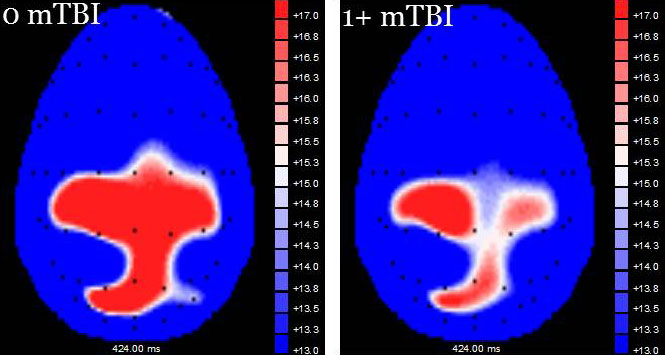 The photos compare images of two brains, one with and without head injury. The red areas indicates electrical activity in response to the task researchers asked study participants to perform, and non-injured brains show more red, thus more electrical activity during the task. Image courtesy of Steven BroglioANN ARBOR—Concussions and even lesser head impacts may speed up the brain’s natural aging process by causing signaling pathways in the brain to break down more quickly than they would in someone who has never suffered a brain injury or concussion.

Researchers from the University of Michigan School of Kinesiology and the U-M Health System looked at college students with and without a history of concussion and found changes in gait, balance and in the brain’s electrical activity, specifically attention and impulse control, said Steven Broglio, assistant professor of kinesiology and director of the Neurotrauma Research Laboratory.

The declines were present in the brain injury group up to six years after injury, though the differences between the study groups were very subtle, and outwardly all of the participants looked and acted the same.

Broglio, who is also affiliated with Michigan NeuroSport, stressed that the studies lay out a hypothesis where concussions and head impacts accelerate the brain’s natural aging process.

The study, “Cognitive decline and aging: The role of concussive and subconcussive impacts,” appears in the July issue of journal Exercise and Sport Sciences Reviews.

“The last thing we want is for people to panic. Just because you’ve had a concussion does not mean your brain will age more quickly or you’ll get Alzheimer’s,” Broglio said. “We are only proposing how being hit in the head may lead to these other conditions, but we don’t know how it all goes together just yet.”

Broglio stressed that other factors, such as lifestyle choices, smoking, alcohol consumption, physical exercise, family history and whether or not you “exercise” your brain also impact the brain’s aging process. Concussion may only be one small factor.

To begin to understand how concussions might impact brain activity and its signaling pathways, researchers asked the participants to perform certain tasks in front of a computer, and took images of their brains. The brains of the nonconcussed group showed a greater area of electrical activation than the participants with a history of brain injury.

The signaling pathways in our brains are analogous to a five-lane highway. On a new highway, traffic runs smoothly and quickly as all lanes are in top shape. However, during normal aging, the asphalt deteriorates and lanes might become bumpy or even unusable. Traffic slows.

Similarly, our brains start with all pathways clear to transfer electrical signals rapidly. As we age, the brain’s pathways break down and can’t transfer the information as quickly. Concussive and other impacts to the head may result in a ‘pothole’ on the brain’s highway, causing varying degrees of damage and speeding the pathway’s natural deterioration.

“What we don’t know is if you had a single concussion in high school, does that mean you will get dementia at age 50?” Broglio said. “Clinically, we don’t see that. What we think is it will be a dose response.

“So, if you played soccer and sustained some head impacts and maybe one concussion, then you may have a little risk. If you went on and played in college and took more head balls and sustained two more concussions, you’re probably at a little bigger risk. Then if you play professionally for a few years, and take more hits to the head, you increase the risk even more. We believe it’s a cumulative effect.”

In the next phase of study, researchers will look at people in their 20s, 40s and 60s who did and did not sustain concussions during high school sports. They hope to learn if there is an increasing effect of concussion as the study subjects age. If interested in participating in the study, email neurotraumalab.umich@gmail.com.

Researchers from the departments of Physical Medicine and Rehabilitation, and Neurology, and the Michigan Alzheimer’s Disease Center also participated in the study.

The University of Michigan School of Kinesiology continues to be a leader in the areas of prevention and rehabilitation, the business of sport, understanding lifelong health and mobility, and achieving health across the lifespan through physical activity. The school is home to the Athletic Training, Movement Science, Physical Education, and Sport Management academic programs, bringing together leaders in physiology, biomechanics, public health, urban planning, economics, marketing, public policy, and education and behavioral science.