Deaths in China reflect a slower expansion of the new coronavirus, suggesting a fractal network. 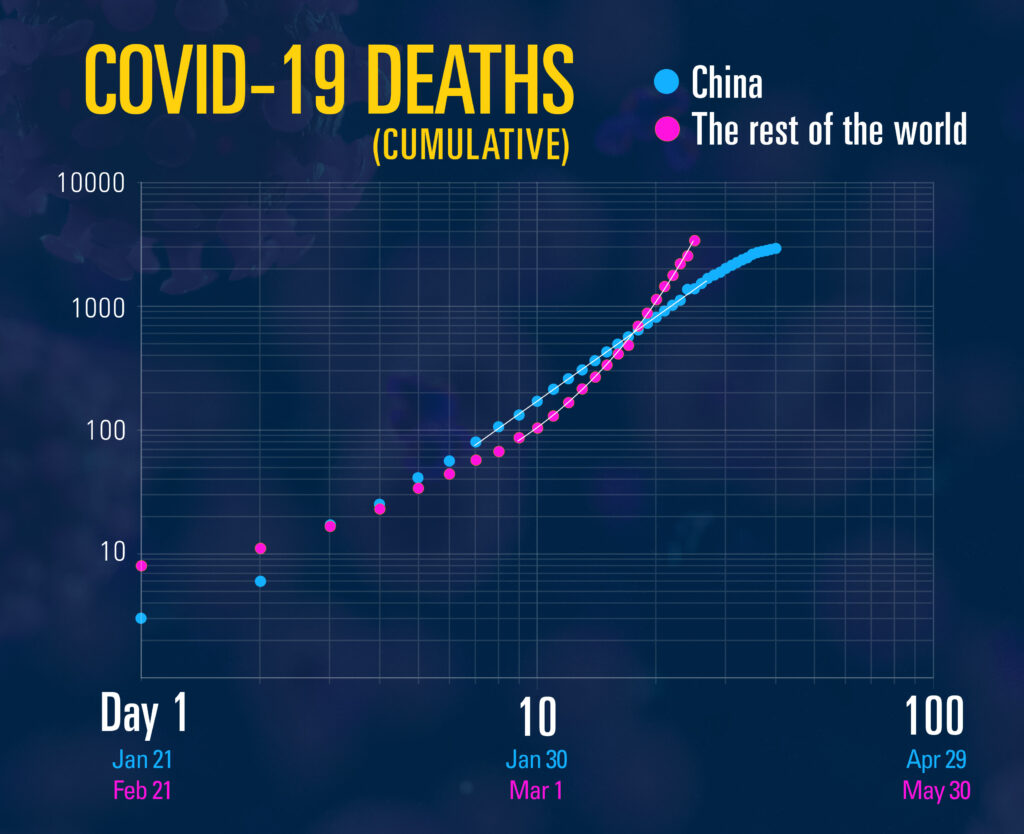 The deaths in China changed from exponential (curved) growth to the straight line of a power law before tapering off. Meanwhile, deaths outside China continue to follow an exponential curve. This shows that while the virus is being successfully managed in China, it is essentially uncontrolled in the rest of the world. Robert and Anna Ziff applied logarithmic scales to both the days axis and the death axis to make the difference between exponential and power law growth easier to see. Data source: World Health Organization. Image credit: Steve Alvey/University of Michigan Engineering

ANN ARBOR—The actions many communities are taking to slow the spread of COVID-19 may be shrinking deaths in a pattern that brings together nature, art and math, according to a new study from the University of Michigan.

The findings, described in a preprint paper that has not yet been peer-reviewed, indicate that containment works and could help us snuff out the virus faster.

While the spread of a virus is often represented with exponential growth and then decay as a population becomes immune, the study suggests that in China, the containment efforts toned down the high-speed exponential increase of COVID-19 deaths into a spread better represented by a power law.

“It seems that they are succeeding in containing the virus in China, but in other places, the virus is still growing exponentially,” said Robert Ziff, a professor of chemical engineering at U-M, senior author of the preprint paper.

The power law equation suggests that the new coronavirus, known as SARS-CoV-2, spread in China through a fractal pattern—or a pattern repeated at smaller and smaller scales, like the compound leaves of ferns or the branches of a tree.

In effect, the virus slows its spread within areas where social distancing measures have been undertaken. These include quarantines; the closures of schools, restaurants and shops; the cancellation of events; and restrictions on leaving home. The virus can still leap to communities that don’t have these measures in place, but with each location quickly implementing containment measures, the spread in each new area is smaller.

“Further work is needed to understand the different trends in the death counts, but these results underline the importance of public health guidance—and the following of those orders,” said Anna Ziff, a doctoral student in economics at Duke University and first author on the paper.

The father-daughter team posted their analysis to Medrxiv February 17 and then updated it March 1. They use death data because it appears to be much more reliable than infection data, especially as many of those carrying the SARS-CoV-2 virus show no symptoms of COVID-19.

Deaths in China have tailed off considerably in recent weeks, with recovered patients now outnumbering active cases by nearly two to one. However, the team is concerned that COVID-19 deaths in the rest of the world currently follow an exponential curve.

“In most of the rest of the world, the number of daily cases has not peaked, so unfortunately there may be many more deaths,” said Robert Ziff.

While the team acknowledges that their study depends on the accuracy of the data provided by China, they believe the power law equation is a reason for optimism.

“It should be possible to stop the virus with prompt identification and containment,” said Robert Ziff.