Controlling ragweed pollen in Detroit: A no-mow solution for Motown? 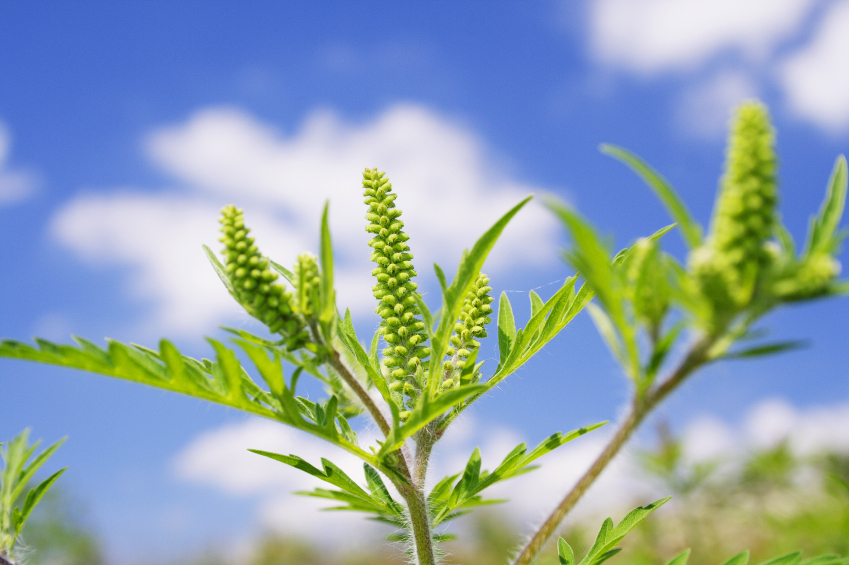 ANN ARBOR—When it comes to controlling hay fever-triggering ragweed plants on Detroit vacant lots, occasional mowing is worse than no mowing at all, and promoting reforestation might be the best solution.

Those are the findings of a new University of Michigan study that surveyed vacant lots in several Detroit neighborhoods for ragweed, counting the number of ragweed plants and estimating how often each lot was mowed.

The researchers found that ragweed was significantly more likely to be present in vacant lots mowed once a year or once every two years—a common practice in Detroit, which has one of the highest proportions of vacant lots in the United States—than in lots mowed monthly or not at all. 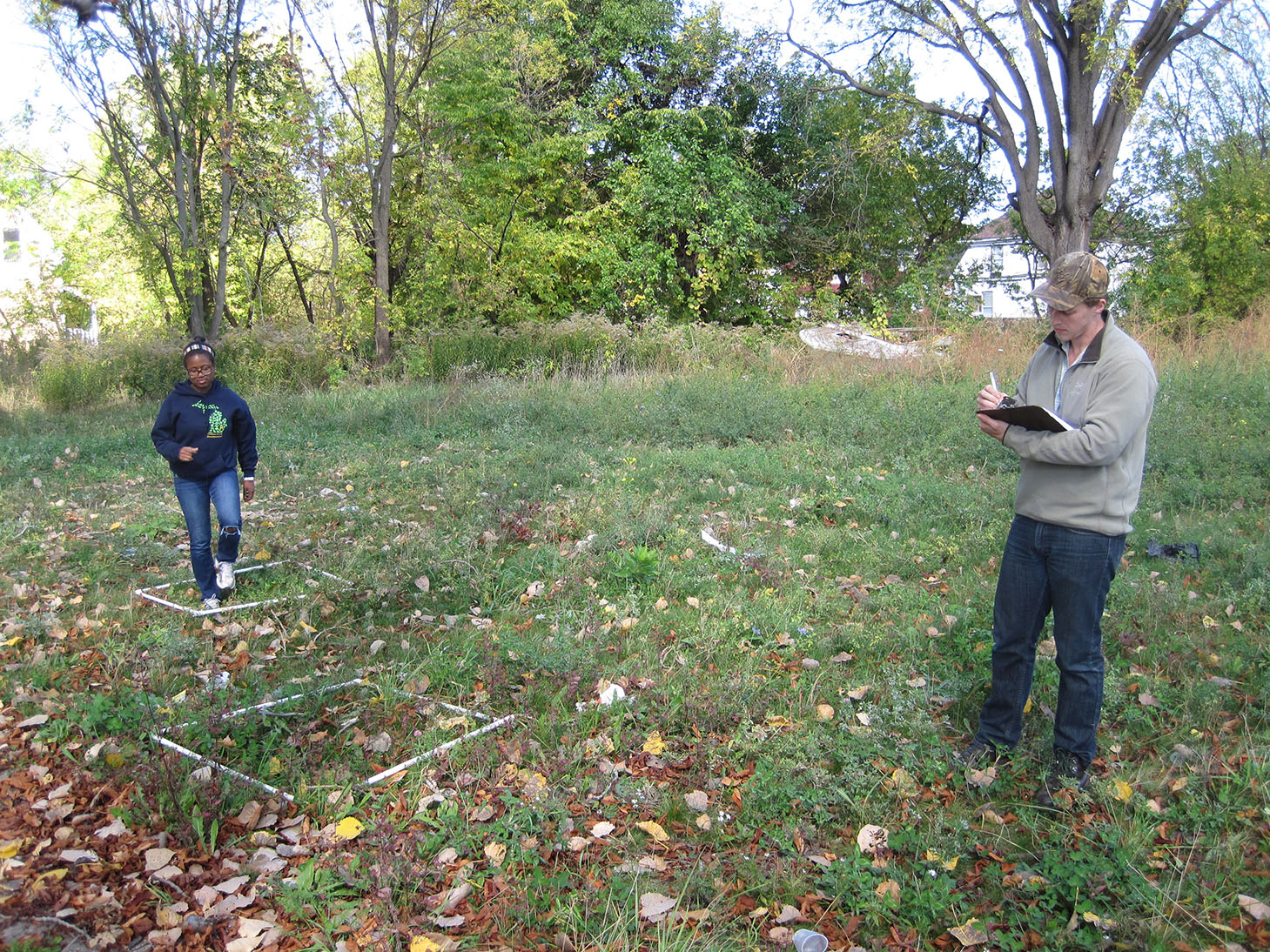 U-M researchers Tiffany Carey (left) and Ben Connor Barrie estimate ragweed density in vegetation plots on a vacant lot in Detroit. Image credit: Daniel Katz“When we surveyed vacant lots, we found that some mowing is worse than no mowing,” said Daniel Katz, a doctoral candidate at the U-M School of Natural Resources and Environment. “This is because occasional mowing, say once a year or once every other year, creates the disturbed conditions in which ragweed plants thrive.”

Katz’s co-authors on the vegetation study are SNRE’s Benjamin Connor Barrie and Tiffany Carey of the U-M Program in the Environment. Katz and Carey co-authored an earlier study that examined the relationships between ragweed pollen production, land use and public health in Detroit.

Based on the findings of the two studies, the authors recommend that vacant lots in Detroit either be mowed regularly or not at all. A report issued May 27 by the Detroit Blight Removal Task Force states there are 114,033 vacant lots in the city. 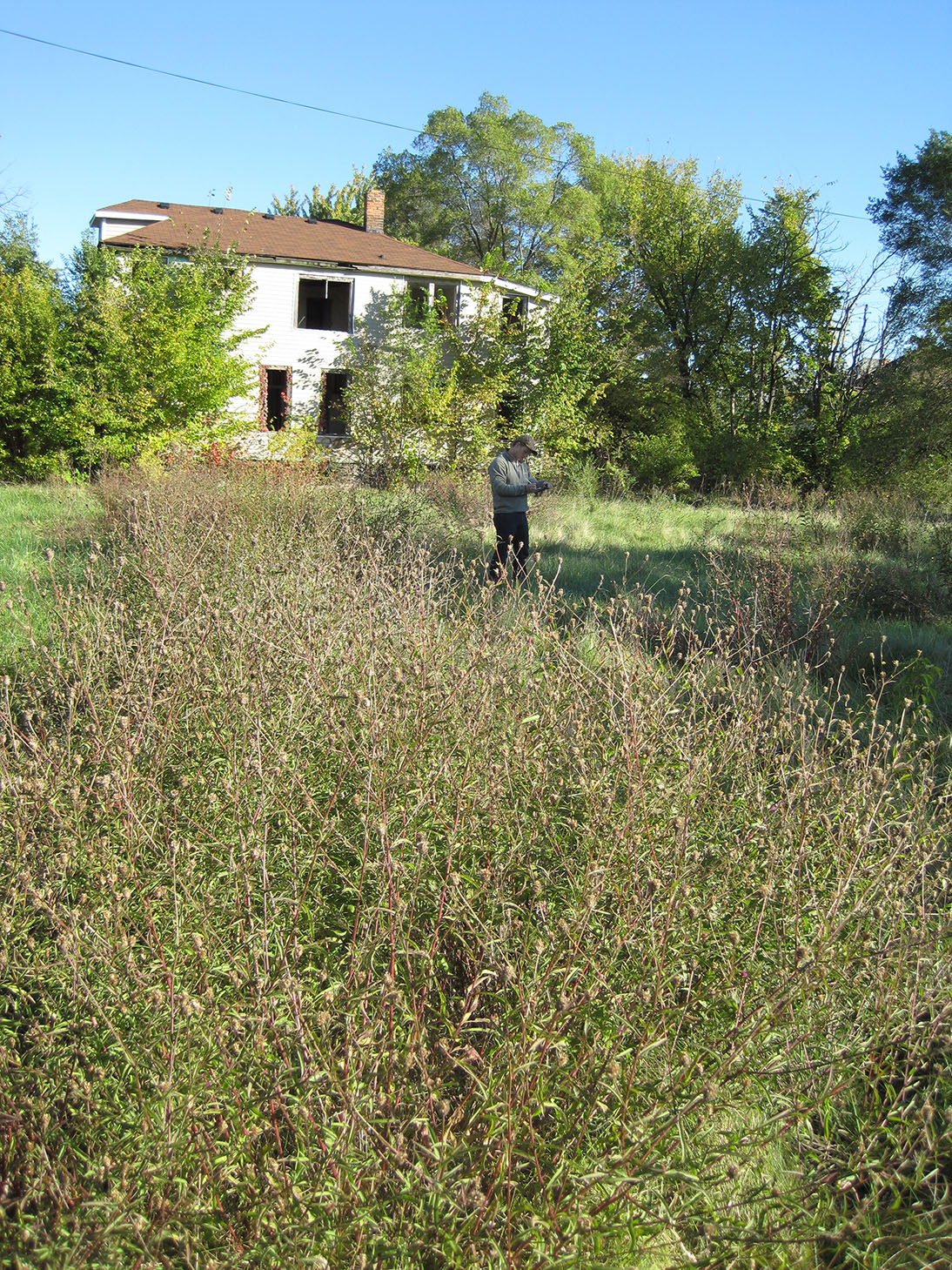 U-M researcher Ben Connor Barrie collecting data about the plants growing on a vacant lot next to an abandoned home in Detroit. Image credit: Daniel Katz“Although allowing vacant lots to reforest is controversial, it is already happening in many places across Detroit. Woody plants are establishing in vacant lots and reclaiming large chunks of Detroit,” Katz said. “Regardless of whether people think that reforestation of vacant lots is a good or bad thing overall, it will have the benefit of reducing ragweed pollen exposure.”

Ragweed pollen is one of the main causes of allergic rhinitis, the seasonally recurrent bouts of sneezing, nasal congestion and itchy eyes commonly called hay fever. There is also some evidence that allergenic pollen can trigger asthma attacks; in Detroit, the asthma rate is 50 percent higher than the rate for the state of Michigan as a whole.

In Detroit, vacant lots are most common in low-income neighborhoods that have large minority populations. Katz and Carey say the results of their land-use study suggest that local production of ragweed pollen disproportionately affects such communities, which raises questions about environmental justice.

The U-M studies found that vacant lots are the main habitat for ragweed in Detroit: Ragweed densities were six times higher in vacant lots than at locations around occupied homes in the city.

Vacant lots contained up to 42 ragweed plants per square meter. When you consider that the tiny, drab flowers of a single ragweed plant can produce up to a billion pollen grains annually, it’s clear that Detroit vacant lots are pollen factories churning out a noxious product that afflicts thousands of city residents. 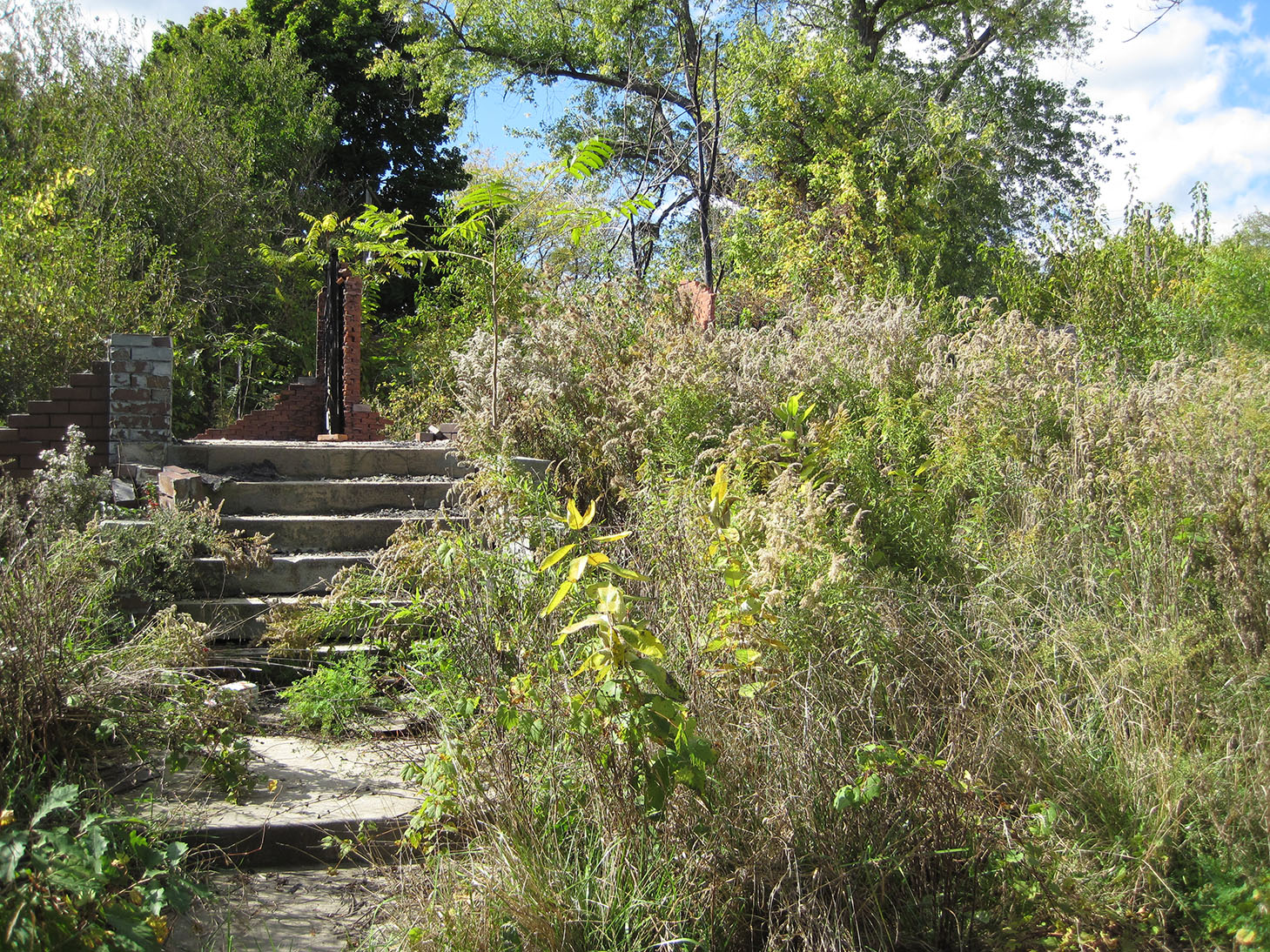 A walkway and steps on a vacant lot in Detroit. Image credit: Daniel KatzThe vegetation survey looked at 62 vacant lots in several neighborhoods, including Mexicantown, Kettering and Core City. The researchers categorized each lot by mowing frequency: monthly, annually, biennially or unmowed.

When the lots are left unmowed, the common perennial plants that replace ragweed include goldenrod, milkweed, Kentucky bluegrass, chicory and aster. When a vacant lot is not mowed for several years, the young trees that can encroach include the Norway maple, silver maple, box elder, cottonwood and tree of heaven.

To determine whether ragweed populations are associated with a particular land-use type in Detroit, Katz and Carey documented the amount of ragweed found in vacant lots, around occupied residences and in city parks. They also set up pollen collectors at 34 sites and analyzed the concentration of ragweed pollen grains collected at each location.

They found that the amount of ragweed pollen in the air at a collection site was determined both by the abundance of ragweed plants within 10 meters (33 feet) of the collector and by the number of vacant lots within 1 kilometer (0.62 miles) of the site. 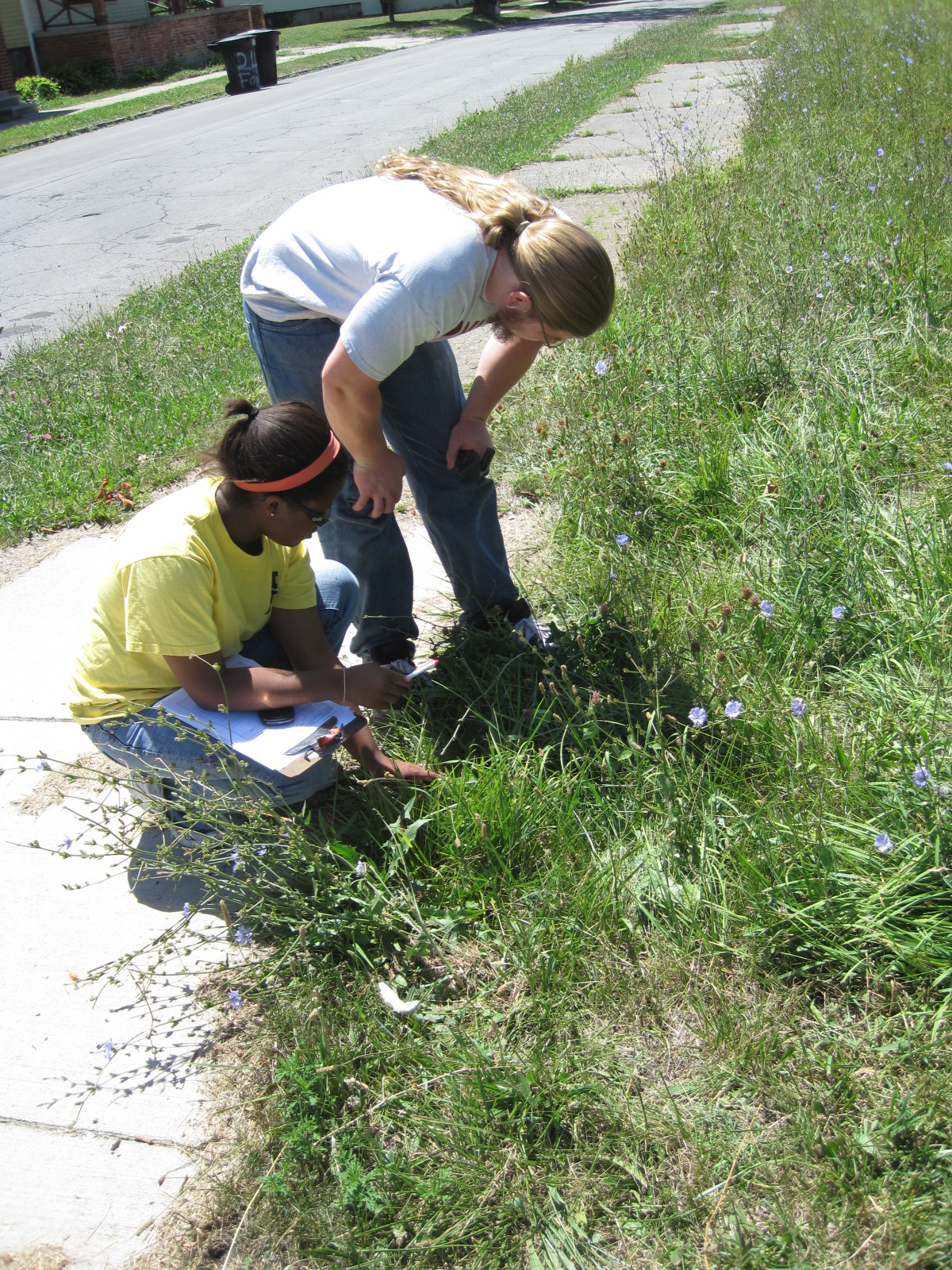 U-M researchers Tiffany Carey (left) and Max Ramsay count ragweed plants on a vacant lot in Detroit. Image credit: Daniel KatzThat result drives home the point that pollen is mainly a local and neighborhood-level problem, even though public health officials have for decades treated it as a regional problem, Katz said. Though individual pollen grains occasionally travel hundreds of miles, previous studies have demonstrated that more than 90 percent of pollen grains travel less than 100 meters from the source plant.

“Because pollen grains can travel long distances, sometimes people make the mistake of assuming that it usually does travel long distances,” he said. “Our Detroit study shows that ragweed pollen is a local problem, and that’s important because it means we can make local management decisions about how to reduce exposure.”

Leaving vacant lots unmowed and allowing some of them to reforest would reduce the allergenic pollen exposure of Detroit residents, according to Katz and Carey. Although reforestation is controversial, it is advocated by the Detroit Future City Strategic Framework, a collaboration between the city of Detroit, the Kresge Foundation and the Detroit Economic Growth Corp., among others.