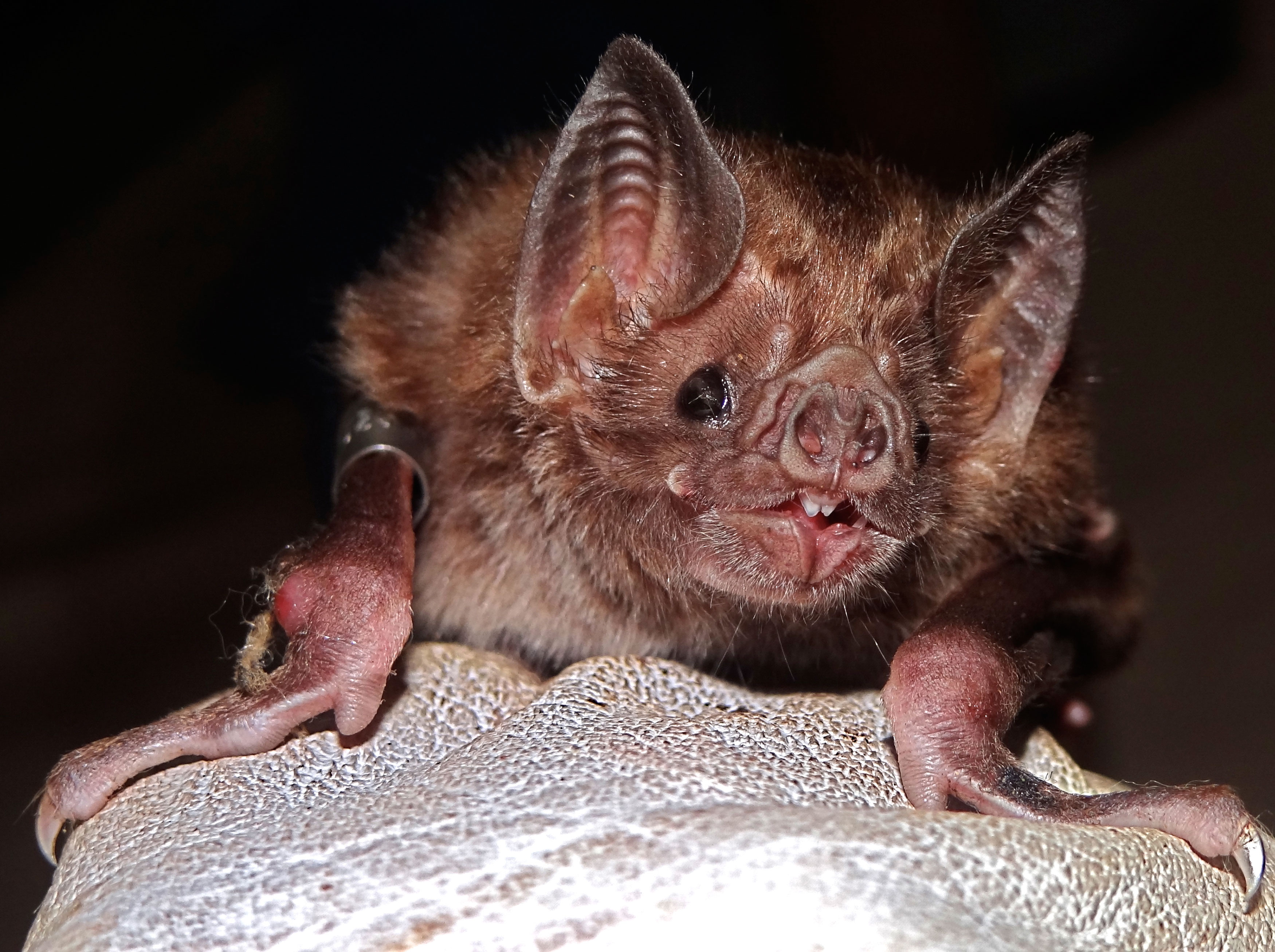 Close-up of a common vampire bat. Photo by Daniel StreickerANN ARBOR—Culling vampire bat colonies to stem the transmission of rabies in Latin America does little to slow the spread of the virus and could even have the reverse effect, according to University of Michigan researchers and their colleagues.

Vampire bats transmit rabies virus throughout Latin America, causing thousands of livestock deaths each year, as well as occasional human fatalities. Poison and even explosives have been used since the 1960s in attempts to control vampire bat populations, but those culling efforts have generally failed.

Last year, a team of U-M researchers and their University of Georgia colleagues reported the results of a long-term vampire bat field study in Peru. Now, the same team has combined the field findings with new computer models of rabies transmission and data from infection studies using captive vampire bats to show that culling has minimal effect on containing the virus, and can, in some cases, actually increase its spread by driving infected bats into neighboring colonies.

The findings suggest that geographic coordination of vampire bat control efforts in Latin America—taking into account the interconnectedness of seemingly isolated colonies—might reduce transmission to humans and domestic animals. The team’s new paper, published online Dec. 2 in the Proceedings of the National Academy of Sciences, also establishes that rabies is usually not lethal among vampire bats.

“In the paper last year, we demonstrated that bat colony size wasn’t a predictor of rabies prevalence, which indicated that culling hadn’t reduced transmission,” said U-M population ecologist and epidemiologist Pejman Rohani, senior author of the PNAS paper (the first author is Julie Blackwood, a former postdoctoral research associate in Rohani’s lab who is now at Williams College).

“In the current paper, we do a number of things. First, we fit models that encompass alternative assumptions regarding this system and we identify an important role of movement between colonies. We then use the best-fitting model to examine what happens under culling, especially if the cull is indiscriminate, rather than targeting infected bats specifically. Again, culling is shown to be ineffective, but now the model helps us understand why that is.” 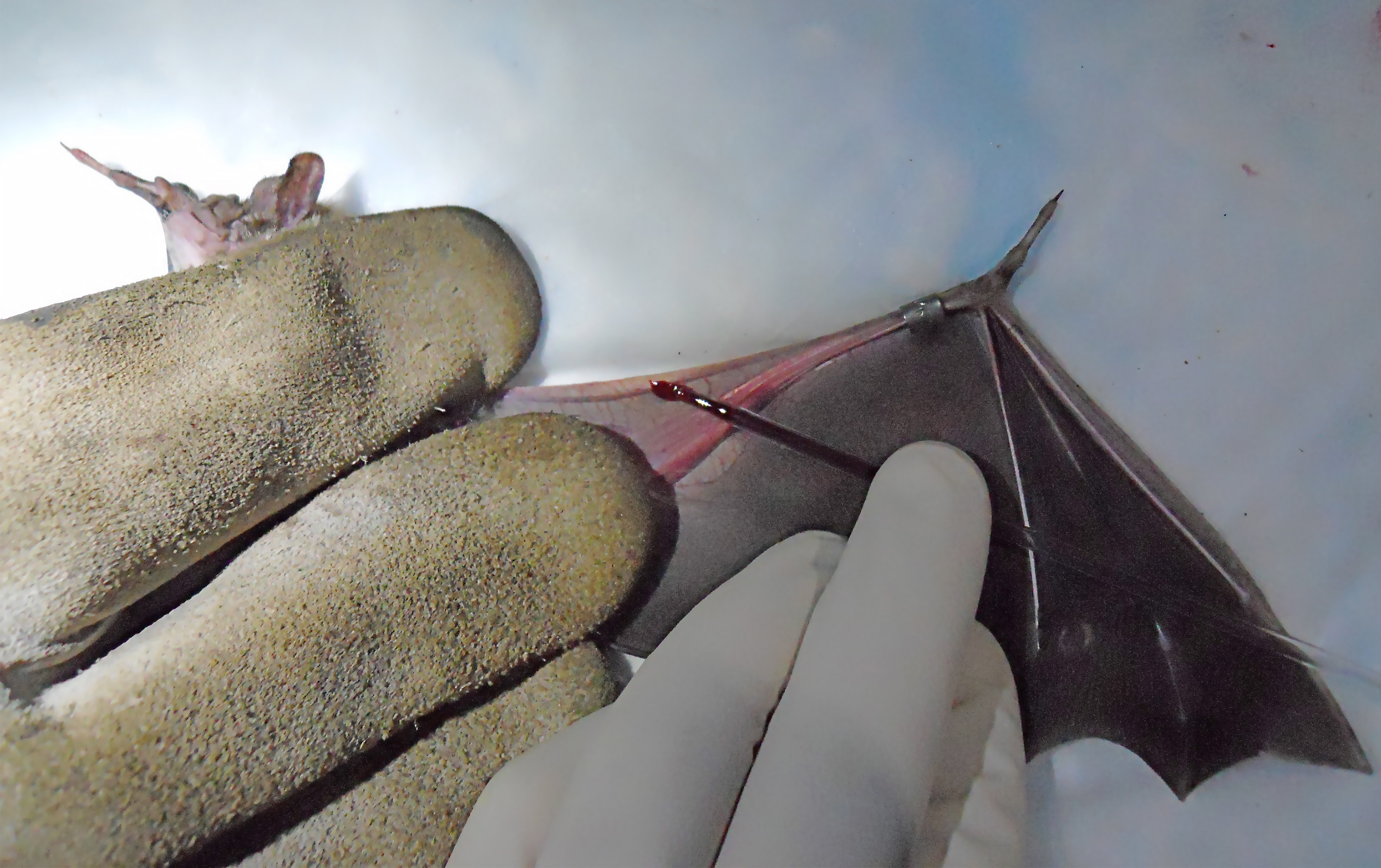 Blood sample being taken from a common vampire bat. Photo by Daniel StreickerDeveloping effective control strategies for vampire bat-transmitted rabies virus in Latin America requires an understanding of the mechanisms that have allowed the highly virulent pathogen to persist despite control efforts. But understanding the persistence mechanisms has proved elusive, despite recognition of the virus and its health risks since the early 1900s.

To determine those persistence mechanisms, Rohani and colleagues created four mathematical models of rabies transmission, each representing an alternative hypothesis for the biology of rabies infection.

Then they tested the models against data from the University of Georgia-led field study of rabies exposures in wild vampire bat colonies across Peru. That study tracked rabies exposures in individually marked Desmodus rotundus vampire bats from 17 colonies in four regions of Peru between 2007 and 2010 and yielded the most complete dataset on rabies exposure patterns ever collected for any bat species, according to the authors of the PNAS paper.

Thousands of computer simulations were run, and the most successful models demonstrated that a single, isolated vampire bat colony cannot maintain the rabies virus over time. Frequent movement of infectious bats between colonies is needed to keep the rabies virus at levels consistent with the field observations. 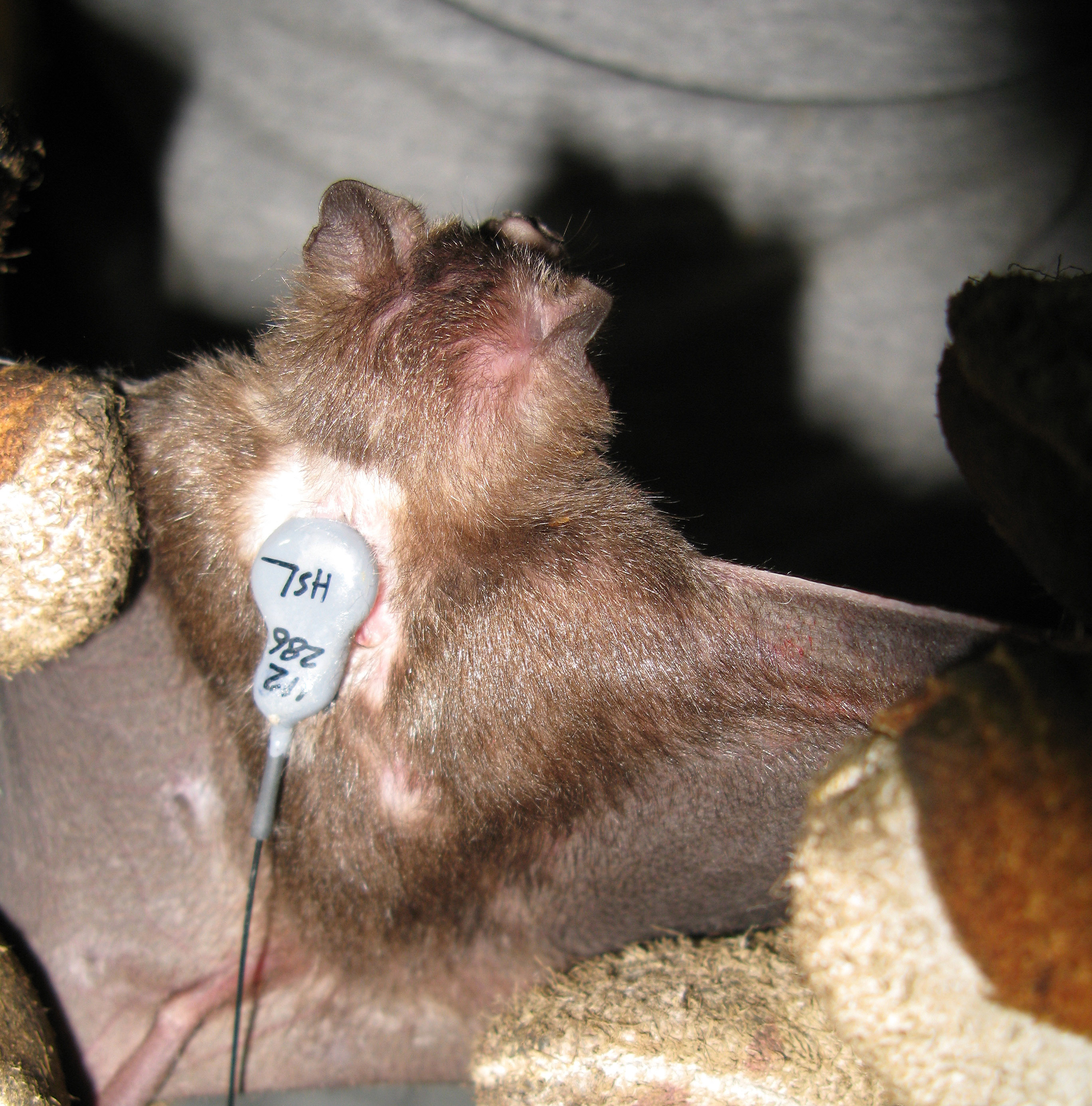 A vampire bat with a radio transmitter attached. The devices were used to track bats back to their roosts in the Amazon. Photo by Daniel StreickerThe critical role of immigration between bat colonies predicted by our analysis indicates that current culling practices, often reactive to outbreaks in livestock or haphazardly implemented, are unlikely to eliminate VBRV (vampire bat-transmitted rabies virus), the researchers said.

“While programs targeting specific colonies may limit local spillover from bats to humans or domestic animals, regional viral persistence will likely remain unaffected due to high connectivity between bat colonies,” Rohani said. “Moreover, if culling increases movement due to freeing up space or disturbance-mediated dispersal, culling could, perversely, have the opposite of the intended effect on rabies transmission.”

Rohani and colleagues say that such a phenomenon has recently been observed in controlled badger culls in the United Kingdom, where disruption of badger social dynamics and subsequent dispersal led to increased tuberculosis transmission in cattle at neighboring sites.

The bat study’s other main finding is that the vast majority of rabies virus exposures among vampire bats—in which an infectious bat bites a susceptible individual—are nonlethal and actually immunize the bitten bat, thus helping to prevent colony extinction and sustain the virus.

The probability of a vampire bat developing a lethal infection upon exposure to rabies is around 10 percent, much lower than the 50-to-90 percent mortality rate seen in previous experimental “challenges studies” that involved inoculating vampire bats with rabies virus, according to the researchers.

In Latin America, coordinated efforts to eliminate human rabies transmitted by dogs began in 1983 and led to a roughly 90 percent reduction in human and canine rabies, according to the U.S. Centers for Disease Control and Prevention. Since 2000, vampire bats have been the leading cause of human rabies there, especially in remote areas of the Amazon region in Peru, Ecuador and Brazil, according to the CDC. 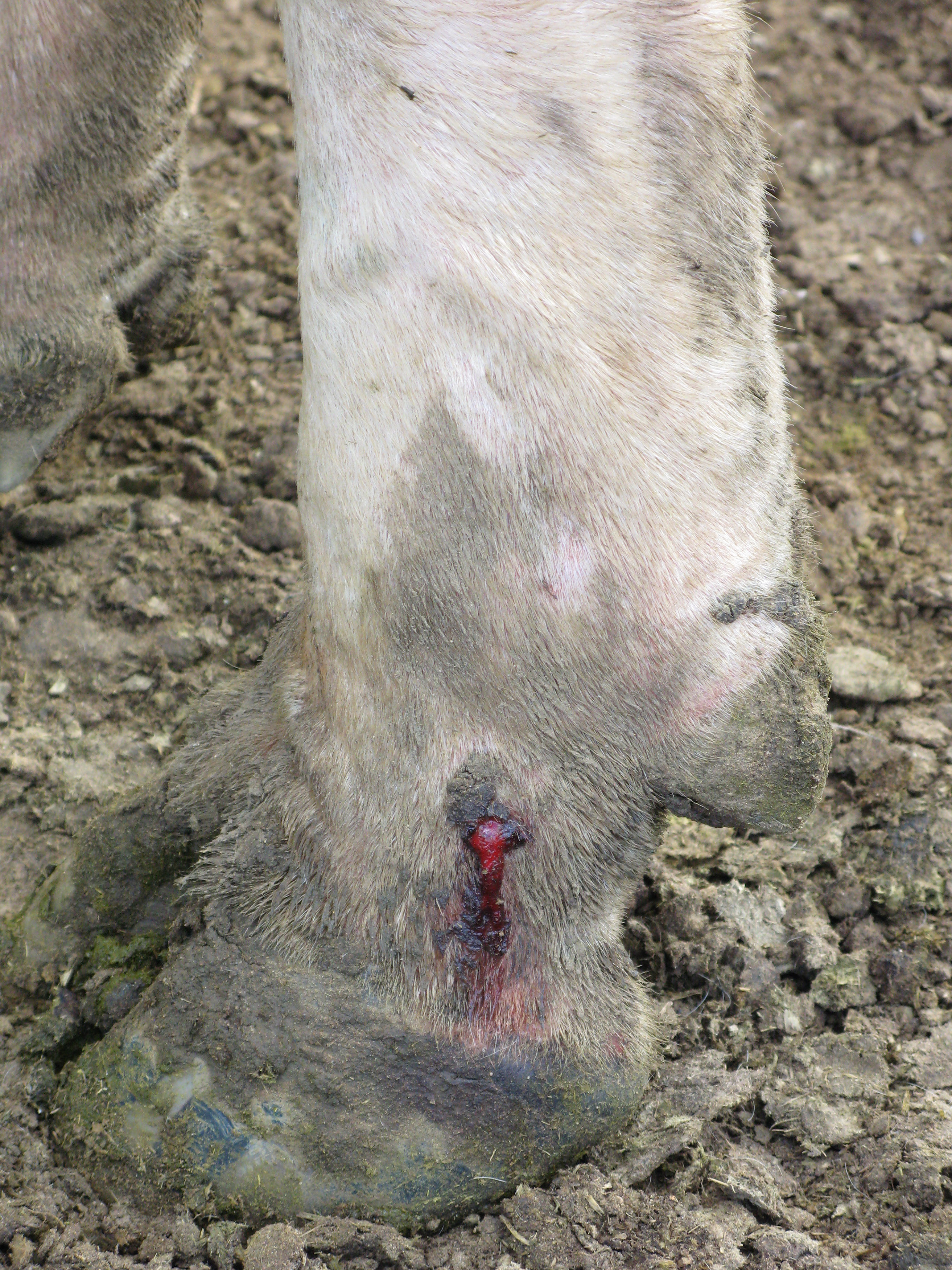 Vampire bat bite above a cow’s hoof. Photo by Daniel StreickerContinued growth of the livestock industry likely exacerbates rabies outbreaks in the region by providing an almost unlimited food source for the blood-feeding bats, fueling population growth and range expansion. The combination of large vampire bat populations and frequent contact with livestock contributes to losses of about $30 million annually in Latin American livestock mortality.

Of more than 1,200 species of bats worldwide, only three are vampires, and all three live in Latin America, according to Bat Conservation International. Two of the species feed primarily on the blood of birds and one—the common vampire bat, D. rotundus—prefers mammals, especially livestock.

Common vampire bats hunt only when it is fully dark and listen for the regular breathing sounds of sleeping mammals, which serve as their main food source. Once a target is located, the bat lands and approaches it on the ground. Vampire bats use heat sensors on their nose to locate warm spots where blood flows through vessels near the skin’s surface.

They use razor-sharp upper incisors to create small wounds. An enzyme in the saliva prevents clotting as the bat feeds, and a specialized groove in the tongue keeps blood flowing without the need for sucking or slurping.

“Movies notwithstanding, vampire bats do not suck blood. They lap it like kittens,” according Bat Conservation International.

Worldwide, more than 55,000 people die of rabies each year, according to the World Health Organization. More than 95 percent of the human deaths occur in Asia and Africa, and dogs are the source of infection in nearly all of those deaths, according to the WHO.