DESI opens its 5,000 eyes to capture the colors of the cosmos 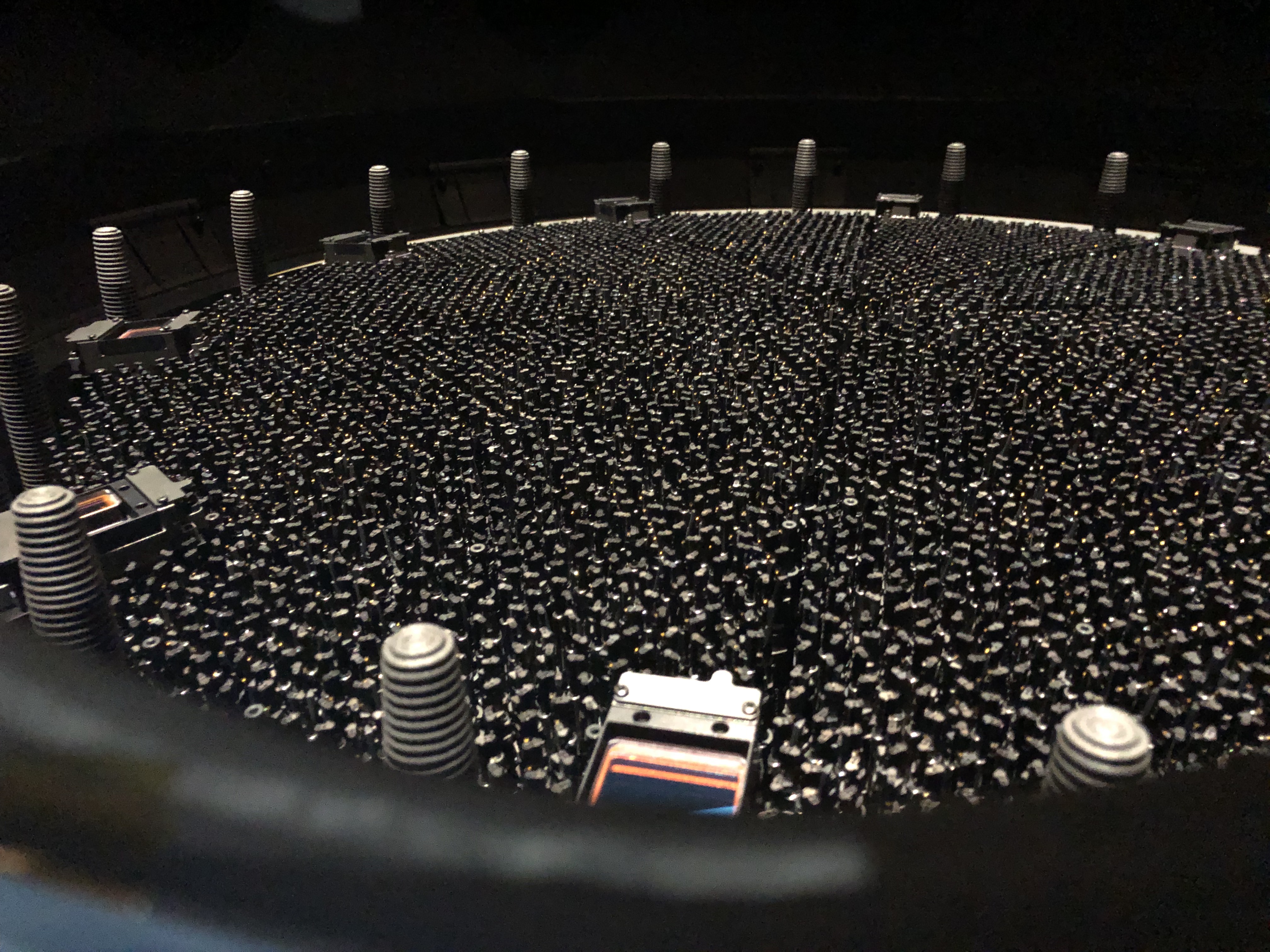 ANN ARBOR—A new instrument mounted atop a telescope in Arizona aimed its robotic array of 5,000 fiber-optic “eyes” at the night sky to capture the first images showing its unique view of galaxy light.

It was the first test of the Dark Energy Spectroscopic Instrument, known as DESI, with its nearly complete complement of components. The long-awaited instrument is designed to explore the mystery of dark energy, which makes up about 68% of the universe and is speeding up its expansion.

The robotic eyes were assembled by students and technicians at the University of Michigan, under the leadership of physics professor Gregory Tarlé. The team delivered a total of 7,300 robotic fiber positioners, including spares.

DESI’s components are designed to automatically point at preselected sets of galaxies, gather their light, and then split that light into narrow bands of color to precisely map their distance from Earth and gauge how much the universe expanded as this light traveled to Earth. In ideal conditions, DESI can cycle through a new set of 5,000 galaxies every 20 minutes.

“After a decade in planning and R&D, installation and assembly, we are delighted that DESI can soon begin its quest to unravel the mystery of dark energy,” said DESI Director Michael Levi of the Department of Energy’s Lawrence Berkeley National Laboratory, the lead institution for DESI’s construction and operations.

Tarlé at U-M led the student teams that assembled the robotic fiber positioners for DESI and related components. He said it’s gratifying to reach a stage in the project where all of DESI’s complex components are functioning together. 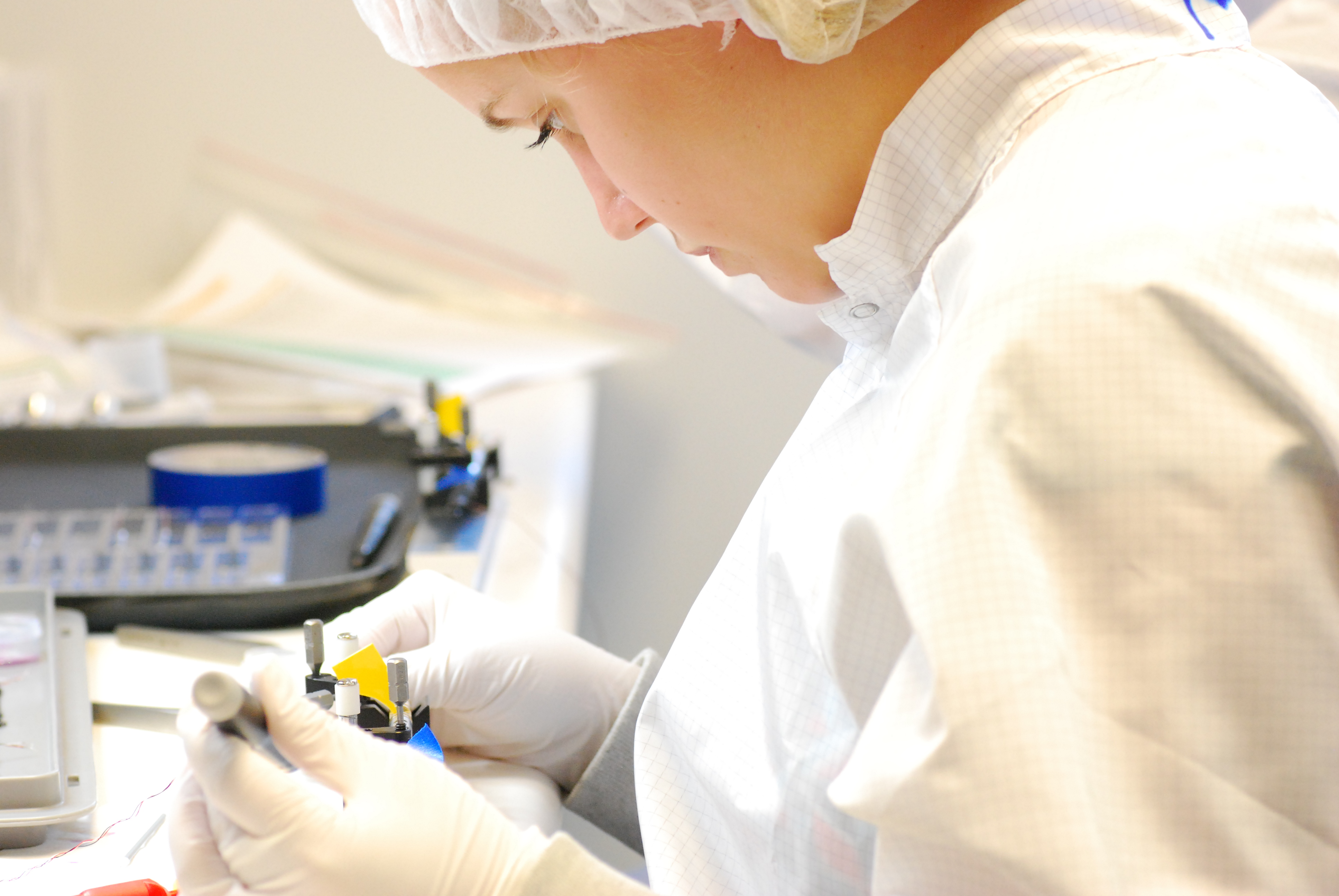 During U-M’s production peak of the robotic fiber positioners, the teams numbered close to 25 students, technicians and engineers, and were churning out about 50 positioners a day.

“It was quite a process,” Tarlé said. “We were at the limits of precision for these production parts.”

The positioners were installed in the focal plane petals at Berkeley Lab and after assembly and testing, the completed petals were shipped to Kitt Peak and installed one at a time on the Mayall Telescope.

Now that the hard work of building DESI is largely done, Tarlé said he looks forward to DESI discoveries.

“I want to find out what the nature of dark energy is,” he said. “We finally have a shot at really trying to understand the nature of this stuff that dominates the universe.”

The latest milestone marks the opening of DESI’s final testing toward the formal start of observations in early 2020.

Like a powerful time machine, DESI will peer deeply into the universe’s infancy and early development—up to about 11 billion years ago—to create the most detailed 3D map of the universe. 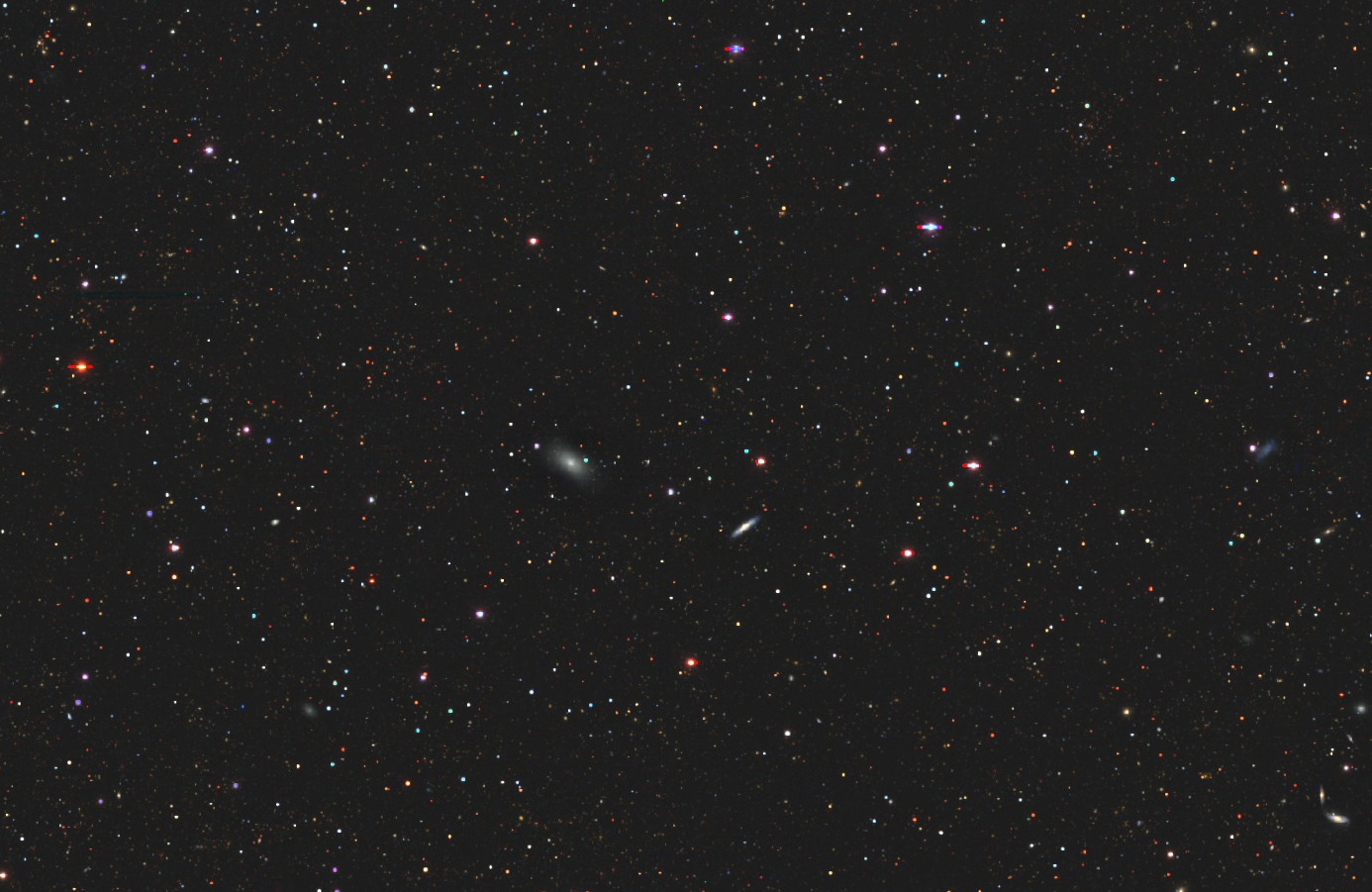 This image shows a view of galaxies and other objects collected by a series of surveys in preparation for DESI, the Dark Energy Spectroscopic Instrument.
Image credit: DESI Legacy Imaging Surveys

By repeatedly mapping the distance to 35 million galaxies and 2.4 million quasars across one-third of the area of the sky over its five-year run, DESI will teach us more about dark energy. Quasars, among the brightest objects in the universe, allow DESI to look deeply into the universe’s past.

DESI will provide very precise measurements of the universe’s expansion rate. Gravity had slowed this rate of expansion in the early universe, though dark energy has since been responsible for speeding up its expansion.

“Most of the universe’s matter and energy are dark and unknown, and next-generation experiments like DESI are our best bet for unraveling these mysteries,” Levi said. “I am thrilled to see this new experiment come to life.”

The DESI collaboration has participation from nearly 500 researchers at 75 institutions in 13 countries.

Installation of DESI began in February 2018 at the Nicholas U. Mayall Telescope at Kitt Peak National Observatory near Tucson, Arizona.

Over the past 18 months, a bevy of DESI components were shipped to the site from institutions around the globe and installed on the telescope.

Among the early arrivals was a 5-ton set of lenses packaged into a large steel barrel. The barrel sits over the 4-meter primary mirror of the Mayall Telescope and provides an expansive field of view. The lenses, each measuring about a meter across, were successfully tested in April.

DESI’s focal plane, which carries 5,000 robotic fiber positioners that swivel in a choreographed “dance” to individually focus on galaxies, is at the top of the telescope. These little robots—which each hold a light-gathering fiber-optic cable that is about the average width of a human hair—serve as DESI’s eyes. 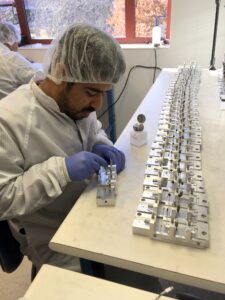 It takes about two seconds for the positioners to swivel to a new sequence of targeted galaxies. With its unprecedented surveying speed, DESI will map over 20 times more objects than any predecessor experiment.

The focal plane, which is composed of a half-million individual parts, is arranged in a series of 10 wedge-shaped petals that each contain 500 positioners and a little camera to help the telescope point and focus. The focal plane, corrector barrel and other DESI components add about 10 tons of weight to the Mayall telescope’s movable arm, which itself weighs about 250 tons and rises 90 feet above the floor in the Mayall’s 14-story dome.

Among the more recent arrivals at Kitt Peak is the collection of spectrographs that are designed to split up the gathered light into three separate color bands to allow precise distance measurements of the observed galaxies across a broad range of colors.

These spectrographs, which allow DESI’s robotic eyes to “see” even faint, distant galaxies, are designed to measure redshift, which is a shift in the color of objects to longer, redder wavelengths due to the objects’ movement away from us. Redshift is analogous to how the sound of a fire engine’s siren shifts to lower tones as it moves away from us.

There are now eight spectrographs installed, with the final two arriving before year-end. To connect the focal plane with the spectrographs, which are located beneath the telescope, DESI is equipped with about 150 miles of fiber-optic cabling.

“This is a very exciting moment,” said Nathalie Palanque-Delabrouille, a DESI spokesperson and an astrophysics researcher at France’s Atomic Energy Commission, who has participated in the selection process to determine which galaxies and other objects DESI will observe.

“The instrument is all there. It has been very exciting to be a part of this from the start,” she said. “This is a very significant advance compared to previous experiments. By looking at objects very far away from us, we can actually map the history of the universe and see what the universe is composed of by looking at very different objects from different eras.”