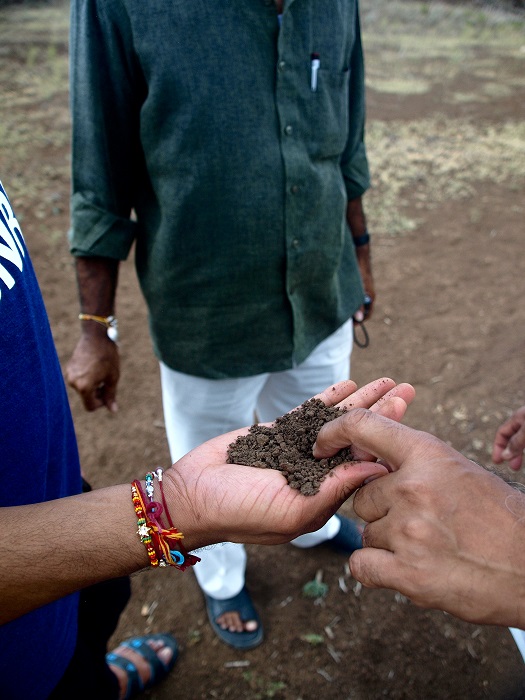 Silt sample from ponds. Image credit: John MonnatANN ARBOR—Students from the University of Michigan are developing a low-cost way to increase crop yield and reduce the use of fertilizers for Indian farmers.

In a year-long study in India’s southeastern state of Telangana, the students are using silt dug up from ponds during the dry season as fertilizer for farm fields.

The results are stunning: The silt reduced the use of fertilizers by 36 percent and increased the crop yield by nearly 50 percent.

“The most striking finding is that it reduces greenhouse emissions from less fertilizer use by 50-to-90 percent,” said John Monnat, a graduate student in U-M’s Taubman College of Architecture and Urban Planning.

The idea for the project started with Adithya Dahagama, a graduate student in the U-M School of Natural Resources and Environment, whose father is a farmer in the region. Dahagama worked with the Hyderabad-based nonprofit FREEDOM on a similar project before coming to U-M.

“There’s been no comprehensive study conducted to see if silt application worked, and what were the successes,” said Dahagama, who is pursuing a dual degree at SNRE and the Ford School of Public Policy.

Local officials have noticed the results. Last year, the Telangana government introduced Mission Kakatiya—a large-scale program to desilt 46,000 ponds over the next five years. The impact will be felt across 11,000 villages and will affect 21 million villagers.

While the government has not acknowledged if the results from U-M students led to Mission Kakatiya, they have supported the research by the students.

These ponds, built in the region around the 13th century, store rainwater from the monsoon season and form an intricate part of farming in the area. Over time, silt has been filling the ponds, reducing their capacity.

Most of the desilting of the ponds happens during the summer months when the tanks are dry. With a mix of manual and mechanical means, the silt is dug out and then transported on tractors to the nearby fields. 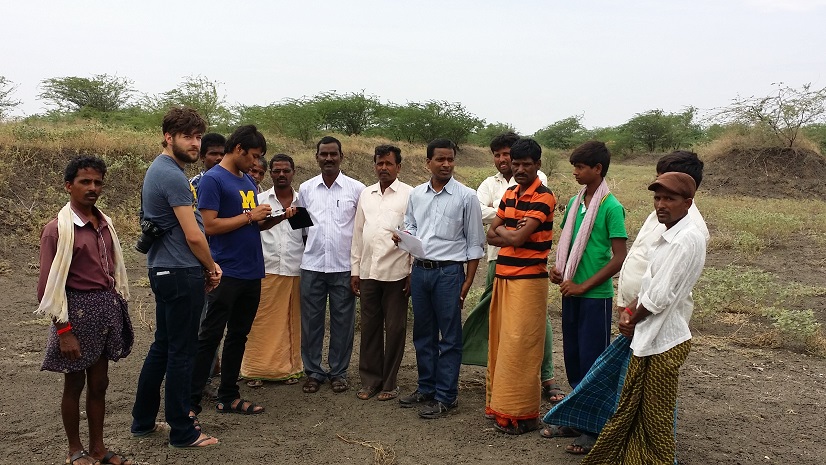 U-M students John Monnat and Adithya Dahagama talk to farmers. Image credit: D. UmamaheshwarMonnat and Dahagama also worked with Leon Espira, a student in U-M’s School of Public Health. They were part of the Dow Sustainability Fellows program at the U-M, which supports 75 graduate fellows working on interdisciplinary sustainability projects. They credit the program for approaching the problem through many facets—social, economic, environmental and health.

“I would never have gotten a chance to learn about a new country and look at the impact of our program otherwise,” Espira said.

Espira, who grew up in Kenya, is exploring the health effects of desilting the ponds. He said that Telangana has some of India’s highest amount of cases of fluorosis, which darkens the teeth and leaves bones crooked.

The U-M team, which now has seven members, is examining groundwater data before and after desilting to check the fluoride levels.

“We think that desilting will allow more groundwater to recharge the tanks, which may reduce the fluoride levels in water,” Espira said.

The researchers are also working with the Central Research Institute for Dryland Agriculture in Hyderabad, the capital city of Telangana, to collect and test soil and water samples before and after desilting.

The farm field on the left has been treated with silt. Image credit: John Monnat“Working with a local partner institution has really helped us understand the key issues and complete the research in a timely manner,” said Monnat, who is conducting geospatial research that involves creating maps with desilted ponds and crop output.

To educate farmers about the application of silt, the students organized several farmer meetings in and around the village of Nalagonda.

“We explained the importance of silt application to the farmers, and they were interested. They are able to see the results in one year,” said Dahagama, who is planning to do more meetings this year.

The government of Telangana is also interested in collaborating with the U-M team.

“We are advisers at this point, as we’re gathering data and influencing policy,” Monnat said. “This upcoming trip will solidify and clarify those ties and roles.”

Dahagama hopes their research will help farming families envision a future around farming and slow the migration of people into urban areas.