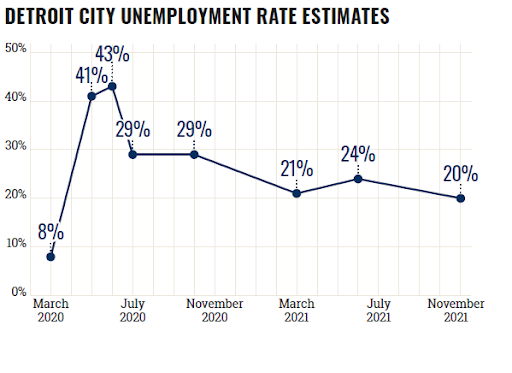 Detroit’s unemployment rate—the proportion of adults who are in the labor force but not currently employed—remains at 20%, virtually unchanged over the course of 2021, according to a new University of Michigan survey.

The most recent survey from the Detroit Metro Area Communities Study highlights significant disparities in who is most affected by unemployment in Detroit. Among those in the labor force, people of color, low-wage earners and residents without four-year college degrees are more likely to be unemployed than other residents.

Lower-income Detroit residents stood out, with more than 4 out of 10 Detroiters who are in the labor force and have annual household incomes of less than $30,000 indicating they were not currently working.

The wave of employees who voluntarily resigned from their jobs during the pandemic, often referred to as the “Great Resignation,” was also evident among Detroiters. About 38,600 Detroiters in the labor force said they had quit, resigned or voluntarily left a job in the last year.

When asked why they left their job, the most common reason was to take a better employment opportunity. Many Detroiters also cited the pandemic as a reason they had left work, ​​including unsafe working conditions, unvaccinated colleagues and uncertain work schedules. 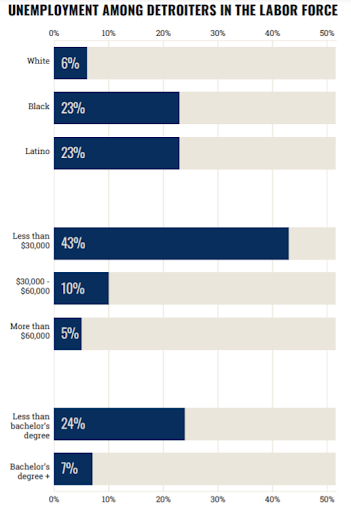 “The pandemic has caused large shifts in Detroit’s labor market, from the types of jobs people are pursuing to who is willing and able to work right now,” said Elisabeth Gerber, one of the faculty research leads for DMACS, professor of public policy and research associate in the Center for Political Studies at U-M’s Institute for Social Research.

“The latest DMACS survey shows the uneven nature of the economic recovery, and Detroiters’ experiences suggest there is a need for both job training programs that prepare Detroiters for high-demand employment sectors as well as significant investment into the safety and quality of all employment opportunities.”

Nearly 1 of every 4 parents who are not in the labor force (23%) reported they stopped working within the past year—three times the rate of other Detroiters who are out of the labor force. Interestingly, however, the researchers did not find that women were more likely than men to have recently exited the labor force.

Other key findings include:

DMACS has been surveying representative samples of Detroit households since 2016. The latest wave of the survey was open from Nov. 3 to Dec. 15, 2021, and captures the views of 1,900 residents. Survey responses are weighted to match Detroit’s population demographics.