Di Suvero sculpture to be reinstalled ahead of U-M appearance, presentation of honorary degree 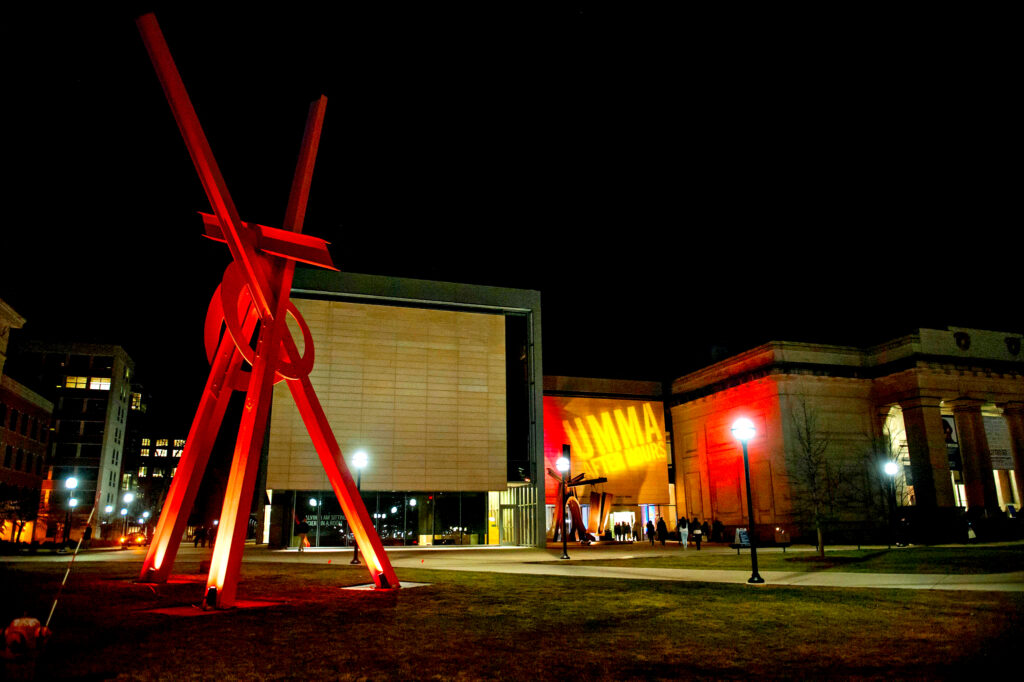 Mark di Suvero’s sculptures “Orion” (foreground) and “Shang” (background) have welcomed visitors to the U-M Museum of Art since 2009. After a year of restoration work, “Orion” returns to campus April 2019.

ANN ARBOR—After a yearlong hiatus, an iconic work of public art—along with the artist who created it—will return to the University of Michigan’s central campus next week.

A day after the return of his sculpture, the internationally renowned artist will participate in a public conversation with UMMA Director Christina Olsen at 5 p.m. April 24, where they will discuss the significant role that public art plays on a university campus.

Mark di Suvero is one of last living abstract expressionist artists, and arguably the most
important 20th-century American sculptor of outdoor, public art. An opportunity to hear from him is a rare occurrence, especially with one so steeped in the concerns of our present social, political and environmental debates.

“Mark di Suvero is one of last living abstract expressionist artists, and arguably the most
important 20th-century American sculptor of outdoor, public art,” Olsen said. “An opportunity to hear from him is a rare occurrence, especially with one so steeped in the concerns of our present social, political and environmental debates.”

According to Olsen, who also chairs the U-M President’s Advisory Committee on Public Art, di Suvero’s visit is part of a “reimagining” of U-M’s public art program.

“This is a moment for the community to come to together to hear about and discuss what the impact of a collection like U-M’s can have on the future of the university and the world,” she said.

U-M President Mark Schlissel will be present April 24 to welcome di Suvero, who will also receive an honorary Doctor of Fine Arts degree at U-M’s Spring Commencement ceremony May 4 at Michigan Stadium.

Initially exhibited at Chicago’s Millennium Park, di Suvero’s “Orion” (2006) first arrived at UMMA as a long-term loan in 2008, helping to celebrate the Museum’s then-new Maxine and Stuart Frankel and the Frankel Family Wing. In April 2018, it was removed in preparation for storm water repairs on UMMA’s grounds, which provided an opportunity to send the sculpture back to the artist’s studio in New York for some conservation and a fresh coat of vibrant orange-red paint.

The sculpture, which has become an Ann Arbor landmark in recent years, is one of two of di Suvero’s massive steel works that welcome visitors to UMMA—”Shang” (1984-85) is a kinetic sculpture that invites passersby to “swing” on its suspended platform.

Born in Shanghai in 1933, di Suvero immigrated to the U.S. in 1941 and received a bachelor’s degree in philosophy from the University of California, Berkeley. He has received several honors in his career, including a Lifetime Achievement in Contemporary Sculpture Award from the International Sculpture Center in 2000 and a National Medal of Arts in 2010.

UMMA’s “In Conversation” program is co-sponsored by the University of Michigan President’s Advisory Committee on Public Art.