While new University of Michigan COVID guidelines are requiring most undergraduates to study from their homes for the winter semester, some classes—classes that are nearly impossible to conduct online—will continue to be taught in person.

Biochemistry 352 is one such class. There’s something essential about being in a lab to learn this kind of science, says U-M researcher Neil Marsh. 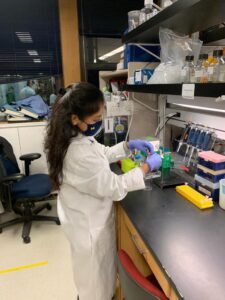 “It’s the difference between driving a car and reading a book about driving a car. We think of lab experience as being mission-critical to teaching the undergraduates,” said Marsh, professor of chemistry in the College of Literature, Science, and the Arts and professor of biological chemistry at Michigan Medicine. “We did run remote labs but it’s a very, very poor substitution for a real lab.”

Chemistry, he says, more than other types of science, relies on hands-on learning in the lab. Students in his Biochemistry 352 class learn basic biochemical techniques critical to performing experiments in chemistry. Seemingly straightforward skills such as using pipettes can be more complex when students use the instruments in person.

Of course, the ability to teach students these techniques was upended as the university attempted to deal with the coronavirus pandemic. During the fall semester, just 20% of class credit hours were offered in person.

The chemistry department revamped classes to ensure they met safety protocols. Marsh’s course includes about 100 students and typically involves a lecture and four sections of labs. Now, Marsh records 15-20 minute videos on certain topics that the students then watch before they attend their lab.

Typically, each of the four lab sections would meet once a week, with 16 students and one graduate student instructor leading the section. Now, only six people are allowed in a lab—five students and a graduate instructor—at a time. For all of the 100 students in the class to attend lab, extra sections had to be added and students attended lab every other week.

A survey was given to graduate student instructors to get their preferences as to whether or not they were willing to teach in person, and the only people that saw the results were the department’s associate chair and one staff member.
Robert Kennedy

“A survey was given to graduate student instructors to get their preferences as to whether or not they were willing to teach in person, and the only people that saw the results were the department’s associate chair and one staff member,” said Robert Kennedy, chair of the Department of Chemistry. “The bigger point is that nobody was, or will be in winter, assigned to an in-person section if they do not want to teach an in-person section.”

If no instructor wants to teach an in-person lab during the winter, Kennedy says, the department will hold no in-person labs.

In September, the Graduate Employees’ Organization called a strike to address health and safety concerns for GEO members working on campus. The group called for increased COVID testing, among other considerations. The organization ended its strike Sept. 16, accepting a stronger process to address these concerns. Now, for the winter semester, U-M will pare down the number of students on campus, reducing density in undergraduate residence halls and including increases in asymptomatic testing to detect virus infection.

Srijoni Majhi is one of the graduate students who volunteered to teach a lab section during the fall semester. She says she initially felt hesitant because she didn’t want to spread the virus to her labmates and roommates.

“It’s not me alone. I have a roommate, and then I have my other labmates,” Majhi said. “If I’m exposed, then it’s certain that the other people will be suffering because of me. But I talked to my labmates and they were very supportive.”

Ironically, students may be safest in the biochemistry lab, says Marsh. Lab coats, gloves
and goggles have long been required wear, and students, as everywhere on campus, are required to wear masks. Graduate student instructors also disinfect the labs after every class.

“There’s also very good ventilation in the lab,” Marsh said. “In some ways, they’re actually much safer doing our lab course than they are pretty much anywhere else on campus, in terms of risk of exposure to the virus.”

It’s the ability to teach experiments that Majhi found most necessary in having an in-person lab—especially this course, which is a new class. Students are familiar with general chemistry, and some students have already worked in research biology or biochemistry labs in other parts of the university. But for other students, this class is their introduction to the subject.

“This is a 300-level course, so the students come very prepared to lab, but there are still students who we still have to help,” she said. “We have to keep in mind this is a very new biochemistry lab, so many of them are not aware of how to use pipettes or work with enzymes, or other simple techniques.”

Jack Toor is an undergraduate who opted to take the in-person lab. A biochemistry major, Toor has done research in the U-M School of Dentistry. The first hands-on experience to surprise him? Pipetting.

“We did this experiment in the beginning of our lab which seemed on the surface very lame. It was just learning how to use pipettes,” said Toor, who plans to apply to medical school. “I have been using those in my dental lab for a very long time, but I had never thought about how accurate they are, even after calibration.”

The simple experiment involved asking the students to pipette ever-smaller amounts of water—down to 20 microliters.

“I’ve never realized, once you get down to such low volumes, it actually is quite inaccurate,” he said.

Another experiment the undergraduates performed was to identify proteins based on their molecular weights. The students put proteins in an acrylamide gel and ran an electric current through the gel. This arranges the proteins in proportion to their mass. Toor said to conduct this experiment himself was more valuable than being given the parameters of the experiment in an online format. After all, experiments shown in a video typically don’t contain a blooper reel.

“When I took my gel out of its casing, it ripped, and that’s something your textbook never talks about,” Toor said. “I talked to Srijoni about it, who told me after I stained it, I would still be able to piece it back together. It’s little things like that that your textbook wouldn’t mention.”

The changes the chemistry department has had to implement to meet safety requirements do have their silver linings, Marsh says. Although students are in the lab less frequently, the time they spend there might be higher quality. The student-to-teacher ratio is lower, and instead of having to share lab equipment to perform experiments with a partner or group, each student has his or her own equipment.

“Now there’s a much better teacher-to-student ratio in the lab, and students can really get the attention and help they need. Even though they’re only coming in every other week, we now have enough equipment that every student can do the experiment themselves,” Marsh said. “We’ve also really prioritized the fact that we’re going to use that whole four-hour period. … What we’ve seen is that the students have come to lab very focused. They really get down and do the work.”