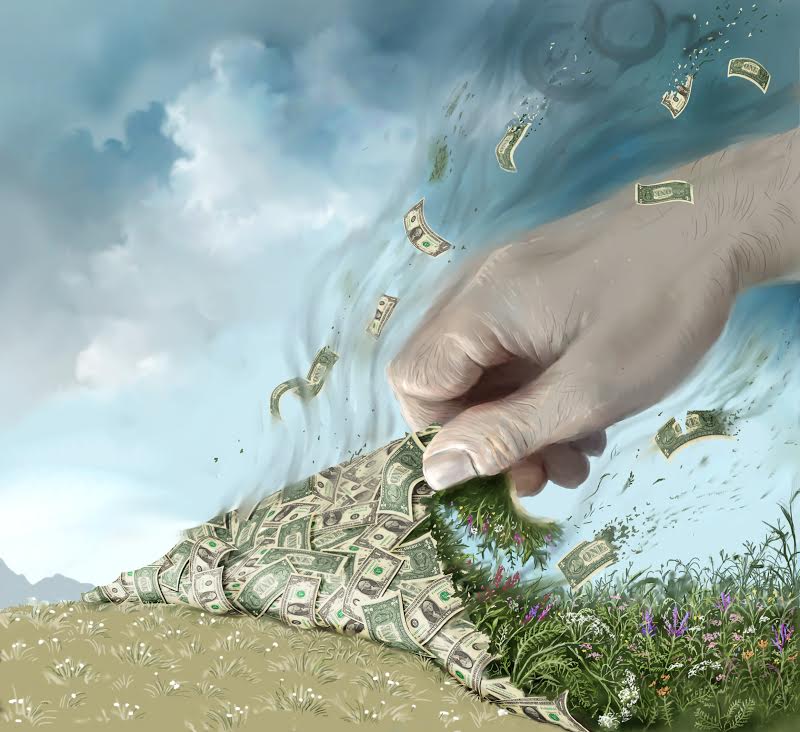 Biodiversity confers economic value by promoting the critical ecosystem service of carbon storage. When biodiversity declines as human activity causes biological communities to become simplified, that economic value is lost. Illustration by Victor Leshyk.ANN ARBOR—A collaboration of scientists has developed one of the first models to assign a dollar value to the loss or gain of species in an ecosystem. The new work offers an economic argument for preserving biodiversity.

The findings were published April 5 in Science Advances. The lead author of the paper is Bruce Hungate of Northern Arizona University. University of Michigan ecologist Bradley Cardinale is a co-author.

“It’s long been thought that biodiversity is valuable, but it’s been hard to quantify that value in monetary terms,” said Hungate, director of NAU’s Center for Ecosystem Science and Society. “We tackled this by blending models of ecology and economics to make explicit, quantitative estimates about the value of species richness for carbon storage, one of the many ways species in nature provide value to people.”

“What our study shows is that naturally diverse ecosystems—habitats with a greater variety of plant species—are better at removing carbon dioxide from the atmosphere as plants photosynthesize,” said U-M’s Cardinale, director of the Cooperative Institute for Limnology and Ecosystems Research and a professor at the School of Natural Resources and Environment.

“Therefore, ecosystems with a greater variety of plant species are worth more money on the carbon market because they remove more CO2 from the atmosphere. Essentially, biodiversity helps protect society from the economic impacts of climate change, and conserving biodiversity has measurable value.”

To build their model, the researchers first had to identify some measurable service of biodiversity that society has priced. While biodiversity provides many valuable services, concern about climate change has led economists to put a dollar value—ranging between roughly $40 and $400 per metric ton—on the abatement of climate-warming carbon emissions. And now there’s a $175 billion global carbon market that pays for activities that remove carbon from the atmosphere.

Biodiversity could enter the game through a billions-of-years-old form of carbon storage that plants provide: photosynthesis. Plants absorb carbon dioxide for energy and growth, storing the carbon in their leaves, stems and roots, and later transferring it to the soil through decay. The key is to link biodiversity and carbon storage in a quantitative way. So researchers asked: Will changing the number of plant species in an ecosystem affect the amount of carbon the ecosystem stores over time? 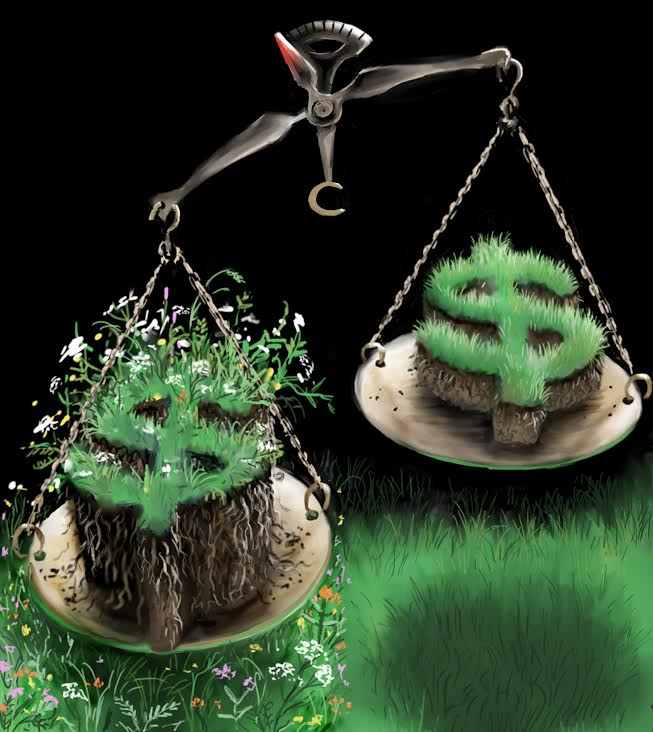 Grasslands with higher biodiversity (left) store more carbon than grasslands with simpler communities (right). Carbon storage in ecosystems has economic value because of the social cost of carbon emissions and associated climate change. Illustration by Victor Leshyk.U-M’s Cardinale received a grant from the National Socio-Environmental Synthesis Center to convene the team of scientists, which included economists and ecologists. They analyzed data from two long-term experiments in Minnesota grasslands that measured how plant and soil carbon changed with the number of plant species in a plot.

Modeling results over 50 years, they estimated the “marginal” increase in carbon storage, or how much additional carbon is stored for every species added to the mix.

Each additional species in a grassland plot increased the plot’s overall carbon storage, on average. One reason for this gain may be that new species can fill new niches, yielding more overall growth.

But with more species came diminishing returns in cumulative carbon storage. A change from five to six species stored almost 10 times more carbon than a change from 15 to 16 species, showing that the biggest benefit came from adding species to the least diverse plots.

At small scales, such as 1 hectare (2.47 acres), going from one to two plant species over a 50-year period would store an additional 9.1 metric tons of carbon, potentially saving $804.55 per hectare based on a mid-range estimate ($137 per metric ton) of the social cost of carbon.

At larger scales, cost savings could hypothetically be significant. For example, adding just one species to the 12.3 million hectares of cultivated lands restored to grasslands by the U.S. Department of Agriculture’s Conservation Reserve program could save over $700 million. The biggest cost savings come from restoring the most degraded, species-poor lands.

“The social cost of carbon is a measure, in dollars, of the long-term damage done by a ton of carbon dioxide emissions in a given year. This dollar figure also represents the economic benefit of removing a ton of CO2 from the atmosphere,” Cardinale said.

“Engineers have yet to come up with a way to remove large amounts of carbon from the atmosphere and store it underground. But guess what? Plants have been doing this job for us naturally for billions of years. Conserving natural habitats with their diversity of plant species will naturally scrub carbon out of the atmosphere and replace it with life-supporting oxygen.”

Some funding for the project was provided by the U-M Energy Institute’s “Beyond Carbon Neutral” initiative.