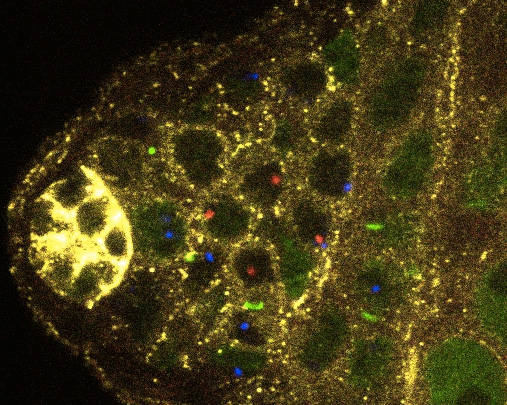 The apical tip of fruitfly testis containing germline stem cells and differentiating germ cells. Copies of Y chromosome are marked with either red or blue. Using this method, the authors discovered that germline stem cells inherit specific copies of Y (and X) chromosomes. Image credit: Yukiko YamashitaANN ARBOR—The human body contains trillions of cells, all derived from a single cell, or zygote, made by the fusion of an egg and a sperm. That single cell contains all the genetic information needed to develop into a human, and passes identical copies of that information to each new cell as it divides into the many diverse types of cells that make up a complex organism like a human being.

If each cell is genetically identical, however, how does it grow to be a skin, blood, nerve, bone or other type of cell? How do stem cells read the same genetic code but divide into very different types?

Researchers at the University of Michigan have found the first direct evidence that cells can distinguish between seemingly identical copies of chromosomes during stem cell division, pointing to the possibility that distinct information on the chromosome copies might underlie the diversification of cell types.

Scientists in the lab of Life Sciences Institute researcher Yukiko Yamashita explained how stem cells can distinguish between two identical copies of chromosomes and distribute them to the daughter cells in a process called nonrandom chromosome segregation. They also described the genes responsible. Their work is scheduled to be published online May 5 in Nature.

“If we can figure out how and why cells are dividing this way, we might be able to get a glimpse of how we develop into a complete human, starting from a single cell,” Yamashita said. “It is very basic science, but understanding fundamental biological processes always has wide-ranging implications that could be exploited in therapeutics and drug discovery.”

During the cell division cycle, the mother cell duplicates its chromosomes, generating two identical sets. When the cell divides to become two cells, each cell inherits one set of chromosome copies. In many divisions, the daughter cells are identical to the mother—one skin cell becomes two, for instance.

The Yamashita lab used stem cells from the testes of the fruit fly Drosophila to study the process of cell division.

“The Drosophila germ line stem cell can be identified at a single-cell resolution, so they are an ideal model,” Yamashita said.

The stem cells cluster and are easy to identify; they divide to produce another germ line stem cell and a differentiating cell called a gonialblast, which goes on to eventually become a sperm cell.

The researchers marked the copies of each chromosome in the Drosophila stem cells as they divided. Using this method, they tracked the tendency of the X and the Y chromosome copies to move to the daughter germ line stem cell or to the gonialblast. They were able to demonstrate that copies of X and Y chromosomes (but not other chromosomes) are distinguished and delivered to the daughter cells with a striking bias.

This is the first direct evidence that cells indeed have an ability to distinguish identical copies of chromosomes and separate them in a regulated manner. This ability has been suspected and hypothesized, but never proven.

“We do not know yet why copies of X and Y chromosomes segregate nonrandomly,” Yamashita said. “We think maybe specific epigenetic information is transmitted to the germ line stem cell and to the gonialblast.”

The findings suggest that the information on the X and Y chromosomes that makes this division possible is primed during gametogenesis—the process of creating ovum or sperm cells—in the parents.

Many other cells throughout the body are able to divide into two different types, especially during embryonic development. Yamashita’s next steps are to explore whether the nonrandom chromosome segregation seen in Drosophila is a widespread phenomenon that is shared by mammals, including humans.

Yamashita is a faculty member of the Life Sciences Institute’s Center for Stem Cell Biology, where her laboratory is located and all her research is conducted. She is also an assistant professor in the Department of Cell and Developmental Biology and the Cellular and Molecular Biology Program.

Swathi Yadlapalli of the Life Sciences Institute and U-M Medical School was also an author on the paper. Support for the research was provided by the National Institutes of Health, American Heart Association and MacArthur Foundation.