Driving a gas-guzzler? You can still cut fuel costs by nearly half 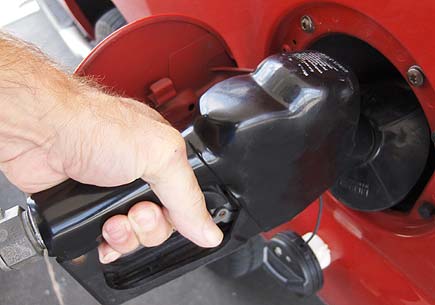 Image courtesy of Morguefile.com user runronANN ARBOR—While driving a fuel-efficient vehicle is the best way to save gas, motorists can still cut fuel consumption nearly in half by driving slower and less aggressively, properly maintaining their vehicles and avoiding congested roads, say University of Michigan researchers.

“Driving a light-duty vehicle in the United States is currently more energy-intensive than using a bus or a train and even flying,” said Michael Sivak, research professor at the U-M Transportation Research Institute. “How can we improve on this performance? Vehicle selection has by far the most dominant effect?the best vehicle currently available for sale in the United States is nine times more fuel-efficient than the worst vehicle.

“Nevertheless, remaining factors that a driver has control over can contribute, in total, to about a 45 percent reduction in the on-road fuel economy per driver?a magnitude well worth emphasizing.”

The UMTRI researchers say that choosing to drive a car (23.7 average mpg for model year 2011) rather than a minivan (19.4 mpg), SUV (19.2 mpg) or pickup truck (17.2 mpg) may be the easiest way to save gas. However, regardless of vehicle type, drivers who keep their engines tuned, tires properly inflated and use the right kind of engine oil can improve fuel economy by as much as 40 percent.

Further, by choosing to drive on routes that include highways, flat terrain and less congestion, motorists can save gas. For example, a flat route can yield 15-20 percent better fuel economy than a hilly route and taking a free-flowing highway route as opposed to a highly congested route can improve fuel economy for that trip by 20-40 percent, the researchers say. In addition, carrying extra cargo (e.g., an additional 100 pounds), can reduce fuel economy by up to 2 percent.

Finally, Sivak and Schoettle say that driver behavior can go a long way in improving fuel economy. Driving slower and less aggressively can save motorists up to 30 percent in gas usage, while turning off the air conditioner can save up to 25 percent and using cruise control can save 7 percent while at highway speeds. In addition, letting a vehicle idle for more than a minute can significantly reduce fuel economy.

The actual fuel savings that good eco-driving practices will yield, however, are dependent on specific and sustained conditions. Consequently, according to Sivak and Schoettle, the actual total savings will be less than the sum of the listed maximum savings for each individual eco-driving practice.

“This can be interpreted as the cup being half full or half empty,” Sivak said. “On one hand, one can conclude that decisions concerning vehicle-selection are dominant for on-road fuel economy. On the other hand, one can also conclude that not following the remaining good eco-driving practices can still lead to a major reduction in on-road fuel economy.”

The researchers say their analysis focused on fuel economy per vehicle, not per occupant. However, the average occupancy of a light-duty vehicle has dropped from 2.0 in 1960 to 1.4 today.

“This represents a 30-percent drop in vehicle fuel economy per occupant,” Sivak said. “Consequently, increased carpooling, to at least the level of the 1960s, would go a long way to improve energy intensity of driving per occupant.”