Due to climate change, one-third of animal parasites may be extinct by 2070 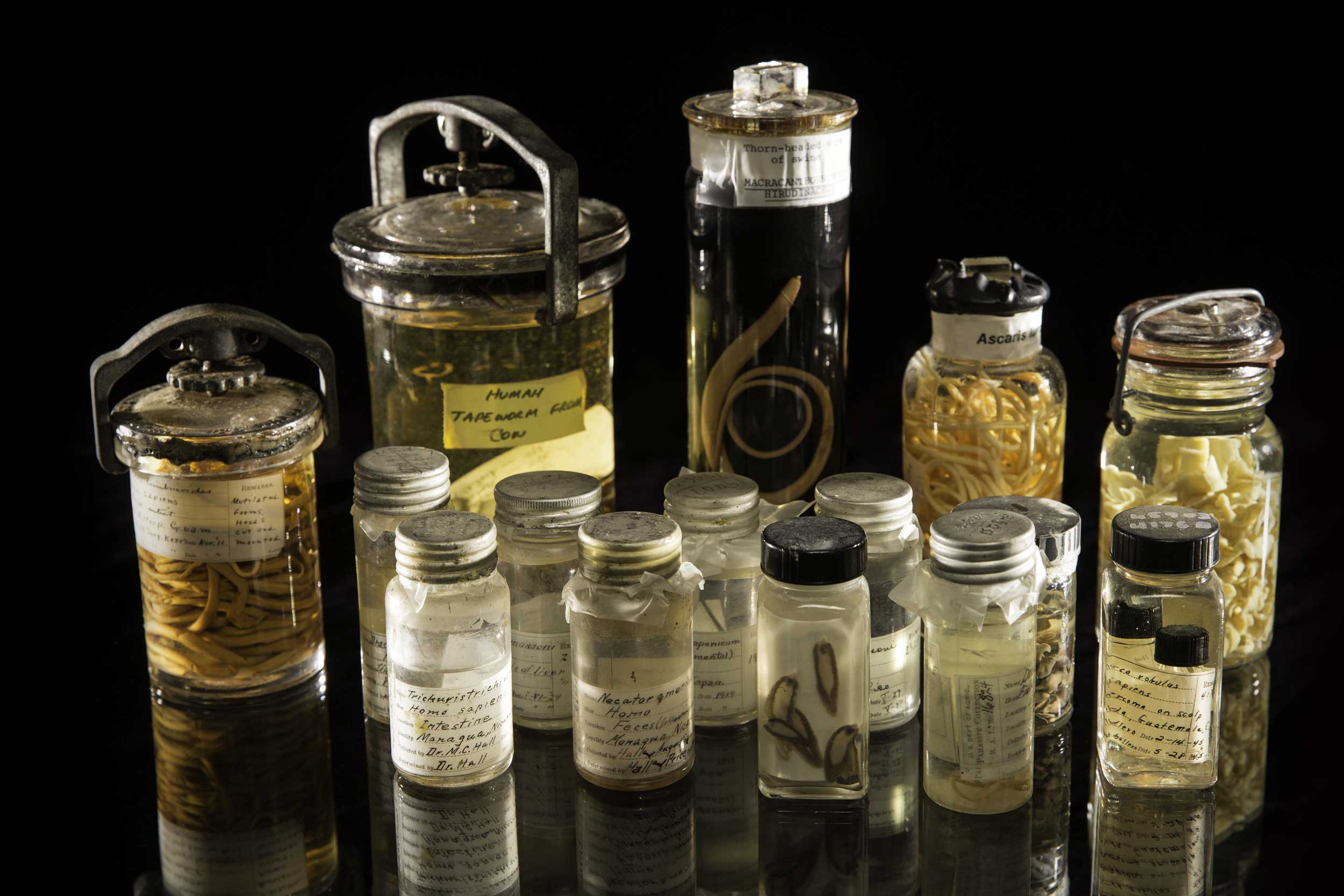 An assortment of specimens from the Smithsonian’s National Parasite Collection at the National Museum of Natural History. The National Parasite Collection holds more than 20 million parasite specimens in connection with information about their geographic distribution and host animals. Image credit: Paul Fetters for the Smithsonian InstitutionANN ARBOR—The Earth’s changing climate could cause the extinction of up to a third of its parasite species by 2070, according to a global analysis reported Sept. 6 in the journal Science Advances.

Parasite loss could dramatically disrupt ecosystems, and the new study suggests that they are one of the most threatened groups of life on Earth.

University of Michigan wildlife ecologist Nyeema Harris is one of the paper’s 17 authors.

Parasites have an admittedly bad reputation. The diverse group of organisms includes tapeworms, roundworms, ticks, lice, fleas and other pests—most of which are best known for causing disease in humans, livestock and other animals. But parasites play important roles in ecosystems. They help control wildlife populations and keep energy flowing through food chains.

Because many parasites have complex life cycles that involve passing through different host species, parasite diversity can be considered a sign of a healthy ecosystem, said Anna Phillips, a research zoologist and curator of the U.S. National Parasite Collection at the Smithsonian Institution’s National Museum of Natural History.

“Having parasites is a good indicator that the ecosystem has been stable,” she said. “It means the system has a diversity of animals in it and that conditions have been consistent long enough for these complex associations to develop.”

Despite their critical contributions to ecosystems, parasites have drawn less attention from conservation biologists than more charismatic creatures. Until now, they have largely been left out of studies of climate change and its impacts, said study lead author Colin Carlson, a graduate student in Wayne Getz’s laboratory at the University of California, Berkeley.

To find out how climate change is likely to affect the survival of a wide range of parasite species, Carlson and colleagues turned to museum collections. The U.S. National Parasite Collection, an expansive set of worms, fleas, lice and other parasites, provides a broad and deep record of different species’ occurrences around the world. The still-growing collection began in 1892 and now contains millions of organisms. Most species are represented by many specimens, meaning researchers can use the museum’s records to investigate organisms’ geographical distributions and predict changes over time. 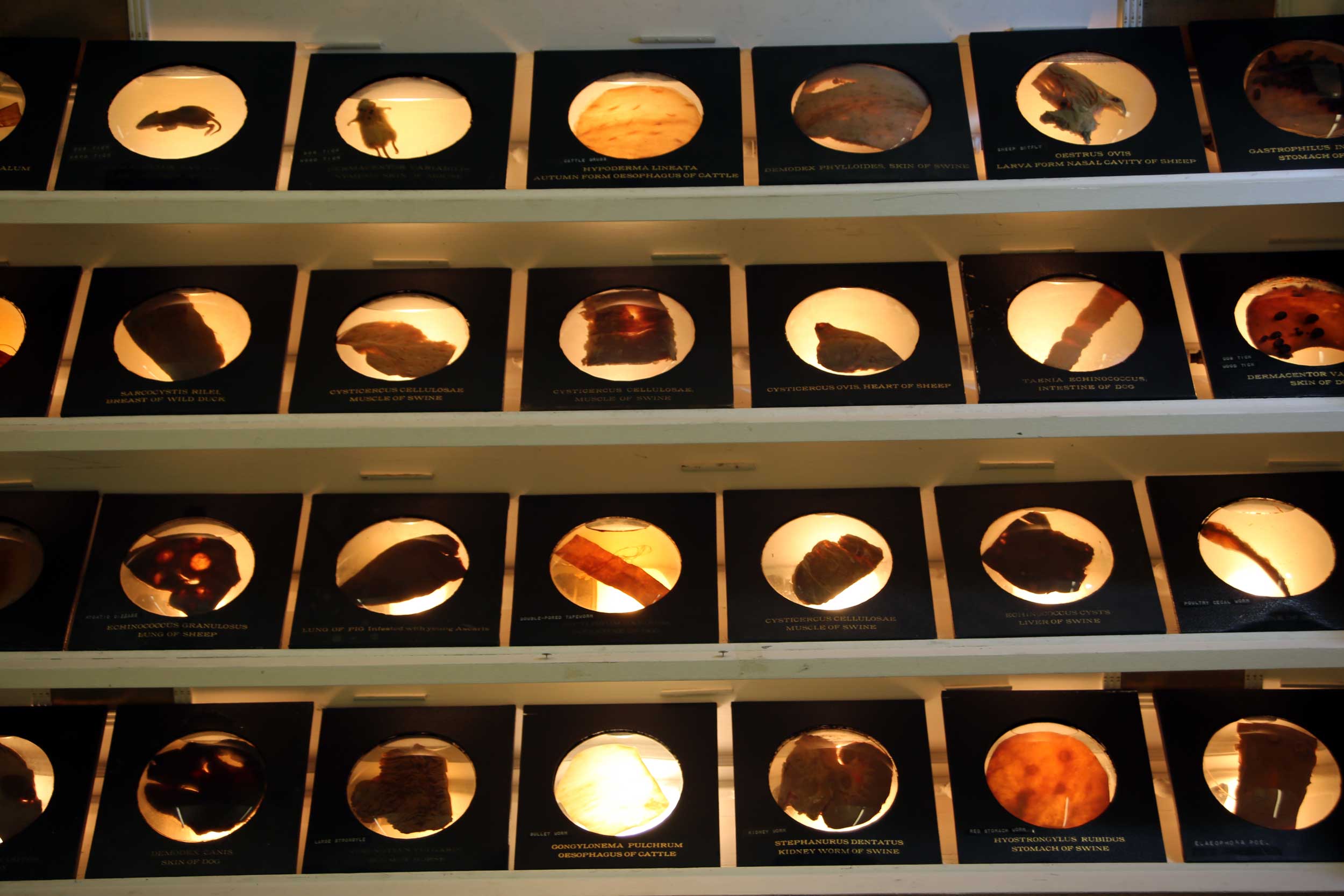 An assortment of specimens from the Smithsonian’s National Parasite Collection at the National Museum of Natural History. Image credit: Adrian Van AllenBefore they could begin their analysis, the researchers needed to know exactly where each specimen came from so they could understand each species’ habitat needs. In recent years it has become standard to pinpoint a specimen’s original location with GPS coordinates in collection records, but the locations associated with older specimens tend to be less precise.

So the team, which included 17 researchers in eight countries, spent years tracking down the exact geographical source of tens of thousands of parasite specimens, adding GPS coordinates to their database wherever possible. That information was essential for the current study and will also aid in future research.

U-M’s Harris scoured multiple parasite databases for geographic information, including records from the university’s Museum of Zoology curated by Professor Barry OConnor, whose research focuses on the evolution and ecology of parasitic and commensal mites and their hosts.

Harris also wrote and edited sections of the Science Advances paper, and a flea image used in the paper came from a specimen she collected from a black-footed ferret, one of the most endangered carnivores in North America.

“Climate change has the capacity to alter nearly every dimension of biodiversity,” said Harris, an assistant professor in the Department of Ecology and Evolutionary Biology. “Yet, despite being among the most diverse groups of organisms on Earth, parasites have previously been omitted from vulnerability assessments.

“Given our concerns about parasites devastating animal populations and the transmission risks to humans, it’s been surprising to discover their patterns of diversity and to understand their sensitivities to such a major environmental concern.” 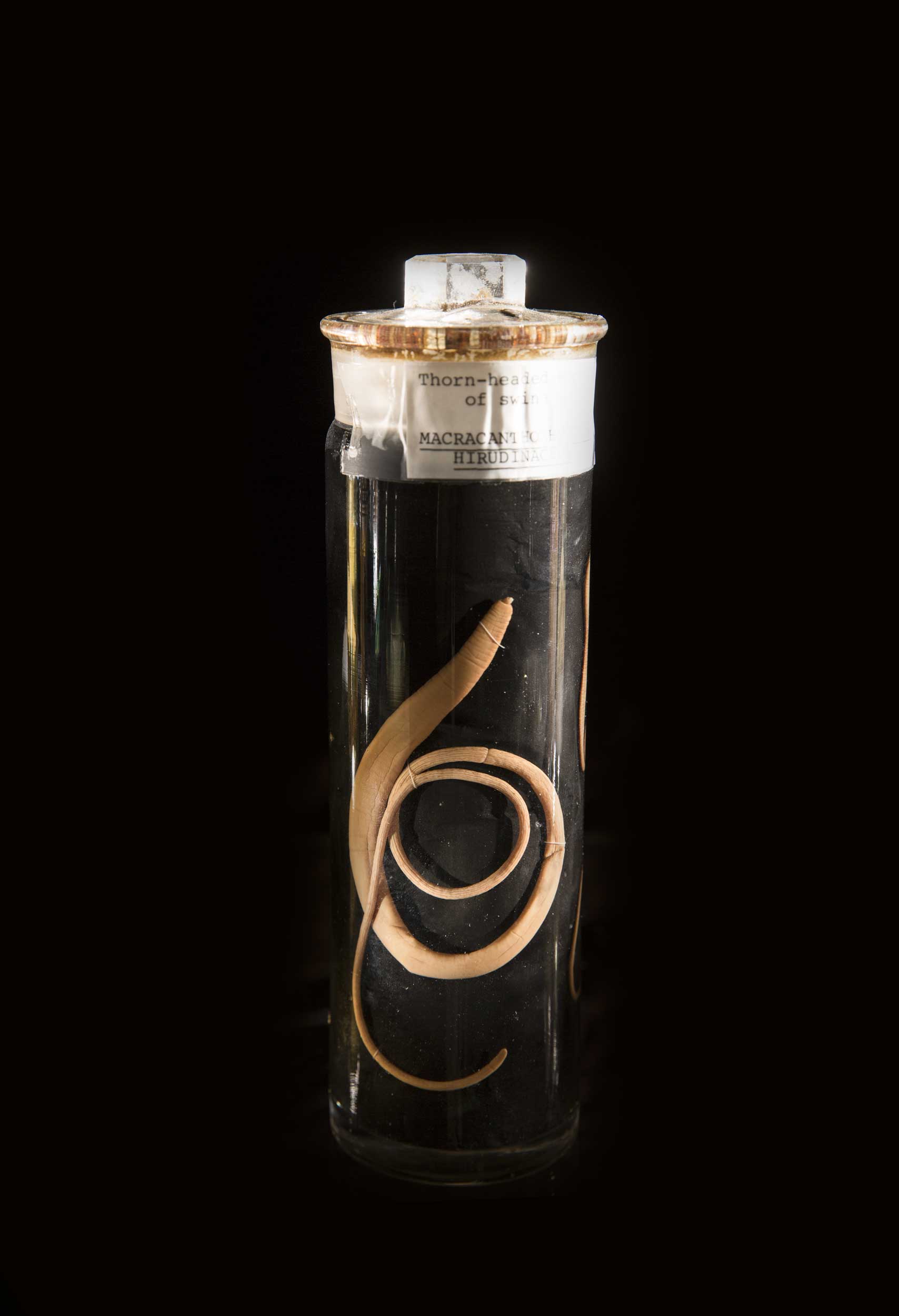 A parasite specimen from the Smithsonian’s National Parasite Collection at the National Museum of Natural History. The species, Macracanthorhynchus hirudinaceus, is an acanthocephalan parasite and is usually found in pigs. Parasites often have complex life cycles that involve several species of animals as intermediate hosts, and this particular parasite species spends part of its larval stage in beetles. Image credit: Paul Fetters for the Smithsonian InstitutionOnce the geospatial information was complete, the data could be used to make predictions about how parasites will fare as the Earth’s climate changes. Using climate forecasts, the researchers compared how 457 parasite species will be impacted by changes in climate under various scenarios.

The analysis determined that parasites are even more threatened than the animal hosts they rely on. The most catastrophic model predicted that more than a third of parasite species worldwide could be lost by 2070. The most optimistic models predicted a loss of about 10 percent.

Parasites need to be included in conversations about conservation, and this study highlights their delicate position in complex ecosystems, the scientists said.

“Parasites are definitely going to face major extinction risk in the next 50 years,” Carlson said. “They are certainly as threatened as any other animal group.”

To share what they’ve learned, the team created an online parasite “Red List” that identifies the extinction threat level of each species in the study. While much of conservation biology focuses on single species, it is important to keep in mind the goal of conserving ecosystems as a whole.

“As long as there are free-living organisms, there will be parasites,” Phillips said. “But, the picture of parasite biodiversity in 2070 or beyond has the potential to look very different than it does today based on the results of these models.”

Funding for this study was provided by the University of California, Berkeley, and the Natural Sciences and Engineering Research Council of Canada.