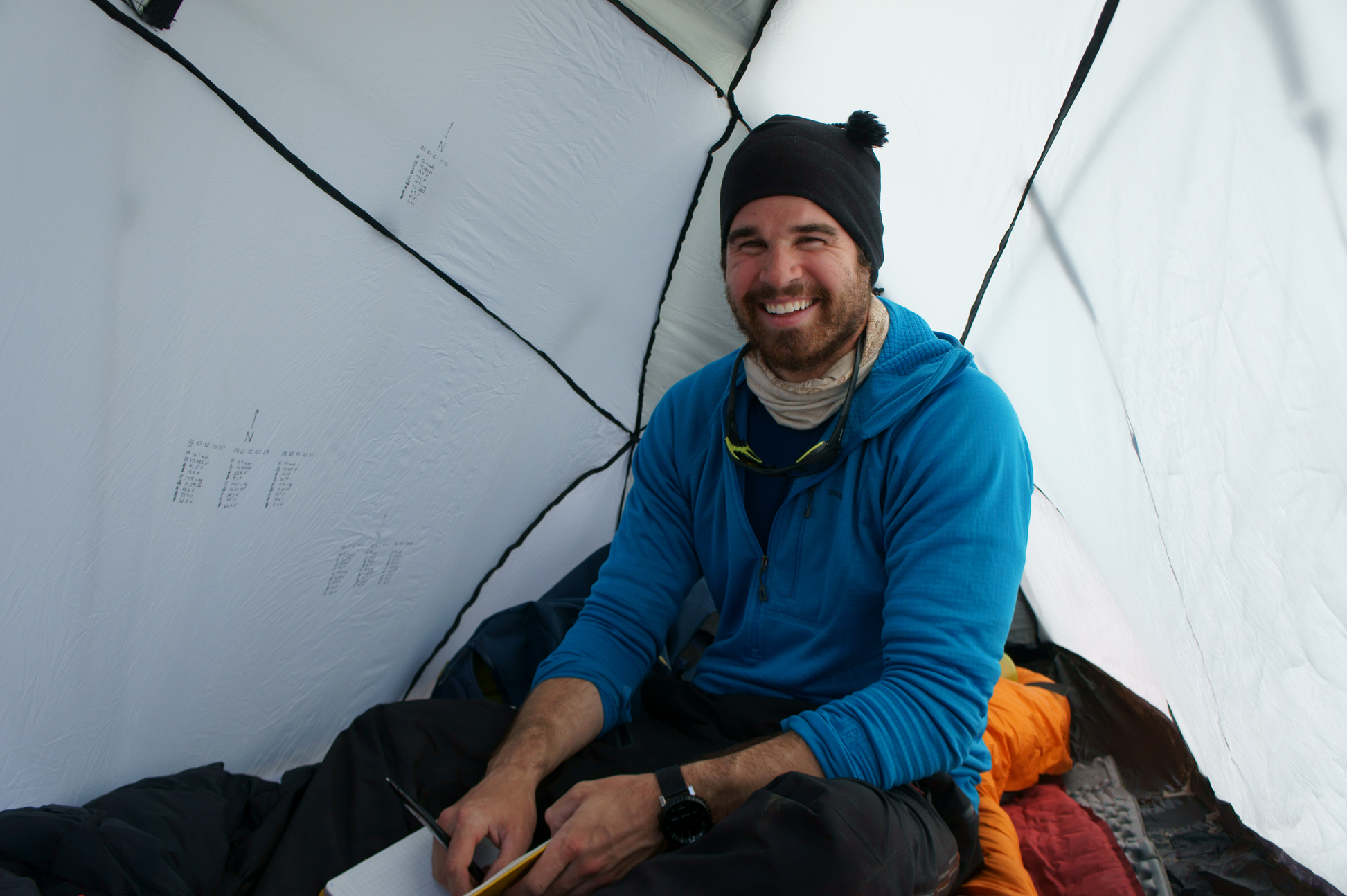 The graduate student in architecture at the University of Michigan had just pitched the tent that he made himself in a valley when a 40-foot-tall dust tornado kicked up a rock and sent it flying into the side of the dwelling, puncturing a fist-sized hole in a side panel.

It was an ominous start for McCarthy, whose biggest initial worry was whether the tent would hold together when it was getting blasted by the icy howling winds on the mountain, which people die climbing every year. But there he was dealing with a crisis long before the toughest part of the expedition began in western Argentina.

“It was definitely a wake-up call for me,” the master’s student said. “I thought to myself, ‘Wow, if this could happen so low on the mountain, what will happen high on the mountain in the high winds?'”

He was able to patch the hole with fabric tape from his emergency sewing kit. His guide, world-renowned mountaineer Vern Tejas, also gave him some tips about how to make the tent stronger, sewing more anchor points on the front and back.

Building the tent was part of McCarthy’s thesis project at the Taubman College of Architecture and Urban Planning. The Grand Rapids, Mich., native has long been interested in nomadic dwellings and architecture for extreme environments.

Few architecture students get to live in the structures they designed. Even fewer have to rely on their designs for their survival. The apprentices of legendary architect Frank Lloyd Wright had to build their own dwellings in the Arizona desert.

Although tents look like simple structures, they’re extremely hard to make. Getting the geometry and fabric tension right is difficult.

It was especially challenging for McCarthy, who didn’t know how to sew and only had five weeks to learn the craft before flying to South America to start the expedition with nine other climbers. Just hours before his flight, he was still putting the finishing touches on the tent.

The expedition began Feb. 15, and the group had to climb to four camps on the mountain before making a final push to the summit.

McCarthy said he felt physically prepared for the climb because he trained for it by cycling, running uphill on a treadmill and grinding away on grueling Stairmaster sessions wearing his boots and 60-pound pack.

But the mental side of the climb was the toughest: enduring the mountain’s harsh conditions every day with wind chills at 20 below zero, trying to purify water with nasty particles floating in it, choking down protein bars, Oreo cookies and crackers while feeling nauseous due to the high altitude.

The closest he came to cracking mentally was at the second camp at 17,500 feet when high winds hammered his tent.

“I stayed up all night with my headlamp on, holding the cross members of the tent,” McCarthy said. “I was afraid the tent would blow away. Even my guide was concerned and came over in the middle of the night to check on me.”

At first light, he was exhausted and still had 15 more days of climbing. Three members of his group got sick and had to be evacuated by helicopter at the second camp.

The group planned to summit Aconcagua, which means “Stone Sentinel,” on one of the last three days of February. But high winds delayed the climbers, and they finally reached the top on March 3.

Now back in Ann Arbor, McCarthy set up the tent again in the Taubman College. Some of the seams on the rip-stop nylon are stressed but the tent seems to have held up well on the windy mountain, which McCarthy’s guide said was a “tent graveyard.”

McCarthy has no plans to retire the tent. For the remainder of his thesis, he will continue to work on the design, using things he learned while living in it.

“I’m emotionally attached to it,” he said. “I’m sure there will be many more expeditions in this thing.”

More information and photos about the tent and expedition are available at McCarthy’s blog: http://abletoinhabit.com