ANN ARBOR—Earl Lewis, noted social historian, author and academic leader, will join the University of Michigan faculty at the completion of his term as president of the Andrew W. Mellon Foundation in March. 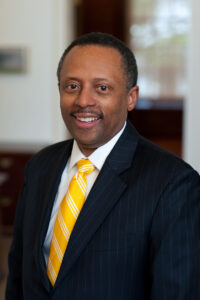 Lewis will serve as director of the U-M Center for Social Solutions, a new center that will address three core areas of social concern: diversity and race, water, and the future of work. Lewis will continue the “Our Compelling Interests” book series that he launched at the Mellon Foundation, which investigates how diversity and social connectedness are imperative to our shared success and prosperity, as an important part of the new center’s work. In addition, Lewis will serve as professor of history and Afroamerican and African studies.

“I am pleased to welcome pre-eminent scholar Earl Lewis back to the University of Michigan,” said U-M President Mark Schlissel. “I commend his outstanding contributions to human understanding and his leadership in advancing the Mellon Foundation’s important mission. I look forward to having Earl here as a faculty colleague and experienced leader.”

This appointment represents Lewis’ return to U-M, where he served on the faculty and in the administration for more than 15 years (1989 to 2004), including as vice provost and dean of the Horace H. Rackham School of Graduate Studies. In his previous work at the university, Lewis held the Elsa Barkley Brown and Robin D.G. Kelley Collegiate Professorship and, among many recognitions, received the Faculty Recognition Award and Harold R. Johnson Diversity Service Award.

“When I left Michigan in 2004, I always entertained the thought of one day returning. I am thrilled to now do so,” Lewis said. “My most immediate project will be the development of the Center for Social Solutions, a first-of-its-kind platform that will focus on the critical issues of today.”

“Public intellectuals raise essential questions, lead the exploration of them, and contribute to finding effective answers to them,” said Martin Philbert, U-M provost and executive vice president for academic affairs. “Earl Lewis is an exemplar of this tradition. As a scholar and a leader in higher education and philanthropy, he has examined and addressed critical questions for our society including diversity, equity and inclusion, graduate education, humanities scholarship, and connections to larger communities. We are delighted to welcome him back to Michigan and look forward to working with him on these important concerns.”

Andrew Martin, dean of the College of Literature, Science, and the Arts, added, “Earl Lewis is an outstanding historian and educator, and we are fortunate that he is returning to the University of Michigan. Not only will he be a strong leader for the Center for Social Solutions, but he will provide wisdom and experience as a faculty member in LSA’s departments of History and Afroamerican and African Studies.”

Lewis was appointed the sixth president of the Mellon Foundation in March 2013. During his time at Mellon, the foundation made grants totaling more than $1.2 billion as he spearheaded the implementation of the first strategic plan, reshaped key program areas, and expanded the number and types of grantees supported. Lewis implemented a range of important initiatives, including the Mellon Research Forum and the “Our Compelling Interests” book series and initiative. Two volumes have already appeared—”Our Compelling Interests” (Lewis and Nancy Cantor) and “The Diversity Bonus” (Scott Page)—and others are in the pipeline.

“The Mellon Foundation is grateful for Earl’s dedicated service to the mission of the foundation and for his determination in advancing the causes of the arts, humanities, higher education and diversity,” said Danielle Allen, chair of the Mellon Foundation Board. “Widely respected, Earl has been an important leader for issues the Foundation cares about, and we wish him well on his return to the academy.”

Prior to joining the Mellon Foundation, Lewis served as provost and executive vice president for academic affairs and the Asa Griggs Candler Professor of History and African American Studies at Emory University (2004-2012). As provost, Lewis led academic affairs and academic priority setting for the university. Lewis also held an earlier faculty appointment at the University of California at Berkeley.

Over the past quarter-century, Lewis has established himself as a leading scholar in the field of African American studies. Since the publication of his monograph, “In Their Own Interests: Race, Class and Power in Twentieth Century Norfolk” (1991), he has co-authored or co-edited seven books dealing with the contemporary history and social status of African Americans. These include the widely acclaimed “Love on Trial: An American Scandal in Black and White” (with Heidi Ardizzone, 2001) and the historically vital “Defending Diversity: Affirmative Action at the University of Michigan” (with Patricia Gurin and Jeffrey Lehman, 2004).

Lewis is the co-general editor, along with Professor Robin Kelley of UCLA, of the 11-volume “Young Oxford History of African Americans” (1994-97), and with Kelley and others of the prize-winning book “To Make Our World Anew” (2000).

A much sought-after speaker, he is also the author of more than three dozen scholarly articles and essays that range across multiple horizons, including race, ethnicity, social class, urban studies and higher education.

Lewis occupies many roles as a nationally recognized leader in higher education. A member of the American Academy of Arts and Sciences, he has served, for example, on the Academy’s Lincoln Project; on the American Historical Association’s Futures Committee; and on the Association of American Universities’ Task Force on improving Graduate Education and Early Research Careers.

He has also served on numerous boards of directors, including the boards of Emeriti Retirement Health Solutions, the Council of Graduate Schools, the Graduate Record Exam, and the American Council of Learned Societies, as well as the National Academy of Sciences Board on Higher Education and the Workforce. Current board service includes the Educational Testing Service, Concordia College, 2U, the American Funds, and the Foundation Center. Lewis was an Obama administration appointee to the National Advisory Committee on Institutional Quality and Integrity. He is president-elect of the Organization of American Historians.