Egyptians want democracy, but not U.S. efforts to promote it 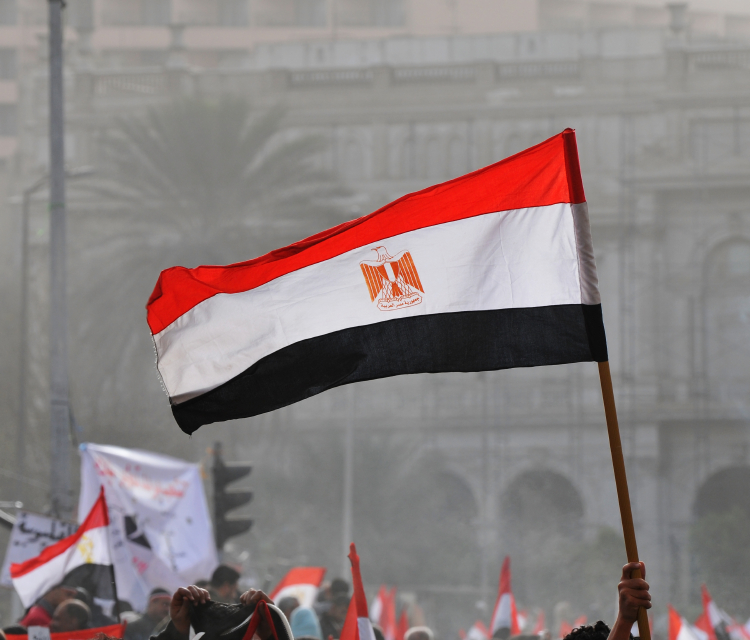 At a demonstration in Cairo’s Tahrir Square, an Egyptian flag is raised above the crowd.ANN ARBOR—The Egyptian trial of employees of four American groups that were promoting democracy was abruptly postponed earlier this week. But the crisis in U.S.-Egyptian relations continues, for reasons, according to a University of Michigan researcher, that have a lot to do both with domestic Egyptian politics and with American Middle East policy.

“Many Americans believed that Egyptians would welcome American democracy promotion efforts since there has been broad public support in Egypt for both democracy in general and the ouster of the anti-democratic regime of Hosni Mubarak in particular,” said U-M political scientist Mark Tessler, who co-directs the Arab Barometer Study, which surveys public attitudes in 11 Arab nations.

“But in fact, the survey we conducted in Egypt just this summer showed that a solid majority of the Egyptian public distrusts American foreign policy and this includes American democracy promotion activities in their country.”

The Arab Barometer Study is coordinated by an international team composed primarily of Arab scholars, and involves face-to-face interviews with representative, probability-based national samples. In the most recent Egyptian survey, researchers interviewed 1,220 men and women.

Among the questions: Did respondents think “the influence of the United States on the development of democracy in their country” was positive or negative. Twenty-seven percent said they thought it was very negative while only 8 percent considered it very positive. Additionally, 25 percent thought U.S. influence on the development of democracy was somewhat negative, 28 percent said somewhat positive, and the rest said neither positive nor negative.

“While the overall distribution of judgments about American democracy promotion is somewhat mixed, it is clearly skewed in a negative direction,” said Tessler, who is the Samuel J. Eldersveld Collegiate Professor of Political Science and U-M Vice Provost for International Affairs.

Egyptian respondents were also asked about their views about the kind of political system they would prefer to see emerge in Egypt. Given a choice between a “civil system” and a “religious system,” 73 percent chose a civil system and 27 percent chose a religious system. According to Tessler, this finding is consistent with results of other opinion polls, and suggests that Islamic party victories in the recent Egyptian election were not so much an endorsement of an Islamist platform as a reflection of the superior mobilization capacity and campaigns of Islamic parties and the fact that their candidates were more likely to be locally known and trusted.

So far as views of U.S. democracy promotion efforts are concerned, Egyptians with differing views about the kind of political system they want do not have differing views about the influence of the United States on the development of democracy in Egypt. Both are heavily skewed, and in almost equal proportions, toward a judgment that the impact of U.S. actions is negative or very negative.

In January, the Egyptian government filed criminal charges against employees of the National Democratic Institute (NDI), the International Republican Institute (IRI), Freedom House and the International Center for Journalists, including sixteen U.S. citizens. Among the accused are Sam LaHood, head of Egypt operations for IRI and son of U.S. Secretary of Transportation Ray LaHood.

“None of this means that the work of NDI, IRI and the others should be faulted, or that these groups should discontinue their democracy-promotion efforts in places where it is permitted,” Tessler said. “But the Arab Barometer findings do suggest that these groups and their activities are viewed by many and probably most as serving the interests of the United States and not the interests of Egypt.

“However laudable their objectives—and in Egypt at least, however congruent with the goals of the vast majority of ordinary men and women—these groups will be viewed the way U.S. foreign policy is viewed, and in Egypt that view is not favorable.”