ANN ARBOR—Researchers used electricity on certain regions in the brain of a patient with chronic, severe facial pain to release an opiate-like substance that’s considered one of the body’s most powerful painkillers.

The findings expand on previous work done at the University of Michigan, Harvard University and the City University of New York where researchers delivered electricity through sensors on the skulls of chronic migraine patients, and found a decrease in the intensity and pain of their headache attacks. However, the researchers then couldn’t completely explain how or why.

The current findings help explain what happens in the brain that decreases pain during the brief sessions of electricity, says Alexandre DaSilva, the senior researcher in the study from the University of Michigan School of Dentistry. Other study authors include DaSilva’s PhD student, Marcos DosSantos, and also Dr. Jon-Kar Zubieta from the Molecular and Behavioral Neuroscience Institute. 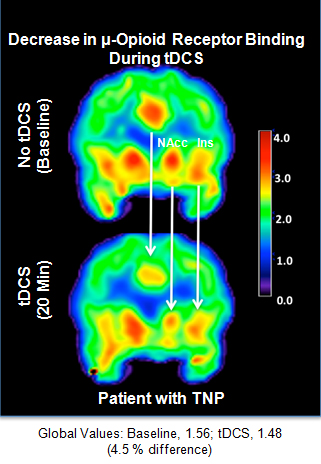 The figure above shows the brain of a chronic pain patient before and during electrical stimulation to induce pain relief. The areas in red represent the relative number of free mu-opioid receptors, the main target of pharmaceutical opiates. They found a decrease in availability of those receptors during electrical stimulation. The results indicate for the first time the active release of local mu-opioid, a powerful substance in the brain that, when binds to the receptor, changes pain perception. In their current study, DaSilva and colleagues intravenously administered a radiotracer that reached important brain areas in a patient with trigeminal neuropathic pain (TNP), a type of chronic, severe facial pain. They applied the electrodes and electrically stimulated the skull right above the motor cortex of the patient for 20 minutes during a PET scan (positron emission tomography). The stimulation is called transcranial direct current stimulation (tDCS).

The radiotracer was specifically designed to measure, indirectly, the local brain release of mu-opioid, a natural substance that alters pain perception. In order for opiate to function, it needs to bind to the mu-opioid receptor (the study assessed levels of this receptor).

“This is arguably the main resource in the brain to reduce pain,” DaSilva said. “We’re stimulating the release of our (body’s) own resources to provide analgesia. Instead of giving more pharmaceutical opiates, we are directly targeting and activating the same areas in the brain on which they work. (Therefore), we can increase the power of this pain-killing effect and even decrease the use of opiates in general, and consequently avoid their side effects, including addiction.”

The dose of electricity is very small, he says. Consider that electroconvulsive therapy (ECT), which is used to treat depression and other psychiatric conditions, uses amperage in the brain ranging from 200 to 1600 milliamperes (mA). The tDCS protocol used in DaSilva’s study delivered 2 mA, considerably lower than ECT.

Just one session immediately improved the patient’s threshold for cold pain by 36 percent, but not the patient’s clinical, TNP/facial pain. This suggests that repetitive electrical stimulation over several sessions are required to have a lasting effect on clinical pain as shown in their previous migraine study, DaSilva says.

The manuscript appears in the journal Frontiers in Psychiatry. The group just completed another study with more subjects, and the initial results seem to confirm the findings above, but further analysis is necessary.

Next, researchers will investigate long-term effects of electric stimulation on the brain and find specific targets in the brain that may be more effective depending on the pain condition and patients’ status. For example, the frontal areas may be more helpful for chronic pain patients with depression symptoms.