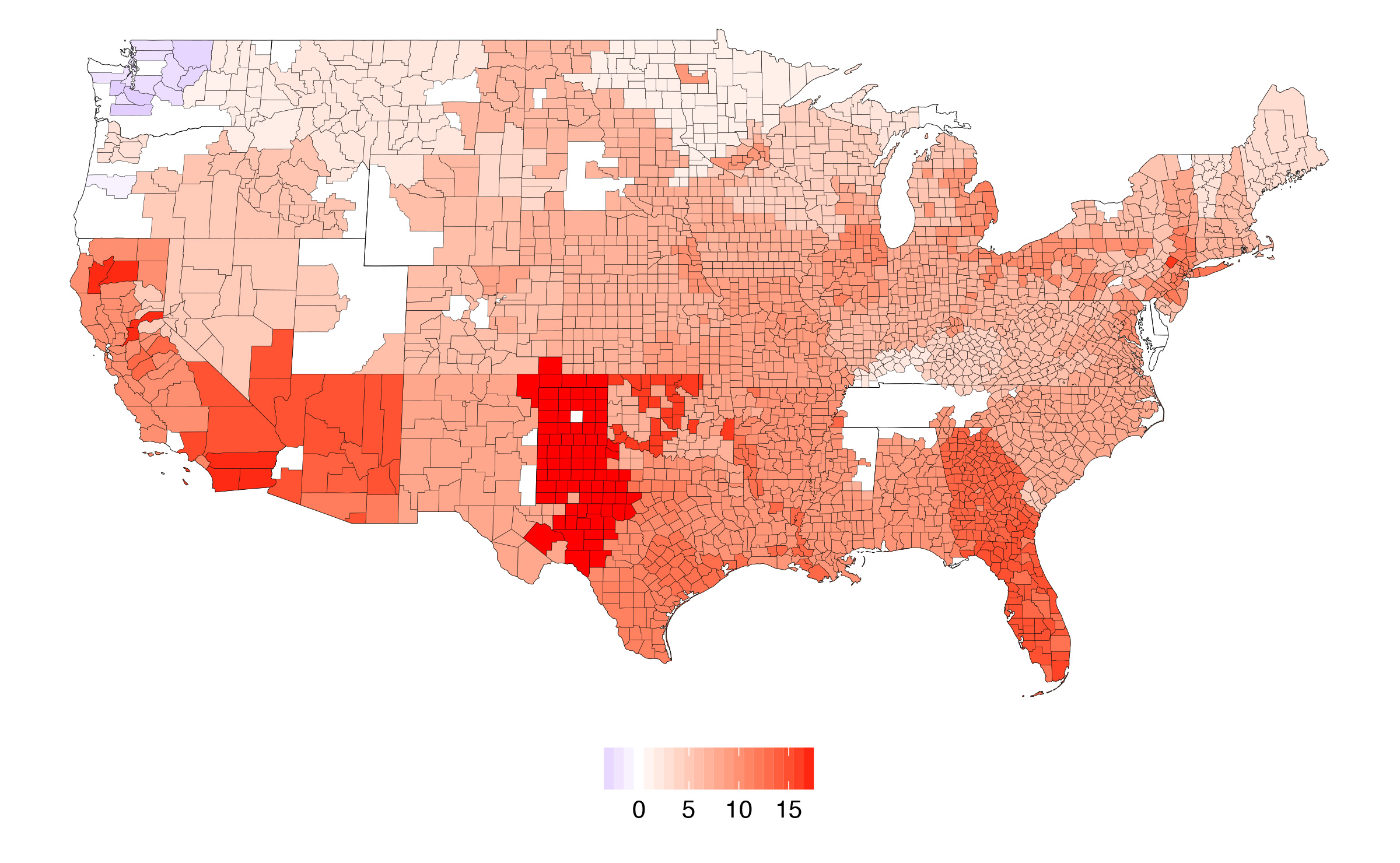 The percentage change in the intensity of peak electricity load under a “business as usual” carbon emissions scenario. The largest peak demand increases appear in the south and west. Image credit: Auffhammer in PNAS, 2017, DOI number 10.1073/pnas.1613193114

ANN ARBOR—Climate change is likely to increase U.S. electricity costs over the next century by billions of dollars more than economists previously forecast, according to a new study involving a University of Michigan researcher.

The study shows how higher temperatures will raise not just the average annual electricity demand, but more importantly, the peak demand. And to avoid brownouts and absorb these surges, utilities will need to spend between $70 billion and $180 billion in grid upgrades—power plants and futuristic energy storage systems for which ratepayers would ultimately foot the bill.

“If you look at your own bill across the year, you’ll probably see that your usage is highest in the summer, when you’re running the air conditioning,” said Catherine Hausman, assistant professor at U-M’s Gerald R. Ford School of Public Policy. 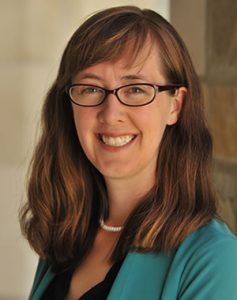 “Climate change researchers know that when we look out over the next 100 years, things will get warmer and, on a per-person basis, use of air conditioning will rise. The question we asked was ‘On the hottest day of the year, when people are maxing out on that, can the grid handle it?’ We build the grid for the hottest hour of the year.”

Hausman and colleagues urge electric grid planners to keep their calculations in mind as they draft 20-year procurement plans. They also have a message for policymakers.

“This means that climate change adaptation is going to be more expensive than we thought. And so mitigation efforts become more valuable—more worthwhile—because they can prevent these costs,” said Hausman, who is co-author of the study that appears in the Proceedings of the National Academy of Sciences. “Our findings should inform the cost-benefit calculations of climate change policy.”

The need varies by region. The researchers examined separately each of 166 load-balancing authorities. These are regions that regulators use when they’re examining the grid’s reliability.

To generate their cost figures, the researchers calculated the mathematical relationship between air temperature and electricity in each region. Then they plugged that into simulations that took into account climate models and two different carbon emissions scenarios identified by the Intergovernmental Panel on Climate Change.

One scenario represents “business as usual,” under which carbon emissions would continue to increase. The other is a scenario under which we stabilize emissions. Under both scenarios, if the nation were to experience temperatures like the ones predicted 100 years from now with today’s infrastructure, the grid would be overtaxed.

Under the stabilization scenario, demand on an average day would climb 3 percent, and on a peak day, 7 percent. They calculate a 152 percent change in the number of days experiencing the 95th percentile or above of demand. Absorbing this would require an investment of $70 billion.

Under business-as-usual, demand on a peak usage day would spike by 18 percent, and the number of days in the 95th percentile or above would go up by 395 percent. Preparing for this would cost $180 billion.

What exactly would that money pay for? Electricity storage technologies such as grid-scale batteries could work, but they’re still in the research phase. Advances in batteries or the use of electric vehicles for storage could smooth the peaks.

The study also nods to “time varying pricing,” which gives customers incentives to reduce their use at peak times. Solar power and wind power could help a bit, but not enough without better energy storage options. The sun and wind aren’t always on at peak demand times. Given the current state of technology, if the projected climate of 2117 were to occur tomorrow, Hausman said we’d need to build more fossil fuel plants to jump in on the highest demand days.

The researchers caution that this isn’t a “prediction” for several reasons. Yes, increasing temperatures may spur greater adoption of air conditioners, and as a result, greater temperature impacts, but they could also hasten development of more efficient air conditioners.

“We’re not trying to say this is the future scenario,” Hausman said. “We’re saying, ‘If the future climate were here now, what would need to happen to the grid to adapt to that warmer world?'”

The study is titled “Climate change is projected to have severe impacts on the frequency and intensity of peak electricity demand in the United States.” In addition to U-M, the study involved researchers from the University of California, Berkeley; Stanford University and the University of British Columbia.