Electricity from shale gas vs. coal: Lifetime toxic releases from coal much higher 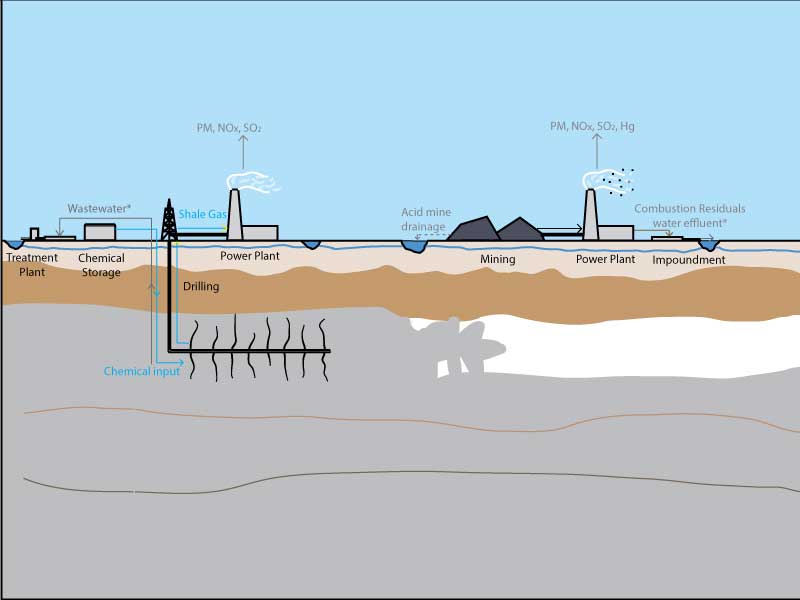 ANN ARBOR—Despite widespread concern about potential human health impacts from hydraulic fracturing, the lifetime toxic chemical releases associated with coal-generated electricity are 10 to 100 times greater than those from electricity generated with natural gas obtained via fracking, according to a new University of Michigan study.

The study is a comparative analysis of the harmful health effects of electricity produced from shale gas and coal. It looks at the amount of toxic chemicals released into the air, soil and water during both the resource extraction and electricity generation phases of both technologies and concludes that the potential human health impacts of electricity from coal are much higher.

The findings suggest that as the U.S. energy market continues to shift from coal to natural gas, the overall “toxicity burden” of the electricity sector will decrease, said study corresponding author Shelie Miller, an environmental engineer and an associate professor at the U-M School for Environment and Sustainability’s Center for Sustainable Systems.

“This analysis does not imply that concerns associated with shale gas production are unfounded, only that the overall toxic load of coal is definitely greater,” Miller said. “And while the study doesn’t address this directly, we should be pursuing renewables more aggressively if we really want to decrease the human toxicity burden of our energy system.”

The study was published online Oct. 10 in the journal Environmental Science & Technology. The other authors are Brian Ellis of the U-M Department of Civil and Environmental Engineering and Lu Chen, a recent graduate of the U-M School for Environment and Sustainability.

In recent years, the combination of horizontal drilling and hydraulic fracturing (commonly known as fracking), have helped unlock vast stores of natural gas in shale formations. Increased shale-gas production created a boom in some parts of the country but has also led to concerns over potential contamination of drinking water and possible human health impacts related to hydraulic fracturing.

Given those concerns and the ongoing shift to shale gas, Miller and her colleagues felt it was important to place into proper context the potential human health impacts of shale gas relative to coal. In their comparative study, called a lifecycle impact assessment, the researchers used Pennsylvania as the point of origin for both shale gas and coal, since both energy sources are abundant in the state.

In both systems, particulate matter released into the air from power plants during electricity generation was the dominant toxicity contributor and outweighed chemical releases that may occur during extraction. And the harmful air emissions from coal-fired power plants were much worse than those from cleaner-burning natural gas plants, Miller said.

“We looked at the total mass of emissions released per unit of electricity generated throughout the lifetime of both systems, and the overall toxic load is much greater for coal,” she said. “Emissions of particulate matter pumped into the air every single day by coal-fired power plants have greater potential human health impacts than any of the other chemicals we examined.”

The study by Miller and her colleagues is believed to be the first head-to-head comparison of coal and shale gas from the resource extraction phase through electricity generation. While the results provide a comparison of relative toxicity between the two systems, large uncertainties and lack of data precluded a full-blown risk assessment.

When faced with uncertainties about the chemicals used in the hydraulic fracturing process, the researchers deliberately overestimated the amount of toxic chemicals that would reach the environment to ensure they weren’t minimizing fracking’s health impacts, Miller said.

Even in a seemingly implausible accidental-release scenario in which all of a well’s hydraulic fracturing fluid and untreated wastewater were discharged directly into surface waters for the lifetime of the well, shale-gas electricity had a lower lifetime human toxicity impact, or HTI, than coal electricity, according to the study.

To calculate the health impacts of particulate matter from power plants, the researchers collected emissions data from 23 natural gas and 13 coal-fired power plants in Pennsylvania. Data from 2,900 hydraulically fractured wells in the state were used to estimate potential releases of fracturing fluid chemicals and wastewater.

Two different assessment methods were used to estimate health impacts. Various statistical tests were conducted to verify the results, suggesting 90 percent confidence in the overall finding that the HTI of shale gas is lower than the HTI of coal.

The work was supported by the University of Michigan Water Center, U-M’s M-Cubed program and a grant from the National Science Foundation.