Emojis: How we assign meaning to these ever-popular symbols 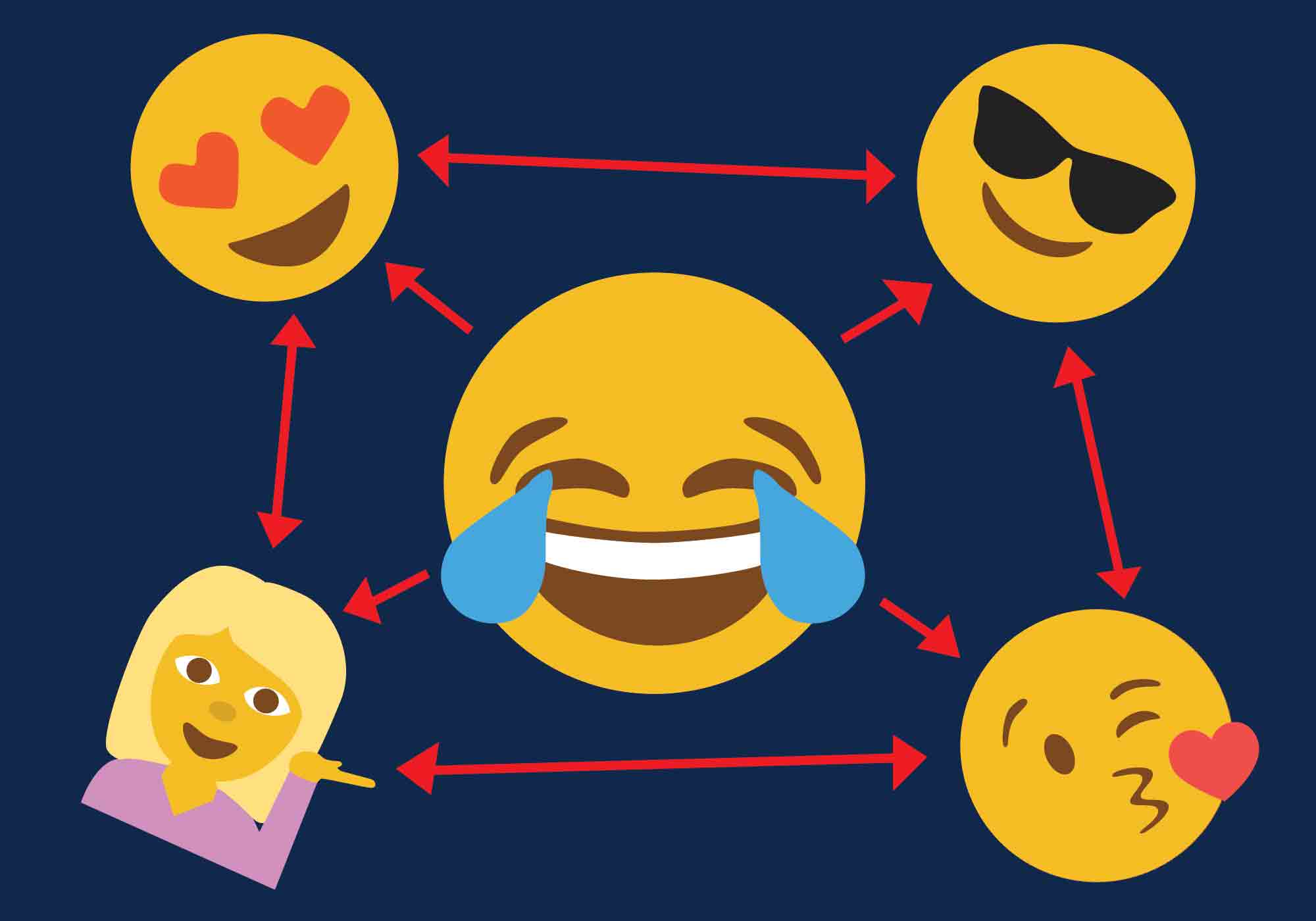 , when all three express happiness?

Why am I less likely to ask you to

the baby so that I can enjoy a

yet more likely to use

to express my appreciation when you do?

has come to mean “good morning” when the official emoji name of “sun behind cloud” sounds more like a report of the day’s weather?

These represent the types of questions researchers at the University of Michigan School of Information answered when they examined the use of emojis by one million users through more than 1.2 billion messages.

U-M doctoral student Wei Ai and colleagues analyzed the relationship of the symbols to words, to measure emoji semantics and to figure out what makes some symbols more popular than others. More than 9 percent of the messages the team analyzed contained at least one emoji.

“The popularity of emojis is linked to their semantic meanings,” said Ai, a graduate student research assistant with the Foreseer Group, a U-M research team that conducts cutting-edge research related to data mining, machine learning and information retrieval.

Emojis are those cute little symbols that help us express many thoughts or emotions graphically, with a simple keystroke. And while their use in everyday communication has become second nature to many across the world, most of us have very specific preferences for what we pick.

The Kika Emoji keyboard that was used to collect the data in 2015 contained nearly 1,300 emojis, the majority of which were seldom used. Users find several favorites—our go-to symbols—among the spectrum of emojis, many of which seem to say similar things.

“We found that the popularity of emojis are really affected by multiple factors related to the semantics. It is likely that although those emojis look similar, people don’t interpret them similarly. It may also be because some emojis are less ambiguous, or better substitutes for their word counterparts,” Ai said.

“There are likely other factors that are not related to the meaning, such as how they are located on the emoji keyboard or simply a rich-get-richer phenomenon.”

In other words, the popularity of a choice causes others to adopt that same choice.

The method the researchers used in their study allowed them to find semantic meaning by examining a symbol’s neighbors.

“A smart algorithm can analyze the big data of user messages that contain emojis and map the emojis and words into a space where those with similar semantic meanings are close,” Ai said. “In such a space, the meaning and sentiment of an emoji can be inferred from those of its closest neighbors.”

To illustrate this, the researchers created a 3-D visualization of the semantic space. An example of how symbols cluster according to the meaning assigned by users rather than by the artwork is illustrated by the broken heart. It is proximate to the tearful and sad faces rather than the other heart symbols that are similar in appearance.

While people increasingly use emojis to replace words in sentences, like the bottle above to represent feeding the baby, the majority of use is to express emotions, as in the thumbs up or blowing of a kiss in our example.

Collectively, we have assigned meaning to some of the symbols that don’t match the descriptions given by their creators, the researchers say.

“People do not use emojis as how they are described by the unicode standard. We know how people interpret the emojis based on how they actually use them in their messages, in the context of words,” Ai said.

“It’s said that a picture is worth a thousand words. Nonverbal symbols in online communication has shown their power ever since the first emoticon ‘:)’ is coined, and will be even more powerful as new forms (such as gif animations) become supported by modern apps and websites. These symbols, as a ubiquitous new language, also make it easier to communicate across language and cultural barriers.”

Ai will present the paper at the International Conference on Web and Social Media this week in Montréal. Other authors are Qiaozhu Mei, U-M School of Information; Xuan Lu, Xuanzhe Liu and Gang Huang, Peking University; and Ning Wang, Xinmeihutong Inc., Beijing.