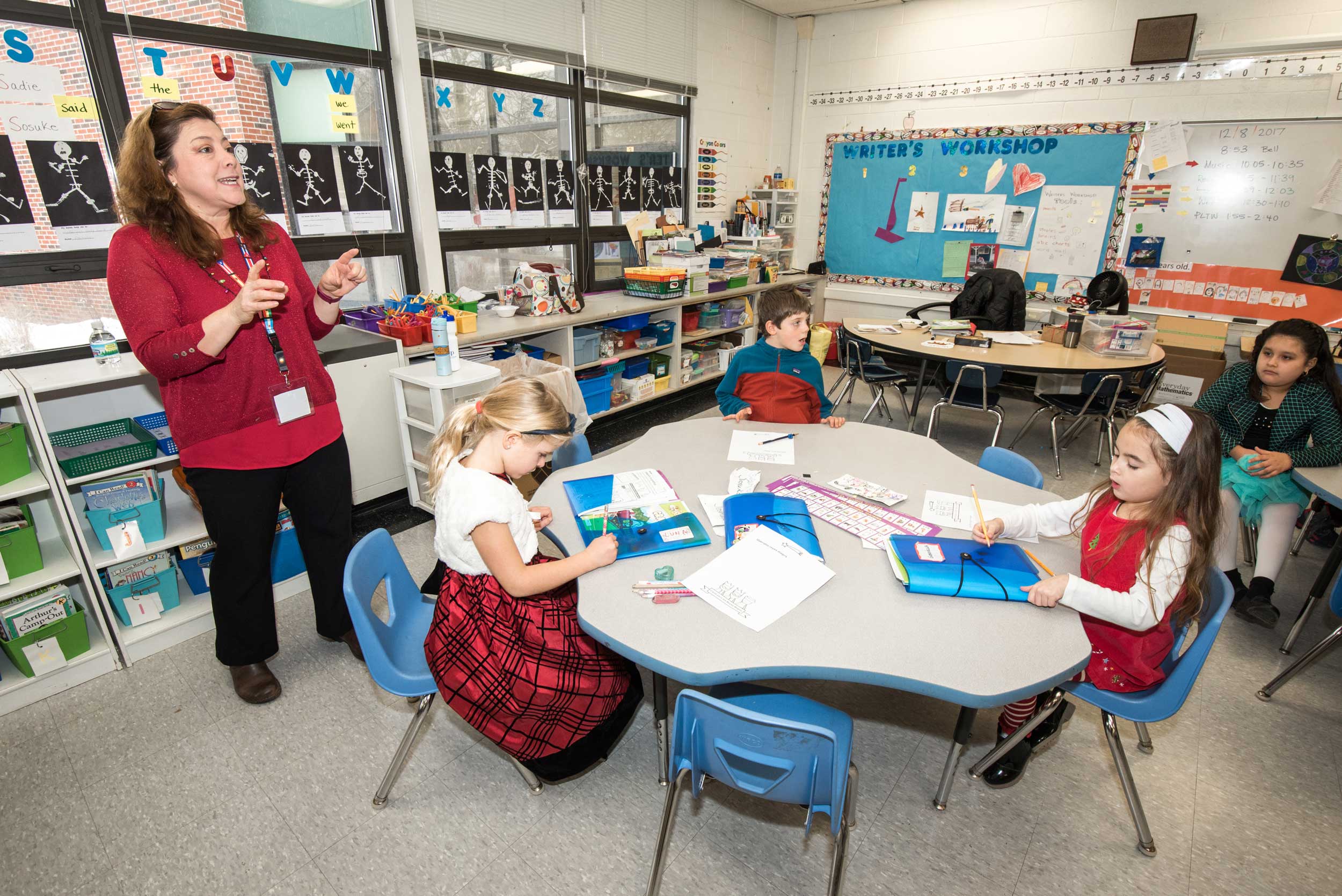 ANN ARBOR—”Ojos aquí,” calls teacher Patricia Valdivieso, a command that translates to “eyes on me.” At this, 19 second graders in a Michigan elementary school slowly quiet down.

“Does anyone know in what country people celebrate Three Kings’ Day?” she asks, still in Spanish as hands shoot up as the anxious answers come.

The teacher shakes her head: “No, it’s in Spain and Mexico, when children get to open their presents in January.” 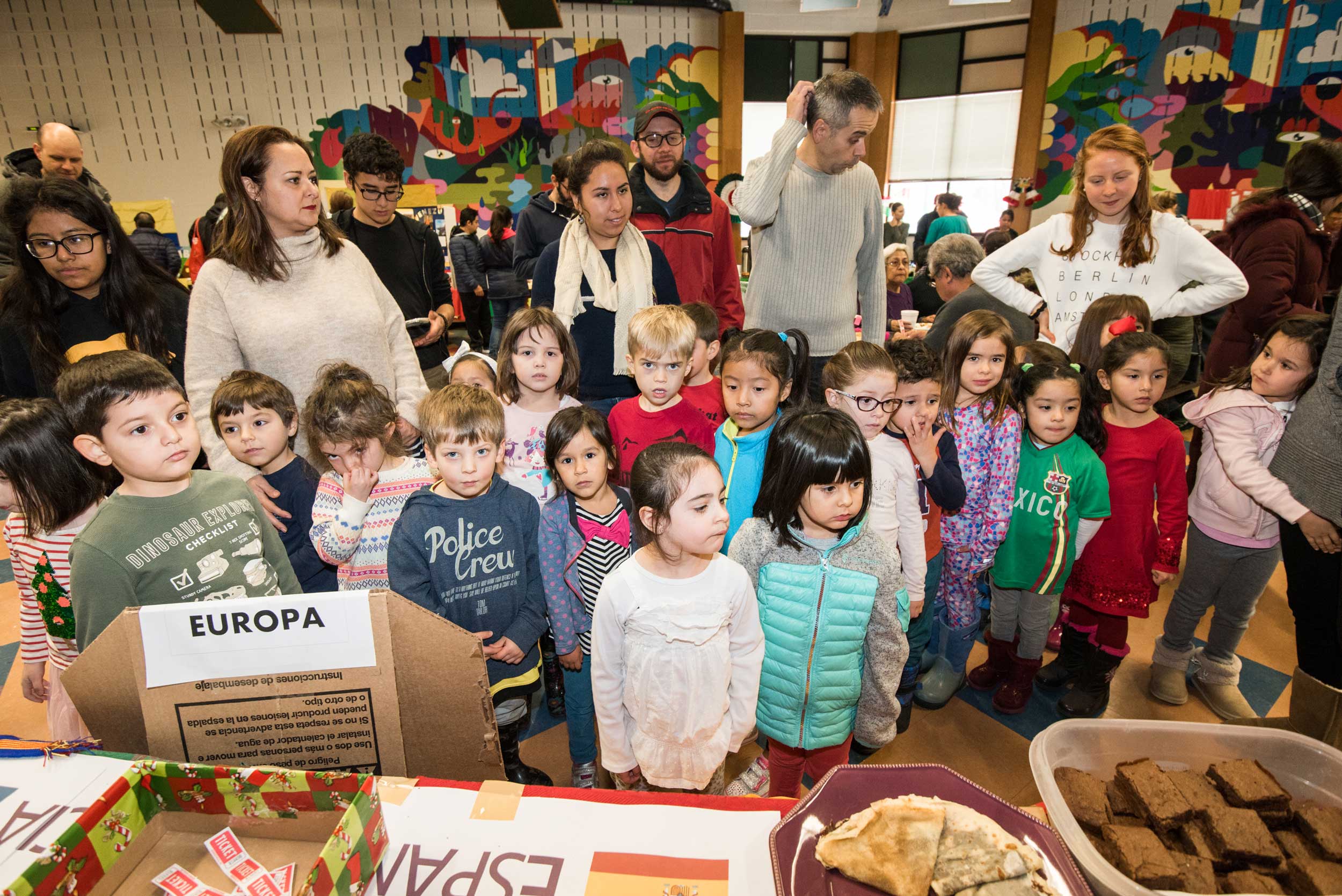 En Nuestra Lengua students line up as they make their way through the Bach Elementary cafeteria during the program’s annual fundraiser that includes sales of traditional foods from Spanish-speaking countries.

Home for the holidays

It’s the last Saturday of the fall semester and, as they do every Saturday, 200 students pre-K to 4th grade spend most of the day at En Nuestra Lengua. This Spanish literacy and cultural development program brings together students, parents, educators, and members from the university community and from the Spanish-speaking community at large to counteract the Latino academic achievement gap by providing native Spanish speakers an opportunity to learn and practice their first language, and to help them become not only bilingual but bicultural and biliterate.

Founded seven years ago by University of Michigan Professors Teresa Satterfield and José Benkí, the program is based at Bach Elementary School in Ann Arbor and consists of a Spanish-language curriculum in math, science and language arts that mirrors the district’s English-based curriculum. To ensure the opportunity is available to those who need it most, there is no tuition charge for enrollment in this educational program that has been highlighted by the Center of Applied Linguistics in Washington, D.C. as a model program worthy of replication.

The program, Satterfield says, is so successful that 80 percent of students perform at grade level in standardized Spanish language and literacy assessments, and 90 percent meet or exceed standardized English measures. Progress exams take place every 10 weeks in the program, and formal end-of-year assessments are carried out. The program also has an educational component for parents—98 percent of whom participate in the program, which has a waiting list as long as the list of students currently enrolled.

The program also collaborates with local and national universities and internship programs, allowing it to receive graduate student interns who provide cutting-edge techniques and information for continual new research components. 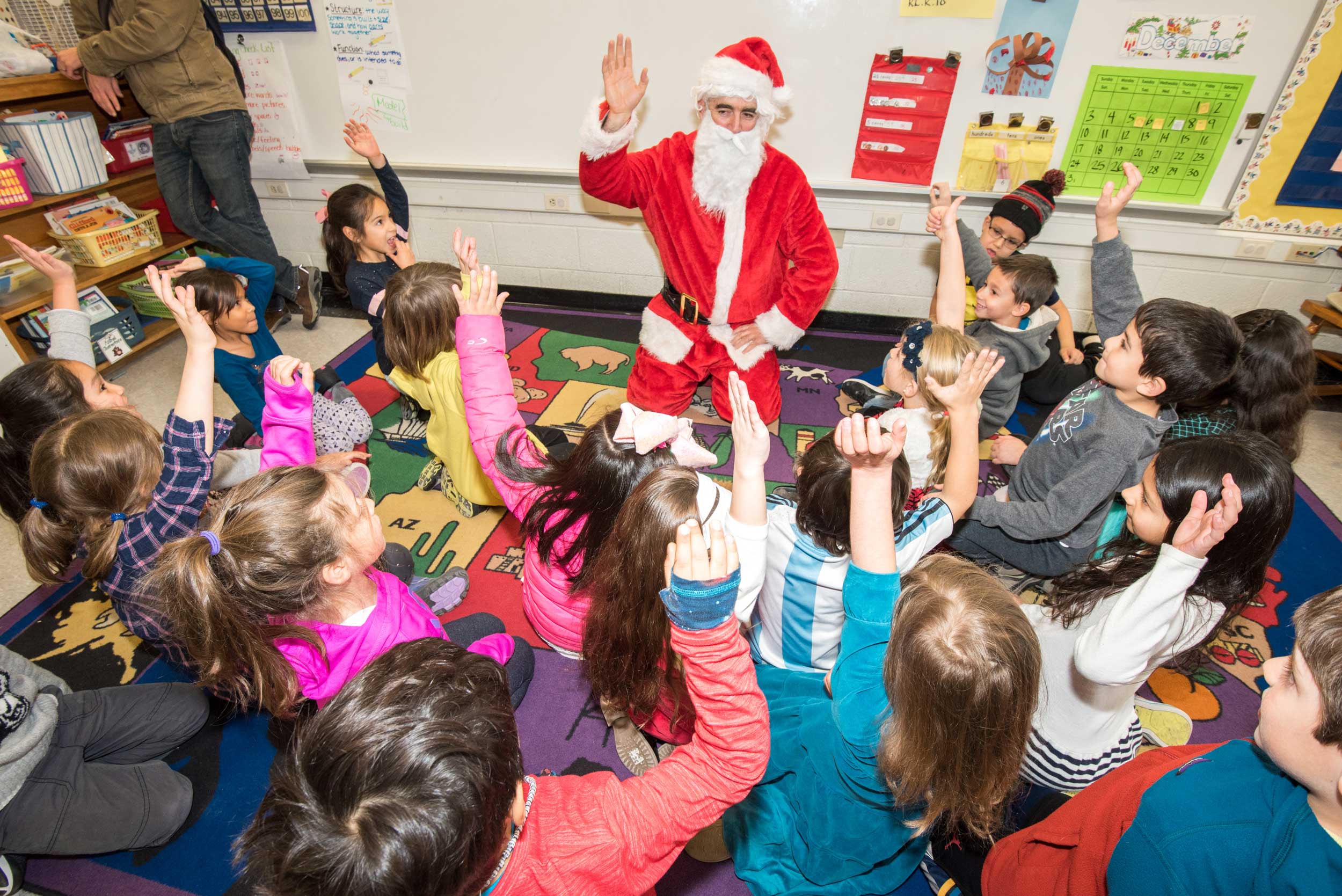 Santa pays a visit to second graders at the Spanish Language Program En Nuestra Lengua before the end of the semester.

Satterfield says she wishes a program like En Nuestra Lengua existed when her family immigrated to the United States from Panama. Upon arriving in the U.S., she was placed in a special education program she did not need.

“For me, this is a very personal journey as well as professional journey,” Satterfield said. “I came to the States when I was six. It was very traumatic. It affected me, and not very positively. I ended up mirroring some of the behaviors that I observed in the other children, who were there for legitimate reasons. I ended up not speaking any language for about a year. I just stopped speaking.”

Eventually, Satterfield learned to fit in but it wasn’t until high school that she rediscovered her native language, Spanish, and also picked up French. Thus began her fascination with learning new languages and opening doors into other cultures. Today, Satterfield is a linguist specializing in language acquisition in the context of U.S. (Afro-) Latino identity and culture.

“I definitely see myself in the children at En Nuestra Lengua,” she said. “I understand the parents’ experience as well of them needing support that they are not necessarily finding in the schools that will help them navigate a new country and the educational system and help them support their children in the way they need to.

“A lot of those parents are intimidated by English. Maybe they don’t understand the things their children are being asked to do in the classroom. It’s something new. The program is filing in that gap so not only the children have success and maintain their language but also the parents understand what the American school system is all about and how they, as Spanish speakers, can model the language and still support their children’s education here in the U.S.”

Satterfield says the Spanish program is unique in its approach to cultivating Latino parental involvement. Concurrent with the children’s Saturday classes, parents and caregivers also participate in weekly information sessions. The workshops, carried out in Spanish, increase parental interactions by helping parents understand the demands of the U.S. classroom, and provide guidance on home practices to encourage classroom learning.

At the beginning and the end of the school year, adults are interviewed and also complete questionnaires concerning family literacy behaviors and attitudes toward education. In assessments, parents report to be at least 50 percent more visible and proactive in their interactions with the local elementary schools, and also engage in at least 50 percent more sound educational practices in the home, according to research co-authored by Viktorija Tijunelis, Satterfield and Benkí.

For parents like Wendy Tashian, the program is invaluable. Originally from Peru and a lecturer at U-M, Tashian said her daughter, Nikki, joined the program at age 5. Nikki is now in “El Club Lectores,” a book club for teenagers to continue practicing their Spanish.

“There are few people in my community who speak Spanish and who have children the same age as my children,” Tashian said. “With this program, we meet other families, we come to the program, we go to the park, we have dinner together. We’ve been able to form a beautiful community. And my 12-year-old reads books, analyzes them, critiques them, in Spanish, and I love it.”

Victor Kareh also is a fan. His oldest son just started attending the program this year.

“It’s very important for me that he learns Spanish, first to be able to communicate with his grandma, with the uncles and aunts, and with everyone who speaks Spanish,” said Kareh, who is from Puerto Rico and has lived in the area for over a decade. “And I think it’s important to be bilingual. It’s part of my culture. We’re bilingual by tradition and to be able to maintain that bilingualism is important.” 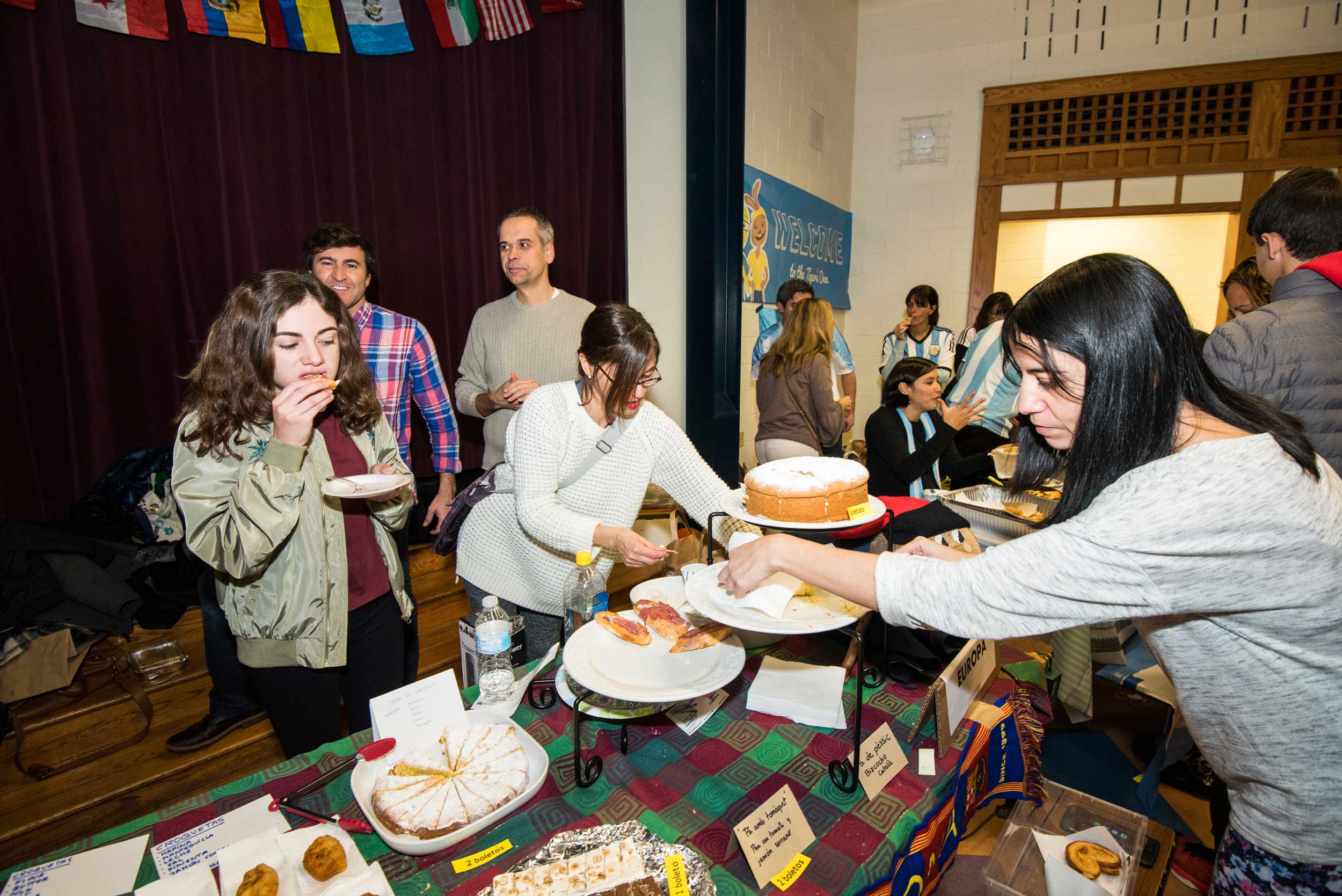 Parents and community members participate in En Nuestra Lengua’s annual fundraiser featuring traditional foods from Spanish Speaking countries. The funds will go to pay in part for the program, which is free of charge to parents.

On finals day in the En Nuestra Lengua program at Bach Elementary, the students are settling in for their tests. Down the hall, their parents prepare for the annual fundraiser in the school’s cafeteria. Up for sale will be the homemade dishes prepared by the parents themselves, arranged by country of origin: arepas from Colombia, merengues and alfajores from Argentina, coffee from Nicaragua, tea from Guatemala.

And while the main objective of the event is to raise funds for the Spanish program, the activity will soon morph into a community gathering. Parents talk about the differences and similarities between the dishes and exchange phone numbers as the children arrive, fresh from their test.

“That’s from Argentina,” says one girl, in Spanish. She recognized the flag in front of the table. At another table, a teacher points out dishes from Mexico, and how they differ from those in Colombia.

“I love that my children are in this program, learning about the culture and getting to know immigrants from all different countries,” said Cristina Arriaga, originally from Spain, whose three children are ages 5, 7 and 10.

“It has been amazing for my son’s development not only academically but socially to be able to integrate himself in the Latino community,” said Catalina Ormsby, assistant director for the Undergraduate Research Opportunity Program at U-M.

Ormsby is originally from Colombia, and her son Anthony has been in the program for three years.

“It’s amazing to be able to have this program in Ann Arbor and be able to share it with Latino families in the community,” she said.