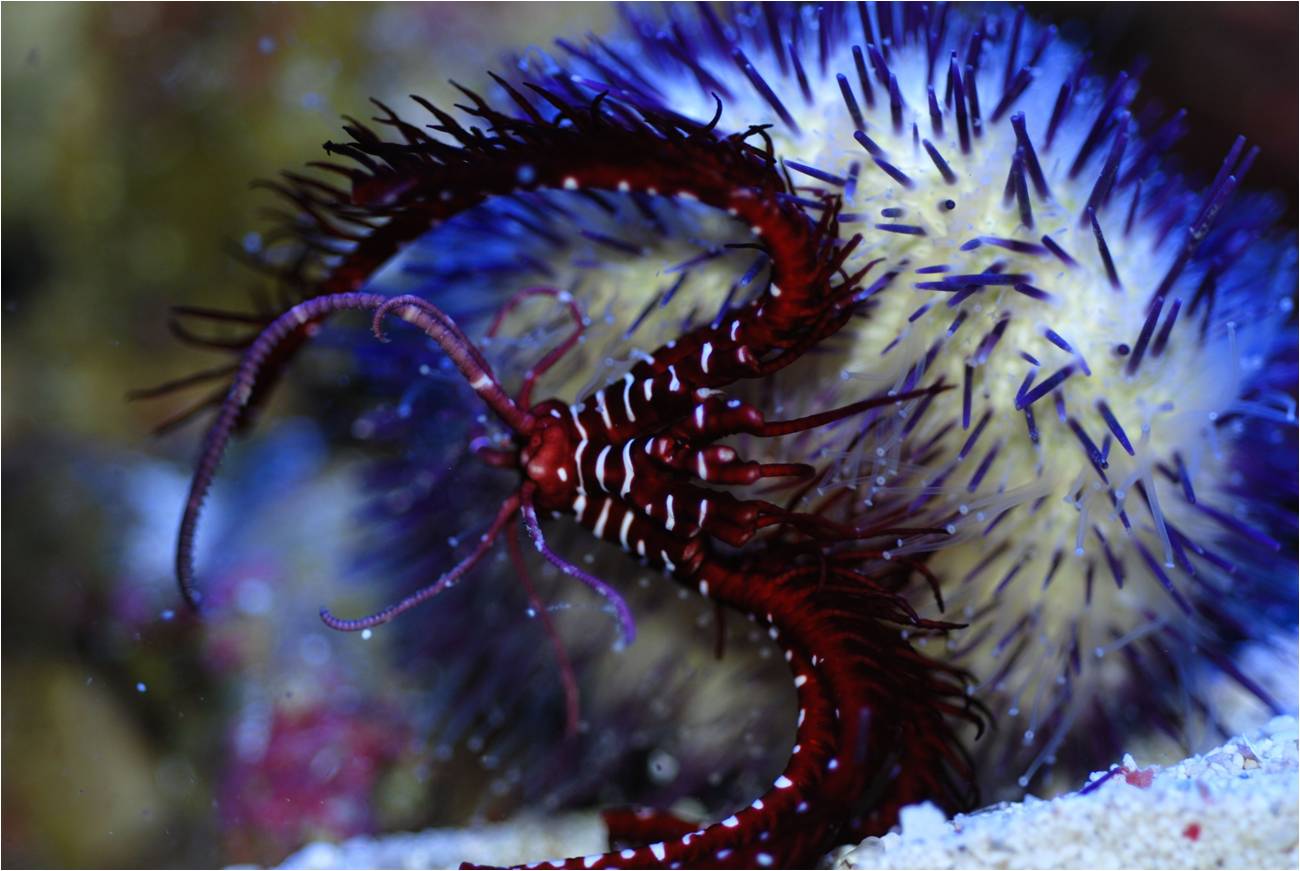 A sea urchin (the whitish globular object on the right, covered with purple-tipped spines) feeding on a crinoid (red-and-black arms with white bands) in an aquarium. The urchin uses its spines and the teeth of its jaw to manipulate and ingest the crinoid. The sea urchin is about the size of a baseball. Image credit: F.J. Gahn and M.A. Strong.ANN ARBOR—Nature teems with examples of evolutionary arms races between predators and prey, with the predator species gradually evolving a new mode of attack for each defensive adaptation that arises in the prey species.

These adaptations are often portrayed as reciprocal, with prey and predator acting as two sides in an endless evolutionary tug of war known as co-evolution.

Now a University of Michigan paleontologist and his colleagues report an example of a much more one-sided, asymmetrical predator-prey relationship. The predators in this case are sea urchins, and over a nearly 200-million-year span they appear to have been in the driver’s seat, forcing evolutionary adaptations upon marine animals called crinoids, which include the sea lily.

Hungry sea urchins even drove the formerly stationary, or sessile, sea lilies to develop the ability to escape by creeping along the ocean floor.

“In this case, the predators have a greater impact on their prey than the other way around,” said Tomasz Baumiller, professor of earth and environmental sciences and a curator at the U-M Museum of Paleontology. “What we’re showing is evidence for the evolutionary concept called escalation.”

The above video shows a sea urchin approaching a feather star crinoid from the left, attacking it, then consuming it. The video was shot at the Coral Reef Research Foundation in Palau in January 2010. Both specimens were collected by scuba divers and placed in a temperature-controlled water tank. This time-lapse video clip covers a roughly six-hour period. Video by Tomasz K. Baumiller.

The escalation hypothesis was proposed by evolutionary biologist and paleontologist Geerat Vermeij in 1987. It predicts that long-term ecological shifts are caused by the evolutionary response of prey to predation pressure. The idea has been contentious in part because hard evidence to support it has been difficult to come by.

Baumiller and his colleagues present their findings in an article titled “Predator-induced macroevolutionary trends in Mesozoic crinoids,” published online April 16 in the Proceedings of the National Academy of Sciences. The other authors are Przemyslaw Gorzelak of the Institute of Paleobiology at the Polish Academy of Sciences and Mariusz A. Salamon of the University of Silesia in Poland.

Sea lilies have long stalks and feathery arms that they extend to catch bits of plankton or detritus passing in the current.

In previous work, Baumiller and his colleagues showed that fragments of modern-day sea-lily stalks that pass undigested through sea urchins often bear bite marks: distinctive scratches and pits that match the size and shape of the teeth in the urchin’s “mouth.”

Nearly identical bite marks have been preserved in the fossil record across Central Europe in places like Poland. In a 2010 PNAS paper, Baumiller and others used more than 2,500 crinoid-stalk fossils to show that sea urchins preyed on crinoids 225 million years ago, in the early Mesozoic Era.

The 2010 paper provided a snapshot in time. The new report is more like a feature-length film. It shows how sea urchins and crinoids interacted over a 160-million-year span, beginning 225 million years ago and continuing through the end of the Mesozoic Era 65 million years ago.

Over that span many crinoids became motile, developing the ability to escape sea urchins, some by shedding their stalk ends like lizards’ tails and crawling away. Other crinoids remained sessile.

In their latest PNAS paper, the researchers show that bite-mark frequencies on crinoids generally increased throughout the Mesozoic. Moreover, the frequencies of bite marks on motile crinoids were lower than those on sessile crinoids, a pattern consistent with the idea that motility constitutes an effective escape strategy.

The researchers examined more than 5,000 fossil crinoid specimens collected at 32 sites in Central Europe. In addition, they analyzed genus-level diversity histories of sea urchins and crinoids obtained from the Paleobiology Database and other literature sources.

That pattern is what would be expected if the escalation hypothesis is correct and predatory sea urchins drove the observed long-term ecological shifts, Baumiller said.

“It appears that the predators are driving one group to lower diversities and another group toward higher diversities, and that pattern makes sense in an escalation context,” he said. “In this case, the causal arrow is much more consistent with predators driving prey diversities.”

Today, motile crinoids predominate in shallow-sea environments while sessile forms are restricted to deep-water sites where predator pressure is low. Crinoids, which are related to starfish, consist of two groups: sea lilies and feather stars.

The research was funded by the National Geographic Society, the National Science Foundation and Poland’s State Committee for Scientific Research.