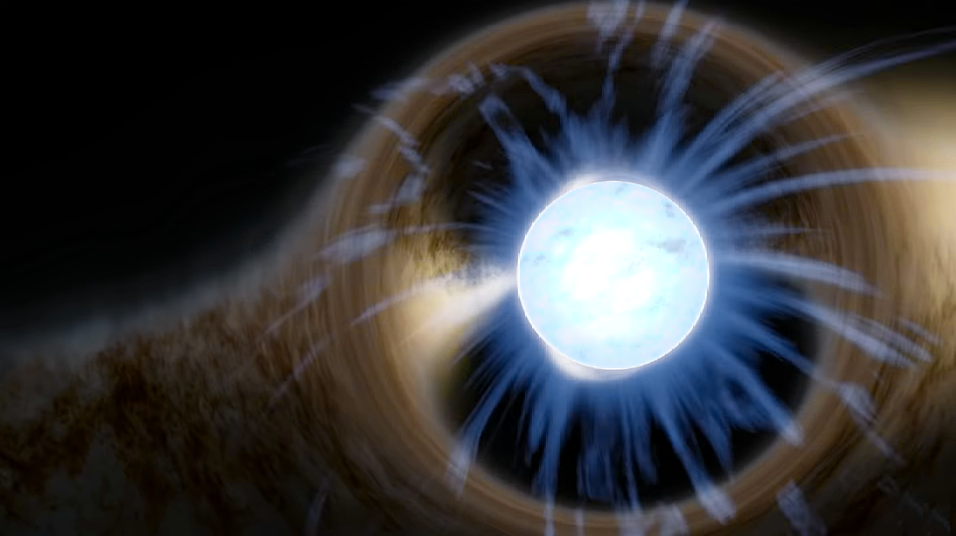 A team of scientists including a University of Michigan researcher have found that mysterious X-rays detected from nearby neutron stars may be the first evidence of axions, hypothetical particles that may also help unravel secrets about dark matter.

If their theory is confirmed, the researchers’ findings could help physicists unravel several mysteries of the universe. Their paper is published in Physical Review Letters.

There are many kinds of particles that make up matter in the universe. The most common are protons, neutrons and electrons. These particles collide with each other in certain settings, such as inside a star’s core or in particle accelerators built by scientists on Earth. Axions have long been elusive to physicists because they are “weakly interacting,” which means they rarely collide with other particles and instead often pass through them.

“The axion was first proposed in the late 1970s to solve this problem called the strong CP problem, which means the negative and positive electric charge distributions inside the neutron are centered around the same point,” said Christopher Dessert, a co-author of the paper and graduate student in physics at U-M. “In the next decade, it was discovered that if the axion existed, it could also be dark matter.”

Theoretically, axions can be created by other particles colliding or exist naturally as dark matter, which physicists believe makes up a large percentage of the universe that we cannot directly see. The discovery of axions would answer many questions about dark matter and other particle physics mysteries. Axions are also predicted by string theory, or the idea that all the forces and particles in the universe are tied together as part of the same framework.

“Finding axions has been one of the major efforts in high-energy particle physics, both in theory and in experiments,” said co-author Raymond Co, a postdoctoral researcher at the University of Minnesota and formerly of the University of Michigan. “We think axions could exist, but we haven’t discovered them yet. You can think of axions as ghost particles. They can be anywhere in the universe, but they don’t interact strongly with us so we don’t have any observations of them yet.”

In 2019, Co, Dessert and their fellow researchers, led by Benjamin Safdi, then at Michigan and currently at Lawrence Berkeley National Laboratory, observed a mysterious, inexplicable increase in X-rays emitted from several neutron stars, which are extremely dense stars made up mostly of neutrons. In a recent paper, the team proposed that these extra X-rays are caused by axions being produced in the neutron stars’ cores.

The researchers used a previously proposed theory about axions to explain this phenomenon. The theory states that axions are produced in the core of a neutron star as byproducts of colliding neutrons and protons. The particles then shoot out into the star’s strong magnetic field, where they are converted into photons—particles of light—which make up the X-rays detected by telescopes on Earth. Since axions carry much more energy than the photons these neutron stars typically emit, the photons produced from the axions would yield more energy as well, explaining the unexpected increase in X-rays.

The researchers say this study does not definitively establish the existence of the axion, but it provides compelling evidence for it. Dessert said the unexpected increase could be an artifact of the X-ray telescopes used to make their observations, or another as-yet unobserved process in the neutron star.

“But we spent an enormous amount of time in that first paper checking to make sure the signal we were seeing is real, and we’re very, very confident that it is,” Dessert said. “As far as whether it’s an axion—it could be a new astrophysical process in the neutron star we haven’t thought of. But it’s certainly consistent with the existence of an axion making this signal.”

One way to determine the source of the signal is to use data from a newer X-ray telescope, NASA’s NuSTAR, or Nuclear Spectroscopic Telescope Array. The telescopes used in the current work, the European Space Agency’s XMM-Newton and NASA’s Chandra X-ray Observatory, are not sensitive to the full range of energies the axion may produce.

“If it turns out an axion is causing this signal, the Chandra and XMM-Newton telescopes would only actually see a small amount of the signal that would be coming from the axion,” Dessert said. “A lot of it would be happening at even higher energies than Chandra and XMM-Newton can look at. If we got data from NuSTAR, we could say more confidently, ‘What are the properties of this axion, if it is indeed causing the signal?'”

In addition to Dessert, Co and Safdi, members of the research team include Malte Buschmann, a postdoctoral researcher at Princeton University. The research was funded by grants from the Department of Energy’s Office of Science and supported by Advanced Research Computing at the University of Michigan.