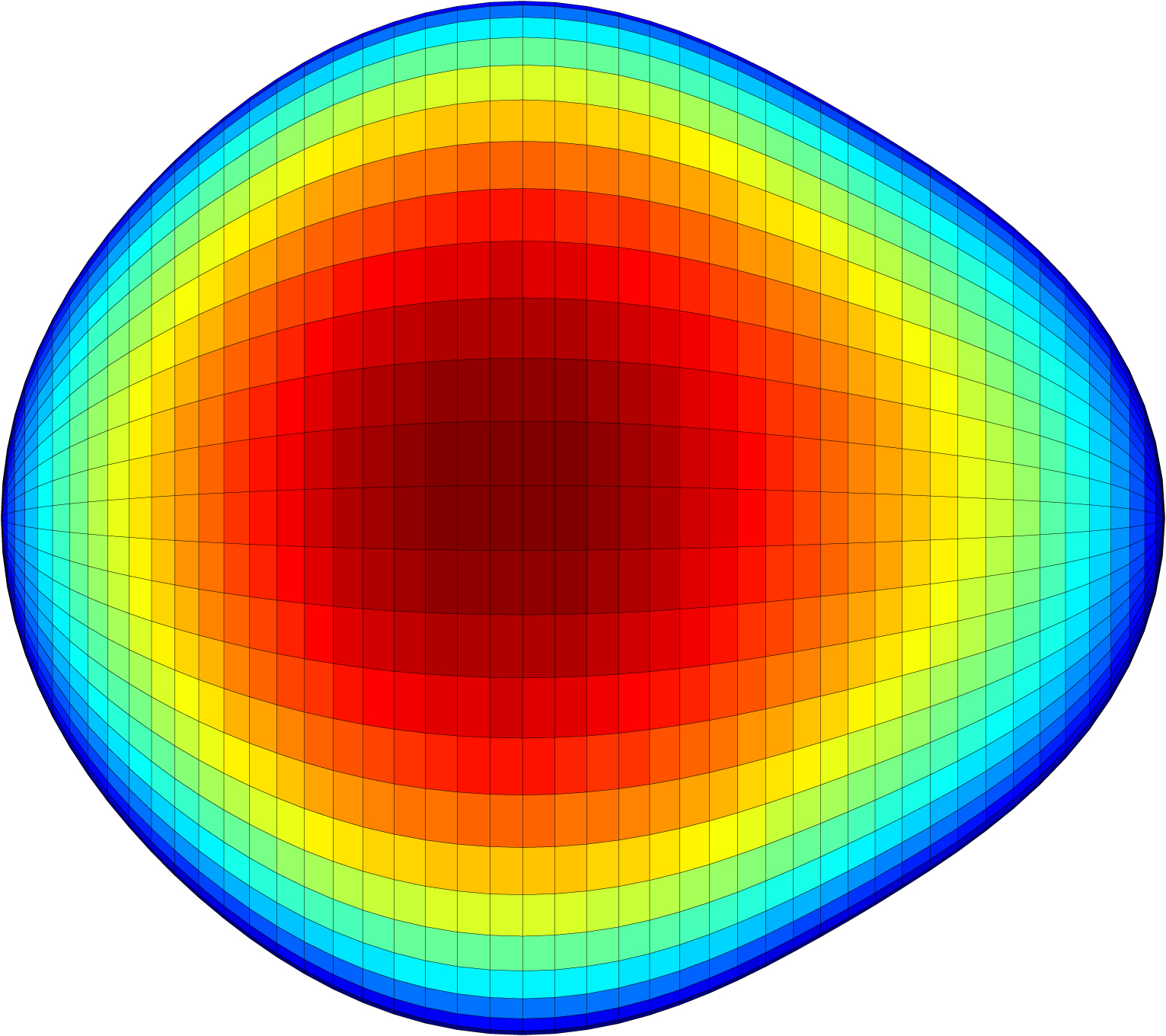 A graphical representation of the pear-shaped nucleus of an exotic atom. The shape of the nucleus could give clues to why the universe contains more matter than antimatter. Image credit: Liam Gaffney and Peter Butler, University of LiverpoolANN ARBOR—An international team of physicists has found the first direct evidence of pear shaped nuclei in exotic atoms.

The findings could advance the search for a new fundamental force in nature that could explain why the Big Bang created more matter than antimatter—a pivotal imbalance in the history of everything.

“If equal amounts of matter and antimatter were created at the Big Bang, everything would have annihilated, and there would be no galaxies, stars, planets or people,” said Tim Chupp, a University of Michigan professor of physics and biomedical engineering and co-author of a paper on the work published in the May 9 issue of Nature.

Antimatter particles have the same mass but opposite charge from their matter counterparts. Antimatter is rare in the known universe, flitting briefly in and out of existence in cosmic rays, solar flares and particle accelerators like CERN’s Large Hadron Collider, for example. When they find each other, matter and antimatter particles mutually destruct or annihilate.

What caused the matter/antimatter imbalance is one of physics’ great mysteries. It’s not predicted by the Standard Model—the overarching theory that describes the laws of nature and the nature of matter.

The Standard Model describes four fundamental forces or interactions that govern how matter behaves: Gravity attracts massive bodies to one another. The electromagnetic interaction gives rise to forces on electrically charged bodies. And the strong and weak forces operate in the cores of atoms, binding together neutrons and protons or causing those particles to decay.

Physicists have been searching for signs of a new force or interaction that might explain the matter-antimatter discrepancy. The evidence of its existence would be revealed by measuring how the axis of nuclei of the radioactive elements radon and radium line up with the spin.

The researchers confirmed that the cores of these atoms are shaped like pears, rather than the more typical spherical orange or elliptical watermelon profiles. The pear shape makes the effects of the new interaction much stronger and easier to detect.

“The pear shape is special,” Chupp said. “It means the neutrons and protons, which compose the nucleus, are in slightly different places along an internal axis.”

The pear-shaped nuclei are lopsided because positive protons are pushed away from the center of the nucleus by nuclear forces, which are fundamentally different from spherically symmetric forces like gravity.

“The new interaction, whose effects we are studying does two things,” Chupp said. “It produces the matter/antimatter asymmetry in the early universe and it aligns the direction of the spin and the charge axis in these pear-shaped nuclei.”

To determine the shape of the nuclei, the researchers produced beams of exotic—short-lived—radium and radon atoms at CERN’s Isotope Separator facility ISOLDE. The atom beams were accelerated and smashed into targets of nickel, cadmium and tin, but due to the repulsive force between the positively charged nuclei, nuclear reactions were not possible. Instead, the nuclei were excited to higher energy levels, producing gamma rays that flew out in a specific pattern that revealed the pear shape of the nucleus.

“In the very biggest picture, we’re trying to understand everything we’ve observed directly and also indirectly, and how it is that we happen to be here,” Chupp said.

The research was led by University of Liverpool Physics Professor Peter Butler.

“Our findings contradict some nuclear theories and will help refine others,” he said.

The measurements also will help direct the searches for atomic EDMs (electric dipole moments) currently being carried out in North America and Europe, where new techniques are being developed to exploit the special properties of radon and radium isotopes.

“Our expectation is that the data from our nuclear physics experiments can be combined with the results from atomic trapping experiments measuring EDMs to make the most stringent tests of the Standard Model, the best theory we have for understanding the nature of the building blocks of the universe,” Butler said.