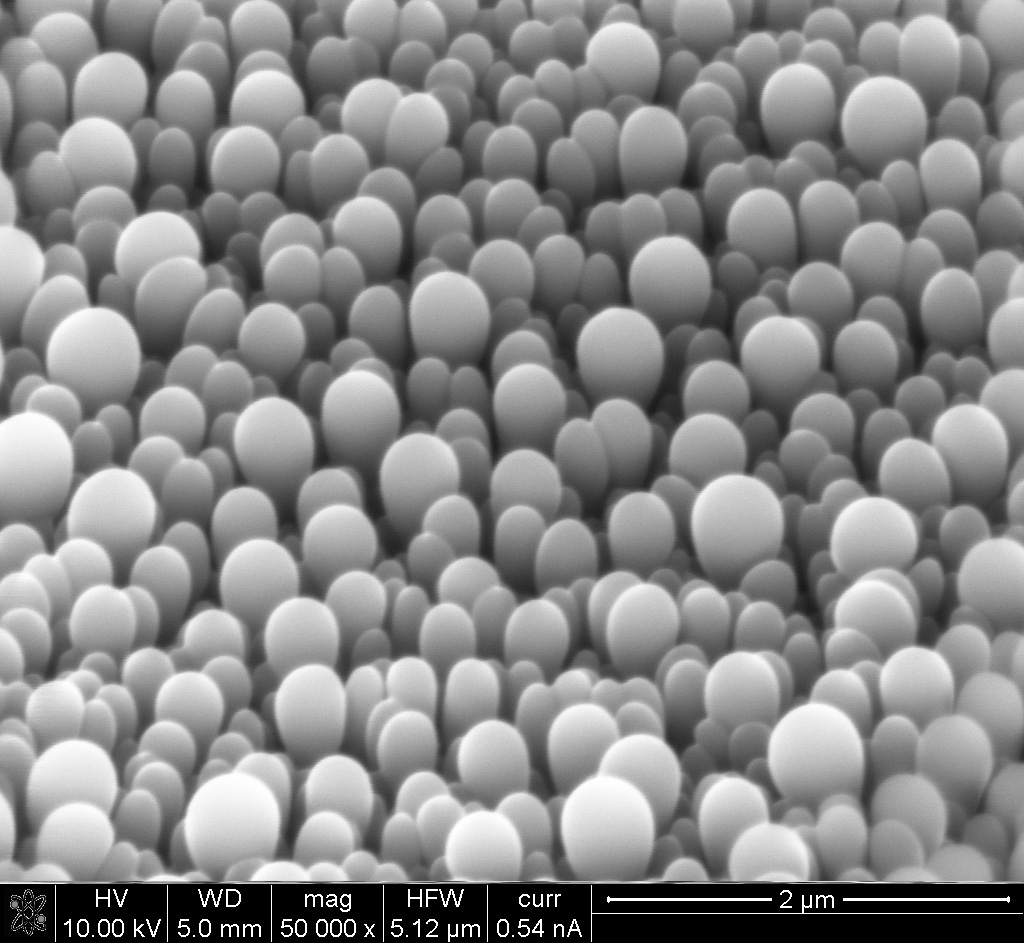 University of Michigan engineering professors have made rounded crystals with no facets, a structure occasionally found in nature but difficult to produce in a lab. Image credit: Max ShteinANN ARBOR—In a design that mimics a hard-to-duplicate texture of starfish shells, University of Michigan engineers have made rounded crystals that have no facets.

“We call them nanolobes. They look like little hot air balloons that are rising from the surface,” said Olga Shalev, a doctoral student in materials science and engineering who worked on the project.

Both the nanolobes’ shape and the way they’re made have promising applications, the researchers say. The geometry could potentially be useful to guide light in advanced LEDs, solar cells and nonreflective surfaces.

A layer might help a material repel water or dirt. And the process used to manufacture them—organic vapor jet printing—might lend itself to 3D-printing medications that absorb better into the body and make personalized dosing possible.

“In my years of working with these kinds of materials, I’ve never seen shapes that looked like these. They’re reminiscent of what you get from biological processes,” Shtein said. “Nature can sometimes produce crystals that are smooth, but engineers haven’t been able to do it reliably.”

Echinoderm sea creatures such as brittle stars have ordered rounded structures on their bodies that work as lenses to gather light into their rudimentary eyes. But in a lab, crystals composed of the same minerals tend either to be faceted with flat faces and sharp angles, or smooth, but lacking molecular order.

The U-M researchers made the curved crystals by accident several years ago. They’ve since traced their steps and figured out how to do it on purpose.

In 2010, Shaurjo Biswas, then a doctoral student at U-M, was making solar cells with the organic vapor jet printer. He was recalibrating the machine after switching between materials. Part of the recalibration process involves taking a close look at the fresh layers of material, of films, printed on a plate.

Biswas X-rayed several films of different thicknesses to observe the crystal structure. He noticed that the boron subphthalocyanine chloride, which typically does not form ordered shapes, started to do so once the film got thicker than 600 nanometers. He made some thicker films to see what would happen.

“At first, we wondered if our apparatus was functioning properly,” Shtein said.

At 800 nanometers thick, the repeating nanolobe pattern emerged every time.

For a long while, the blobs were lab curiosities. Researchers were focused on other things. Then doctoral student Shalev got involved. She was fascinated by the structures and wanted to understand the reason for the phenomenon. She repeated the experiments in a modified apparatus that gave more control over the conditions to vary them systematically.

Shalev collaborated with physics professor Roy Clarke to gain a better understanding of the crystallization, and mechanical engineering professor Wei Lu to simulate the evolution of the surface. She’s first author of a paper on the findings published in the current edition of Nature Communications.

“As far as we know, no other technology can do this,” Shalev said.

The organic vapor jet printing process the researchers use is a technique Shtein helped to develop when he was in graduate school. He describes it as spray painting, but with a gas rather than with a liquid. It’s cheaper and easier to do for certain applications than competing approaches that involve stencils or can only be done in a vacuum, Shtein says. He’s especially hopeful about the prospects for this technique to advance emerging 3D-printed pharmaceutical concepts.

For example, Shtein and Shalev believe this method offers a precise way to control the size and shape of the medicine particles, for easier absorption into the body. It could also allow drugs to be attached directly to other materials and it doesn’t require solvents that might introduce impurities.

The study is titled “Growth and modelling of spherical crystalline morphologies of molecular materials.” The research was funded by the U.S. Department of Energy, Office of Basic Energy Sciences as part of the Center for Solar and Thermal Energy Conversion. Support also came from the National Science Foundation and the Air Force Office of Scientific Research.