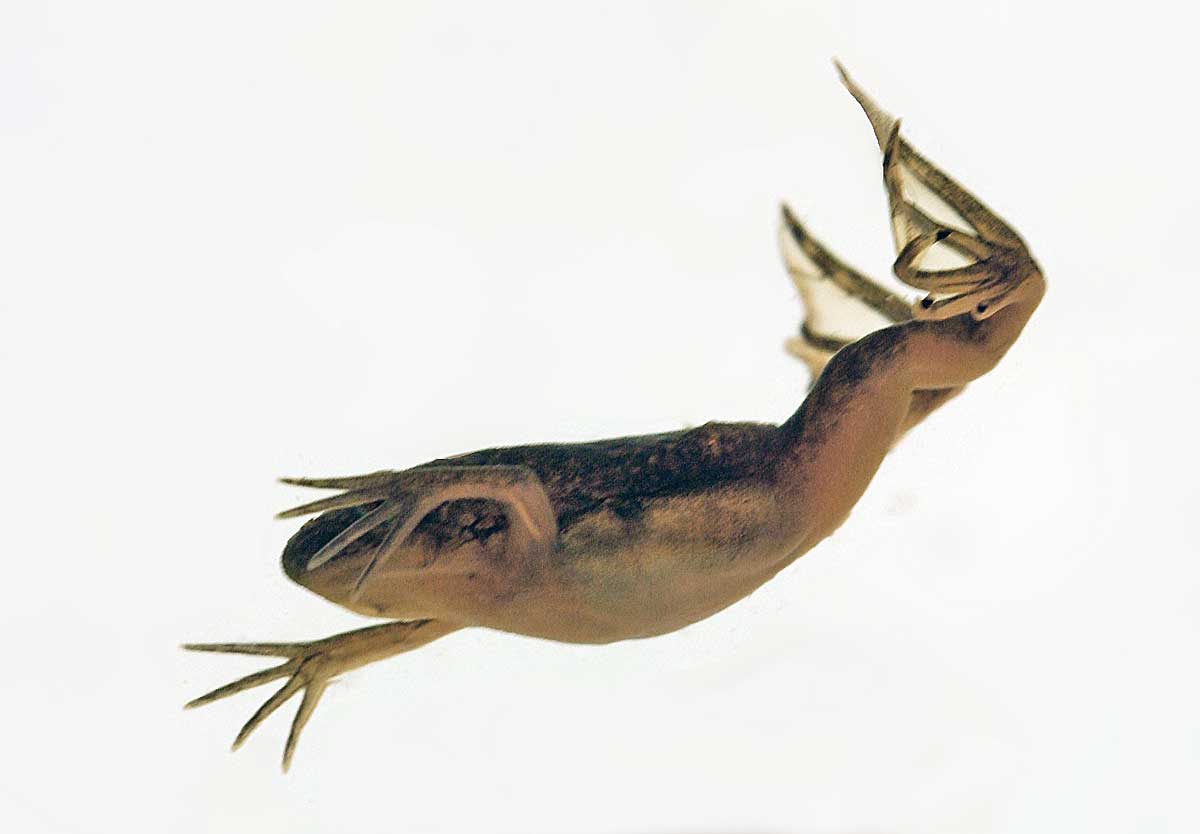 Developmental biologist Robert Denver and his lab discovered that the hormone leptin helps bring a stop to the voracious feeding done by Xenopus laevis in order to allow them to remodel their guts. Image credit: David Bay

ANN ARBOR—When tadpoles are but tadpoles, they’re voracious eaters, chomping down all of the plant matter in their paths.

Now, a University of Michigan study has shown that this voraciousness is because the hormonal and neural brakes to their eating are absent at this stage of development.

“One of the findings from our work is that during the tadpole stage, before they initiate metamorphosis, they don’t have any of these homeostatic negative controls of food intake: they have their feeding controls stuck in the ‘on’ position,” said lead author Robert Denver. “This allows the tadpoles to reach, as quickly as possible, a minimum body size for metamorphosis. If you watch some species of tadpole while they’re eating, they look like tiny piranhas.” 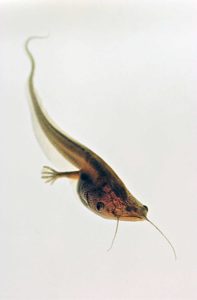 The spike in leptin just before the beginning of metamorphosis helps regions in the brain that control hormone production and food intake mature. As the animal progresses through metamorphosis, its brain develops the ability to respond to leptin by shutting off feeding. This action of leptin is important for the tadpoles because they need to pause their eating at the climax of metamorphosis so that their bodies can overhaul their guts.

The guts are remodeled from a meters-long system that digests a vegetarian diet to a much shorter gut that digests only animal matter. This timing is a tricky balance to get right, says Denver, professor and chair of the U-M Department of Molecular, Cellular and Developmental Biology.

“Most research supports that tadpoles will capitalize on growth conditions because the bigger you are, the less likely you’ll get picked off by predators, and you’ll be a more effective predator once you become a frog,” he said. “On the other hand, if the larval habitat is not favorable—if there are a lot of predators, or if it’s going to dry out—tadpoles will initiate metamorphosis early.”

The researchers also demonstrated that leptin controls the suppression of feeding at metamorphic climax when the gut remodels to support a carnivorous diet. They did this by blocking the leptin signal in the tadpoles’ brains, which caused the tadpoles to resume feeding.

Denver says there are interesting parallels between this process in amphibians and the same process in mammals. Neonatal rats similarly feed (suckle) voraciously until leptin kicks in, at which point they develop negative homeostatic controls so that they don’t overeat. This allows the hypothalamus, a brain region that controls feeding, to mature and prepare the rat to eat solid food.

“What’s happening in the amphibian tadpole is a very ancient process—it’s a developmental, hormonal process that controls the timing of the development of the neural feeding circuitry, which also influences life history transitions,” Denver said. “In a tadpole, compared to mammals, the morphological change is much more dramatic.”

The team’s research is published in the Proceedings of the Royal Society B.