Fault line below Rome set scene for success of city 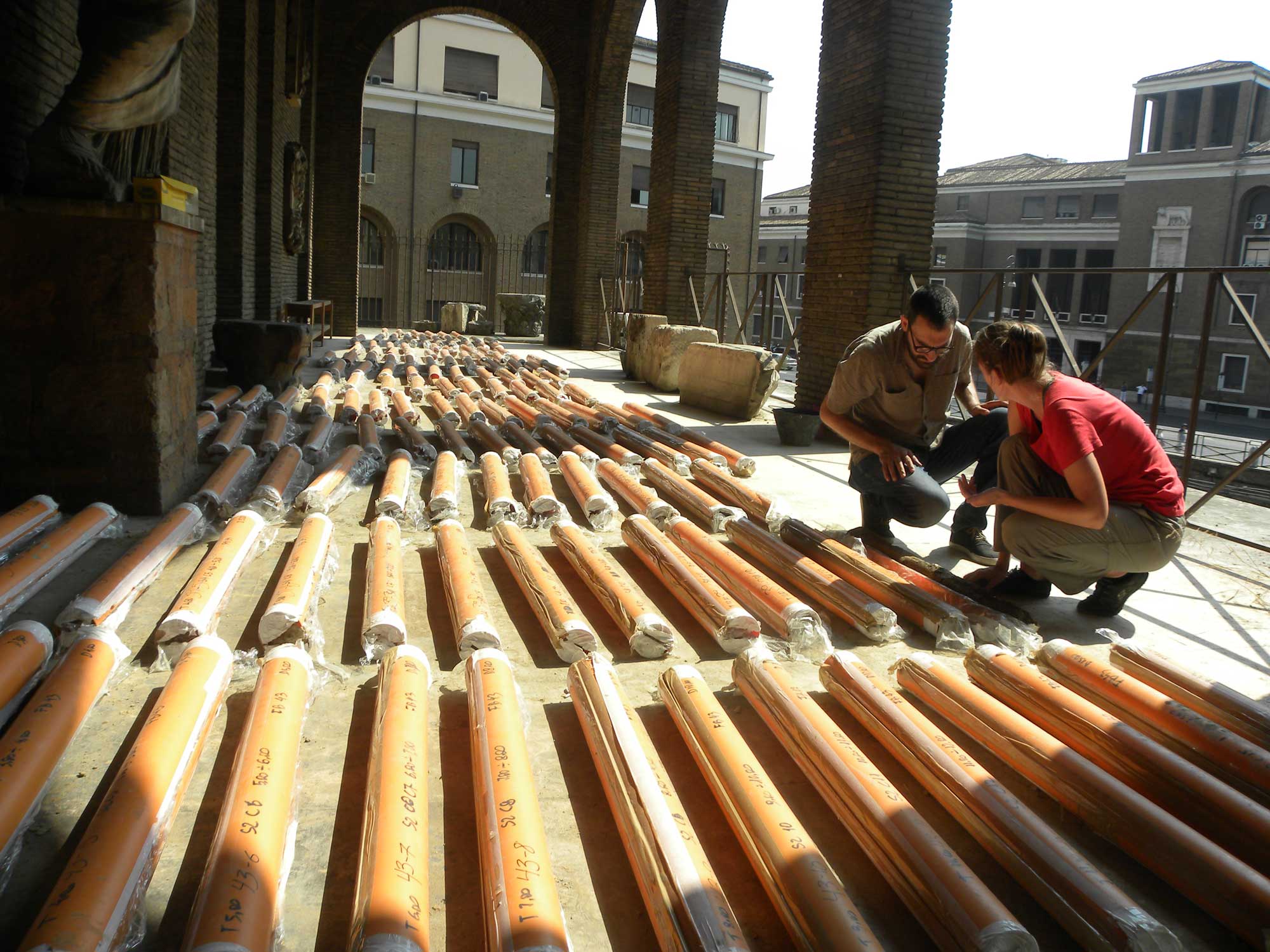 U-M doctoral graduate Andrea Brock and Cristiano Nicosia with the University of Padova check one of the cores for soil horizons and anthropic material. This study produced more than 200 core sections. Image credit: Laura Motta

ANN ARBOR—Rome wasn’t built in a day—but the land that gave the city its economic advantage may have been birthed over a very short period of time, geologically speaking.

A team of researchers, including University of Michigan scientists, has discovered a possible fault line beneath the ancient city. They say the fault line may have formed in the sixth century BCE and displaced the walls of the valley Rome was growing in. This shifted the flow of the Tiber River over a period of less than 100 years, causing an island to grow in the Tiber River, in the heart of Rome.

“The Tiber Island was crucial as a ford to cross the river,” said Laura Motta, U-M environmental archaeologist and co-author of a new paper. “The ability to cross the river fostered the growth of the city’s first river harbor.”

Motta, recent U-M doctoral graduate Andrea Brock and their group wanted to reconstruct the environment and earliest known human activity in the region that would become Rome. Their goal was to determine what differentiated the area from several other settlements at the same time. But this kind of research is difficult: Archaeologists can’t easily excavate a living city, and the city has thousands of years’ worth of human activity layered beneath its feet. So the team included geologists and volcanologists, who used sampling techniques from their fields.

Between the human and climatic impacts on sedimentation in the Tiber River, the Romans continually dredged the harbor to keep it in use. But by the third century, the task proved too great, and the Romans built a second harbor elsewhere. These kinds of long-term interactions between the city of Rome, its urban development and the Tiber River helps inform scientists about the perception and management of risk, adaptation strategies and community environmental resilience, Motta says.

“This is particularly relevant to us, in the present time, as we prepare to deal with climate change and catastrophic flooding,” Motta said. “In other words, this project is shedding valuable light on how urban growth impacts and changes landscape.” 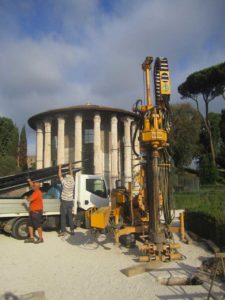 Researchers used a hydraulic drilling rig to take core samples behind the Temple of Portunus in 2015. Image credit: Andrea Brock

In studying the cores, they saw periods of flooding of the Tiber River reflected in layers of sedimentation over the past 6,000 years. Most of these coincided with climatic events, but they also saw an unusually thick layer of sedimentation.

“Suddenly, in the sixth century BCE, you see this dramatic increase in the sedimentation rate,” said Brock, a doctoral graduate of the classical archaeology program at U-M. “In less than a century, nearly six meters of sediment were deposited in the river valley.”

The increase in sedimentation was also very localized, Motta said. Sedimentation and pollen records—another way in which scientists study ancient environments—from areas within tens of kilometers of Rome experienced some changes, but none so dramatic or fast as those underneath the city of Rome. This ruled out a change in climate or in the pattern of rain in the region. 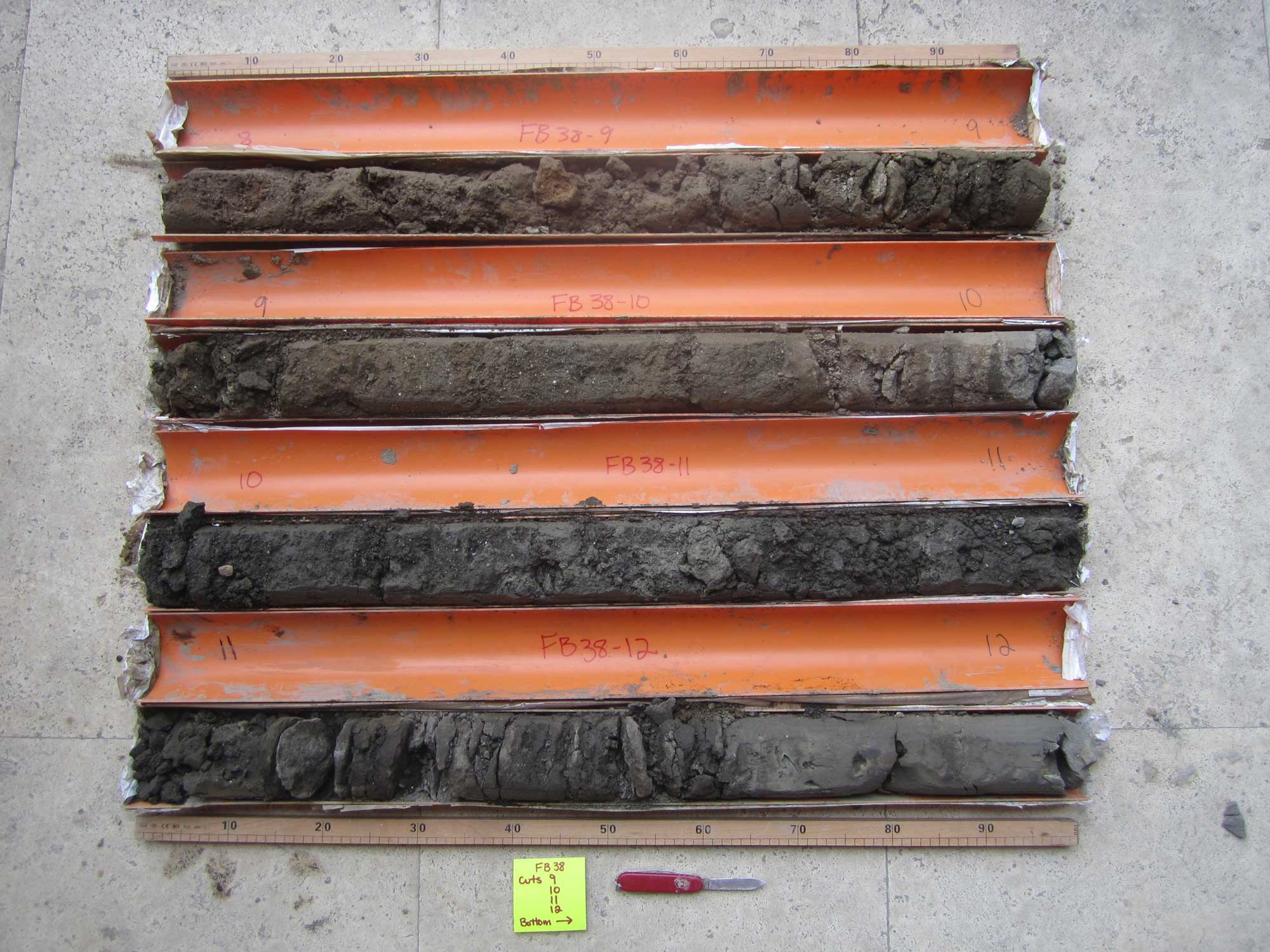 Some of the core sections produced by the drilling machine. Each section is 10 centimeters in diameter and one meter long. Image credit: Andrea Brock

“This triggered some suspicion that there was a fault line that was displacing two sides of the valley,” Motta said.

The impact of humans 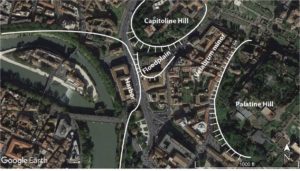 An aerial photo of the Forum Boarium with key features of the pre-urban landscape marked, including the discovered raised section of floodplain at the base of the Capitoline Hill, beneath the Sant’Omobono sanctuary, and the location of the river harbor. Image credit: Andrea Brock

Humans also played a role in the formation of Tiber Island.

“The sixth century marks the time when the Romans began building on a massive scale—temples, monuments, huge public squares—and they needed huge quantities of timber and stone to construct their city,” Brock said.

People mined the landscape to build these temples, unintentionally exacerbating the rate at which the Tiber River was dumping sedimentation in the center of the city. Between the settlers’ building and the fault line’s tipping of the valley walls, an island eventually grew.

“There are multiple factors in these anomalous sedimentation rates that we see. They’re partially climatic, a lot of human impact, and the fault,” Motta said. “All of that created a situation that was conducive to the birth of the Tiber Island, and the Tiber Island is crucial for helping the crossing of the river and fostering the growth of the river harbor in that place.”

The research was conducted as part of the broader Sant’Omobono Project, directed by Nicola Terrenato, a professor of classical studies at U-M, in collaboration with a team of geologists led by Fabrizio Marra at the National Institute of Geophysics and Volcanology in Rome and with the Sovrintendenza Capitolina ai beni culturali di Roma Capitale. The study was published in the journal PLOS One.