ANN ARBOR—Umpteen books and programs are available to help new moms before and after their child is born, but the same can’t be said for fathers, a new University of Michigan study found.

Research suggests that men typically rely on women for parenting knowledge and thus could benefit from encouragement to participate directly in programs and health care visits, said Joyce Lee, the study’s lead author. 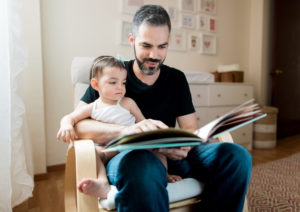 Despite the accumulating evidence for the benefits of father involvement, few perinatal parent educational programs have included dads.

Previous studies show that it’s important to involve fathers in children’s lives as early as possible to promote children’s health and well-being. When dads participate in caretaking and activities, such as reading and active play, it supports children’s development of vocabulary and positive social skills, among other things. But dads need information and support to help them engage with their children early on, and there aren’t many available parenting resources targeting men. The pediatrician and obstetrician offices are often an important resource for new parents, especially through the programs that they offer.

These programs represented a total of 21 out of 1,353 studies the researchers reviewed, demonstrating the very small number of early parent education programs available to fathers. Moreover, the majority of programs lacked evidence of being effective, the researchers say.

However, the U-M study found that some of the father-inclusive parent education programs were linked to increases in father involvement, co-parenting relationships, partner relationship quality, father’s mental health and father’s supportive behaviors.

The researchers say that clinicians can also play a key role in promoting father involvement early on. They can acknowledge and welcome fathers at health care visits, educate fathers about the role they play in their children’s early years, screen for fathers’ postpartum depression, and openly discuss with fathers and mothers about the changes they are likely to experience during pregnancy and after the birth of the infant.

“Research suggests that men typically rely on women for parenting knowledge and thus could benefit from encouragement to participate directly in programs and health care visits,” Lee said. “Male health care staff may be particularly effective in directly engaging fathers.”

Lee says some father-inclusive perinatal educational programs are successful, such as an intervention approach involving a home visitation program add-on for fathers that targets low-income households.