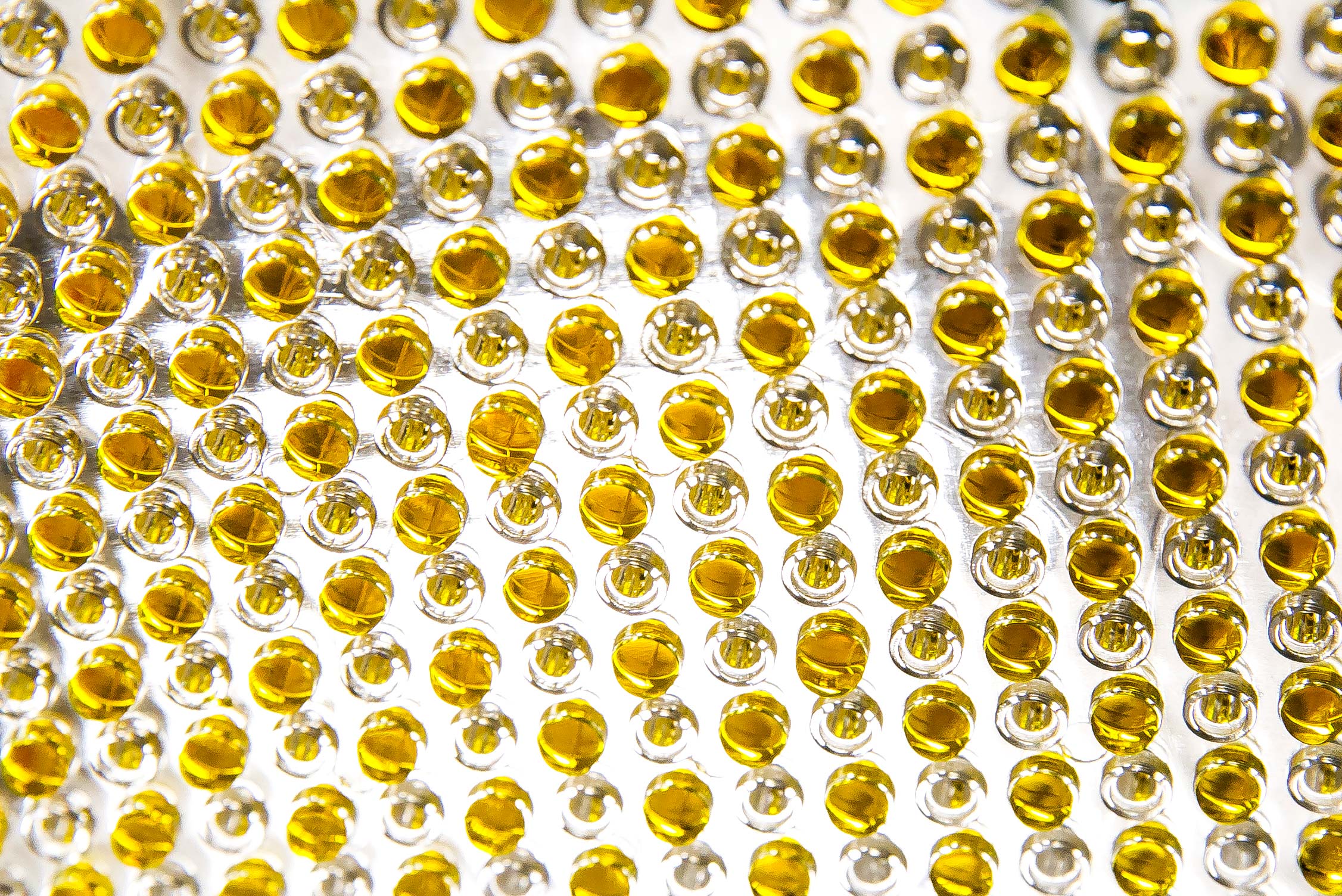 ANN ARBOR—Honeycomb-like arrays of tiny, lab-grown cancers could one day help doctors zero in on individualized treatments for ovarian cancer, an unpredictable disease that kills more than 14,000 women each year in the United States alone.

A team of researchers has devised a process that can grow hundreds of cultured cell masses, called spheroids, from just a few tumor cells derived from a patient. Grown in a U-M-developed structure called a 384-hanging drop array, each spheroid is encased in a tiny droplet of a special culturing medium. This 3-D method yields cells that grow and multiply just as they would inside the body.

Eventually, those spheroids could serve as a testing ground where doctors could quickly try out many different medications, finding the best combination for an individual patient and adjusting on the fly as the disease evolves. This could help them stay one step ahead of the tumor cells inside the patient’s body.

“Today we’re limited to two-dimensional cells grown in bovine serum that’s derived from cows. Cells grown this way often don’t respond to medication the same way as ovarian cancer cells inside the body,” said Geeta Mehta, the Dow Corning Assistant Professor of Materials Science and Engineering at U-M and leader of the research team that developed the technique. “Three-dimensional cultured spheroids provide a much more predictive way to test many different medications, and a way to grow many cultured cells from just a few of the patient-derived cells.”

In a recent study, researchers administered cancer drugs to the cultured cancer spheroids and compared their response to that of ovarian cancer cells that had been removed from the same patient and implanted into mice. They showed that the response of the cultured spheroids accurately mirrored that of the natural cells implanted in the mice. The findings are detailed in a study in the journal Clinical Cancer Research.

Mehta explains that even among cancers, ovarian cancer is particularly menacing. Its free-floating spheroids shuttle cancer through the abdomen with the ability to form new tumors wherever they go—the liver, the intestines, the abdominal wall. And the cells within those spheroids mutate often and unpredictably, quickly developing new strains that resist chemotherapy drugs. 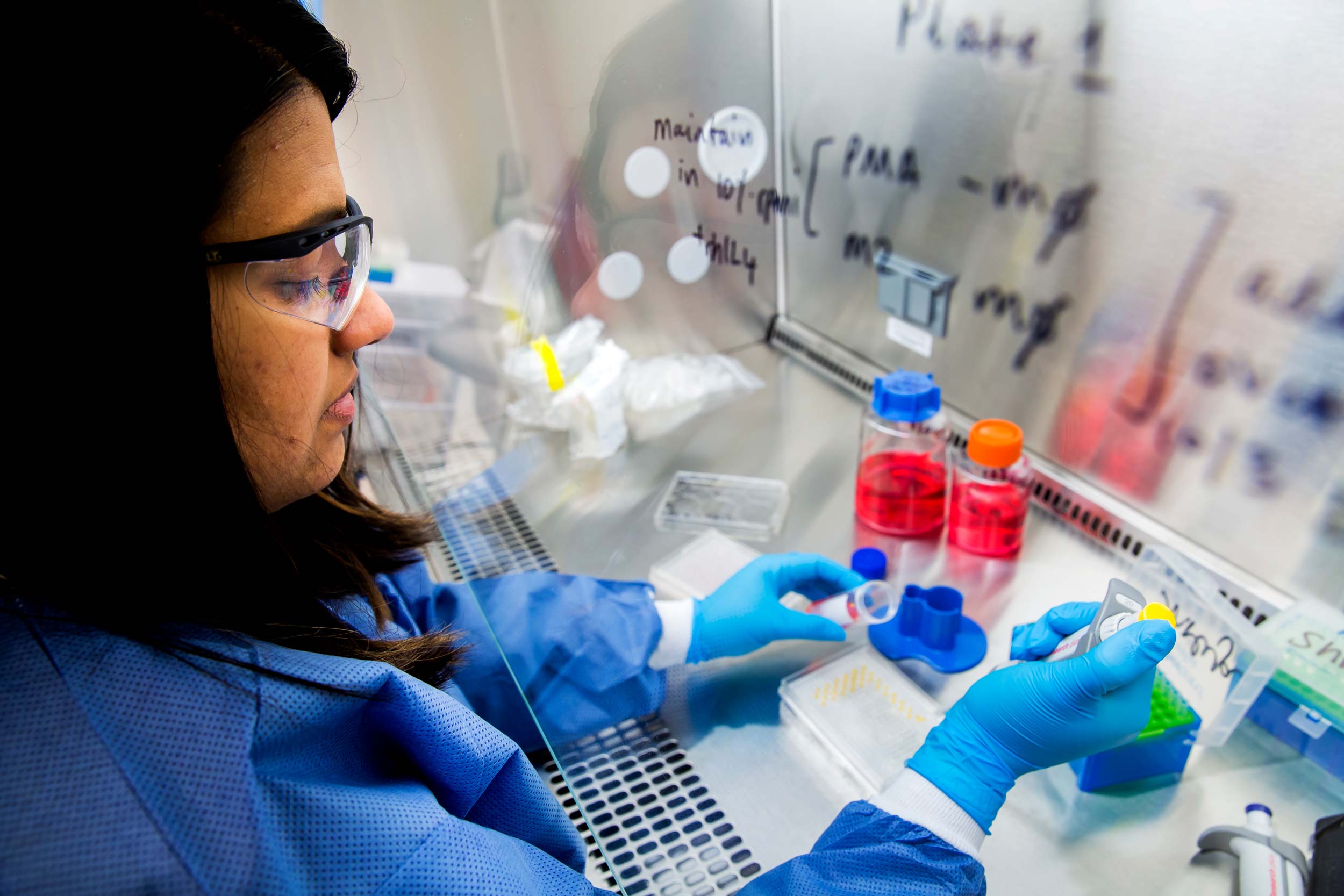 Ovarian cancer’s deadly adaptability contributes to a 70-percent relapse rate among patients who have had surgery to remove a tumor. It’s these patients who Mehta believes may one day benefit from this technique.

The hanging drop array’s hundreds of individual compartments make it possible to grow many spheroids at once and quickly gather data about multiple drugs. This is key, as chemotherapy treatment often requires complex cocktails of multiple drugs administered together. The cells could provide a way to test many such cocktails simultaneously.

While widespread clinical use is likely years off, Mehta says the team now plans to do more extensive testing, culturing cells from patients who are undergoing chemotherapy, then administering the same chemotherapy drugs to the cultured cells and measuring their response.

“This is a really important step to expedite personalized medicine for cancer patients,” said Ronald Buckanovich, a professor of medicine at the University of Pittsburgh and a senior co-author of the study. “The ability to take patients’ samples, rapidly grow them in a more physiologic manner and study their response to therapy, without using mice, will be a faster, cheaper and more humane way to rapidly test a patient’s response to dozens of therapeutics”

The team also plans to expand testing of the treatment beyond cancer stem cells to other cell types with the goal of gaining a broader understanding of the role each cell type plays in building resistance to chemotherapy.

“This gets us closer to an understanding of what treatment options work best, but it also gives us a way to study exactly what happens when a treatment fails,” said study co-author Karen McLean, assistant professor of gynecologic oncology at Michigan Medicine. “And understanding why something doesn’t work can be extremely useful as a way of developing better treatments or treatment combinations.”

The study is titled “Personalized medicine-based approach to model patterns of chemoresistance and tumor recurrence using ovarian cancer stem cell spheroids.” The research was supported by the Department of Defense Ovarian Cancer Research Program Early Career Investigator Awards and by the National Cancer Institute of the National Institutes of Health, award number P30CA046592.