First genetic evidence of resistance in some bats to white-nose syndrome, a devastating fungal disease

ANN ARBOR—A new study from University of Michigan biologists presents the first genetic evidence of resistance in some bats to white-nose syndrome, a deadly fungal disease that has decimated some North American bat populations.

The study involved northern Michigan populations of the little brown bat, one of the most common bats in eastern North America prior to the arrival of white-nose syndrome in 2006. Since then, some populations of the small, insect-eating bat have experienced declines of more than 90%. 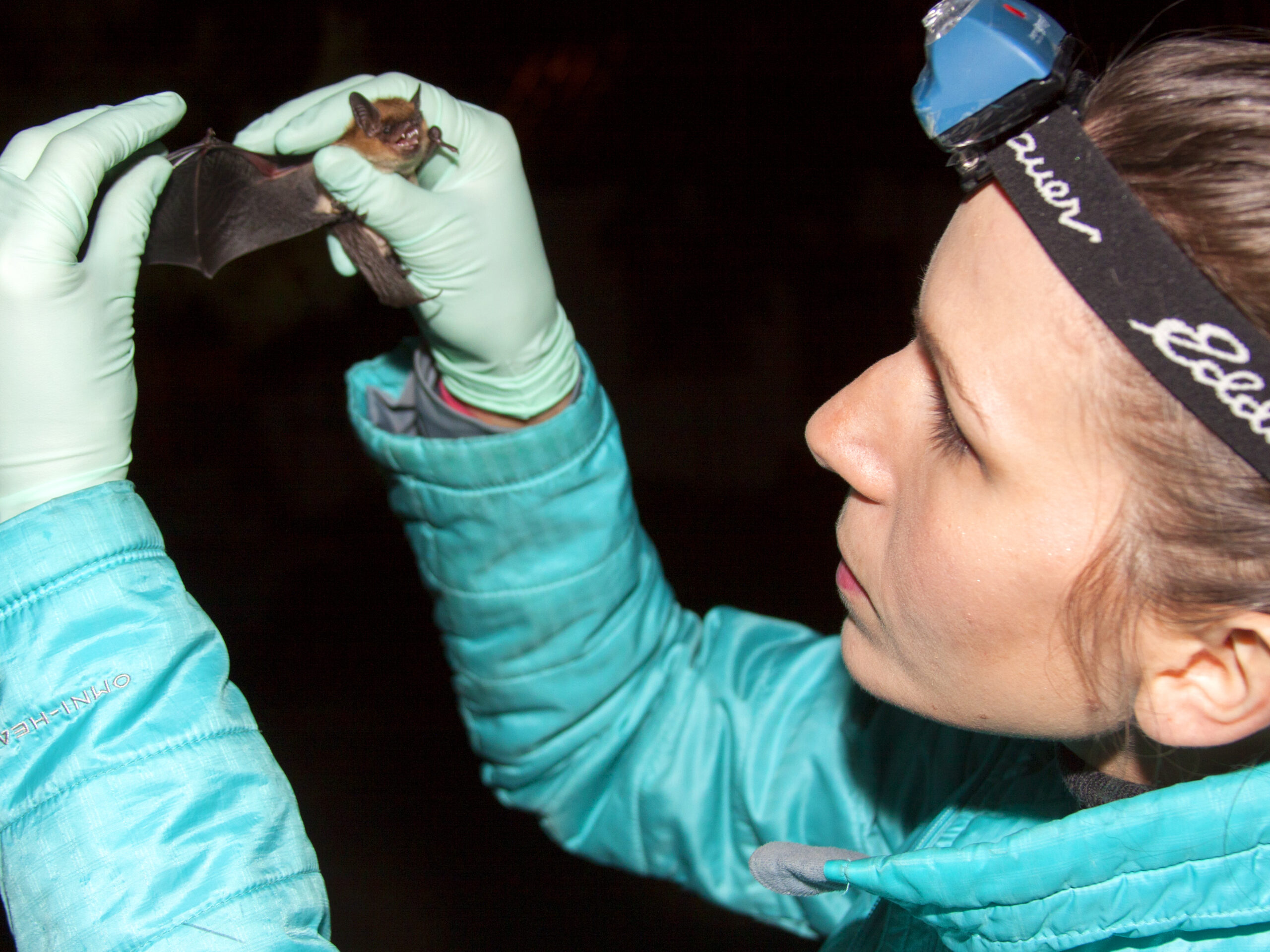 U-M doctoral student Giorgia Auteri inspects the wing of a healthy big brown bat, one of the species known to be affected by white-nose syndrome. Image credit: Heather Adams

U-M researchers collected tissue samples from wild little brown bats that survived the disease, as well as individuals killed by the fungal pathogen. They compared the genetic makeup of the two groups and found differences in genes associated with regulating arousal from hibernation, the breakdown of fats and echolocation.

“Because we found differences in genes associated with regulating hibernation and breakdown of fats, it could be that bats that are genetically predisposed to be a little bit fatter or to sleep more deeply are less susceptible to the disease,” said U-M’s Giorgia Auteri, first author of a paper scheduled for publication Feb. 20 in the journal Scientific Reports.

“Changes at these genes are suggestive of evolutionary adaptation, given that white-nose syndrome causes bats to arouse with unusual frequency from winter hibernation, contributing to premature depletion of fat reserves,” said Auteri, a doctoral student in the Department of Ecology and Evolutionary Biology who conducted the study for her dissertation.

The other author of the Scientific Reports paper is U-M biologist Lacey Knowles, Auteri’s faculty adviser. 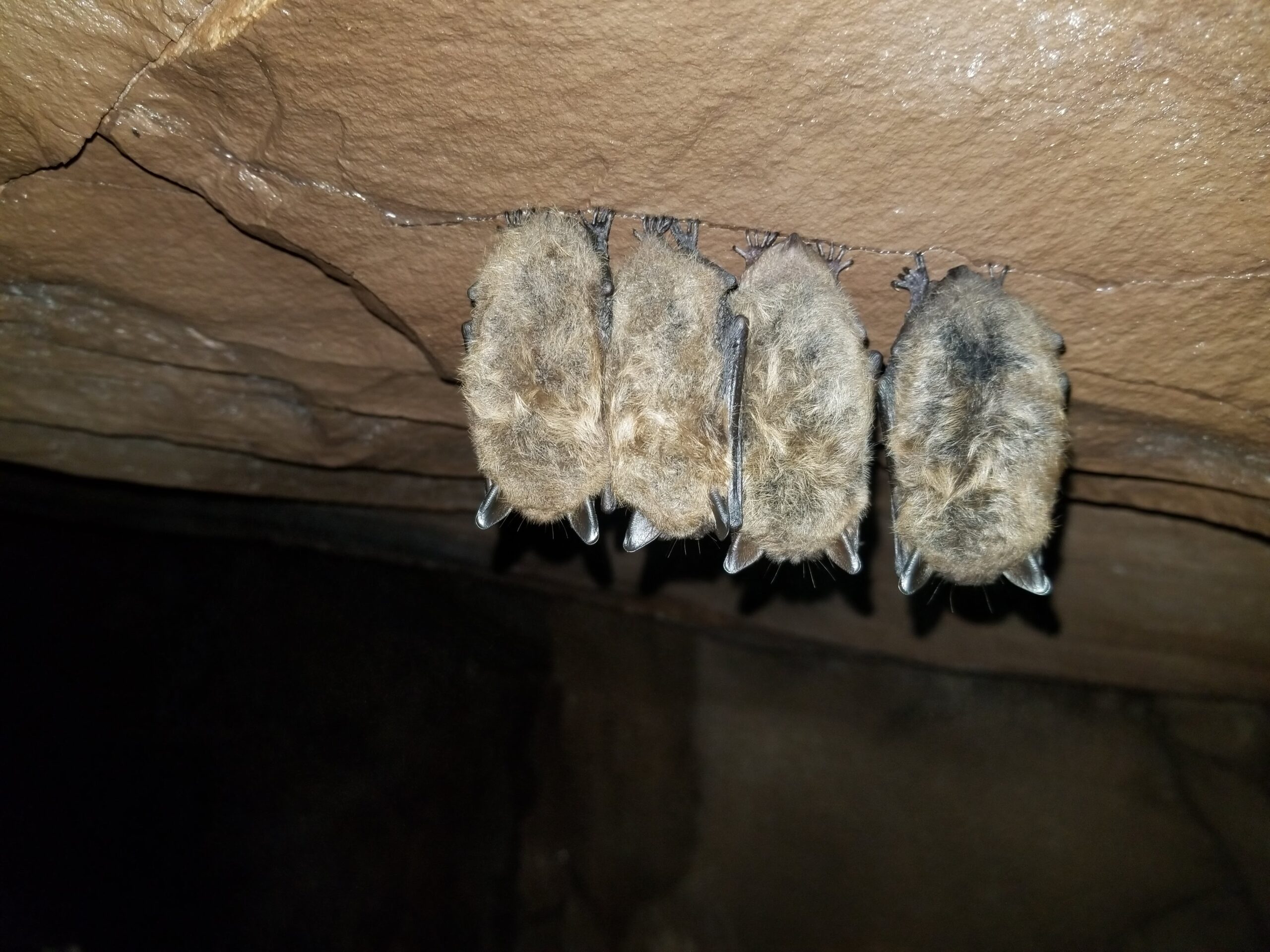 While the study was small—involving tissue samples from 25 little brown bats killed by white-nose syndrome and nine bats that survived the disease—the authors say their sample size is large enough to detect genetic changes driven by natural selection. A larger follow-up study is underway, expanding both the number of bats and the areas affected by the disease, to develop a fuller picture of adaptive change that may be key to the species’ survival.

The fungal pathogen that causes white-nose syndrome was inadvertently introduced in the northeastern United States in 2006 and is currently spreading across the continent.

Thirteen species of North American bats are currently affected, with some populations experiencing losses of 90-100%. The disease is named for a distinctive fungal growth around the muzzles and on the wings of hibernating bats. 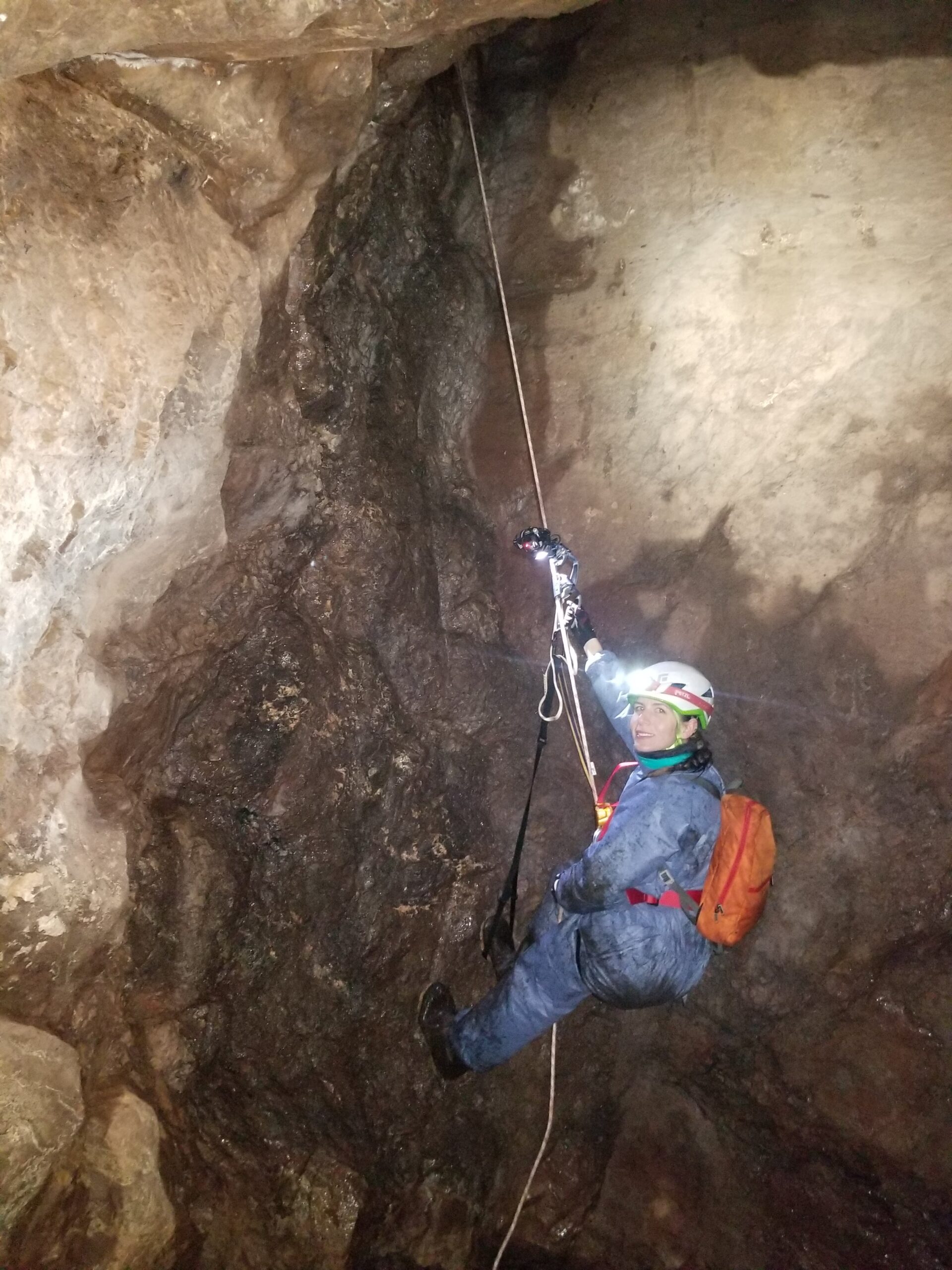 The U-M team’s study area is Michigan’s northern Lower Peninsula and Upper Peninsula. White-nose syndrome fungus was first detected there in 2014, and its arrival allowed the researchers to study the pathogen’s initial evolutionary impact.

For the study, the U-M researchers collected tissue samples from dead little brown bats found in or near hibernation sites during the winter. The hibernation sites were concentrated in the western Upper Peninsula and primarily consisted of abandoned iron and copper mines.

During the summer, they also collected small tissue samples from survivors that emerged successfully from hibernation despite exposure to the disease. Surviving bats had healing wing lesions or scars from the fungus.

In the laboratory, DNA was extracted from the tissues and sequenced, and the sequences were mapped to a previously generated reference genome for the species. A genome scan was conducted to test for evidence of evolutionary changes in response to white-nose syndrome.

The researchers found significant differences in three genes associated with arousal from hibernation (GABARB1), breakdown of fats (cGMP-PK1) and echolocation (FOXP2), as well as a fourth gene (PLA2G7) that regulates the release of histamines from mast cells.

“The function of one gene we identified hints that summer activities such as hunting via echolocation may be an important determinant of which individuals survive the winter infection period,” Auteri said. “This suggests that conservation of summer foraging habitat—not just winter hibernation sites—may promote population recovery in bats affected by white-nose syndrome.” 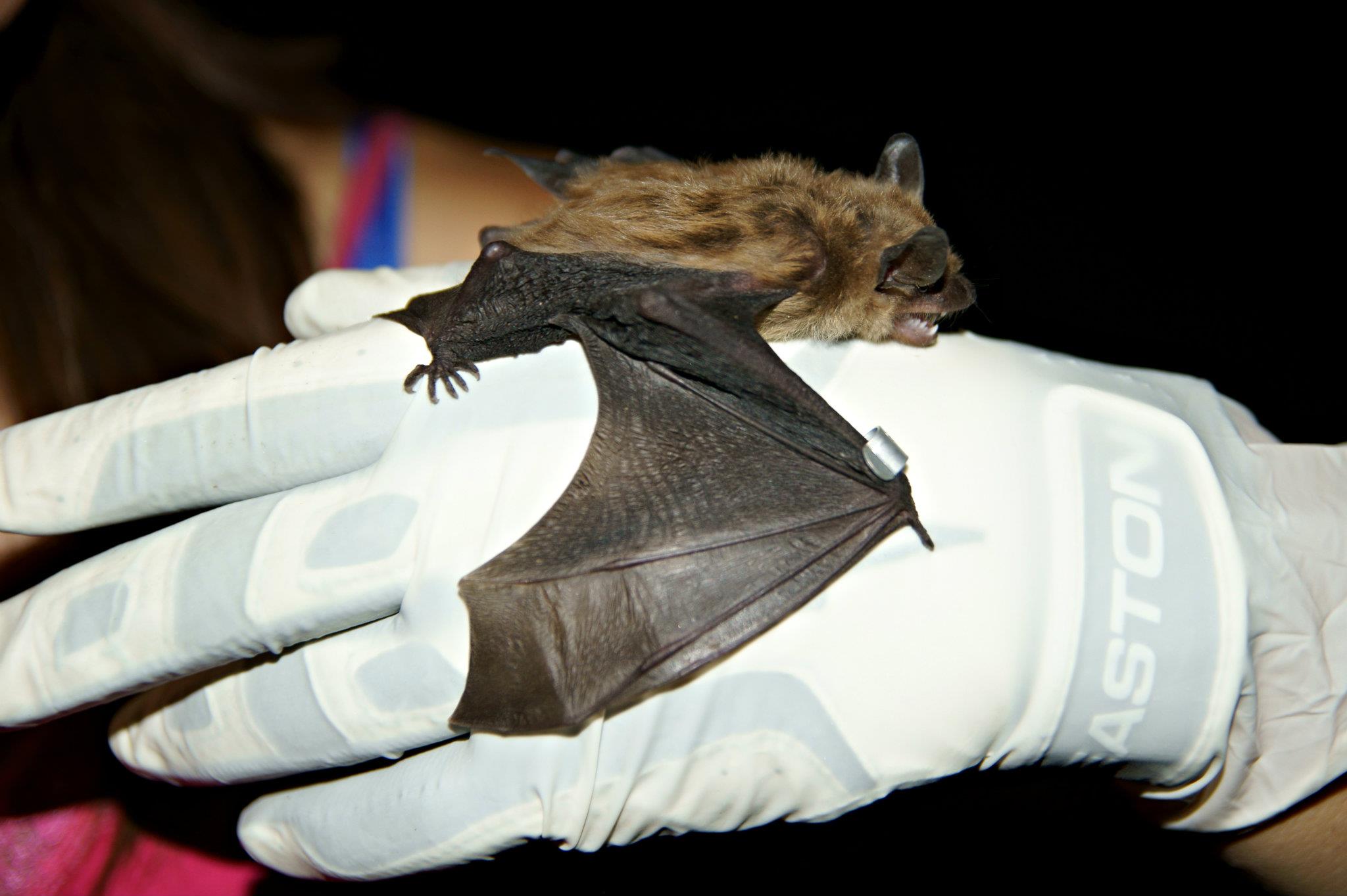 A healthy big brown bat, one of the species known to be affected by white-nose syndrome. Image credit: Amy Gondran

The observed genetic differences are suggestive of very rapid—though not unprecedented—evolutionary adaptation driven by natural selection, according to Auteri and Knowles.

“This apparent adaptation occurred very quickly, involves genes with a variety of functions which likely act across seasons in order to contribute to survivorship, and has taken place despite an observable reduction in genetic diversity associated with population declines,” said Knowles, a professor in the Department of Ecology and Evolutionary Biology and a curator at the U-M Museum of Zoology.

Auteri and Knowles said it’s too soon to say how the evolutionary changes they uncovered are likely to affect the little brown bat’s prospects. After all, these bats have suffered dramatic population declines, and low population sizes inherently make a species more vulnerable to further perturbations.

“But we’re finding the hint that there could be these genetic changes that are occurring that might provide some type of survival in the future,” Knowles said. “So as these variants increase, there’s some hope that these bats are not all going to die from the disease itself.” 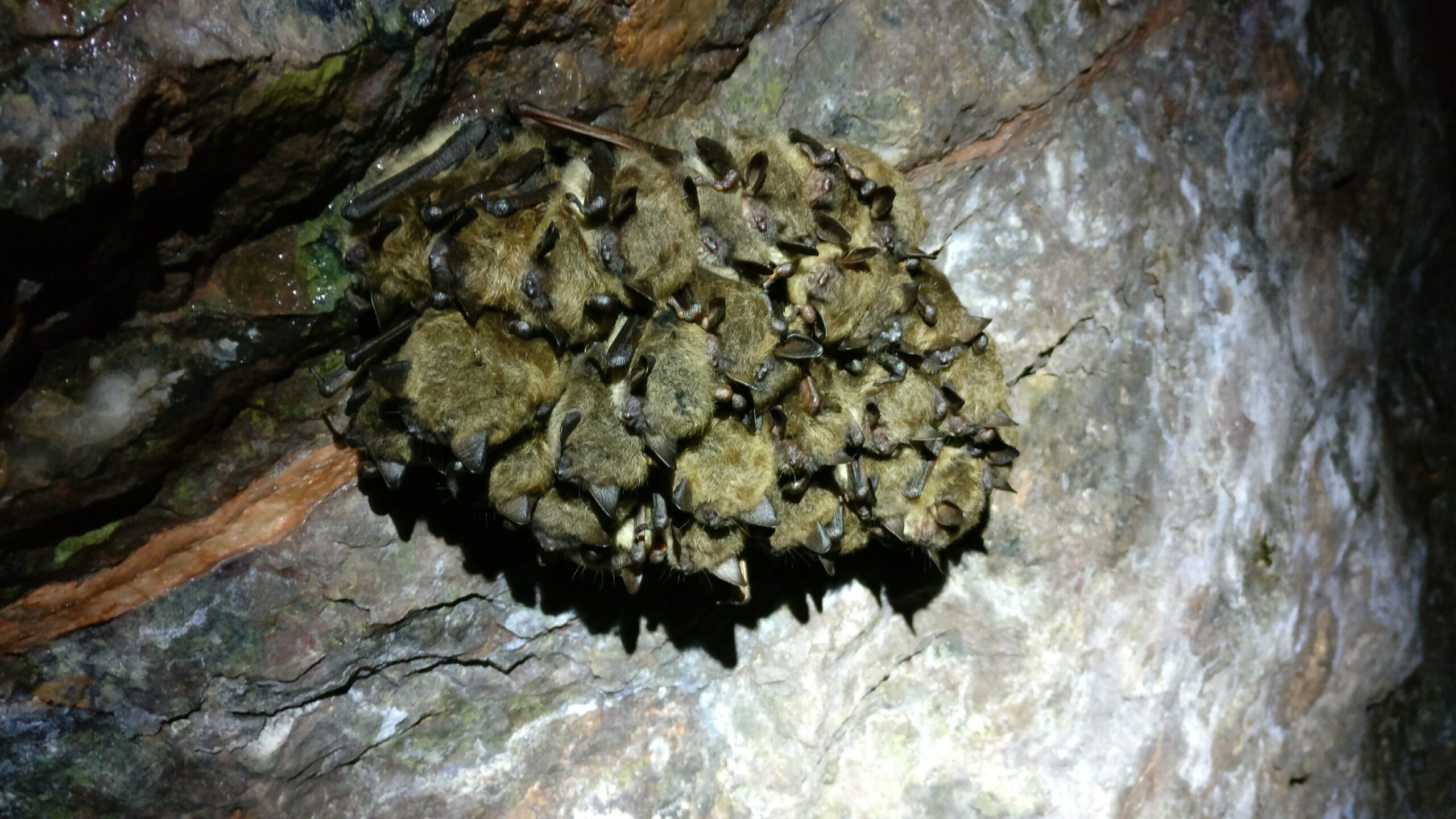 A group of hibernating little brown bats in an abandoned copper mine in Michigan’s Upper Peninsula. Image credit: Giorgia Auteri

Because little brown bats only have one pup per year, recovery of the species would likely take a long time, according to Auteri and Knowles.

Due to population losses, little brown bats have been listed as endangered by the International Union for Conservation of Nature and by the federal government of Canada, with a similar decision by the U.S. government pending.

Funding for the study was provided by the U-M Department of Ecology and Evolutionary Biology. The U-M Museum of Zoology also supported the project through financial contributions to make the research open-access, and by housing bats found dead from white-nose syndrome that were collected for the study. As permanent specimens stored in the collection, these bats may contribute to future studies.

The researchers complied with all relevant ethical regulations and guidelines for this work, including IACUC protocol PRO00008524, approved by the University of Michigan Institutional Animal Care and Use Committee.