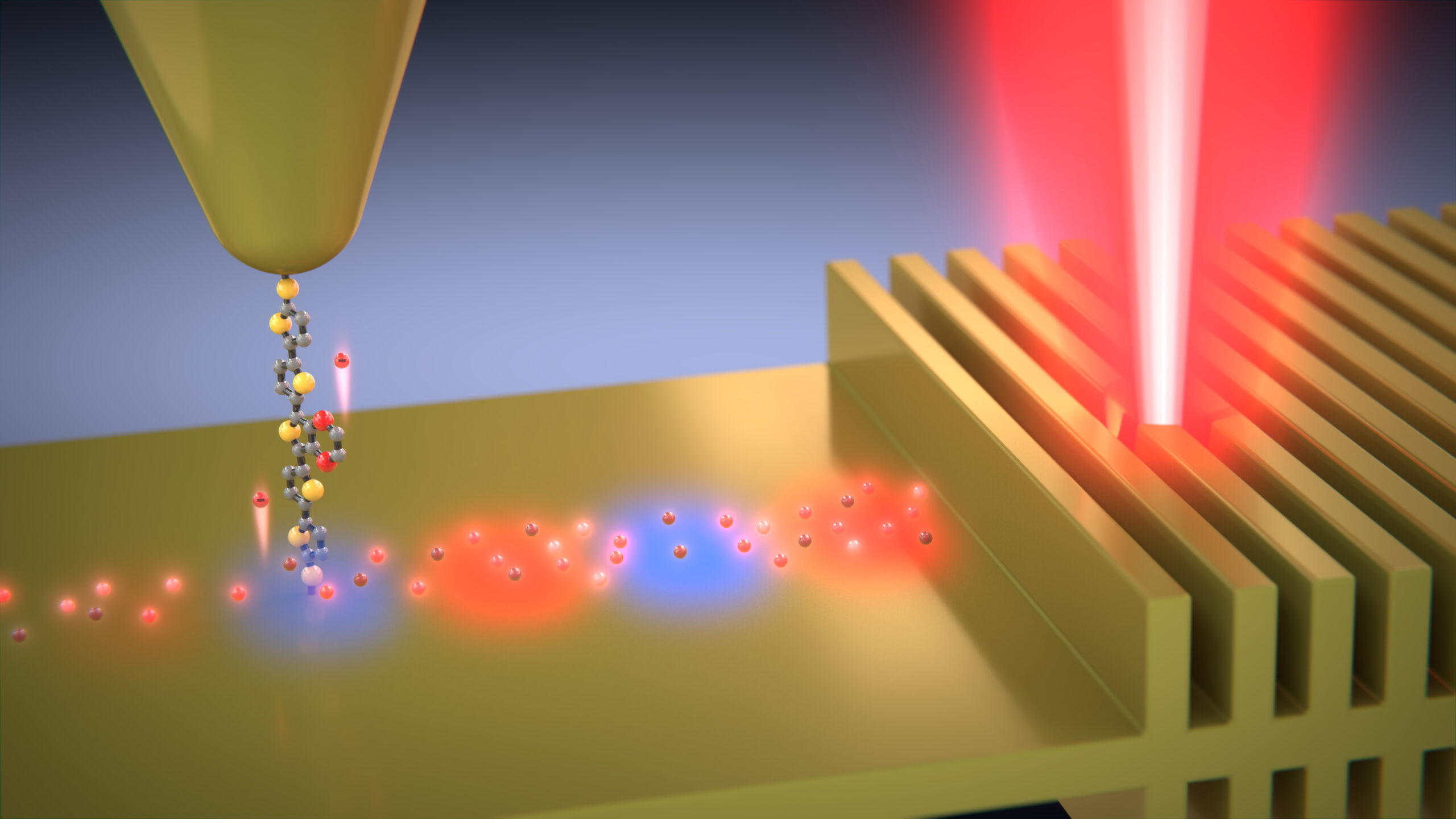 Hot electrons travel along the molecule into the probe tip. The molecule only allows electrons within a narrow range of energies to pass. Image credit: Enrique Shagun, Scixel.

ANN ARBOR—To answer a question crucial to technologies such as energy conversion, a team of researchers at the University of Michigan, Purdue University and the University of Liverpool in the U.K. have figured out a way to measure how many “hot charge carriers”—for example, electrons with extra energy—are present in a metal nanostructure. 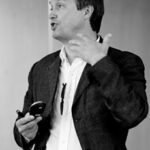 “For example, if you wanted to employ light to split water into hydrogen and oxygen, you can use hot charge carriers because electrons that are more energetic can more readily participate in the reaction and drive the reaction faster. That’s one possible use for hot carriers in energy conversion or storage applications,” said Edgar Meyhofer, a professor of mechanical engineering at U-M, who co-led the research.

Vladimir Shalaev, a professor of electrical and computer engineering, led the contribution from Purdue. The findings also confirm that thinner metals are more efficient at using light for generating hot charge carriers. Light can drive the motion of electrons on the surfaces of materials such as gold and silver, creating waves known as surface plasmons. These waves, in turn, can generate hot charge carriers.

The researchers compared the usual distribution of charge carrier energies to air at room temperature: The molecules in air do not all have the same energy—their average energy is reflected by the temperature. The energies of negatively-charged electrons and positively-charged holes ordinarily follow similar distributions within a material. But in materials that support surface plasmons, light can be used to give extra energy to some charge carriers as though the material were much hotter—more than 2,000 degrees Fahrenheit.

The team created the hot charge carriers by shining laser light onto a gold film just 13 nanometers thick, or hundred or so gold atoms thick, with tiny ridges spaced so that they would resonate with the laser light and generate the surface plasmon waves. Then they measured the energies of the charge carriers by drawing them through gatekeeper molecules into a gold electrode—the tip of a scanning tunneling microscope. 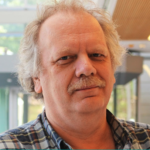 “Electrons can be thought of as cars running at different speeds on a highway. The molecule acts like an operator—it only allows cars travelling at a certain speed to pass through,” said Kun Wang, a postdoctoral fellow in Meyhofer’s group.

The researchers also compare it to a prism that separates the spectrum of electron energies rather than the colors in light.

Wang spent more than 18 months working with Harsha Reddy, a Ph.D. student in electrical and computer engineering at Purdue, on how to make this idea work.

“This idea of molecular filters was something no one else in the field has realized in the past,” said Reddy, who works in Shalaev’s lab.

Once they had developed a successful method, Wang and Reddy repeated the experiments with a second gold structure, this one about 6 nanometers thick. This structure generated hot charge carriers more efficiently than the 13 nanometer version.

“This multidisciplinary basic research effort sheds light on a unique way to measure the energy of charge carriers. These results are expected to play a crucial role in developing future applications in energy conversion and photocatalysis and photodetectors, for instance, that are of great interest to the Department of Defense,” said Chakrapani Varanasi, program manager of the team’s Multidisciplinary University Research Initiative funded by the Army Research Office.

With the method now demonstrated, the team believes that others can use it to explore and optimize nanostructures. This is important in applications such as converting sunlight to chemical energy because the number of hot charge carriers affects how well a catalyst can direct light energy toward a chemical reaction.

The study is published in the journal Science. Additional funding came from the Department of Energy and the Office of Naval Research. Seed funding from the U-M Department of Mechanical Engineering supported complementary calculations.