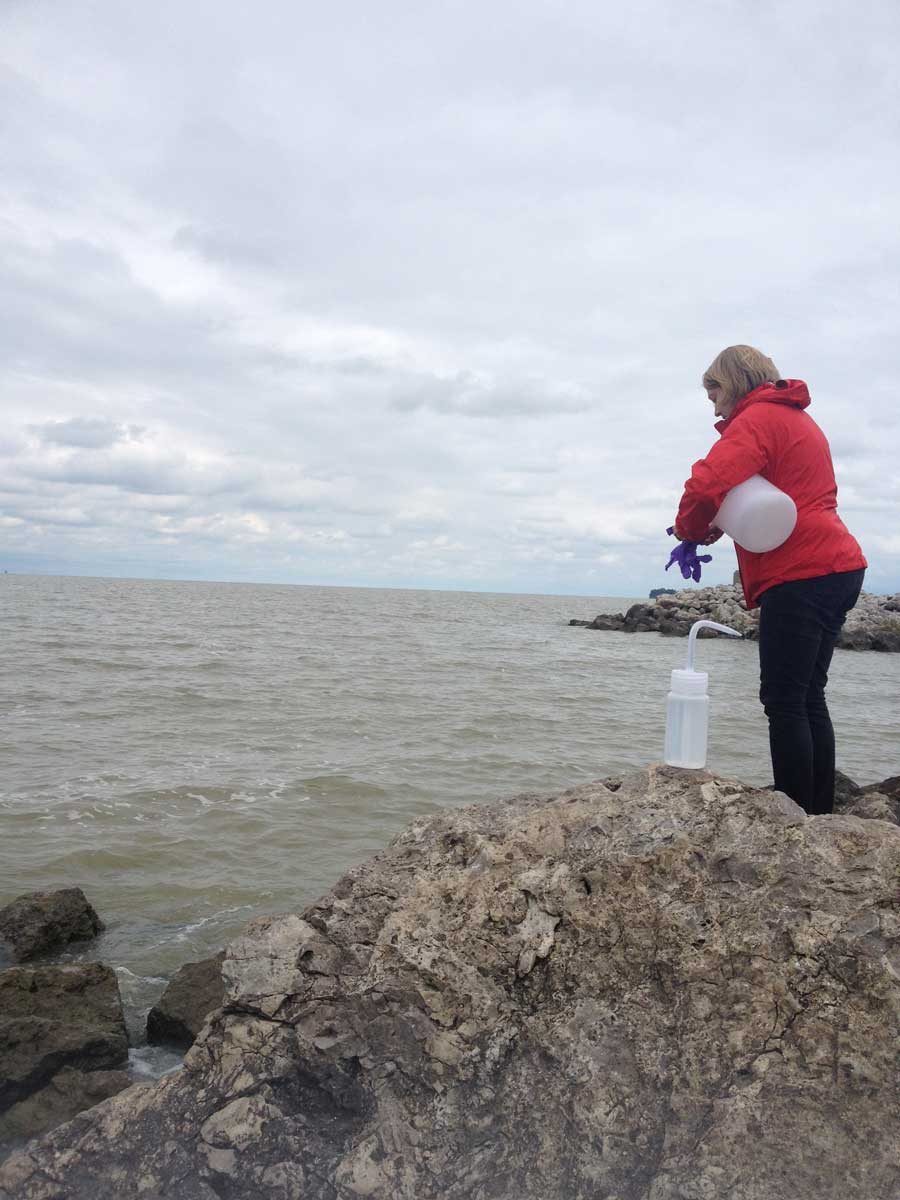 Jessica Axson prepares to collect a freshwater sample from Lake Erie at Maumee Bay State Park in Ohio. The cloudy green tint in the water is due in part to the high concentration of blue-green algae—84 parts per billion—that has caused large harmful algal blooms in the western basin of Lake Erie. Image credit: Nathaniel May

ANN ARBOR—Waves lapping against the shoreline is always a pretty scene, but it may also be a way for toxins from harmful algal blooms to become airborne.

Harmful algal blooms—blooms composed of blue-green algae—crop up throughout the Great Lakes region during hot summers. Algae reproduces, unchecked, producing toxins and sapping oxygen from water. These blooms occur naturally, but agricultural run-off provides nutrients for the algae to thrive.

This is the case in Lake Erie, where agricultural runoff contributes to massive annual blue-green algal blooms. A bloom in 2014 caused Toledo to shut down the city’s drinking water supply from the lake for three days. According to the Environmental Protection Agency, toxins produced by the algae can cause rashes, liver illness, vomiting, diarrhea, neurological effects, respiratory problems and even death.

Now, University of Michigan researchers Andrew Ault and Kerri Pratt are wondering whether toxins from these kinds of algal blooms can be transmitted by air when waves break against the shoreline. 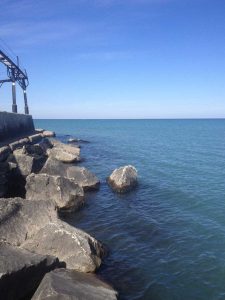 “These tiny aerosol particles, similar to those produced from an aerosol spray can, are about one hundred times smaller than a human hair,” said Kerri Pratt, assistant professor of chemistry and earth and environmental sciences in the College of Literature, Science, and the Arts.

Ault and Pratt have established the first answer to that question. Their study published in Environmental Science & Technology shows that biological material from algal blooms can become ejected into the air.

“Harmful algal blooms have been expanding as an important issue we’re dealing with, particularly for the Great Lakes,” said Ault, assistant professor of chemistry and environmental health sciences in the School of Public Health. “We’ve realized that not only are these important for water quality issues, but that you also generate atmospheric pollutants from these harmful algal blooms. We’re the first to show that wave-breaking of these blooms can release material into the atmosphere, which can have impacts on people breathing it in.”

In 2014, Pratt’s and Ault’s research teams, funded by the U-M Water Center, began taking water samples from Lake Erie and Lake Michigan. In September, they sampled Lake Erie water in the Maumee Bay near Oregon, Ohio, and in Catawba Island State Park near Port Clinton, Ohio. In October 2014, they sampled water from Lake Michigan near Michigan City, Ind.

Next, lead graduate student Nathaniel May recreated wave action in the lab using their lake spray aerosol generator. Taking air samples from the generator, the researchers were able to show that biological material from harmful algal blooms did become aerosolized.

“We found that when we had higher blue-green algae concentrations in water, we saw more aerosol particles that contained markers of biological content,” Pratt said.

Ault’s and Pratt’s research has shown that particles of this size can be carried hundreds to thousands of miles by air, and wind speeds as little as 7 miles per hour can create lake spray aerosols.

“Our hypothesis is that toxins from this blue-green algae might be getting into the air, in which case, people might be subjected to inhalation exposure, serving as a previously unrecognized health risk beyond drinking water contamination,” Pratt said.

Next, Ault plans to test specifically for toxins in the aerosols and how far they can be transported inland from the lakes.