For better or worse: Michigan communities after the recession 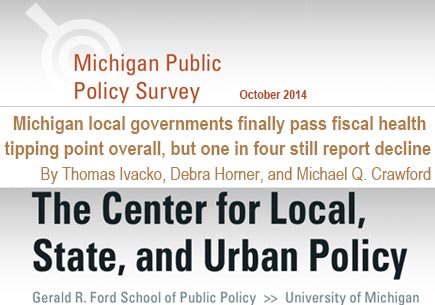 ANN ARBOR—For the first time in six years, more Michigan communities report that they are better able to meet their fiscal needs this year than those who say they are less able to do so.

A University of Michigan survey polled top elected and appointed officials in the state’s 1,856 units of government and found that 2014 marked a tipping point for them with 36 percent better able to meet financial needs and 24 percent less able to do so.

“Local government fiscal health was in a tailspin at the end of the Great Recession and it got even worse in 2010,” said Thomas Ivacko, administrator and program manager of the Ford School’s Center for Local, State, and Urban Policy. “But in 2011, the trend of gradual fiscal improvement began and has continued for a fourth year now.”

Still, many communities continue to struggle with shrunken property tax revenue, cuts in state and federal aid and a rise in tax delinquencies and home foreclosures. The 24 percent of jurisdictions in financial decline represents 443 struggling local governments across the state.

The poll, part of the Michigan Public Policy Survey series at CLOSUP reports:

The study, conducted April 8 to June 10, 2014, involved surveys sent via hardcopy and the Internet to top elected and appointed officials in all counties, cities, villages and townships in Michigan. A total of 1,344 jurisdictions returned valid surveys, resulting in a 72-percent response rate. The survey had a margin of error of 1.4 percentage points.