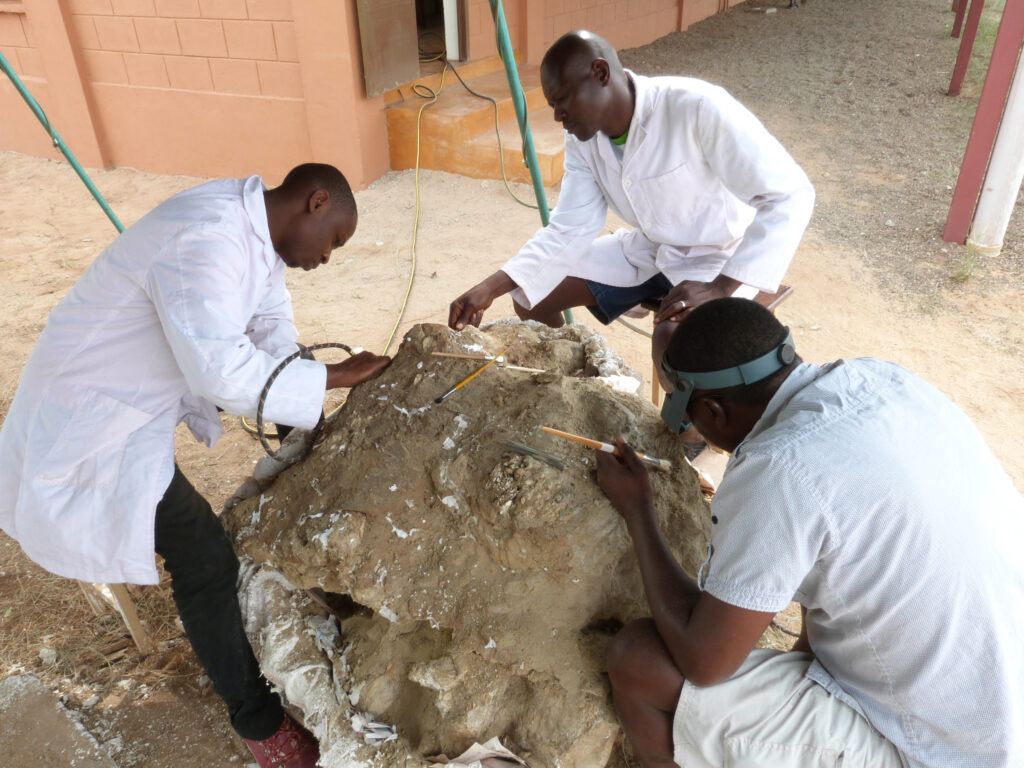 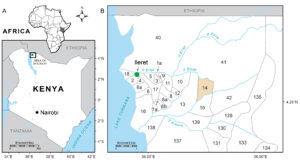 Map of the geographic position of Ileret Kenya and locality Area 14. A.) Map of the area of interest for the recovery of elephant cranium KNM-ER 63642 (Loxodonta adaurora), Ileret Region, northeast side of Lake Turkana. The green dot indicates the position of Ileret. B.) Detailed map of fossil localities in the Ileret Region. KNM-ER 63642 was recovered from Area 14 (highlighted). Image credit: Carol Abraczinskas, University of Michigan Museum of Paleontology

A remarkably well-preserved fossil elephant cranium from Kenya is helping scientists understand how its species became the dominant elephant in eastern Africa several million years ago, a time when a cooler, drier climate allowed grasslands to spread and when habitually bipedal human ancestors first appeared on the landscape.

Dated to 4.5 million years ago and recovered from a site on the northeast side of Lake Turkana, it is the only well-preserved elephant cranium—the portion of the skull that encloses the brain—from that time. It is about 85% intact and holds a wealth of previously unavailable anatomical detail, according to University of Michigan paleontologist William Sanders.

Known by its museum number, KNM-ER 63642, the roughly 2-ton cranium belonged to a massive adult male of the species Loxodonta adaurora, an extinct evolutionary cousin of modern African elephants but not a direct ancestor.

KNM-ER 63642 is both impressively immense and unexpectedly modern in aspect, displaying adaptations that likely gave L. adaurora an edge when competing with other large mammals for grasses, according to Sanders, lead author of a study published online Oct. 21 in the journal Palaeovertebrata. Co-authors include Meave and Louise Leakey, who led the recovery effort and who are best known for the discovery of early hominid specimens and artifacts from Lake Turkana and elsewhere.

The L. adaurora cranium is striking because it is raised and compressed from front to back, suggesting a novel alignment of chewing muscles well-suited for the efficient shearing of grasses. In addition, the animal’s molars are higher-crowned and had thicker coatings of cementum than other early elephants, making the teeth more resistant to the wear common in animals that feed on grasses close to the ground. 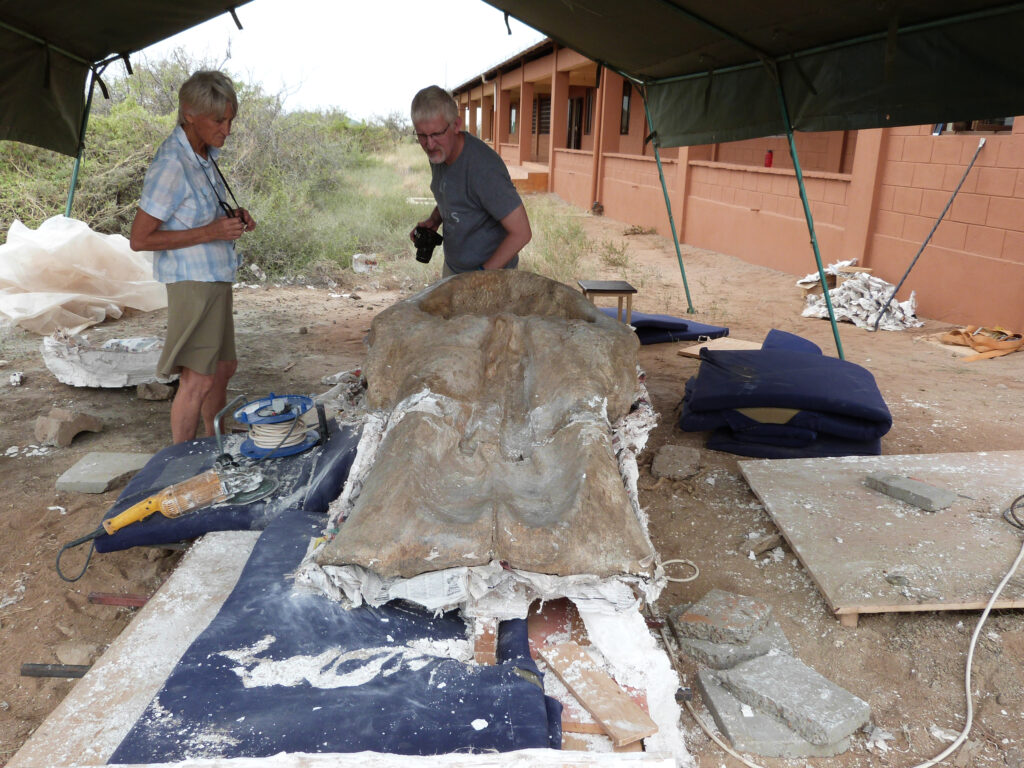 “The evident synchronization of morphological adaptations and feeding behavior revealed by this study of Loxodonta adaurora may explain why it became the dominant elephant species of the early Pliocene,” said Sanders, who has studied fossil elephants and their relatives for nearly 40 years in Africa and Arabia.

Eastern Africa was home to seven or eight known species of early elephants at the time, along with horses, antelope, rhinos, pigs and hippos. Many of these animals were becoming grazers and competing for the available grasses.

“The adaptations of L. adaurora put it at a great advantage over more primitive elephants, in that it could probably use less energy to chew more food and live longer to have more offspring,” said Sanders, associate research scientist at the U-M Museum of Paleontology and in the Department of Anthropology.

KNM-ER 63642 was discovered in 2013 by a member of the Koobi Fora Research Project from a single molar that was visible at the surface.

Excavation revealed the presence of a nearly complete cranium. The tusks and the jawbone were missing, and no other remains from that individual were recovered. The adult male is estimated to have been 30 to 34 years old at death. 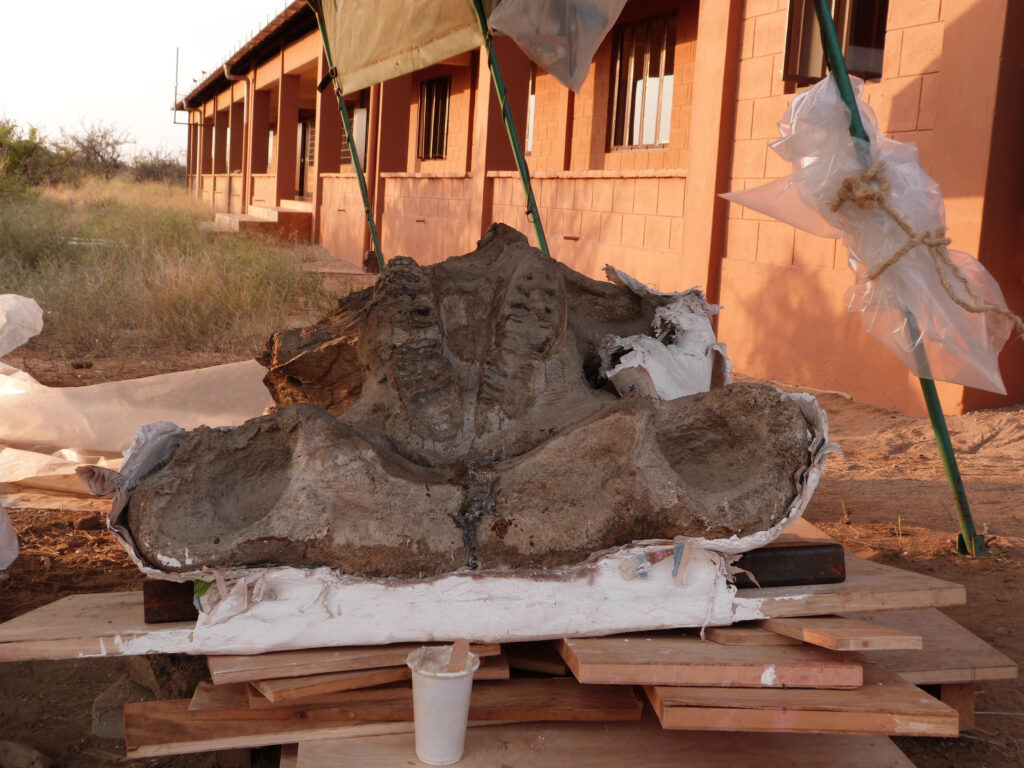 The fossilized cranium, together with the plaster jacket that protected it and some attached sediment, weighed about 2 tons. Based on a previous study of the skeleton from another L. adaurora adult male with a similar-sized skull, this individual likely weighed about 9 tons and probably stood about 12 feet at the shoulder—bigger than average male elephants of modern times. 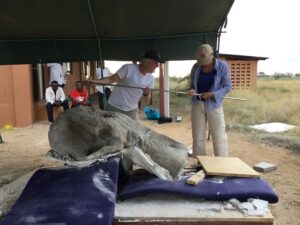 “In my opinion, this elephant skull is by far the most impressive specimen that we have in the Kenyan paleontological collection from Lake Turkana, both in its completeness and in its size,” said paleontologist and study co-author Louise Leakey of the Koobi Fora Research Project. “When the teeth were seen on the surface, we had no idea that a complete cranium would be uncovered, and the excavation and recovery operation was both challenging and exciting.”

KNM-ER 63642 is now permanently housed at the Turkana Basin Institute’s facility in Ileret, Kenya. It is the only well-preserved elephant cranium from the interval beginning with the origin of elephants 8 million years ago and ending 3.5 million years ago, according to Sanders.

In addition to providing a trove of insights about the anatomy of early elephants, the newly described cranium also deepens our understanding of the connections between those creatures and our earliest human ancestors, the habitually bipedal australopithecines.

Loxodonta adaurora and other early elephants coexisted with two well-known australopithecine species in eastern Africa: Australopithecus anamensis, recovered by Meave Leakey in and nearby the Lake Turkana Basin, Kenya, and A. afarensis, found at sites in Hadar, Ethiopia, and Laetoli, Tanzania. 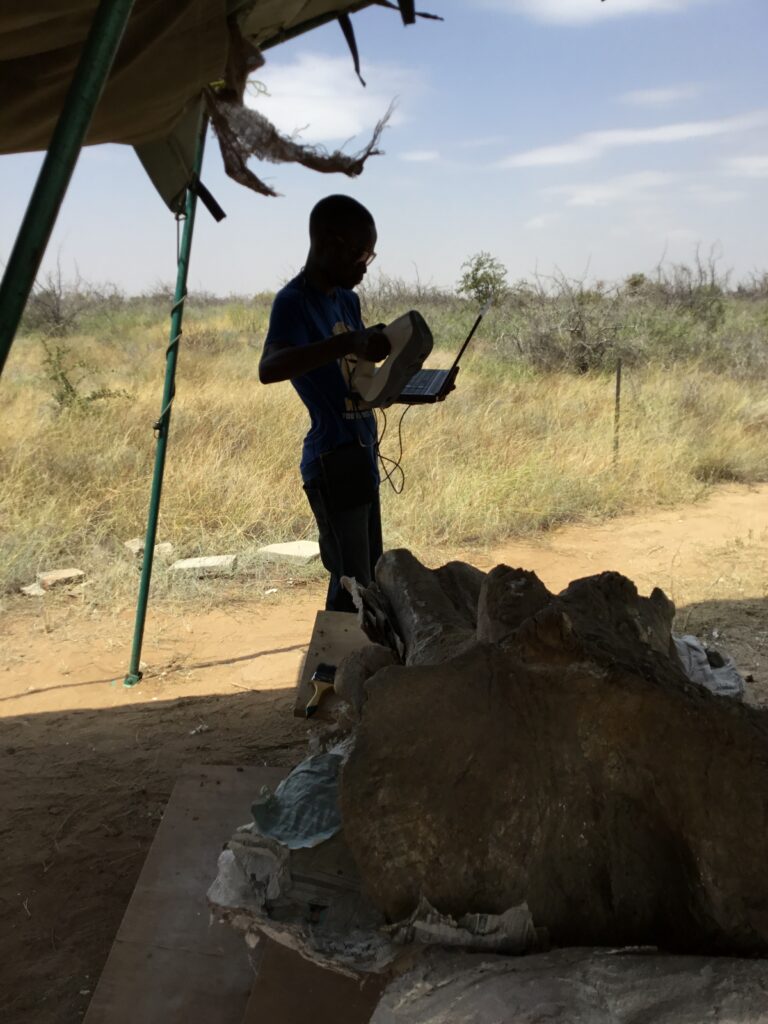 Underside of Loxodonta adaurora cranium KNM-ER 63642 being 3D scanned by Timothy Gichunge Ibui. Scanned images of both upper and lower aspects of the cranium were “stitched” together in a computer program to create a three-dimensional image, permitting the specimen to be comprehensively measured and studied as a single object. The cranium is too heavy to be observed on both sides simultaneously and could not have been adequately described without the creation of the 3D files. Image credit: Steve Jabo, Smithsonian Institution

In the early Pliocene, as grassy woodlands and grasslands spread across eastern Africa, the australopithecines would have benefited from the presence of elephants. The animals’ feeding activities helped keep grasses low to the ground, which would have allowed our upright ancestors to see over the vegetation and to watch for predators.

Elephants also disrupt closed woodlands and create open areas by knocking over trees, uprooting shrubs, and trampling paths through dense forest. And they spread nutrients and grass seed in their dung.

“The origins and early successes of our own biological family are tied to elephants,” Sanders said. “Their presence on the landscape created more open conditions that favored the activities and adaptations of our first bipedal hominin ancestors.

“From this perspective, it is ironically tragic that current human activities of encroaching land use, poaching and human-driven climate change are now threatening the extinction of the mammal lineage that helped us to begin our own evolutionary journey.”

The project was funded by the National Geographic Society; Meave and Louise Leakey are National Geographic Explorers at Large. Additional support was provided by ARTEC 3D, African Fossils and the Turkana Basin Institute. Funding for research travel and site visits by Sanders was provided by the Abu Dhabi Tourism and Culture Authority, Meave Leakey and the Turkana Basin Institute, and several Scott Turner Grants from the University of Michigan Department of Earth and Environmental Sciences.