Fragmented forests: Tree cover, urban sprawl both increased in Southeast Michigan over the past 30 years 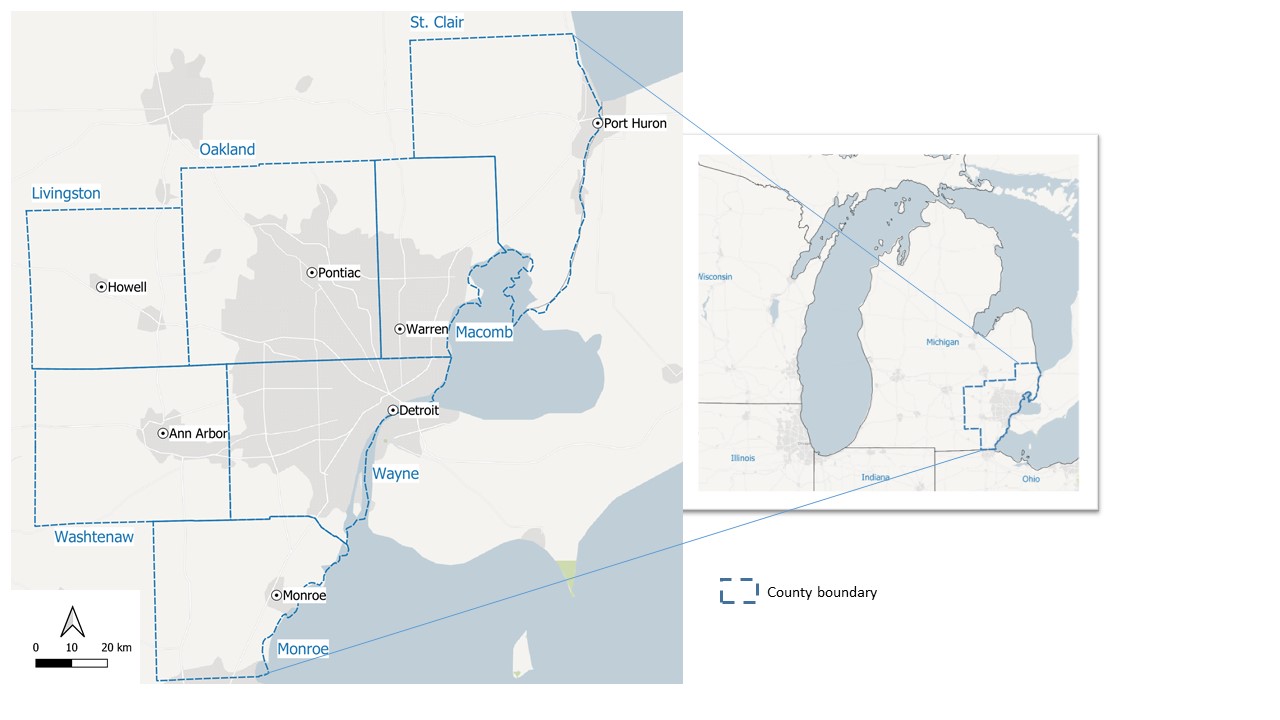 The extent of Southeast Michigan’s tree canopy and its urban sprawl both increased between 1985 and 2015, according to a new University of Michigan study that used aerial photos and satellite images to map individual buildings and small patches of street trees.

The researchers described the increase in forested area across the region as a positive finding. But their analysis also revealed that the region’s forested lands grew increasingly fragmented due mainly to increased urban sprawl, interfering with the ability of plants and animals to disperse across the landscape. 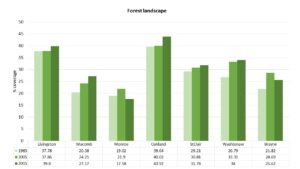 Change in the percentage of the land surface covered by trees, 1985-2015, for the seven Southeast Michigan counties included in the University of Michigan analysis of forested areas and urban sprawl. Image credit: Gounaridis et al. in Landscape Ecology, July 2020.

“We found that low-density single-family housing, in particular, had a detrimental effect on the functionality of adjacent forested landscapes,” he said. “And the distance to these built-up patches appears to be a factor in determining the magnitude of the impact.”

The study was published online July 22 in the journal Landscape Ecology. The other authors are Joshua Newell of the School for Environment and Sustainability and Robert Goodspeed of the A. Alfred Taubman College of Architecture and Urban Planning.

The study found that the region’s tree cover expanded by 246 square miles, or 1.8%, over the three decades, mainly due to the maturing of existing trees in older residential neighborhoods and on public lands.

At first glance, these results might seem paradoxical. How can you increase tree cover in a region while simultaneously constructing more roads and thousands of new buildings?

But most of the newly developed land came from former farmland, not from forested areas. The expansion of the tree canopy was attributed to the maturing of existing trees, along with new trees planted in residential neighborhoods and on public lands, as well as land-conservation efforts.

The vast majority of the new development involved the construction of low-density, single-family homes at the urban fringe of the Detroit metropolitan area—exactly the kind of sprawl that previous studies have shown to be most harmful to the healthy functioning of forested landscapes, according to the U-M researchers.

A second phase of the project, led by Goodspeed, will identify the most important areas for forest conservation and tree planting in Southeast Michigan, using a range of ecological and socioeconomic indicators. Those findings are expected to be submitted for publication later this year.

“Few studies have simultaneously examined sprawl at the building level and its relationship to forested landscapes within an urbanizing region,” Goodspeed said. “We expect our findings will prove useful to policymakers and planners seeking to prevent or mitigate habitat fragmentation caused by urban expansion.”

The researchers described the net increase in forested area across the region as “a positive finding, given that these trees provide habitat for many species as well as valuable ecosystem services for residents, such as improving air quality and mitigating the urban heat-island effect.”

However, their analysis also revealed that the region’s forested lands grew increasingly fragmented due mainly to urban sprawl, which the researchers defined as development composed primarily of low-density (one to four houses per acre) single-family housing. 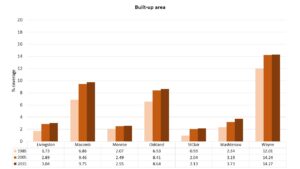 Change in the percentage of the land surface covered by buildings and roads, 1985-2015, for the seven Southeast Michigan counties included in the University of Michigan analysis of forested areas and urban sprawl. Image credit: Gounaridis et al. in Landscape Ecology, July 2020.

Increased fragmentation resulted in a loss of connectivity between forest patches, limiting the ability of plants and animals to disperse across the landscape by using linked forest patches as stepping stones.

The authors note that local decision makers can turn to a variety of land-use planning techniques, such as cluster subdivisions and smart growth, to protect habitats and minimize fragmentation.

“Smaller patches of forest and street trees are often excluded from analyses due to data limitations, overlooking the crucial role these trees play in providing ecological functions and enhancing connectivity,” said co-author Newell. “Our results point to the importance of using high-resolution data in landscape analysis.”

New residential development was most rapid, between 1985 and 2015, in Oakland, Macomb and Wayne counties. Oakland County, for example, added and estimated 42,000 new buildings during the study period. Seventy-three percent of them were single-family houses, and nearly half of those homes were classified as low density.

The largest increases in tree cover over the 30-year period were seen in Washtenaw (+7%), Macomb (+6.5%) and Oakland (+4.5%) counties. The city of Detroit, which lost significant population over the time period studied, also lost forest cover after 2005.

The seven-county study area (Livingston, Macomb, Monroe, Oakland, St. Clair, Washtenaw and Wayne) covers about 4,600 square miles. In addition to the city of Detroit and its suburbs, the region contains a large exurban area characterized by low-density residential development and agricultural land uses.

The U-M study was supported by the U.S. Department of Agriculture’s National Institute of Food and Agriculture and the National Science Foundation’s Sustainability Research Network program.