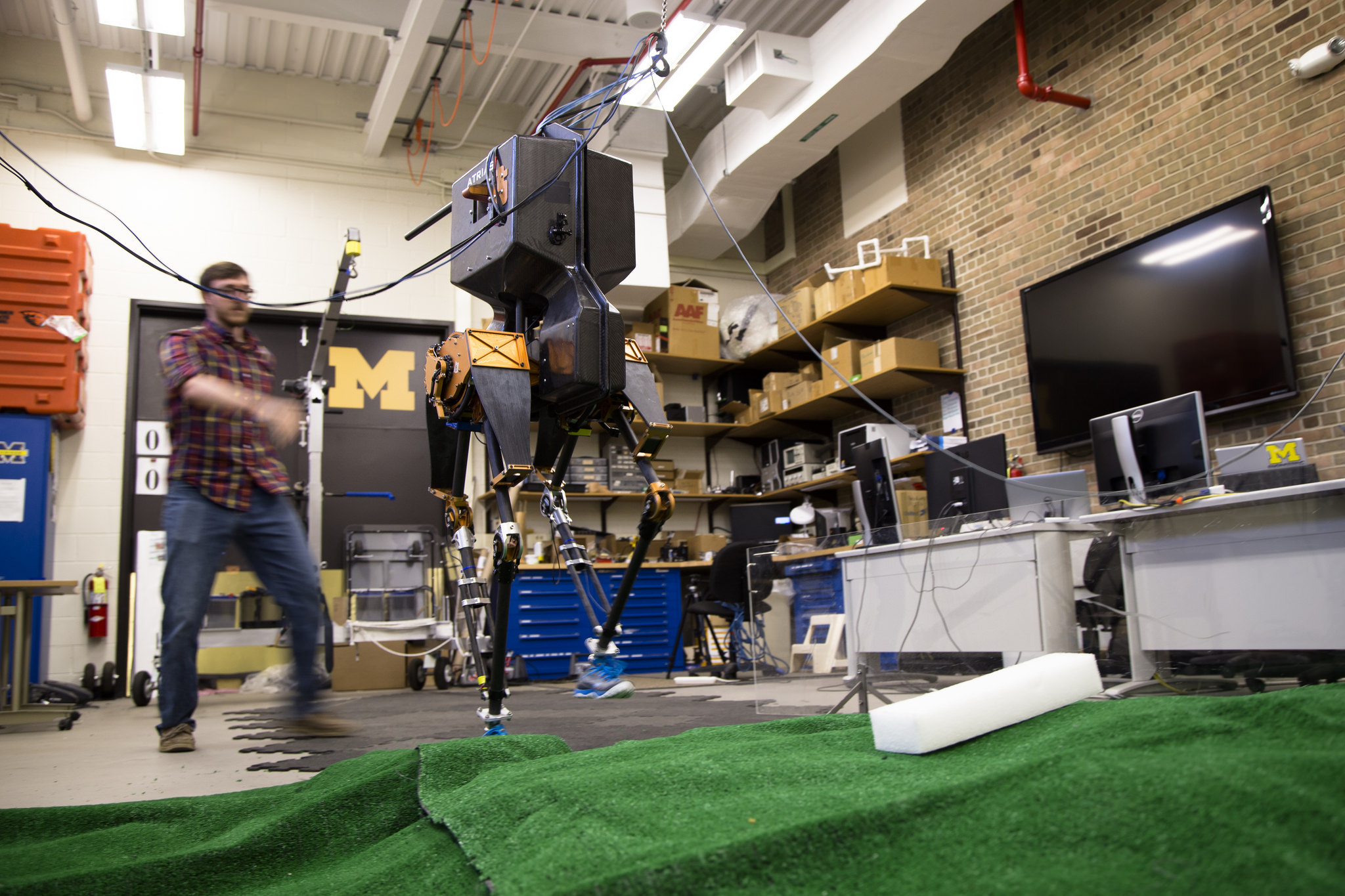 MARLO, the 3D bipedal robot that belongs to electrical engineering professor Jessy Grizzle and his team of students, is starting to really figure out this walking thing. Here, robotics PhD student Ross Hartley watches as MARLO demonstrate’s her ability to conquer tough terrain. Image credit: Evan Dougherty, Michigan EngineeringANN ARBOR—An unsupported bipedal robot at the University of Michigan can now walk down steep slopes, through a thin layer of snow, and over uneven and unstable ground.

The robot’s feedback control algorithms should be able to help other two-legged robots as well as powered prosthetic legs gain similar capabilities.

“The robot has no feeling in her tiny feet, but she senses the angles of her joints—for instance, her knee angles, hip angles and the rotation angle of her torso,” said Jessy Grizzle, professor of electrical engineering and computer science and of mechanical engineering. “It’s like walking blindfolded and on stilts.”

MARLO is Grizzle’s first robot that can walk (and fall) in any direction, known as 3D walking. With their previous robot, MABEL, Grizzle’s team produced leading control algorithms for robots that need to move in only two dimensions. MABEL was attached to a boom that gave her sideways stability.

“Getting a robot to walk well in 3D can be a very frustrating process,” said Xingye (Dennis) Da, a doctoral student in mechanical engineering.

Taking a hint from Grizzle’s long-time collaborator Jonathan Hurst at Oregon State University, who built MARLO, Da developed a way to control the robot with two 2D algorithms. This approach takes advantage of what the team learned by working with MABEL.

“The method could help many researchers speed up the process of achieving stable walking on their robots,” said Da, who designed this control algorithm.

The main controller handles the forward and backward motion and balance, while a second controller handles side-to-side balance. Da created a library of 15 gaits to handle different walking speeds and ground heights. Each gait is optimized for energy efficiency—making the movement as natural as possible—and respects the constraints of the robot.

Armed with this knowledge, MARLO steps blindly, sensing the changes in ground height and adjusting her gait according to terrain and speed. She blends gaits from the library to fit her environment.

Using an Xbox controller, Da can tell MARLO how quickly to walk and in what direction. But the rest is up to her. MARLO demonstrated this algorithm in tests walking through snow, down a steep hill, and on randomly stacked plywood squares covered in astroturf and scattered with more obstacles.

Although impressive, this approach has inherent limitations. It works as long as the robot doesn’t have to make quick turns or sideways movements, but to achieve true agility, the control algorithm must be more integrated.

Working toward this goal, Brent Griffin, a doctoral student in electrical engineering and computer science, is developing a fully 3D controller. While the control algorithm based on 2D robots can walk at different speeds, this controller has an optimal speed that it returns to. It can slow down and speed up as necessary to manage difficult terrain.

Through computer simulations, Griffin tests the 3D controller against a range of terrain and speed disturbances to ensure reliable walking in varying real-world conditions. MARLO demonstrated this control method by walking over plywood obstacles in the lab and for hundreds of steps outdoors on pavement. The researchers believe that MARLO’s gait using this algorithm is the most efficient yet for a bipedal robot.

“We are able to design full 3D walking gaits using a mathematical model of the robot and then apply them directly to MARLO,” Griffin said. “Because the implementation works without any robot-specific modifications, it is generalizable to other walking robots.”

Over the summer, the team plans to merge the two control algorithms into one “super-algorithm” that can support more agile movements.

MARLO exhibits the best walking ability that the team knows of for a robot that doesn’t have powered ankles, but Grizzle emphasizes that MARLO isn’t the point.

“The major product of our research is a recipe for legged locomotion,” said Grizzle, the Elmer G. Gilbert Distinguished University Professor of Engineering and the Jerry W. and Carol L. Levin Professor of Engineering. “We try to write it precisely and generally enough that others can use it, and they don’t have to call us up and say, ‘What’s the special sauce?'”

The codes that Grizzle’s team used to make MARLO walk on flat ground serve as the basis for algorithms developed in other labs for different kinds of robots. Robert Gregg, an assistant professor of mechanical engineering and bioengineering at the University of Texas-Dallas, adapted the algorithm to control a prosthetic lower leg. When an amputee tried out Gregg’s robotic leg on a treadmill, he was able to walk naturally. Gregg has seen the latest MARLO videos.

“The ability of MARLO to gracefully navigate uneven terrains is very exciting for my work in prosthetics,” Gregg said. “We hope to encode similar abilities into our robotic prosthetic leg so that lower-limb amputees can just as easily walk about the community without having to think about the terrain.”

This work was funded by the National Science Foundation.

In other recent MARLO videos, the robot walks down a steep slope, in the snow, on a long walk and in a u-turn.