From obscurity to dominance: Tracking the rapid evolutionary rise of ray-finned fish 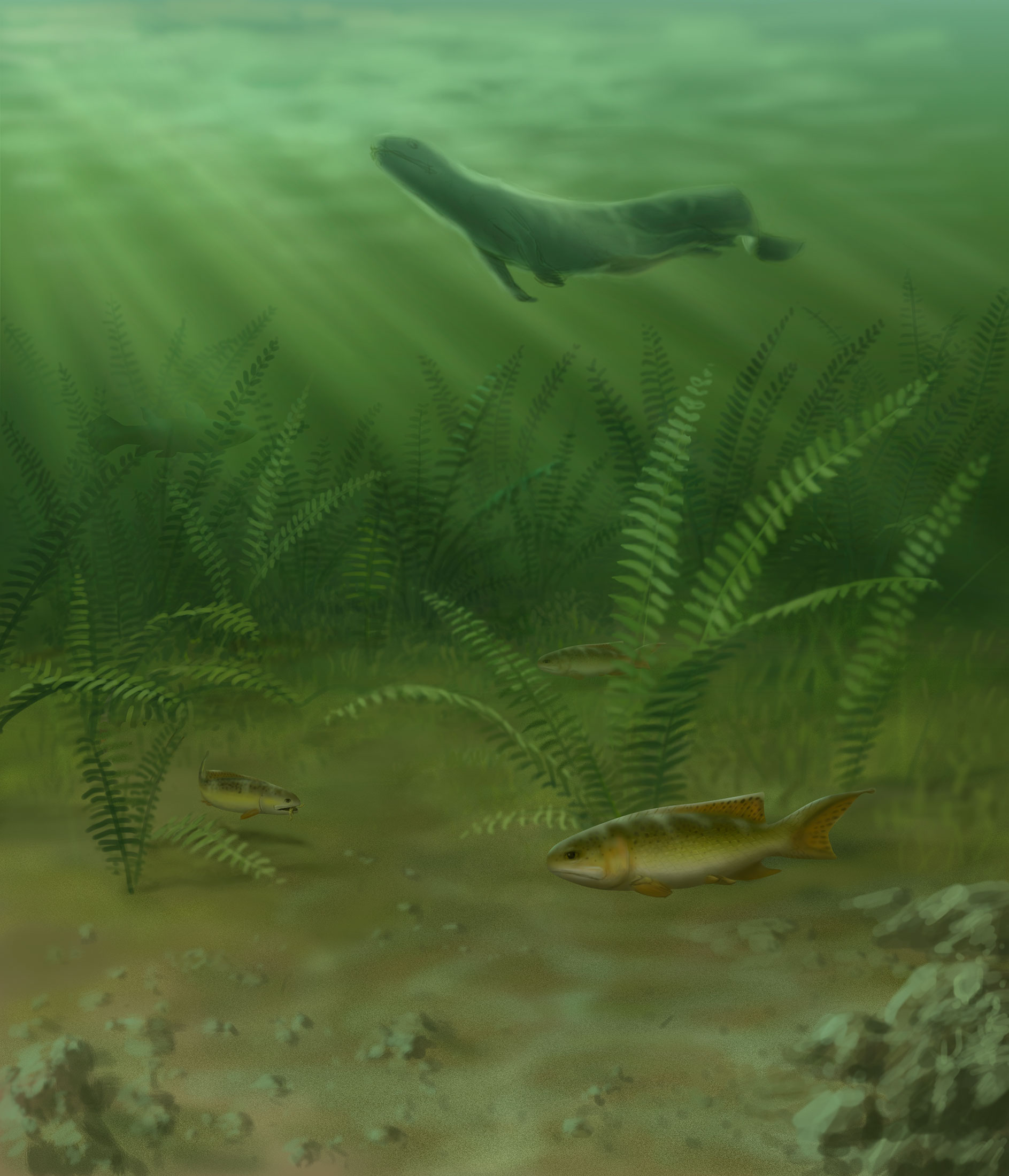 The first-known shell-crushing ray-finned fish, Fouldenia, is shown swimming along the bottom of a tropical freshwater floodplain about 348 million years ago. The Fouldenia fossils came from a site in Scotland that also produced the earliest-known post-extinction tetrapods, four-limbed creatures that later crawled ashore and evolved into amphibians, reptiles, birds and mammals. An early tetrapod is shown at the top of the image. Painting by John Megahan.ANN ARBOR—Mass extinctions, like lotteries, result in a multitude of losers and a few lucky winners. This is the story of one of the winners, a small, shell-crushing predatory fish called Fouldenia, which first appears in the fossil record a mere 11 million years after an extinction that wiped out more than 90 percent of the planet’s vertebrate species.

The extinction that ended the Devonian Era 359 million years ago created opportunities quickly exploited by a formerly rare and unremarkable group of fish that went on to become—in terms of the sheer number of species—the most successful vertebrates (backboned animals) on the planet today: the ray-finned fish.

A University of Michigan evolutionary biologist and a colleague have shown that the previously known but misclassified Fouldenia was the first recorded shell-crushing ray-finned fish. This long-extinct fish, and a handful of its relatives, demonstrate that in the immediate aftermath of the end-Devonian extinction, ray-finned fish had already acquired a diversity of forms that gave them an evolutionary edge, enabling them to fill the ecological vacuum left by the demise of most major fish groups.

“This event 359 million years ago is called the Hangenberg extinction, and it nearly wiped out vertebrate life, which at the time was limited to the water,” said Lauren Sallan, an assistant professor in the U-M Department of Ecology and Evolutionary Biology. “The ray-finned fish come to the fore after that event. They not only recover from this extinction, but they go from being a few minor lineages to dominating all the oceans.”

Sallan and Michael Coates of the University of Chicago also were able to identify juveniles of Fouldenia, a rare find that allowed them to show that the body shape of these fish changed dramatically as they developed. The relatives of Fouldenia, shell-crushers all, apparently took advantage of this developmental quirk to produce new forms. This diverse band of survivors spread worldwide and persisted for nearly 100 million years.

A study by Sallan and Coates was published online July 22 in the Zoological Journal of the Linnean Society.

“These early, post-Devonian ray-finned fish provide the first glimpse of what is to come: an evolutionary profusion of body forms, fin shapes, and extraordinary jaws and teeth. The ray-finned fish really do exemplify Darwin’s comment about ‘endless forms most beautiful and wonderful,'” Coates said.

There are around 30,000 species of ray-finned fish today, comprising nearly 99 percent of all fish species. Think of the word “fish” and the image that pops into your mind will likely be a ray-finned fish, members of a ubiquitous class that includes everything from tuna to trout, catfish to cod, swordfish to sunfish, perch to piranha, goldfish to goby.

After re-evaluating fossils from sites in Scotland dating to 348 million years ago, Sallan and Coates concluded that Fouldenia and its relative Styracopterus, which previous researchers had classified as the same species, are in fact separate genera. A genus is the category of biological classification between the family and the species. 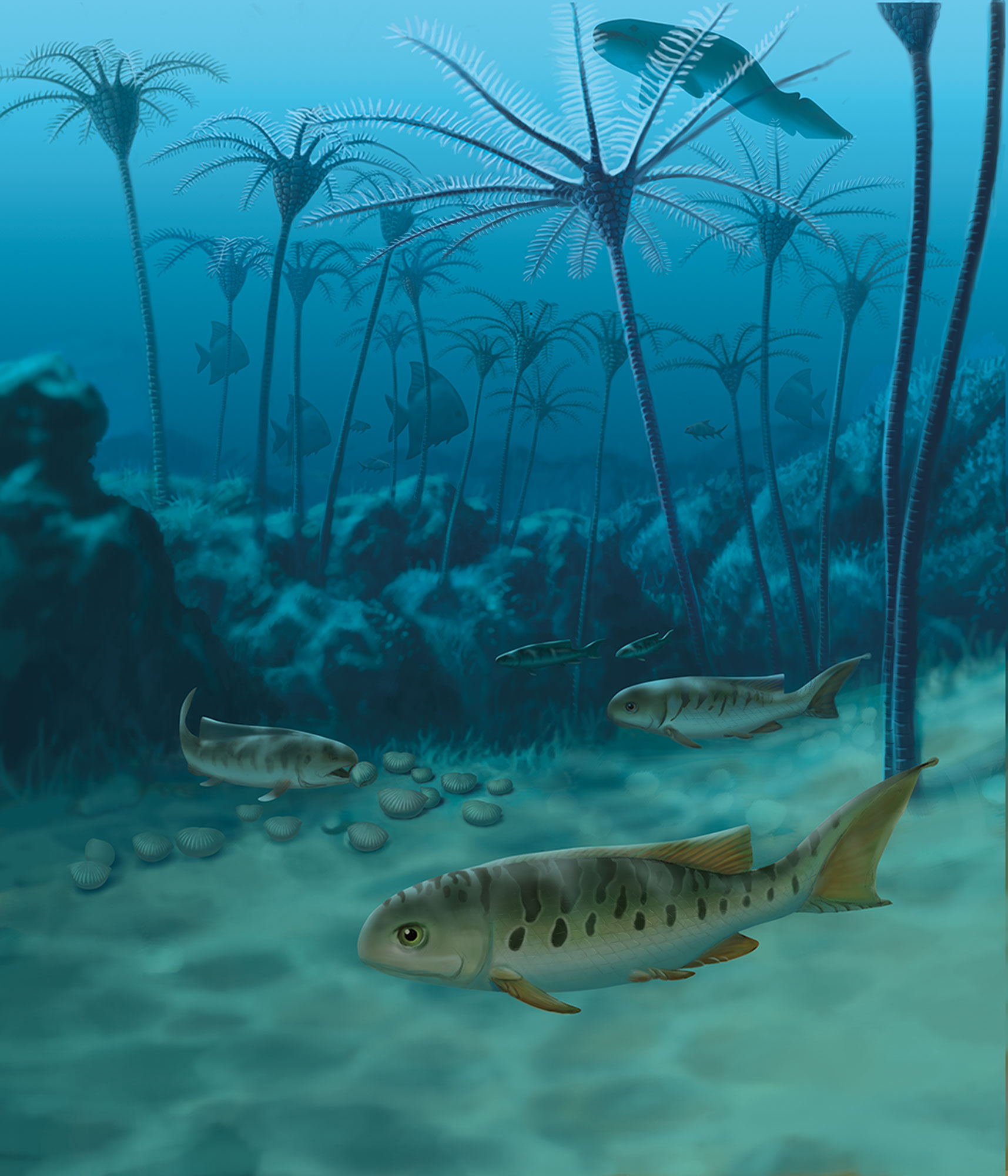 Styracopterus, a later relative of Fouldenia that appeared alongside a host of fish with new body forms about 338 million years ago, is shown at a near-shore reef not far from the site where the Fouldenia fossils were collected. Painting by John Megahan.Sallan and Coates determined that Fouldenia had massive tooth plates on its upper and lower jaws, suitable for preying on hard-shelled animals. It resembled modern-day jacks, which include the Japanese amberjack, or yellowtail, familiar to sushi lovers. Styracopterus was an early mimic of modern deep-bodied fish such as the angelfish. Both of these primeval fish were less than 10 inches long.

The same sites have also produced some of the earliest post-Devonian tetrapods, four-limbed creatures that included some of humanity’s earliest relatives, filling a post-extinction lull in their diversity known as Romer’s Gap.

New branches on the tree of life had sprouted, setting the stage for an explosive diversification of forms that evolutionary biologists call an adaptive radiation. These events often occur in response to new ecological opportunities—when habitats are unoccupied by competitors, for example. That’s what happened when a much later extinction killed off the dinosaurs and allowed mammals to take over those reptiles’ ecological roles.

Something similar happened to ray-finned fish, which have fins supported by long, bony rods arranged in a ray pattern. Before the extinction, fish were dominated by two groups: the armor-plated, predatory placoderms and the lobe-finned fish, whose fins are borne on a fleshy, scaly stalk extending from the body.

Placoderms were eliminated by the end-Devonian extinction, and most of the lobe-finned fish perished as well, though survivors live on today in the lungfish and the coelacanth. In addition to a few ray-finned fish, some sharks and tetrapods survived the Hangenberg event. Tetrapods later crawled ashore and evolved into amphibians, reptiles, birds and mammals.

Other survivors of the Hangenberg event included sea urchins, sea lilies and shelled invertebrates called brachiopods. With most other predators now out of the picture, early sharks and ray-finned fish like Fouldenia used their crushing jaws to dine on these spiny, stalked and hard-shelled creatures.

“Because the ecosystem’s been decimated, the only thing left to prey on are shelly animals,” Sallan said. “So in this vacuum left by the mass extinction event, a bunch of different animals are going into these vacated niches and taking over those jobs.”

The Hangenberg event was the final blow in a series of mass extinctions that ended the Devonian, which is often called the Age of Fish. The Hangenberg extinction is associated with a warming period when sea levels rose and the amount of oxygen in the water plummeted, followed by a cooling period that spread glaciers as far as the tropics.