As part of the festivities planned for the Nov. 28 football game between the University of Michigan and Penn State, the Michigan Marching Band is set to release their first virtual show during halftime at 1:30 p.m. ET. on YouTube. 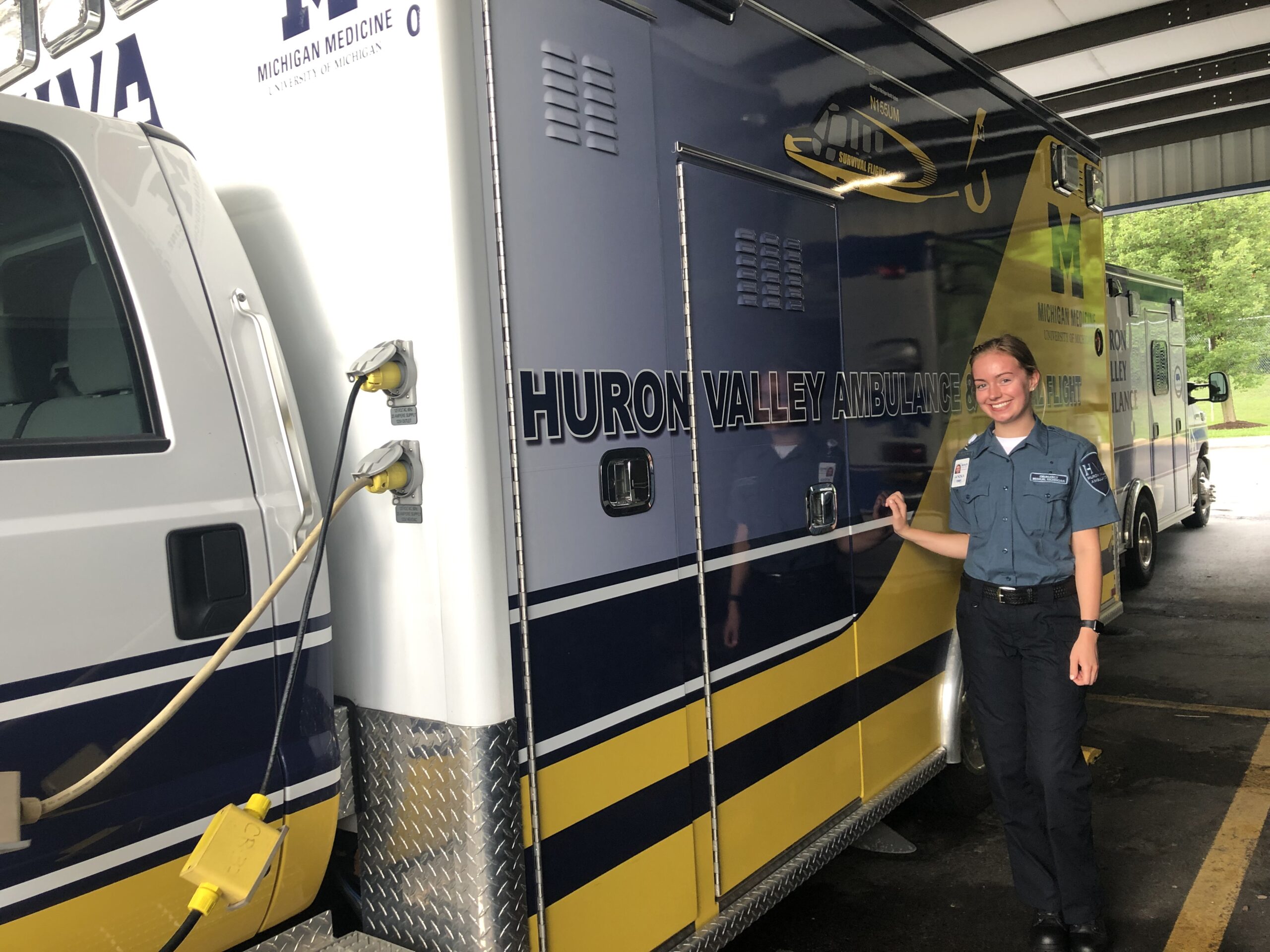 Anna Loughman, a neuroscience major at the University of Michigan, works part time as an EMT. Image credit: Anna Loughman

Titled “Hail to the Frontline Heroes,” the show includes performances of hits like The Beatles’ “Help!” and Tom Petty’s “I Won’t Back Down.” In between musical selections, the video features personalized thank you messages from band members to frontline health and service workers who have continued to provide relief during the pandemic.

“For our first virtual halftime show in the Michigan Marching Band’s history, we are proud to honor and thank the amazing women and men of the front lines and supply chain for their dedicated, selfless work and sacrifice within the most extreme of circumstances. Everyone involved are true, everyday heroes,” said John Pasquale, director of the Michigan marching and athletic bands and associate professor of conducting at the U-M School of Music, Theatre & Dance. 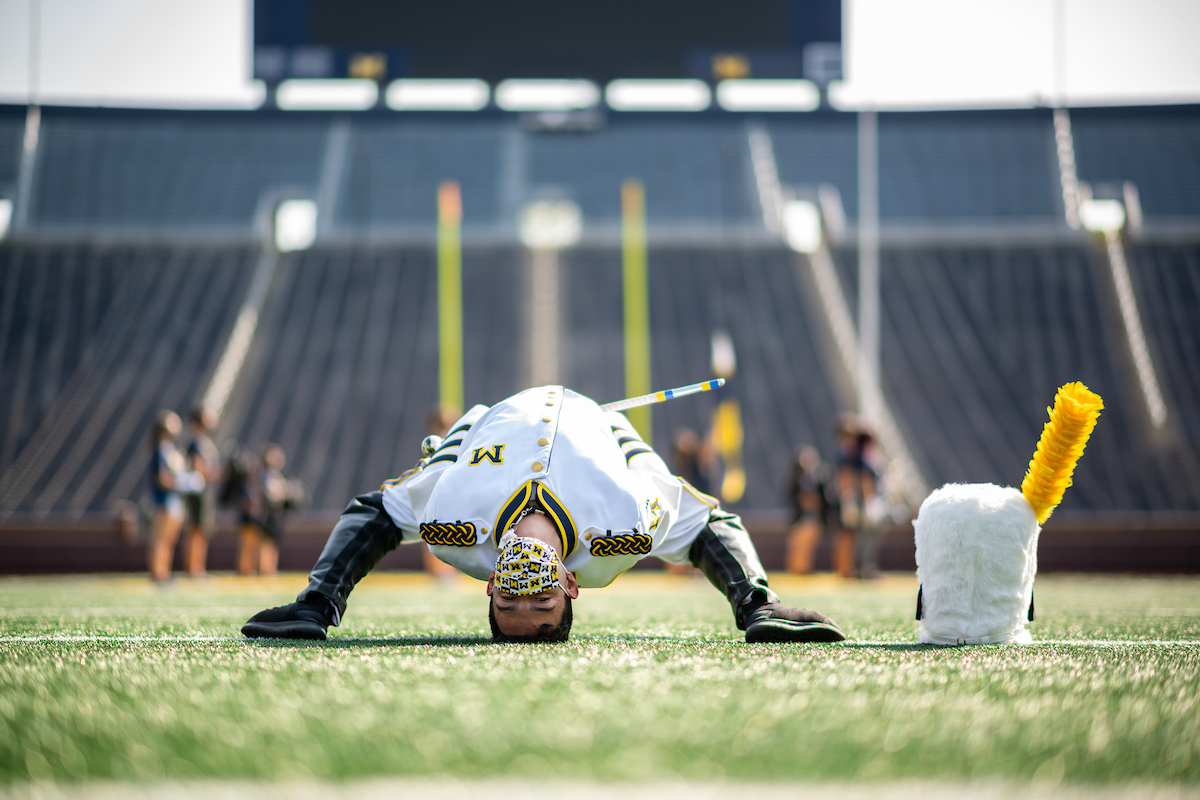 “This show is really personal,” said Walter Aguilar, the band’s 56th drum major. “We had a lot of freedom in how we were able to thank them. People from the band uploaded messages for the medical community, grocery store workers—anyone who’s been keeping us safe and provided for.”

Band members like Anna Loughman are among those being thanked. Loughman, a junior horn player, is both a pre-med student at U-M and an EMT. She started her job about six months before the pandemic struck in the U.S.

“We’ve been dealing with so many situations that we didn’t expect to be our day-to-day,” Loughman said. “I work part time, but there are so many health care workers working 12-hour days, five to six days a week. I’ve seen incredible strength and perseverance.”

The show is part of the band’s virtual season, and pulling it off required intense coordination. All 300 members sent in individual recordings for every song, following detailed directions on horn angles, sound and camera angle. The videos were aligned and merged for the final show. 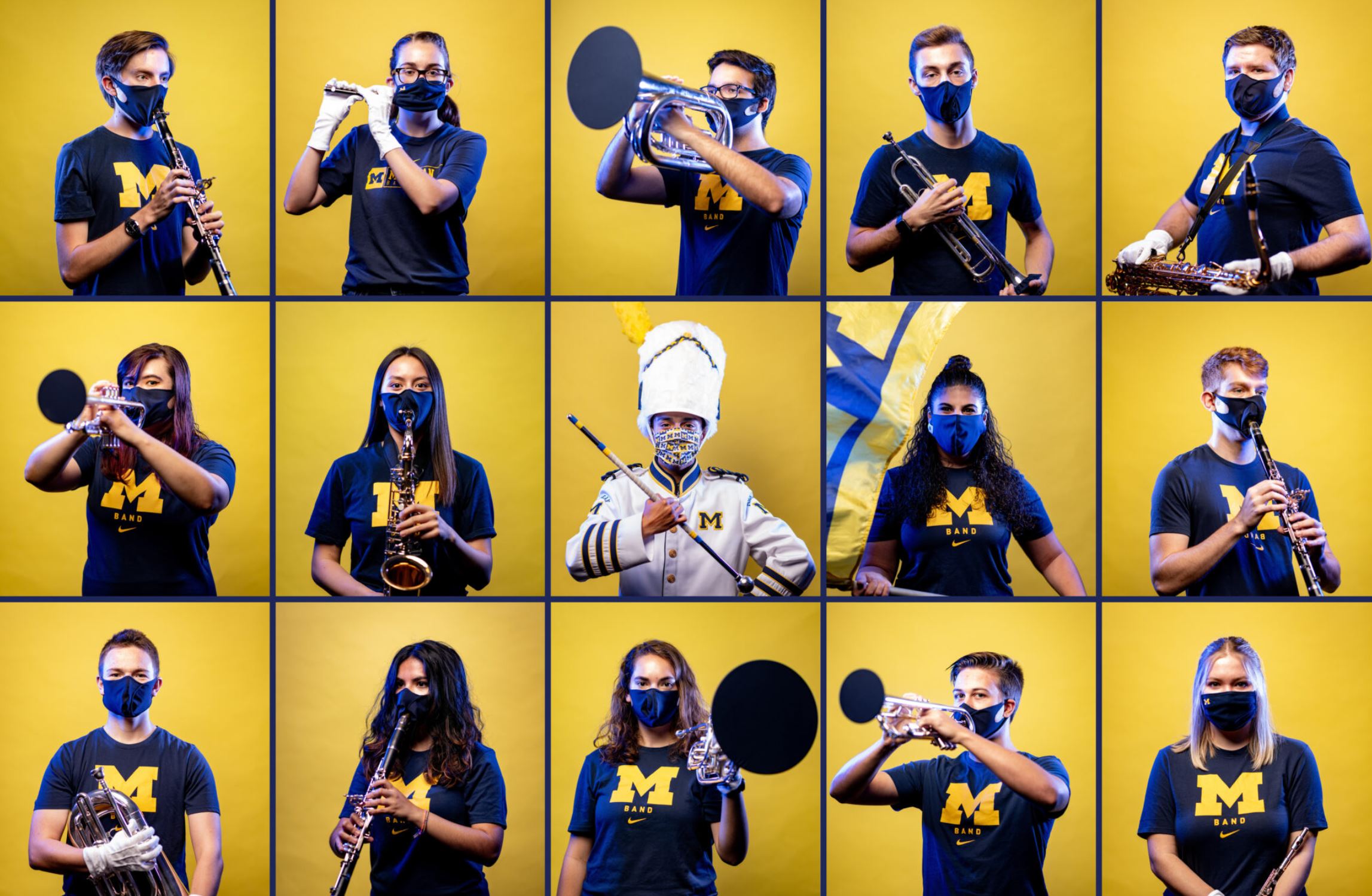 Consistency was critical. Band members used metronomes to keep tempo and had to start their videos the same way: after a series of “tweets” or vocal signals that are usually used on the field to echo the drum major’s whistle commands, signaling the start of a song.

In keeping to tradition, Aguilar will be featured in the video, contributing whistle commands and his signature Michigan backbend. He’ll also lead the first “Hail” to front-line workers.

The efforts to keep everything standardized led to a lot of trial and error says Brianna Marble, the section leader of the flag line. Adapting to a virtual setting impacted the ways they thought about their performance.

For example, because the Michigan marching band flags are tall, the entire section recorded vertically; however, since the rest of the band submitted horizontally, the flag section had to re-record everything from the beginning.

Marble is also responsible for the choreography behind the third song, a mashup of Eminem’s “I’m Not Afraid” and Mariah Carey’s “Hero.” The choreography includes tossing and catching the flags—something that under normal years isn’t allowed in Michigan Stadium.

“I couldn’t help adding it,” Marble said. “We rarely toss in the Big House so this is an exciting opportunity to do something new. When I was writing our moves, I wanted to consider different skill levels and recordability but also acknowledge that this season is different.”

For many, this first show is a way to come together during a largely isolated season and show united support for the people continuing to brave the pandemic.

“There’s so many messages tied to this show,” Aguilar said. “We’re sending messages of thanks and support to people all across the nation. And at the same time, we’re sending this message that, as a band, we’re still performing and putting in the work to build a season. We’re still here.”