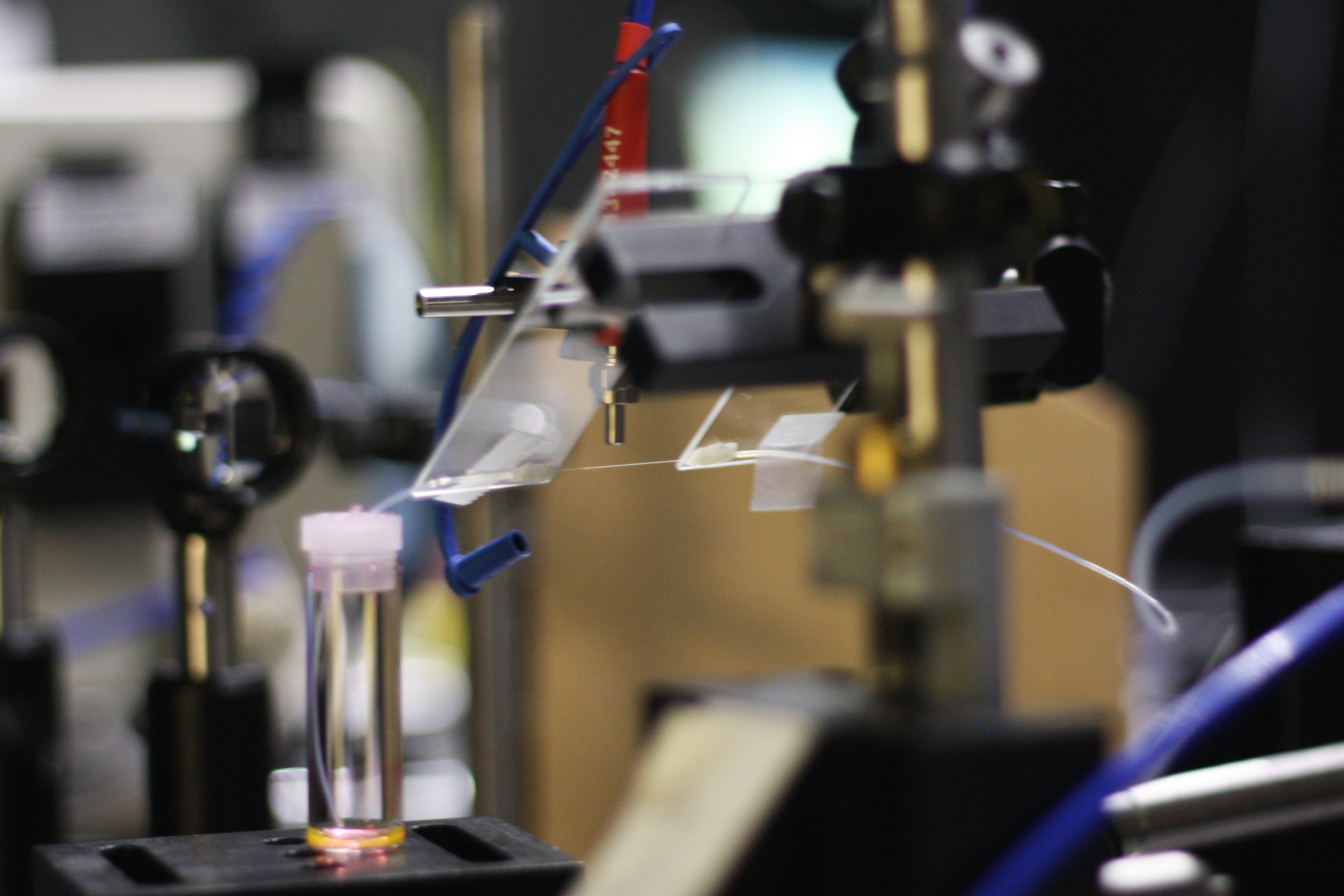 Using this liquid laser, University of Michigan Professor Xudong Fan has developed a highly sensitive technique for identifying mutated DNA that differs from healthy DNA by a single base. The fine white horizontal line is the capillary cavity that enables the laser to amplify the intrinsic difference in the light signals from healthy and mutated DNA. Image: Nicole Casal MooreANN ARBOR—Using a liquid laser, University of Michigan researchers have developed a better way to detect the slight genetic mutations that might predispose a person to a particular type of cancer or other diseases.

Their results are published in the current edition of the German journal Angewandte Chemie.

This work could advance understanding of the genetic basis of diseases. It also has applications in personalized medicine, which aims to target drugs and other therapies to individual patients based on a thorough knowledge of their genetic information.

The researchers say their technique works much better than the current approach, which uses fluorescent dye and other biological molecules to find and bind to mutated DNA strands. When a patrol molecule catches one of these rogues, it emits a fluorescent beacon. This might sound like a solid system, but it’s not perfect. The patrol molecules tend to bind to healthy DNA as well, giving off a background glow that is only slightly dimmer than a positive signal.

“Sometimes, we can fail to see the difference,” said Xudong Fan, an associate professor in the Department of Biomedical Engineering and principal investigator on the project. “If you cannot see the difference in signals, you could misdiagnose. The patient may have the mutated gene, but you wouldn’t detect it.” 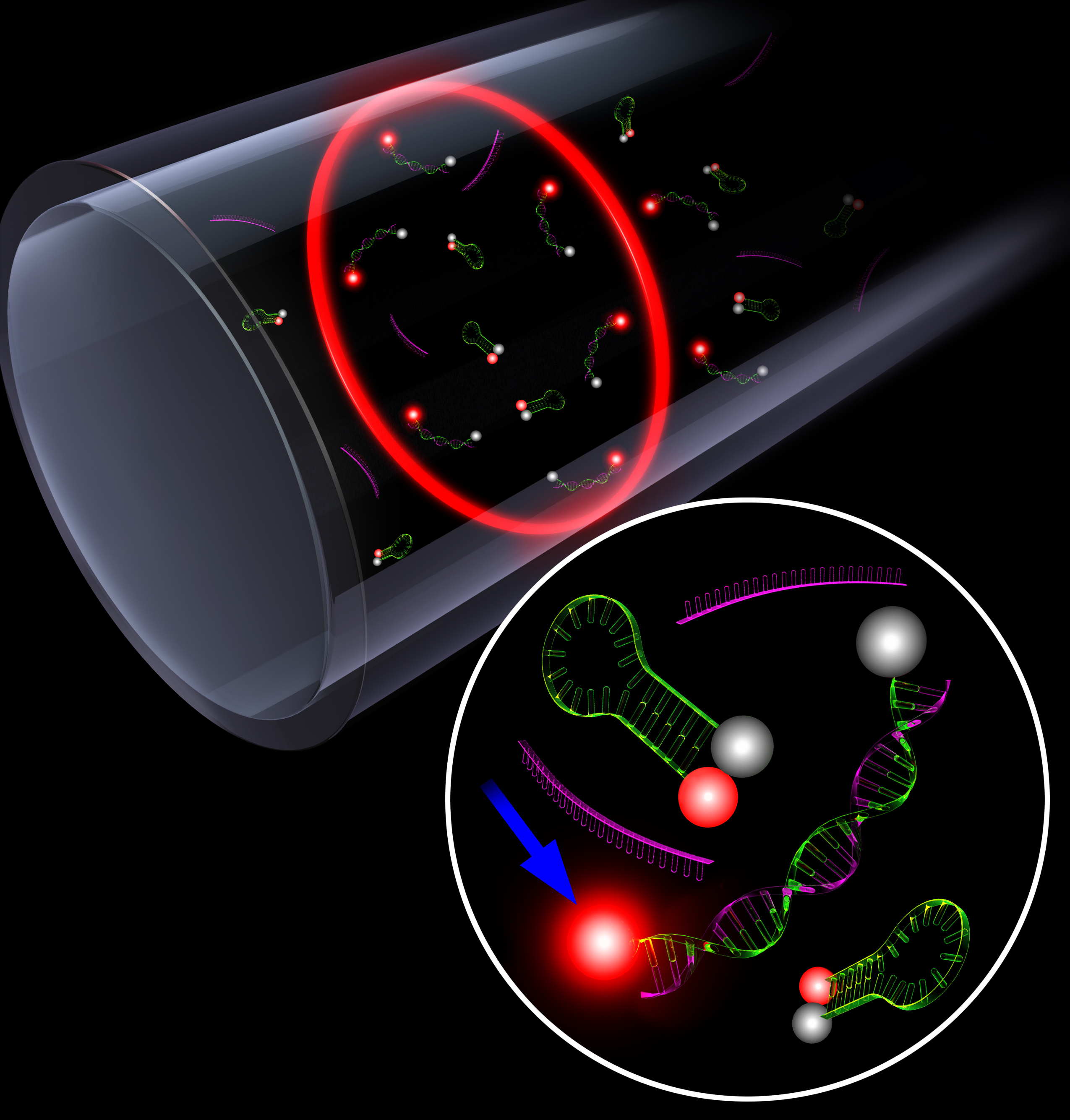 Researchers have developed a highly sensitive technique based on laser emission for differentiating a target DNA strand from strands that contain single base mismatches. Laser emission is used to amplify the small difference in signals that are generated by the different strands after they bind with a molecular beacon. The conversion is similar to analog-to-digital. Image: Christopher BurkeIn the conventional fluorescence technique, the signal from mutated DNA might be only a few tenths of a percent higher than the background noise. With Fan’s new approach it’s hundreds of times brighter.

“We found a clever way to amplify the intrinsic difference in the signals,” Fan said.

He did it with a bit of backtracking.

Liquid lasers, discovered in the late ’60s, amplify light by passing it through a dye, rather than a crystal, as solid-state lasers do. Fan, who works at the intersection of biomedical engineering and photonics, has been developing them for the past five years. In his unique set-up, the signal is amplified in a glass capillary called a “ring resonator cavity.”

Last year, Fan and his research group found that they could employ DNA (the blueprints for life that reside in all cells) to modulate a liquid laser, or turn it on and off. His group is one of just a few in the world to accomplish this, Fan said. At the time, they didn’t have a practical application in mind. Then they had an epiphany.

“We thought, ‘Let’s look at the laser output. Can we see what’s causing the different outputs and use it to detect differences in the DNA?'” Fan said. “I had an intuition, and it turns out the output difference was huge.”

The journal editors named this a “hot paper” that “advances knowledge in a rapidly evolving field of high current interest.”

The paper is titled “Distinguishing DNA by Analog-to-Digital-like Conversion by Using Optofluidic Lasers.” The research was funded by the National Science Foundation. The first author is Yuze Sun, a doctoral student in the Department of Biomedical Engineering. The university is pursuing patent protection for the intellectual property, and is seeking commercialization partners to help bring the technology to market.